Off to a Great Start 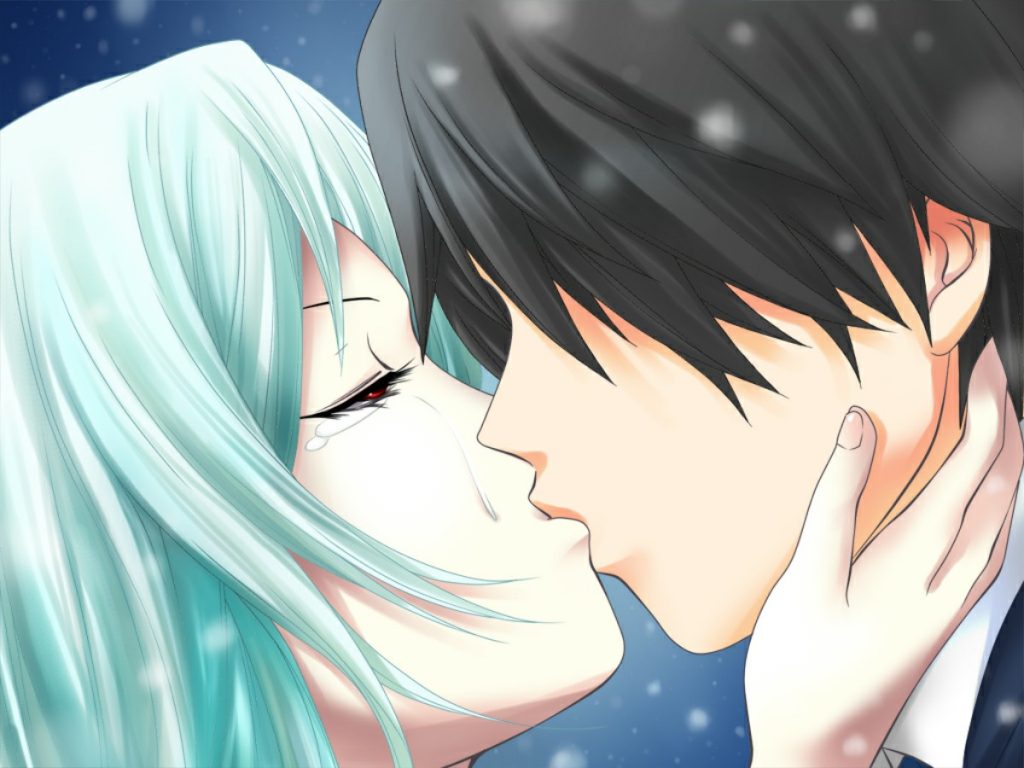 Visual novels are always so much to play… er… read through, and I feel like that’s because they’ve never steered me entirely wrong. Regardless of factors like length, genre, and even when it was published initially, each visual novel that I’ve had the pleasure of diving into has always left me feeling very fulfilled and satisfied. I am, of course, aware that there are bad visual novels out there, and I’m sure that in some ways, it would be kind of fun to talk about an experience with a bad VN game. It doesn’t look like that’s going to be happening today, though. After all, I’d have to actually play a bad VN game before I talk about it. And Forgotten Trace: Thanatos in Nostalgia? Well, it’s as great as all of the rest of them—even if it’s only technically one-third of the entire story. 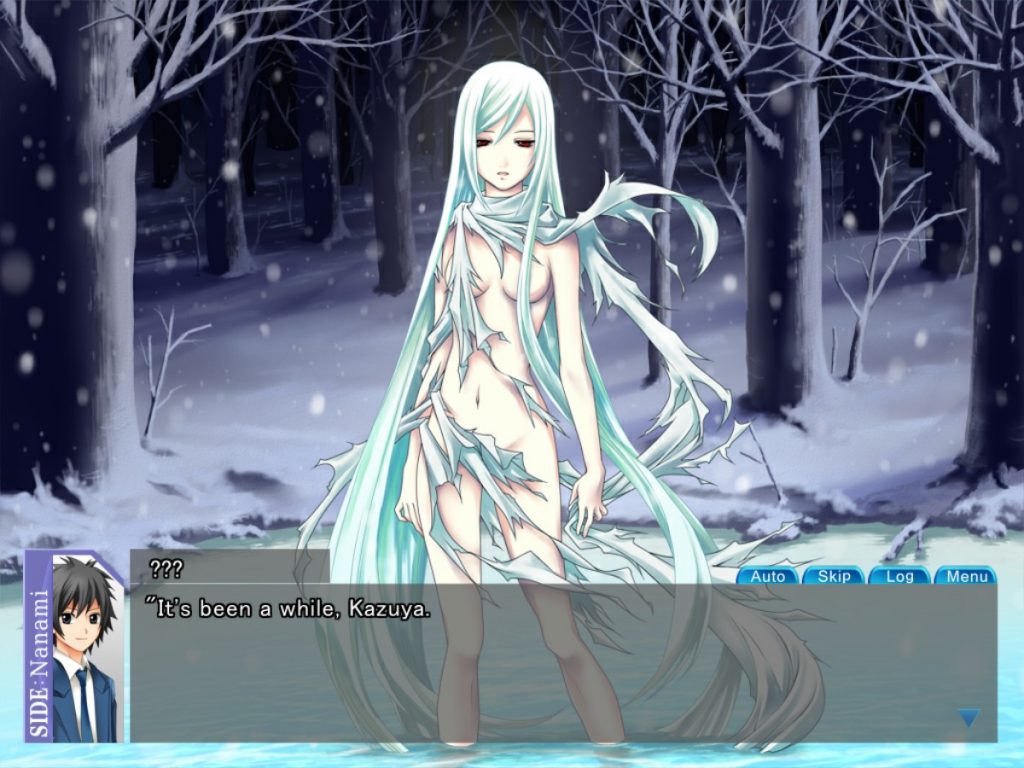 Were you waiting for me this entire time? Aren’t you, like, freezing out here?

Forgotten Trace follows the story of Kazuya Nanami, a boy who, throughout most of his high school career, had everything going for him. Between having his childhood friends Rei and Ibuki at his side, his unparalleled soccer skills that helped take his team all the way to the top, and a level of confidence so unshakably high that he unironically referred to himself as the “main character of his school,” Kazuya’s future was looking exceptionally bright—all up until he sustained an injury during his soccer team’s final game which, alongside guaranteeing his team a loss, made his whole world come crashing down. His knee damaged beyond repair, Kazuya spent the next year wallowing in depression and self-pity. But things were once again going to change for Kazuya who, upon meeting a strange woman in his dreams, found himself slowly being pushed into a fantastical-yet-terrifying life-and-death struggle beyond his wildest dreams.

It might have seemed like everything that you just read was a narrative setup that would help to pace the rest of the story. And it was. But it also kind of… wasn’t? You see, Forgotten Trace isn’t a full story (although I’m sure you got that based on the fact that it had “Part 1” in its name)—it’s one-third of a story. Because of that, everything kind of feels like a setup. Now, I’m sure that you could argue against the game because of this fact; after all, playing through an entire game only for it to stop immediately after it starts can be kind of frustrating. And, yeah, it kind of is in a way. But I would argue that that also works in the game’s favor. 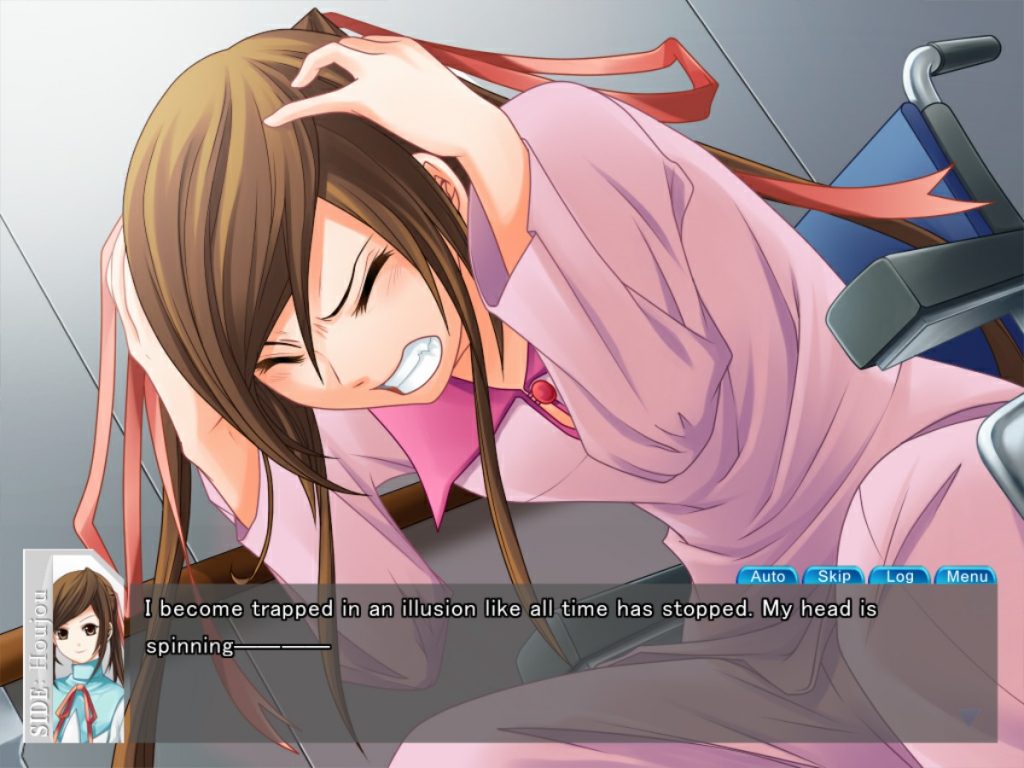 Just because the story’s getting started doesn’t mean that there’s not already a lot going on!

The fact that Forgotten Trace puts the entirety of its narrative focus into setting things up allows it to do some pretty neat things in terms of characterization. Not only does this method give players ample time to familiarize themselves with and start to identify themselves as Kazuya (something which is highly important in VNs), but it also allows readers to take an extended look at the game’s supporting characters—and even certain antagonists—as well. The most easily identifiable example of this comes in with Madoka Houjou—a girl who, much like Kazuya, finds herself sinking into the depths of despair. Despite being what appears to be a supporting character (I’m aware that this is subject to change), a good chunk of this game’s narrative follows Madoka, allowing players to truly get a sense of who she is. Not only is this good because, you know, it’s nice to learn things about characters, but it also makes the gravity of the situation surrounding her story arc so much more impactful than it would otherwise be.

All Roads Lead to Rome 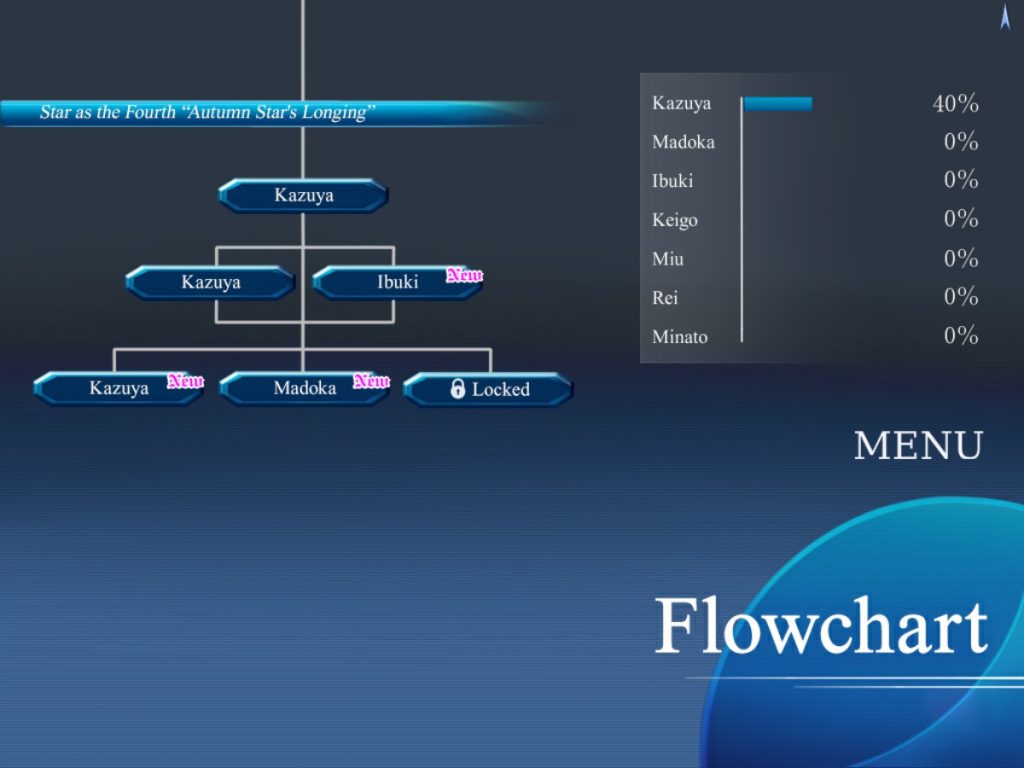 The only thing that I’m not completely sold on when it comes to this game is the way it handles decision-making. Or, rather, the fact that there basically isn’t any decision-making. Now, I’m sure that we all know that about 95% of a visual novel is just you reading the text on-screen; but that doesn’t mean that the remaining 5% isn’t important! Part of the fun of a visual novel is having choices thrown at you. Or, rather, choices that directly relate to how the story plays out. And, while Forgotten Trace does give players a handful of choices, they don’t actually matter. Now, just this once, I’m going to let this slide. I get that, because this is the beginning of the story, you can’t have too much wiggle room. Big decisions don’t normally happen until later on in a VN, and there’s really no “later on” in this one. This is really the only time that I’m willing to do this, though; it’s going to be a bit of a problem if a lack of decision-making permeates throughout the entire trilogy.

In lieu of traditional decision-making elements, Forgotten Trace has a flowchart. And, while the flowchart doesn’t actually do much during the first three sections of the game, it’s really neat during the final section. Alongside giving players a visual representation of which events occur when the Flowchart also allows players to do something that many VNs don’t; let you see certain scenarios from multiple vantage points. While this does result in said parts of the story repeating itself, the ability to see what each character is thinking during a particular scenario grants you an incredibly unique perspective on things. Admittedly, the Flowchart mechanic does appear to be in its infancy stages throughout the duration of this game, but I’m looking forward to seeing where things go in future titles.

All-in-all, Forgotten Trace: Thanatos in Nostalgia is a really great beginning to what seems to be a very interesting story. By focusing on a lengthy but very much enticing setup, Forgotten Trace, has the ability to quickly and skillfully draw its players into Kazuya’s world, and provides plenty of material that I assume will allow the story to continue to become even more exciting than it already is. If the rest of the story is done as well as this part is, I think that players (as well as myself!) will have plenty to look forward to in the (hopefully near) future.

Dancing in the streets! A conversion of the 1988 the Tad Corporation coin-op of the same name, Cabal came out at a time when this style of shooting game…