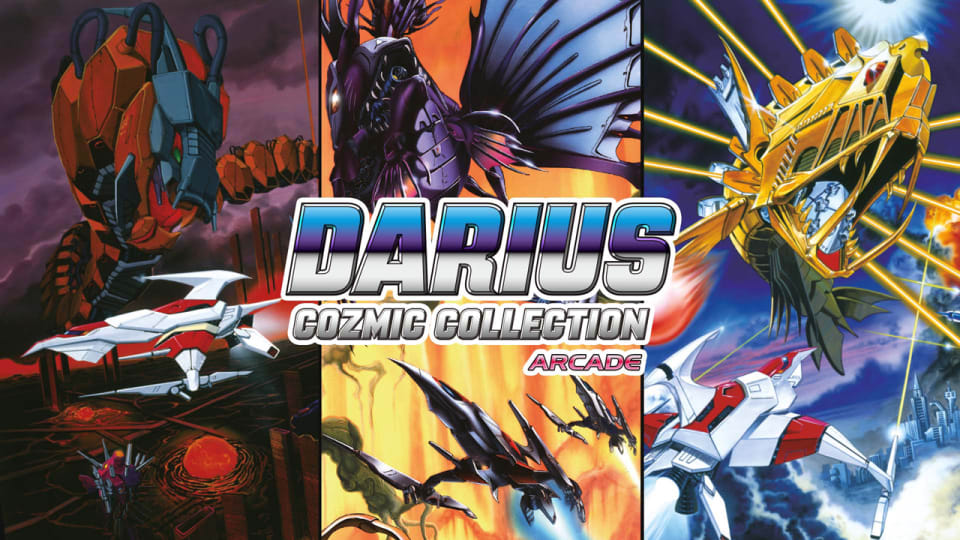 The Nintendo Switch has become something of a haven for retro gaming. This is thanks in no small part the efforts of studios like Hamster and M2, which have shown a knack for bringing superb ports of games from the arcades and classic consoles to modern platforms with their SEGA AGES, Arcade Archives, and ACA NEOGEO offerings.

Darius Cozmic Collection Arcade is yet another example of M2’s commitment to keeping the retro flame burning bright on Nintendo’s hybrid console. It’s a compilation featuring seven various coin-op versions of three of Japanese developer Taito’s long-running space shooter series. Darius, Darius II (also known as SAGAIA in Japan), and Darius Gaiden are all included in the collection, along with three slightly tweaked and balanced versions of the first two games. With spot-on emulation and a lean challenge, it’s a bundle that fans of the series won’t want to miss – so long as you plan on playing it on the big screen. 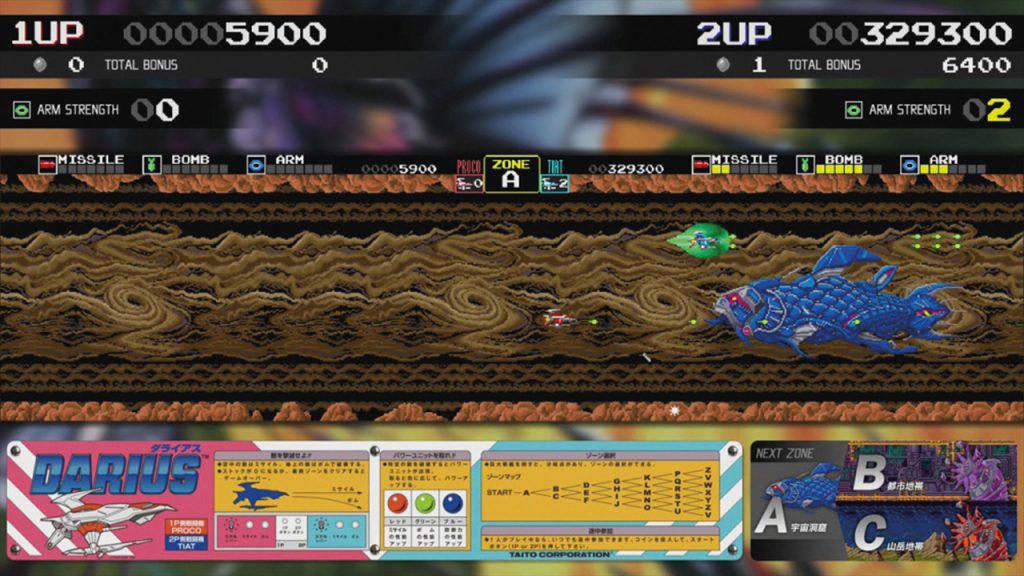 Darius’ widescreen effect is impressive, but it can make keeping track of what’s going on very challenging – especially in handheld mode.

As far as horizontal shooters go, Darius’ formula doesn’t differ much from the other popular shooters of the late 1980s like Gradius and R-Type. You fly your ship, the Silver Hawk, through massive caverns and alien landscapes to do battle with waves of hostile ships and crazy boss creatures inspired by marine life. One button fires your standard missiles that fire horizontally, and a second button lobs bombs, which can wipe out targets on the ground or, once you upgrade them with power-ups collected from specific enemies, the ceiling.

What made Darius stand out from its coin-op contemporaries was the game’s cabinet itself. It was a beast of a machine, housing three side-by-side monitors to create an ultra-wide display. Back in 1987, this impressive effect made the cabinet quite a showpiece for arcades that could afford it. Obviously, before the birth of modern widescreen displays, replicating this effect at home was pretty much impossible. Of course, that’s no longer the case now, and Darius Cozmic Collection Arcade does a fantastic job of replicating the feel of the original game when played on the big screen.

Playing the original Darius and its two updates, Darius New Version and Darius Extra Version on my 86″ TV was a bit overwhelming at first. Your ship is minuscule compared to the vast landscapes and desolate caves that seem to stretch on forever, which can make it pretty hard to keep track of what’s going on. Making matters worse, the enemy bullets are tiny and often blend in with the backgrounds, which can lead to some frustrating moments.

As you can imagine, this is much more of an issue when played in handheld mode, as the playfield is little more than a narrow bar sandwiched between two massive borders that display information such as the upcoming zones, bosses, and controls (in Japanese, of course). 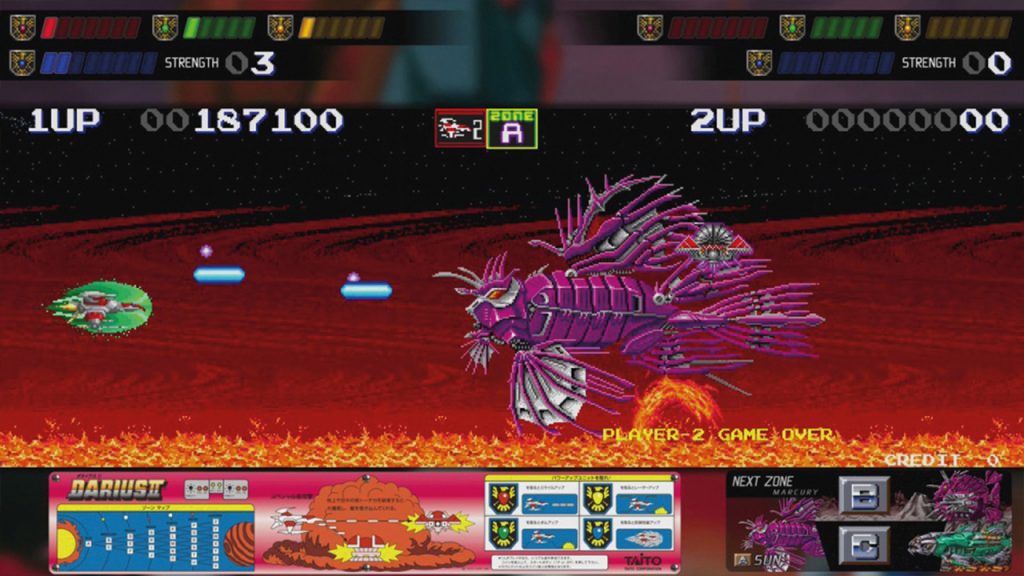 Shoot the bomb that appears to send this fiendish fish straight to the chum bucket.

Released two years later, Darius II is a substantial improvement over its predecessor. This sequel reduced the number of displays down to two horizontal screens, which makes the on-screen action considerably easier to follow this time around. The richly detailed enemy sprites and vibrant stage designs feature cool effects like warping backgrounds and other visual flourishes that help bring them to life.

Of course, Darius II’s slick presentation isn’t the only area where it surpasses the original release. Flying the Silver Hawk just feels much snappier and more responsive. Add to this an excellent cooperative mode, and you have a sequel that manages to check all of the boxes.

But that’s not to say Darius II is perfect. Remember, this is an arcade game we’re talking about here. And, as such, it’s designed first and foremost to gobble your precious quarters with extreme prejudice. As someone who collects and plays a lot of arcade games, this is a concept that doesn’t usually bother me. However, the way Darius II goes about challenging the player can be more frustrating than fun.

Unlike its contemporaries like Thunder Force, Gradius, and R-Type, which feature well-designed enemy shot and ship patterns to test players’ skills, Darius II instead opts to overwhelm players with sheer chaos. The game moves at a lightning-fast pace, all the while flooding the screen with dozens of enemy sprites and bullets that appear out of nowhere with no rhyme or reason, leaving you with virtually no time to move your massive hitbox out of the way of the incoming carnage.

Still, Darius II will keep you coming back for more thanks to its awesome boss designs and infectious music. It’s just hard to imagine many players seeing their way to the finale without having to dump a few hundred credits into the game. It’s also worth noting that the other versions of the game, SAGAIA versions 1 & 2, are virtually identical to Darius II, which gives you little incentive to experience them once you finally manage to topple Darius II’s big baddy. 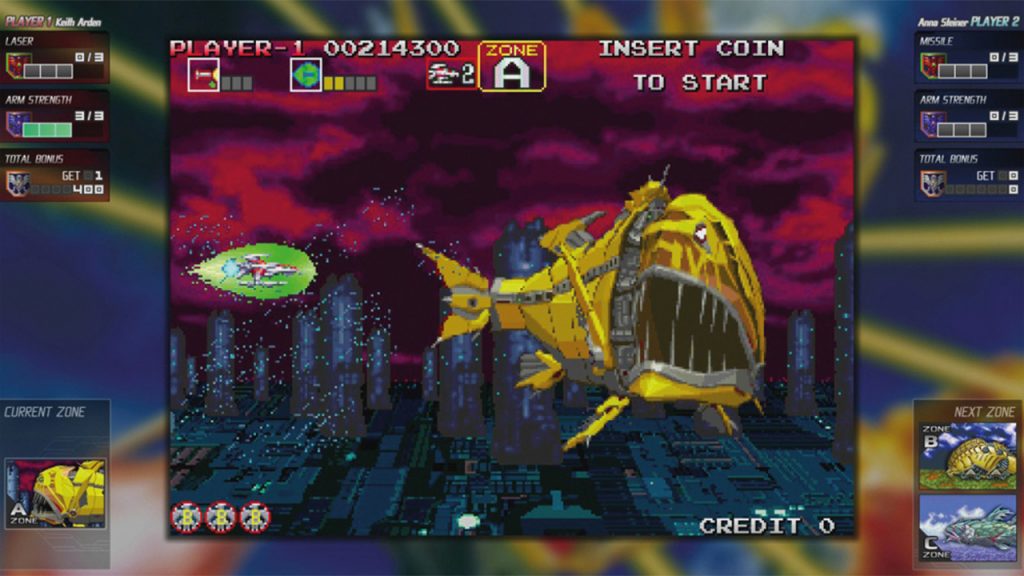 A massive evolution for the series, Darius Gaiden is easily the star of the show.

Capping off Darius Cozmic Collection Arcade is Darius Gaiden. This stellar shooter is a significant evolution for the series, featuring a host of refinements to help it stand out from the pack. Released in 1994 at the dawn of the 32-bit era, it introduces lush graphical overhaul with its 2.5D visuals, pumping soundtrack filled with haunting vocal arrangements, and a wealth of new weapons that make the moment-to-moment gameplay so much more satisfying. Hell, you even get screen-clearing black hole bombs and assimilate mini-bosses to make use of their abilities. How’s that for an update?

Honestly, Darius Gaiden is such a substantial update to the original games that it’d be easy to confuse it for another series altogether. If it weren’t for all the hostile sea life attempting to reduce my nimble Silver Hawk to space dust, I would have thought I was playing Pulstar or Blazing Star on the Neo Geo. Admittedly, Darius Gaiden’s radical departure from previous series conventions may make it a somewhat divisive release among fans. As for me, I couldn’t be happier with the way it managed to shake things up and breathe fresh life into the franchise.

Lastly, Darius Gaiden is also the most accessible game in this compilation to enjoy in the Switch’s handheld mode thanks to its reduced aspect ratio, which dials things down to a very manageable 4:3 play area.

Put Your Quarters Up

If you’re a fan of classic arcade shoot-’em-ups, Darius Cozmic Collection Arcade is easily worth the price of admission. However, it’s worth noting that Darius and its two revisions are all but unplayable in handheld mode for those of us with mere mortal eyes, which means those with a Switch Lite likely won’t be able to enjoy a substantial chunk of this compilation. Unlike other M2 releases, it’s also a very lean offering that’s pretty much devoid of bonus content, save for the usual bells and whistles like save stages and display and filtering options. Unlockable galleries or other goodies would have gone a long way towards spicing things up.

Still, despite its no-frills presentation, at just $35, it’s hard to complain too much about what you’re getting in this package. Darius Cozmic Collection Arcade is a great little throwback to the glory days of arcade gaming. If you’re a fan of the franchise who wants to experience its coin-op roots, you won’t be disappointed with this compilation. 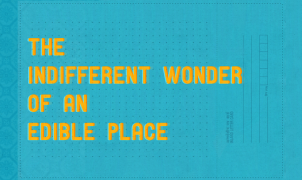 A short game with a long history “In my country, history itself is edible. Time masticated into tales, people digested into stories. Places leak mineral flavor. Buildings are grated…