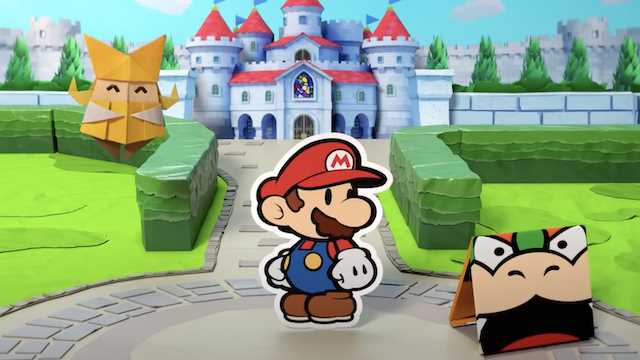 Paper Mario‘s evolution — or “de-evolution”, depending on which Nintendo fan you’re talking to — has been a touchy subject over the past decade: some appreciate developer Intelligent Systems’ efforts in reinvention, but many desire for a return to the series’ roots: beginner-friendly RPGs playfully exploiting Super Mario lore. (What, didn’t you know Goombas had lives outside of getting trounced by Mario?) Alas, as evidenced by the latest entry in Paper Mario: The Origami King, Intelligent Systems remains steadfast to their adventure-style direction. In this VideoGamesChronicle interview, series producer Kensuke Tanabe joins game director Masahiko Nagaya and Nintendo EPD Assistant Producer Risa Tabata to wax upon their design philosophy. While Mr. Tanabe acknowledges the difficulty of appealing to RPG fans, he remains hopeful they’ll approach The Origami King with an open mind.

“I do look through the opinions of fans once a game is released. As there are cases where I can’t address those opinions exactly as fans want, I try to challenge myself to other new, fun ideas. What I always keep in mind though is to do as much as I can so that players can enjoy new and unique game experiences. I’m confident that if you play Paper Mario: The Origami King, you’ll understand just how many ideas we’ve managed to pack into one game,” Tanabe elaborates.

Expanding on this point, Ms. Tabata reveals the drive for new frontiers hails from advice granted by the Father of Mario himself: Shigeru Miyamoto. (“Challenge yourself to create new gameplay”, he once said.) “Games are entertainment,” she explains, “so I want the people who play our games to say “Wow!” My understanding is that if we want to give players these positive surprises, we can’t do exactly the same thing that’s been done before.”

An oft-criticized feature of newer Paper Mario games involves more homogenized casts of familiar Mario NPCs rather than a lively blend of liberal interpretations and original creations; sadly, corporate mandates overseeing Mario and the gang might have Intelligent Systems walking a fine line. “Since Paper Mario: Sticker Star, it’s no longer possible to modify Mario characters or to create original characters that touch on the Mario universe. That means that if we aren’t using Mario characters for bosses, we need to create original characters with designs that don’t involve the Mario universe at all, like we’ve done with Olly and the stationery bosses.”

Citing Wii’s Super Paper Mario as an example of straying too far from the established Mario world, he’s since restricted himself from complicated yarns and emphasized “memorable events”, although he believes The Origami King has a strong cast that’ll resonate with players. (“In particular, I think that Bobby (Bob-omb) has turned out to be just as memorable a character as Olivia [Mario’s new helper].”

There’s plenty more to the interview — not the least in the game’s inspiration surrounding origami/confetti, fun Nintendo cameos, and The Origami King‘s usage of Switch hardware — so we suggest hitting up VGC to read Tanabe and co.’s full comments. With tomorrow’s release greeted with divisive trepidation, what side of the aisle do you find yourself on? Does The Origami King‘s ring battle system look like a swell ol’ time in spite of abandoning the series’ origins, or does Intelligent Systems remain out-of-touch? Yours truly has plenty to say about the latter, but we’ll let you, the reader, decide.