This Creepy Tale certainly is Grimm… 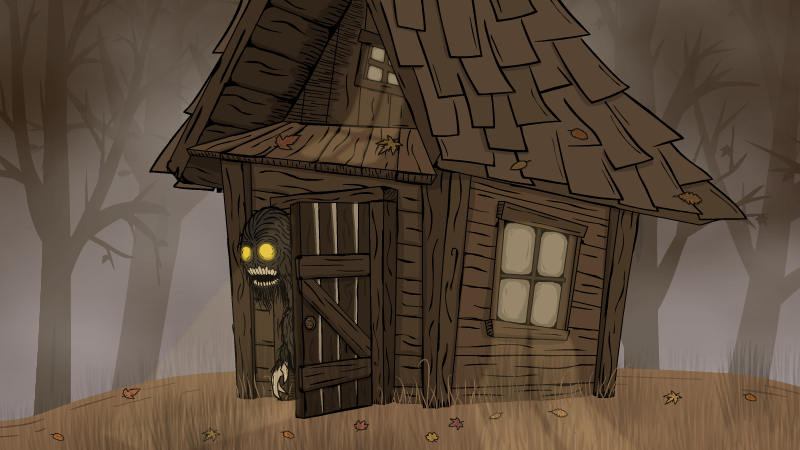 I love them — really, I do — but I am too big a coward to ever actually play them myself. If a horror game interests me at all (P.T., I’m looking at you), I have to watch YouTubers like Markiplier brave the pixelated territory for me, watching behind my fingers covering my eyes. I am not sure what it is, I’m just never going to be able to get the courage to play them, content to watch others scream instead.

So when Creepy Tale landed in our review inbox, I was skeptical that I’d be able to play the tiny terror title. Sure, it doesn’t come off as scary, but Neverending Nightmares didn’t look all that scary either, yet I’m still fairly traumatized by that scene with the arm (if you know, you know). Was it going to be a truly terrifying tale, or would it live up to its name and simply be “creepy?” 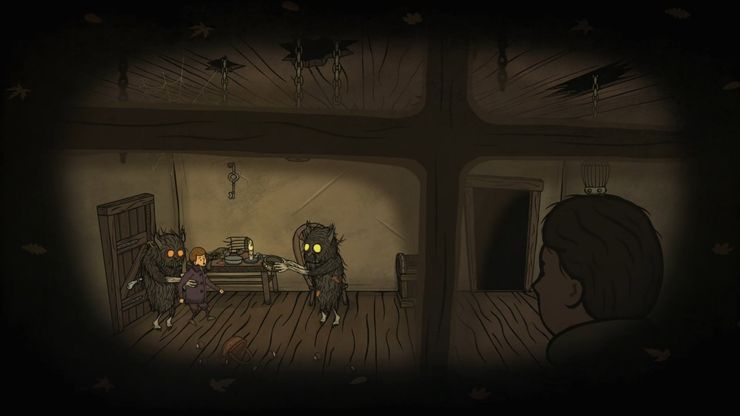 Developed by Deqaf Studio and published by No Gravity Games, Creepy Tale follows the story of two brothers collecting mushrooms in the woods (like one does with their brother). The duo spot a pretty magical-looking butterfly, one brother absolutely captivated by it. He follows the butterfly into a small cabin, the door slamming behind him. The brother left behind peers into the window and watches in horror as two terrible creatures force the ensnared boy to wear a collar, then drag him off into parts unknown. Players take control of the remaining boy, who must find a way to free his brother while somehow avoiding capture himself. 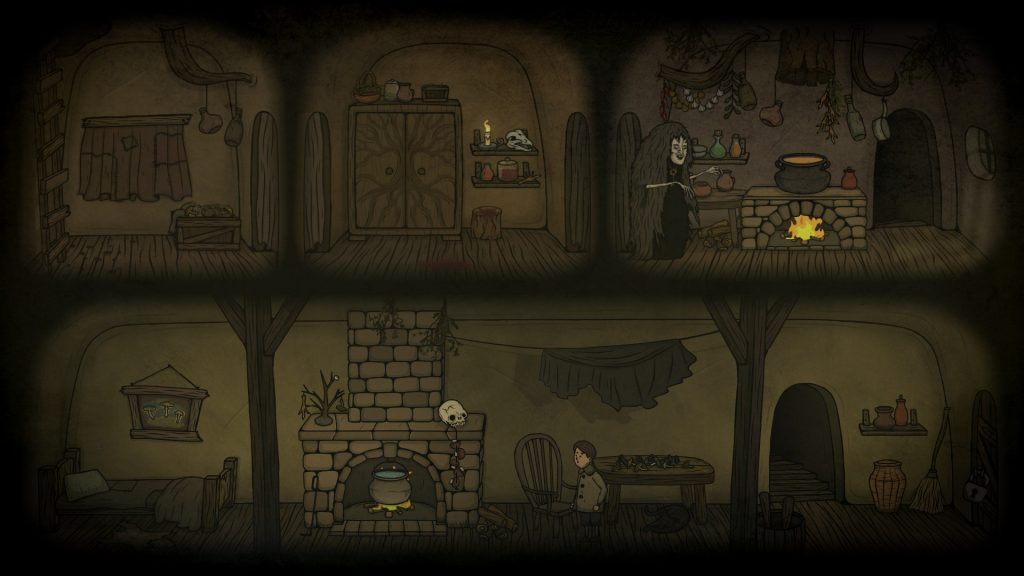 If Creepy Tale is sounding a little bit like it came from Grimm’s Fairy Tales, that’s exactly what it feels like, and the elements are delightfully strong here. This is certainly not a scary title by today’s gaming standards, but for fans of more traditional Western children’s stories, it’s definitely like you’re playing one. With hooded figures watching you from the shadows, witches brewing potions in hidden huts, and magical trees who can fight off trespassers, I felt like I had dusted off a copy of forgotten European folk tales and popped it into my Switch. In this sense, it’s a great “horror” game for people who can’t handle horror, for fans of Grimm’s Fairy Tales, or if a young child is taking interest in the genre but doesn’t know where to start. 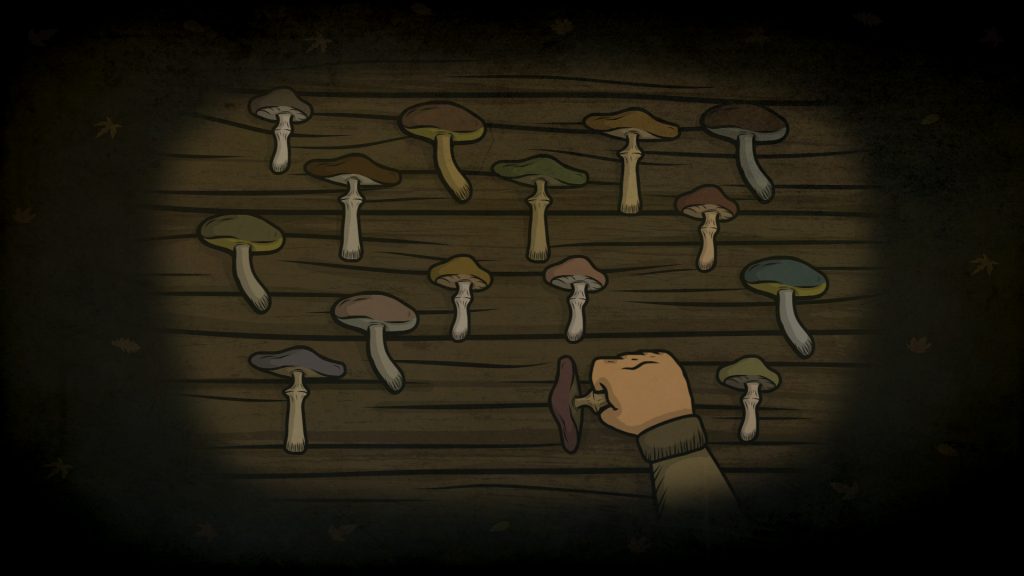 Don’t let my downplaying the horror lull you into a false sense of security — Creepy Tale is indeed unsettling. There may not be true jumpscares, but there are enough things that go bump in the woods to remind you that someone is always watching. The hand-drawn characters and environments make this feel like a children’s storybook, transporting players back to a time when fear resembled what possibly lurked under the bed or in the closet. The ending is anything but a childish horror, however; my mouth was left agape at what I saw, making those fairy tales seem even more grim than before. 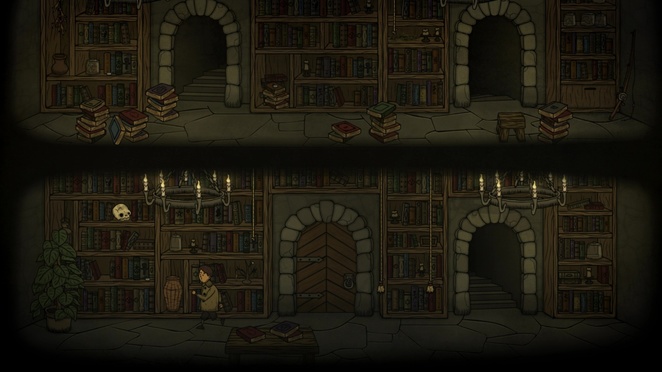 Controls are simple — use the joystick to move around, the “B” button to jump, the “Y” button to interact with object, and the “X” button to perform special commands. Nothing sticks and everything is pretty fluid. As it is an action/puzzle game with point and click elements, Creepy Tale’s puzzles are an important feature, and while the developer does a great job of funneling players to specific puzzle areas, the items themselves don’t totally stick out, making it hard to figure out what to do next. The very first puzzle — placing a mushroom on a stump — literally had me dying repeatedly until I understood I could interact with something that appeared to be a background feature. From the get-go, puzzles were going to be a problem in Creepy Tale. 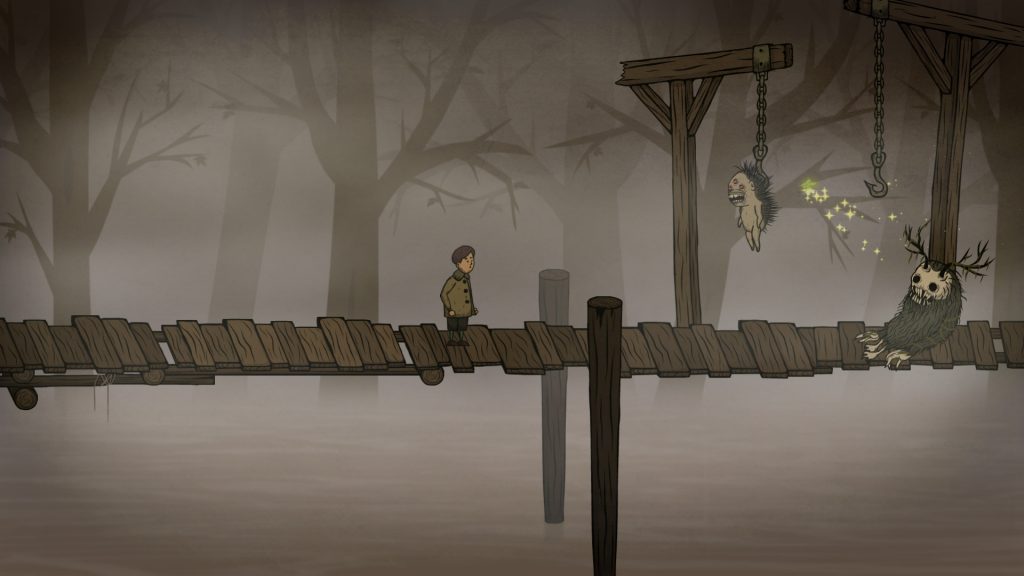 I wish I could say the puzzles got easier to understand as time went on, but unfortunately everything was a little too hard to pick apart. And while making it too easy would be hand-holding, I just never got the feeling of figuring things out for myself with Creepy Tale. The design choices for puzzles in general gave me Machinarium or Limbo vibes in the design — dated, as if it sat in a vault for 10 years before anyone noticed and hurriedly released the title. And while being like those games is a compliment, they also had their flaws which other titles have built upon since then; Creepy Tale, in comparison, felt more a clone and less a love letter.

Creepy Tale hearkens back to a time when scary meant something else entirely and modern indie game design was still coming into its own. The story flows wonderfully and is easy enough to follow; it’s only hampered by odd puzzle design and choices. Still, I’d recommend Creepy Tale, as its hand-drawn graphics lend perfectly to the narrative it wants to tell. If you’re a fan of Grimm’s Fairy Tales and puzzling puzzlers, give Creepy Tale a chance, as it’s certainly worth the price of admission.

Full disclosure: This review is based on a Switch review copy of Creepy Tale provided by the publisher. 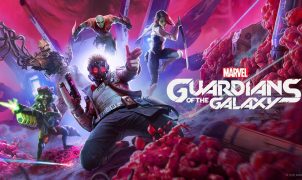