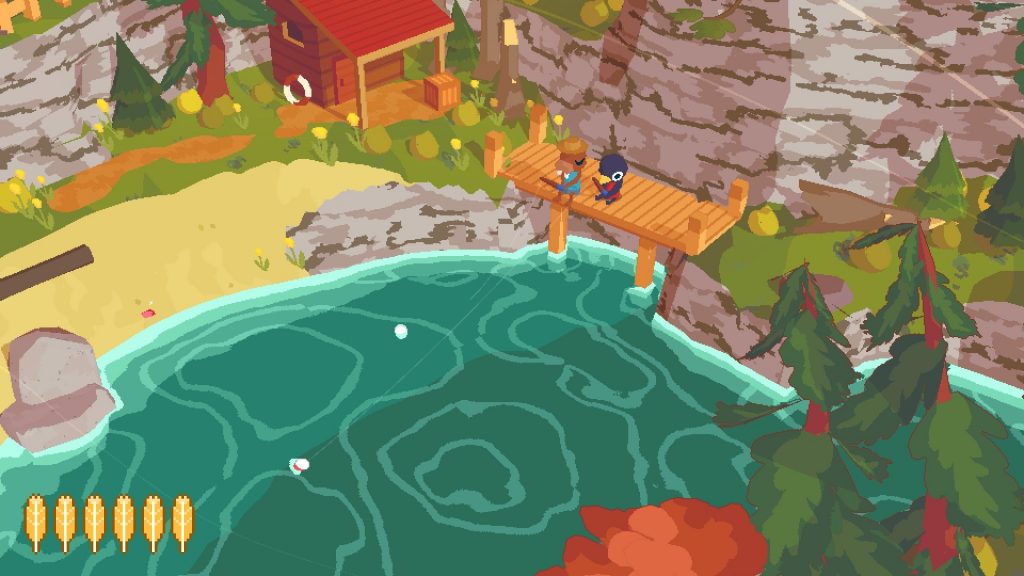 2020 has been bad on the outside for pretty much everyone; on the inside, it’s been good to gamers — specifically our backlogs. As the weeks drag on though, it’s been getting harder and harder for me to pick up something that doesn’t spark joy, or at least elevate the mood. It seemed like a no-brainer, then, to finally pick up A Short Hike and see why one of my colleagues felt it was GOTY 2019 material (spoiler alert: she was totally right).

Developed and self-published by Adam Robinson-Yu, A Short Hike follows Claire, a young blue bird who was brought along to a lovely island by her ranger aunt May in an attempt to allow Claire to relax. All seems to be going well until Claire realizes she is unable to get cell phone reception in the ranger cabin; luckily, May is confident Claire can make calls at the island’s summit, Hawk Peak. All Claire will need to do is climb to the top — “a short hike,” she calls it (see what they did there?). 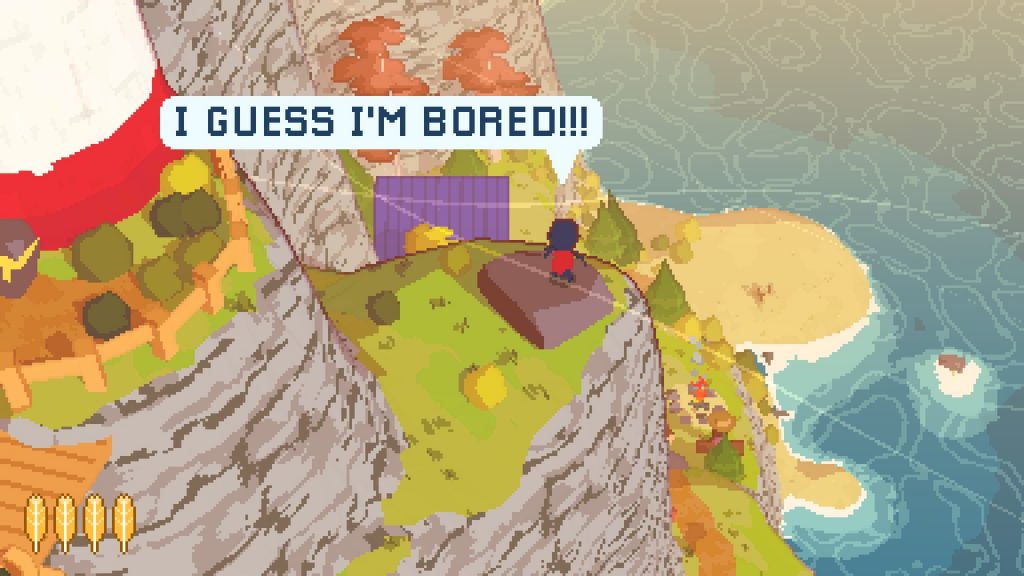 Controls in A Short Hike aren’t immediately intuitive, but are a nice change of pace from other games. Arrow keys control directional movement, while “z” is jump, “x” uses an item, “c” sprints (after collecting the running shoes) and space bar brings up items to equip. It is possible to use the mouse to slightly manipulate the camera, but I ended up just unplugging mine from my laptop in an attempt to force myself not to reach for it out of habit.

A Short Hike’s aesthetics are absolutely divine. The colors are cheerful — bright, yet not overwhelmingly so — while still feeling soothing to the eyes. I enjoyed the low poly graphics and thought it made the game feel youthful. The music, composed by Mark Sparling, was gentle and ambient — energizing where necessary, yet in the way one feels after a long, restful sleep, ready challenge the day bright-eyed and bushy-tailed. Visually and audibly, A Short Hike achieved perfection. 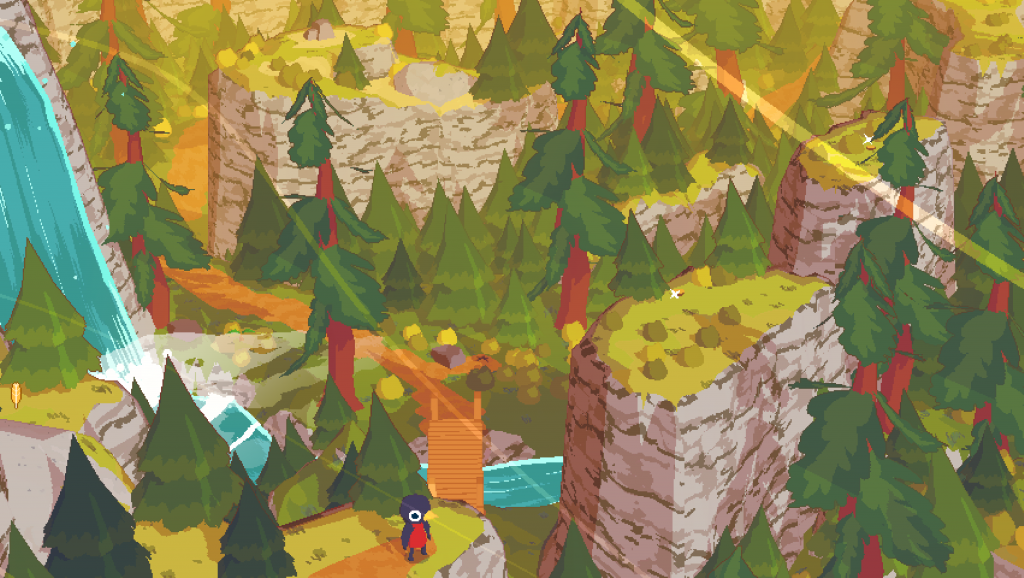 When it comes to story-telling, A Short Hike is incredibly straight-forward — you need to make a call, so get to the top. Easier said than done, unfortunately, as climbing (and, in your case, flying) requires golden feathers that serve as a stamina bar for upwards mobility. Getting to the top will require golden feathers, and getting golden feathers requires adventuring around the island, exploring every nook and cranny and speaking with the other campers. In total, there are 20 golden feathers and two silver ones; can you find them all?

Of course, Aunt May didn’t just bring you to this peaceful island to make a phone call — there’s plenty of recreational activity to do here! The most notable one, in my humble opinion, is the fishing game; with many different bodies of water to be found on the island come many different kinds of fish. Try filling up your fishing journal and see if you can collect them all!

Not feeling fishing? That’s fine! You can collect golden feathers, hats, play beachstickball, race against other campers, save up enough coins to help a camper pay their tuition, instill a little confidence in an artist, or just go nuts exploring the island, soaring above the clouds and taking in all the beautiful scenery. The hike may be touted as short, but it’s truthfully as long as you want it to be. Get to know every rock, tree, and creature in this beautiful place — it’s just as much a fully-fleshed out character as any of its inhabitants. 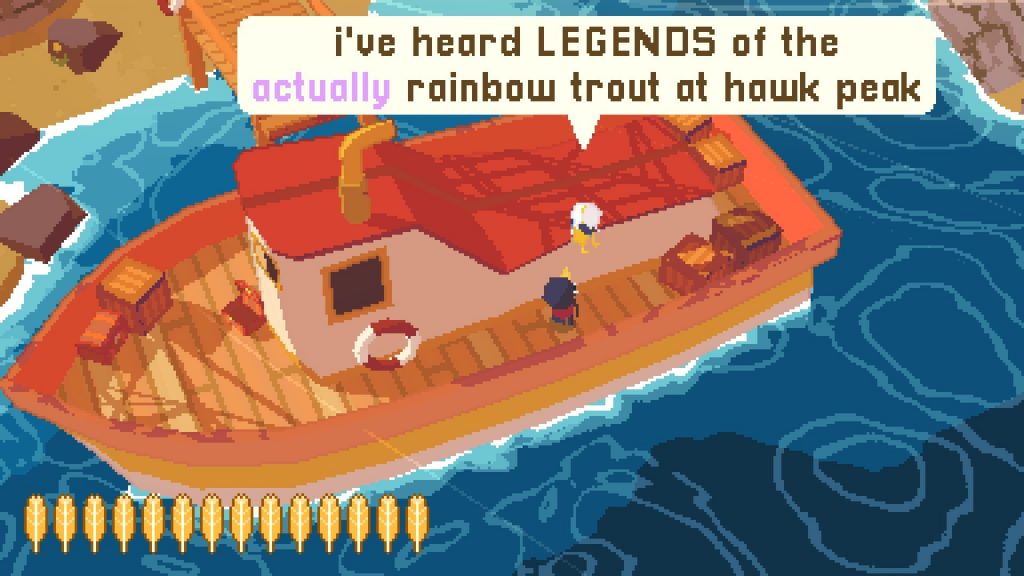 Speaking of the inhabitants — they’re chock full of character. I was instantly reminded of Night in the Woods in terms of writing, yet with a more positive spin. One camper laments that he’s lost his watch, and is terrified that it will be sold on the internet, which he definitely doesn’t trust. Another camper is afraid of being kicked off the island because a fish stole his license; return it to him (yes, a fish is involved) and he’ll delightedly scream about being legal again. One of my favorites is the young boy playing alone on the beach, building a sand city and running for mayor, only to come in third place. Oh well, at least he’s on the council, and will soon consolidate what little power he has to build a sand province (and after that, free candy for all). 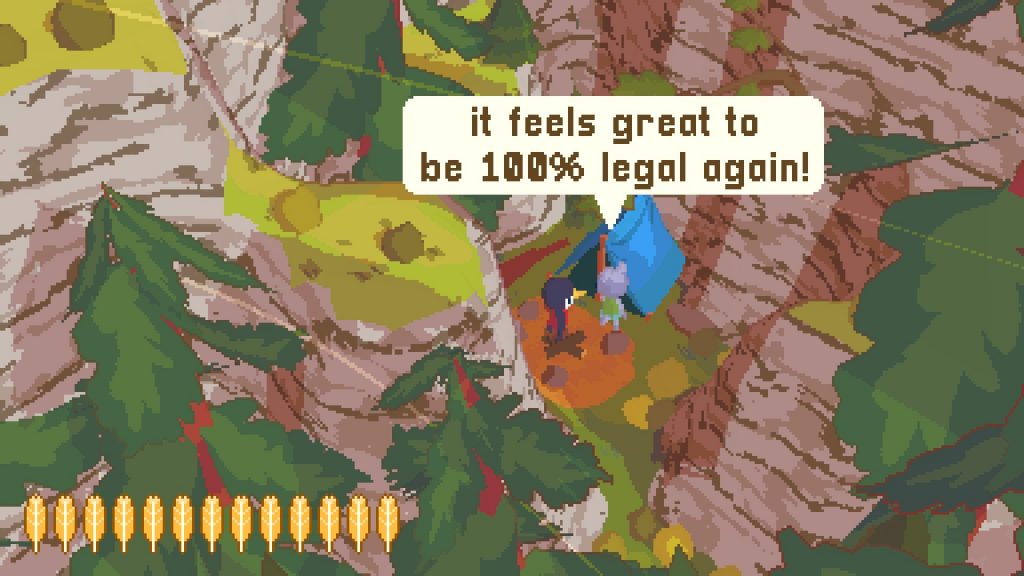 After climbing to the top and receiving that all-too-important phone call, I won’t lie — I teared up. I wasn’t expecting such a powerful message from such a little game, and one so lighthearted at that, but A Short Hike proved that it’s okay to stop and smell the flowers even if more pressing things are happening around us. In fact, it’s probably for the best to take a step back and just breathe every once in awhile. Maybe Aunt May was onto something bringing us to this spectacular island in the first place. 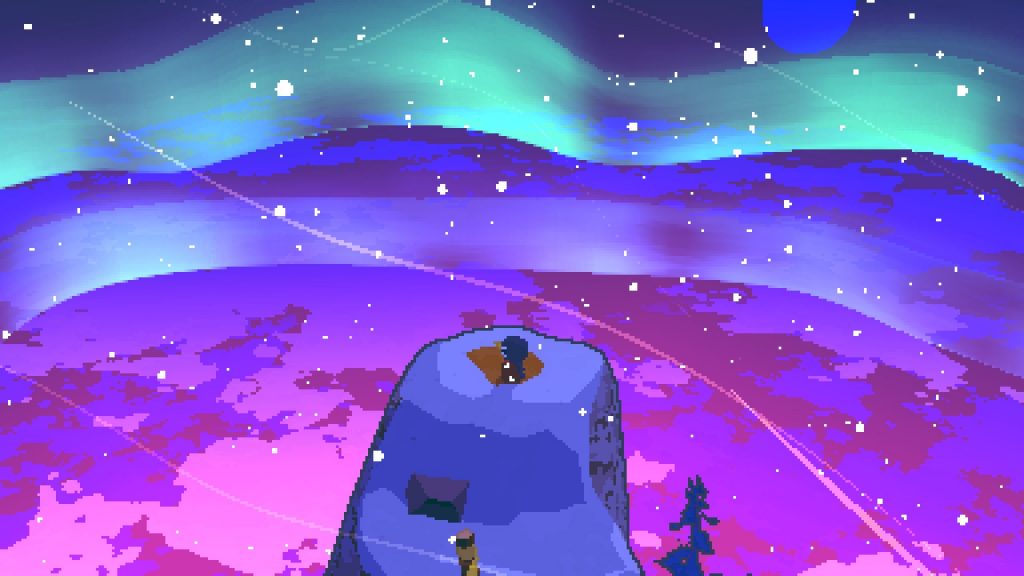 In fact, that was probably my favorite part of A Short Hike — I’ve been feeling extremely cooped up indoors with the quarantine and all, and it’s unlikely to die down any time soon for my neck of the woods. As such, visiting the island felt like that refreshing vacation I’d been longing for, despite its virtual existence. Although plenty of gamers have completed this tiny title in under an hour, I extended my stay on the island, prolonging my time with it as long as I could. So rarely do I never want a game to end, and even though I had run out of things to do, I couldn’t bring myself to turn off A Short Hike. I am not sure how else to say it, but I felt comforted, even loved, by A Short Hike, as if it was an active participant in making me feel better instead of simply being interactive media. I’m grateful for the experience.

A Short Hike stayed in my backlog for far too long, but the truth is, there wasn’t a better time than now to play it. With quarantine cancelling many summer vacations, those of us trapped in urban jungles have likely been longing for the beauty of the wild outdoors. Even in its low poly form, A Short Hike delivers on the experience, healing players in a way that only the feel of nature can. If you’ve been letting this sit in your backlog, now’s the time to dust it off. Whether you spend 45 minutes or five hours with A Short Hike, it’s time well spent and an absolute must-play.

Editor’s note: This review is based on a retail copy of A Short Hike purchased by the reviewer.

A Space for the Unbound Review: Love in playable form I’m a crybaby. I come from a long line of crybabies, like my mother and grandfather before me. I…