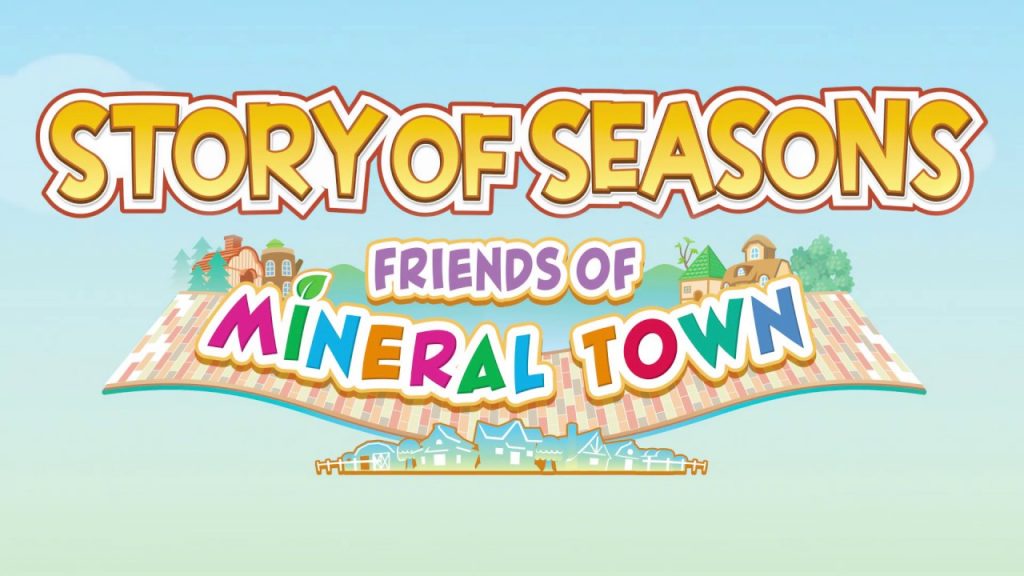 I feel like it wasn’t too long ago that I just wrote my preview for this game, and that’s probably because it actually wasn’t. However, you don’t necessarily need a lot of time for your opinion on a game to change. Fortunately, my opinion of Story of Seasons: Friends of Mineral Town hasn’t changed that much since initially previewing it. I still think that it’s an adorable and fun game, and a great nod to the Game Boy Advance title that many series fans remember so fondly (as far as I can tell, anyway). So, what has changed, you ask? Well, it’s the realization that this game was, like I just said, originally for the GBA.

I didn’t go into Friends of Mineral Town expecting it to be on par with more recent Story of Seasons entries. I knew that it was older, and that, despite the game being polished up, its “GBA skeleton” was still going to very much be in there. And, eventually, said skeleton was let out of the closet. Story of Seasons is a series that, in my opinion, typically continues to get better as time goes on. Sure, I’m aware of what made this game so popular among fans originally, and I respect that. However, as someone who missed out on playing the original Friends of Mineral Town, a lack of nostalgia left me with a game that was most definitely fun but left me wanting to play SoS games that, in my opinion, were better. 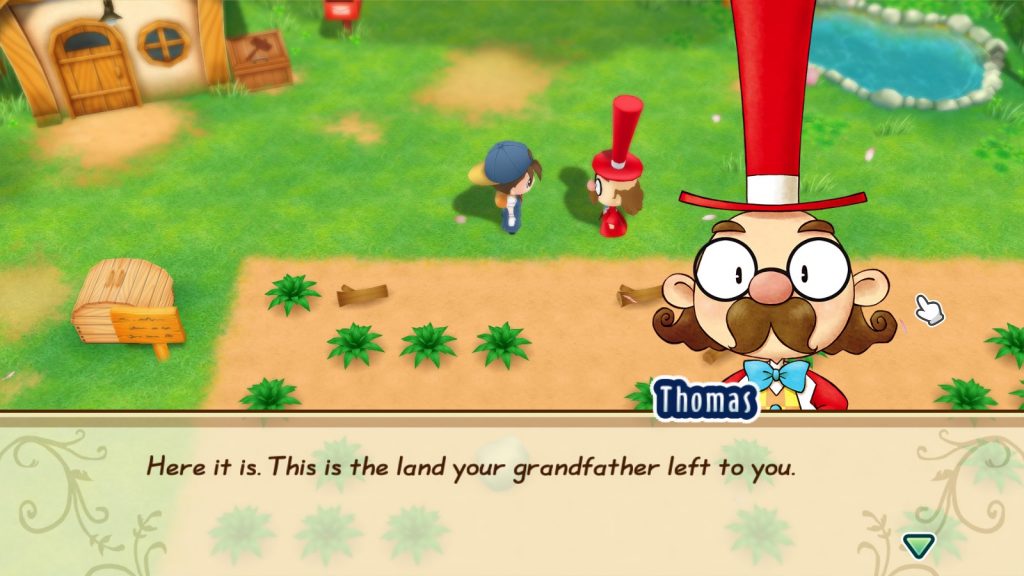 Story of Seasons: Friends of Mineral Town‘s story is extremely straightforward and, as far as I can tell, doesn’t deviate from the original story (aside from the fact that you can pick from one of four different characters in the beginning). The game begins, like many  SoS games, with your character of choice inheriting a patch of farmland left to them by their grandfather. Having fond memories of being on your grandpa’s farm as a wee tot, and being naturally drawn toward farming, you eagerly accept responsibility for the land and begin tending to your own little farm-fresh slice of Heaven.

Outside of the beginning of the game and a few key events, Friends of Mineral Town doesn’t really have a “story.” Most Story of Seasons games don’t. But what they do have are townsfolk—in this case, the townsfolk of Mineral Town. Replacing any semblance of a traditional story (which, once again, isn’t typically a thing in these games) are many “slice-of-life” events surrounding yourself and various folks. In many cases, these events involve romance options—either between you and a potential marriage candidate or between pre-determined romantic rivals—but other events surrounding other characters can occasionally crop up (no pun intended) as well. And, while these non-romantic events aren’t something that you’ll experience often, a surprising number of them have more depth than I was expecting—making the payoff of waiting for them worth it.

The Charm of the Farm 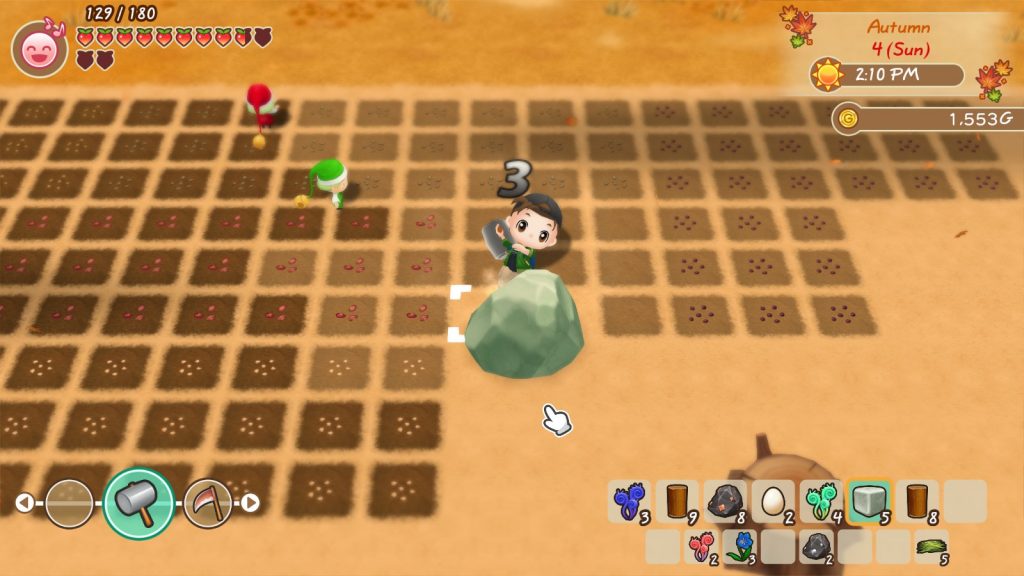 Farming can be tiring work; don’t go at it alone!

It shouldn’t come as a surprise to you that the focus of this game is on farming. Nor should it be surprising that it’s taken a few hefty steps back in terms of mechanics. Compared to its myriad of successors, the number of ways in which the player can interact with their farm is relatively limited. The slower pace of planting and growing crops can take some getting used to—although the player can enlist the help of Mineral Town’s local Nature Sprites to ease their burden—but, other than that, there’s not much to comment on regarding farming itself. It’s slow, simple, and works just fine. Clearing out your farmland, however, is a different story.

While breaking rocks and chopping stumps has always been a staple of the series, Friends of Mineral Town, I couldn’t help but notice just how much debris this game places on the player’s singular plot of farmland. But not just any old debris; a lot of it is high-level stuff. Because of this, the player isn’t able to completely clear their land right away—and probably won’t be able to do so for quite some time—meaning that you’re going to either have to dedicate a lot of time leveling up your tools right away, or work around the eyesores until you get there naturally. Now, I suppose that I shouldn’t complain too much. Stuff like this has been around in the series for quite some time. Still, having to segment your farm in weird patterns because a bunch of dead trees blew into your yard is a little annoying. 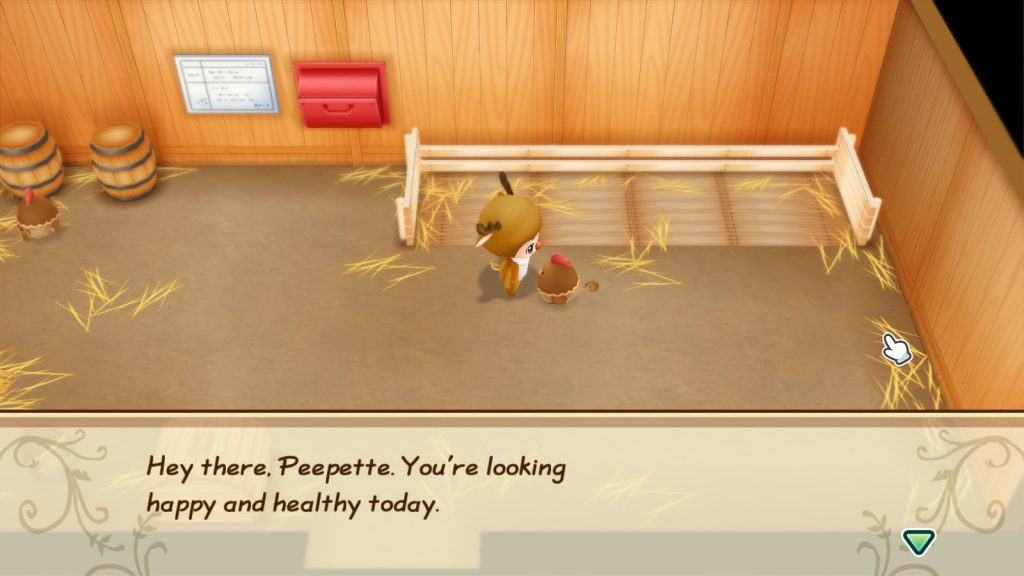 The best part about raising animals is that they don’t judge your taste in fashion.

As with growing crops, raising livestock is also a slow-yet-rewarding process. And, thanks to the inclusion of a few new animals, it’s more diverse than ever! Raising your farmland critters in Friends of Mineral Town doesn’t differ too much than it does in any other Story of Seasons game. So long as you take care of your animals, they’ll grow to like you; and the more they like you, the higher the quality of their products. It’s pretty hard to go wrong with something this cute and fun.

The only real gripe that I have about livestock in this game is how affection is handled. Unlike in other games, store-bought livestock has a very low maximum affection threshold. I wouldn’t have an issue with this if all I needed to do to obtain the highest max affection were simply breed the animals I bought and be done with it, but that’s not the case. Instead, you’ve got to have multiple generations of animals. I understand wanting to pad out the game, but how come my chickens will only truly love me if they’re, like, the great-great-granddaughters of the one that I originally bought? It doesn’t make a lot of sense.

Wintertime (And the Other Three Seasons) Wanderin’ 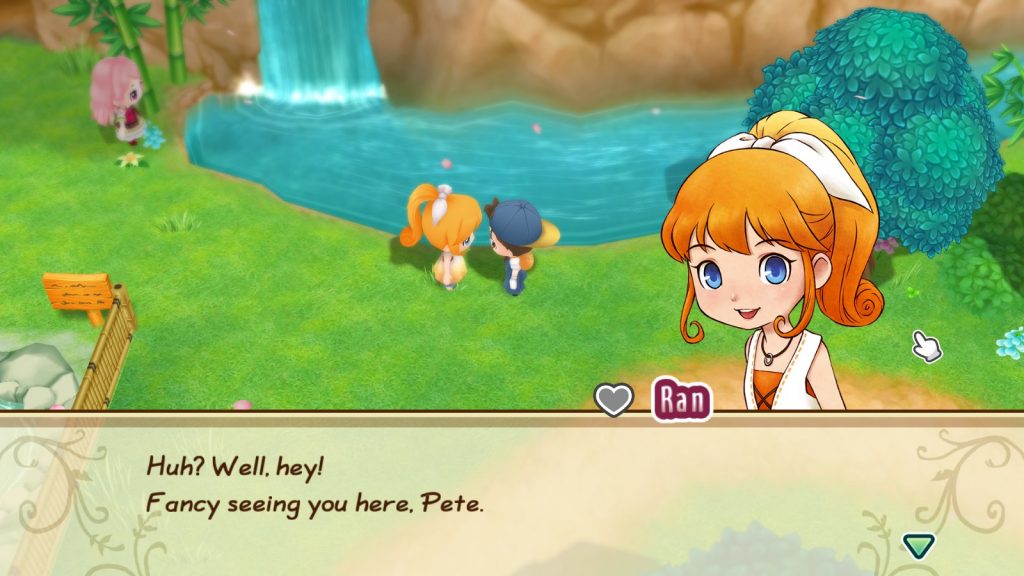 I mean, I come here almost every day, but, uh, sure.

Farming is fun and all, but it’s not everything that Friends of Mineral Town has to offer. There are places that you can explore, too! Naturally, Mineral Town itself is one of the biggest explorable attractions because it’s the center for both shops and people. Unfortunately, it’s kind of… well, plain. Once again, this could be the lack of nostalgia talking, but Mineral Town itself feels somewhat generic. It’s mostly a giant square that offers little more than repetitive conversations with townsfolk and stores, which meant that I went there far less often than I expected myself to.

Fortunately, the surrounding wilderness fares much better. While not huge by any means, the areas to the south and west of your farm (as well as the “hidden spot” within Mineral Town itself) are abundant with nature, meaning that there are always items to forage for, fish to catch, and stumps and rocks to break down for materials. Of course, you aren’t the only person enjoying nature; it’s common to bump into other people while wandering around the great outdoors. Unlike within Mineral Town itself, talking to people while outside seems a lot more organic (once again, no pun intended), and was ultimately a lot easier to integrate into my daily routine than running around town in search of specific people to talk to/shower with gifts. 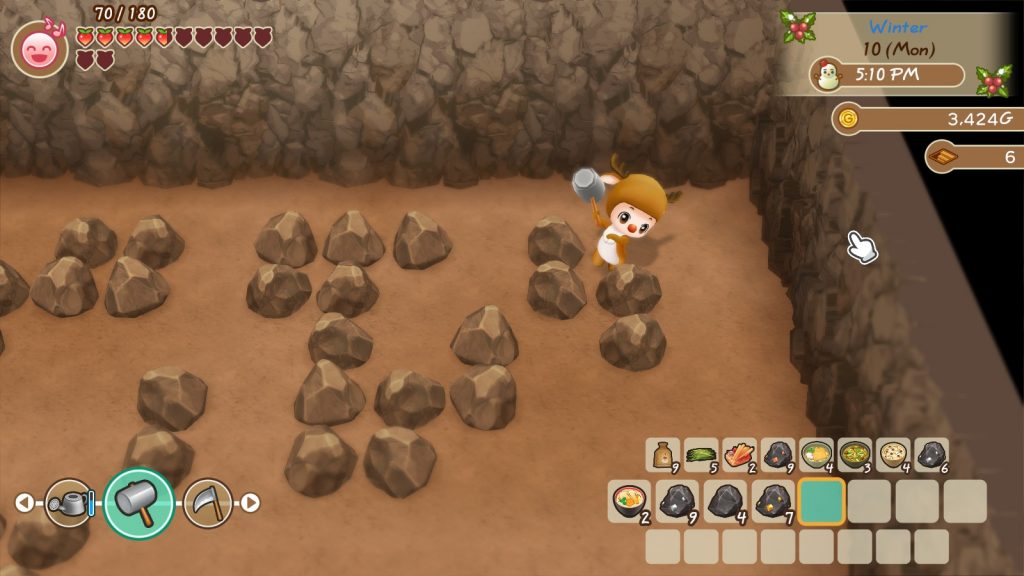 There’s gold in this here mine! And silver, and copper, and…

Staying true to its name, Friends of Mineral Town also has its very own mine! Two of them, in fact! And, surprisingly, they’re actually related to farming. At least one of them, anyway. While not technically necessary, mining is the only way to obtain the required items needed to upgrade your oh-so-important farming tools. So, unless you’re fine doing everything one square at a time forever, you’re going to need to mine.

Mining itself isn’t complicated. You literally just hit rocks with your hammer and dig into the ground with your hoe. But the mine doesn’t consist of a single floor. Or even 10 or 50 floors. Both mines in this game go down a whopping 255 floors. Fortunately, you don’t have to go down very far to get most of the necessary upgrade materials. But if you’re intent on getting everything out of this game that you can, then you’d best learn how to conserve and recover stamina as efficiently as possible.

Story of Seasons: Friends of Mineral Town is a nod to the classics. It doesn’t come packed with many of the highly useful mechanics and features that many of the newer SoS games do. But does that mean that it isn’t fun? Absolutely not. While Story of Seasons: Friends of Mineral town probably isn’t something that I’d recommend to every series fan out there, its undeniable charm and simple-yet addictive gameplay should still be enough to attract its fair share of players.

Rally of power, too sweet to be sour!   We should probably get this out the way first: Power Drive Rally for the Jaguar is not, as many people…