It is better to have loved and lost… 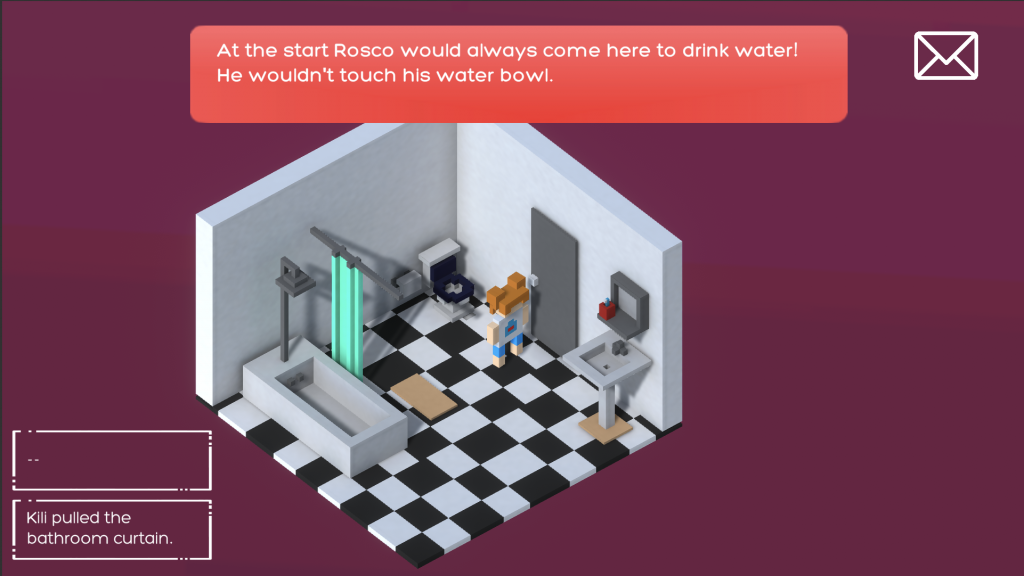 When I was a little girl, my cat Micheal helped me and my family get through some hard times.

He was there for the four of us — my mom, my two sisters, and me — throughout my parents’ divorce, caring for us in his own way. At night, he’d “put us to bed” by coming into each bedroom, purring away, until we were sleepy. Once he felt his job was done, he moved onto the next person, revving up that purr box to send someone else off to dreamland.

On the weekends my sisters and I left for my dad’s house, my mom and Micheal were left with only each other. She’d practice piano in the spare time she had, and he’d sit up with her on the piano bench and meow alongside her. “I know,” she’d say to him, “I miss them, too.”

His gentle nature kept me grounded for 20 years; it’s been 6 years since cancer took my best friend from me, and as the years go on, I feel more and more like I’m the only person who still thinks about him. I’m not sure I’ll ever stop mourning this beloved soul, but I do feel alone in my emotions as time passes.

Perhaps this is what drew me to Kili’s Treasure. Developed and published by solo indie dev Siddharth Sivaraman, Kili’s Treasure is a voxel-style puzzle game that allows the titular character to explore her feelings surrounding her dog Rosco’s death as she searches for the clues her mother left for her. Can you help see Kili through to the end of the treasure hunt and obtain the prize waiting for her? Only one way to find out! 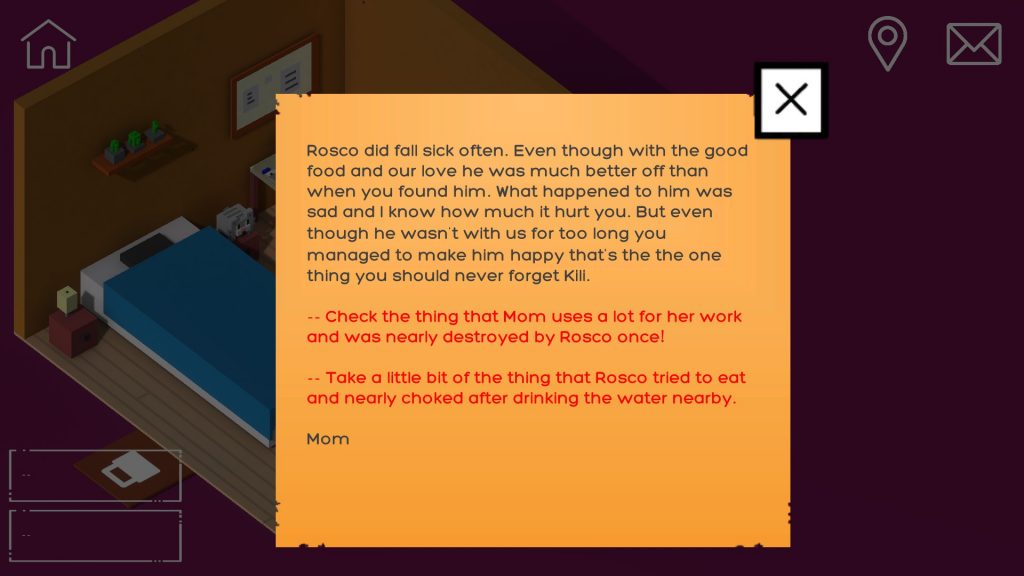 Controls in Kili’s Treasure are extremely simple, as they’re all mouse and menu based. Click an object and a menu pops up wherein Kili can choose to inspect it or interact with it in some way, either by looking under the object or searching it. As the game progresses, Kili’s search area gets bigger, starting with just her bedroom and opening up to other rooms one by one, such as the bathroom, living room, and kitchen. By exploring the entire area, you get a feel for what Kili’s life is like in this cozy voxel home.

Kili’s mom has something up her sleeve that she wants Kili to discover by way of clues. Her clues take the form of a piece of paper with some sort of story exposition, like talking about the time they first found Rosco or how much Rosco detested bathtime. She then asks Kili to perform two tasks in order — only performing one or doing something else in between the two tasks will fail to activate the next clue. It is therefore imperative to read each clue carefully before interacting with everything in the room. 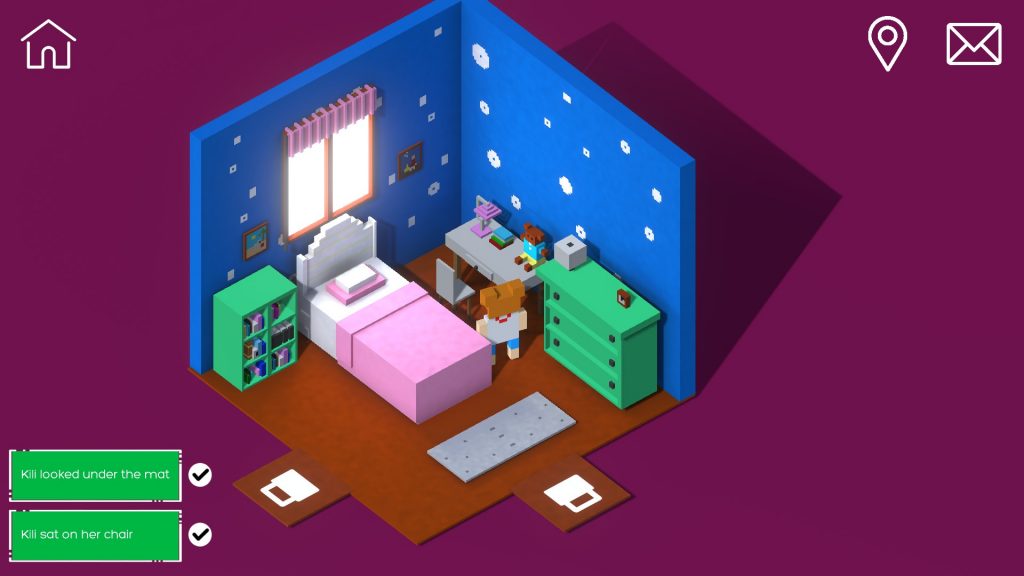 Speaking of the items to interact with, there’s 46 of them, meaning there’s a lot of exploration to do in this tiny house. Each item comes with even more story, which links back to the clues. For example, by clicking on the picture in the bedroom, we learn that Rosco was initially scared of the beach but grew to love it, or that Rosco only liked eating off blue bowls so long as Kili was doing the same. The memories jogged by the items are tidbits of information necessary to complete the tasks laid out in the clues, and after reading each text dialog that accompanies the items, you’ll soon find you’ve committed Kili’s memories to your own.

I won’t lie, I found the mechanic in Kili’s Treasure a bit confusing and a little tedious. It’s a clever little exploration puzzle on paper, but in practice it became a little frustrating. Some of the text in the clues can be confusing, so it was easy to end up clicking what you thought was the right option, trudging clear across the other side of the house to accomplish the next task, only to find out the clue was clumsily referring to something nearby. It only happened on a few occasions, but it was a few too many. 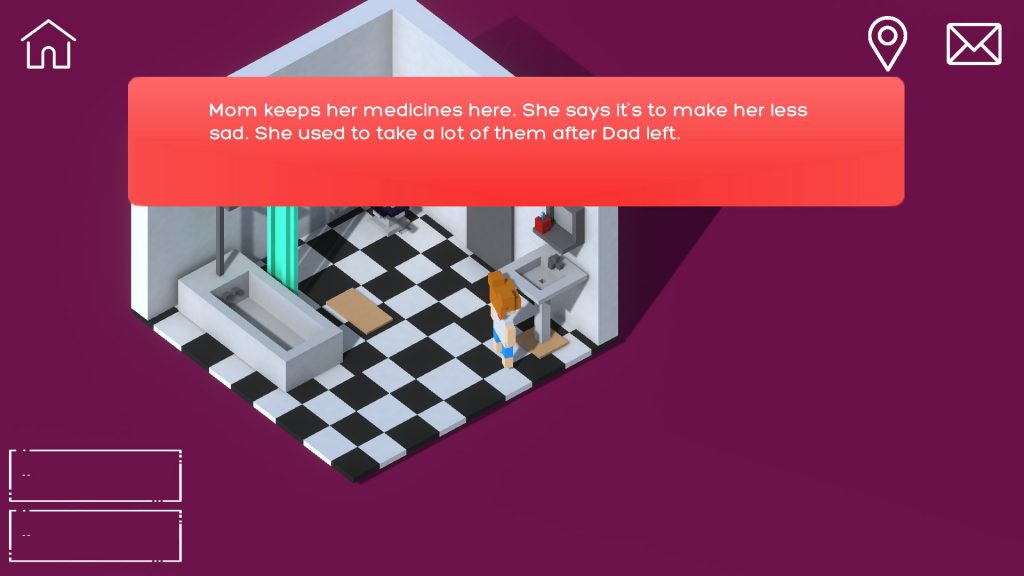 Where the mechanic in Kili’s Treasure somewhat flailed, the storyline was blunt and bittersweet. It became clear very quickly how important Rosco was to Kili and her mom — after Kili’s dad left, Kili and her mom struggled to adjust to their new life together. Kili’s mom took anti-depressants and stopped doing activities that once brought joy, such as playing video games or leaving jokes on the fridge. That all changed one day, when Kili brought Rosco home and their lives were enriched by his presence. Although Rosco was in pretty bad shape and required a lot of medications to survive, the trio spent two happy years together before he left “for the farm.” As much as Kili saved Rosco that day, Rosco saved them, and they both miss his presence terribly.

It’s this personal touch that is hard to explain at my age — where most of my peers lost their first pets long before they had kids, my childhood companion was still a part of my life well into adulthood. From age 5 to age 25, Micheal did not leave my side — two decades were spent with this cat, who was sometimes all I had in the world. After he first passed, friends and family would speak fondly about him and all their cherished memories of his lovable personality. Over time, I was left alone with my thoughts of him. It was soothing, then, to walk down memory lane with Kili and her mom, listening to them work through their feelings about Rosco and how he had helped heal their fractured little family. Rosco wasn’t my dog, but in the end, he and Micheal had a lot in common, and to hear conversation about him kept both of them alive in a small way. For that experience alone, I am grateful.

Kili’s Treasure is short and sweet — literally, I completed it in an hour — and its mechanic leaves something to be desired, but it ultimately leaves me with happy tears and a powerful message about leaving room in your heart after the passing of a beloved pet. Rosco came into Kili’s life just as everything seemed to be spiraling downwards, and his passing taught them valuable lessons about communication, kindness, and coping. If you’re looking for a quick little puzzle that doesn’t break the bank with a cute art style and a surprising amount of depth, it might be worth it to discover Kili’s Treasure.

Full disclosure: This review is based on a Steam review copy of Kili’s Treasure purchased by the reviewer 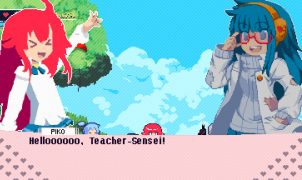