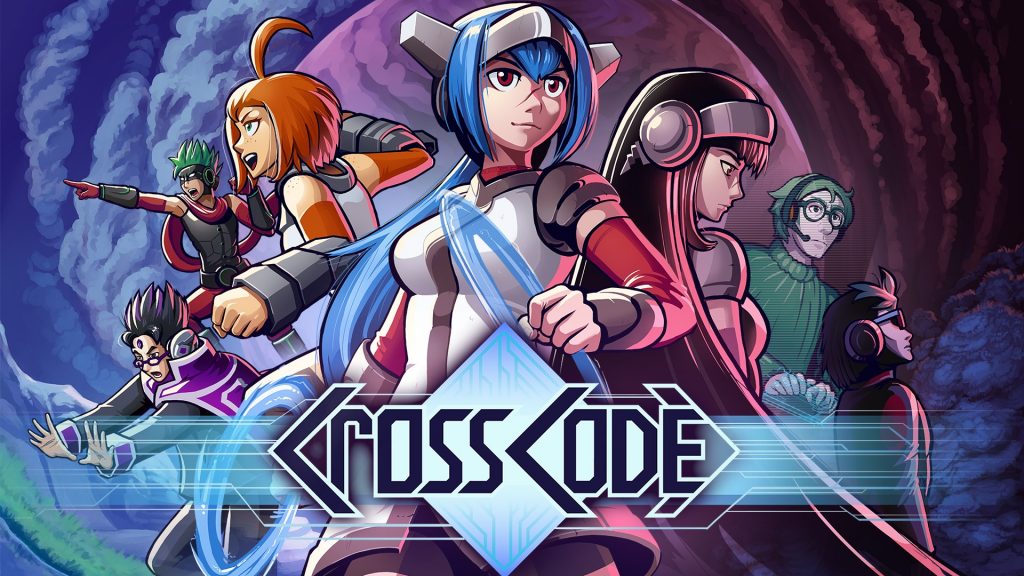 I’m sure that most of us are familiar with the concept of gatekeeping as it applies to the world of video games. We’ve all had expenses where someone’s told you that you’re not worthy of truly enjoying a game because you don’t know enough about it, or, in many cases, because you aren’t good enough to beat it (or were maybe the ones doing said gatekeeping). Sounds familiar, right? Well, what if I took that a step further by asking if you’ve ever experienced gatekeeping not from a community surrounding a game, but the game itself? No, no, I don’t mean that it sits there and insults you (although some games do that)—I’m talking about games that expect you to get good at them very, very quickly, or risk never being able to get very far. And, wouldn’t you know it, that describes CrossCode perfectly.

Now, maybe “gatekeeping” isn’t the best word to use, as its connotation is entirely negative. But I’d be remiss if I said that I didn’t feel like CrossCode was consistently testing my worth. Be it through battles, exploration, or puzzle-solving, nothing in this game is very easy. At times, said difficulty frustrated me. Like, a lot. But I, uh, kind of loved it. I loved it because it forced me to get better at it. Each time I solved a difficult puzzle or finally made it to some far-off treasure chest I felt really good about myself, which pushed me to keep on pursuing this game to its fullest—and, at the end of the day, I think that’s what makes this game so brilliant. 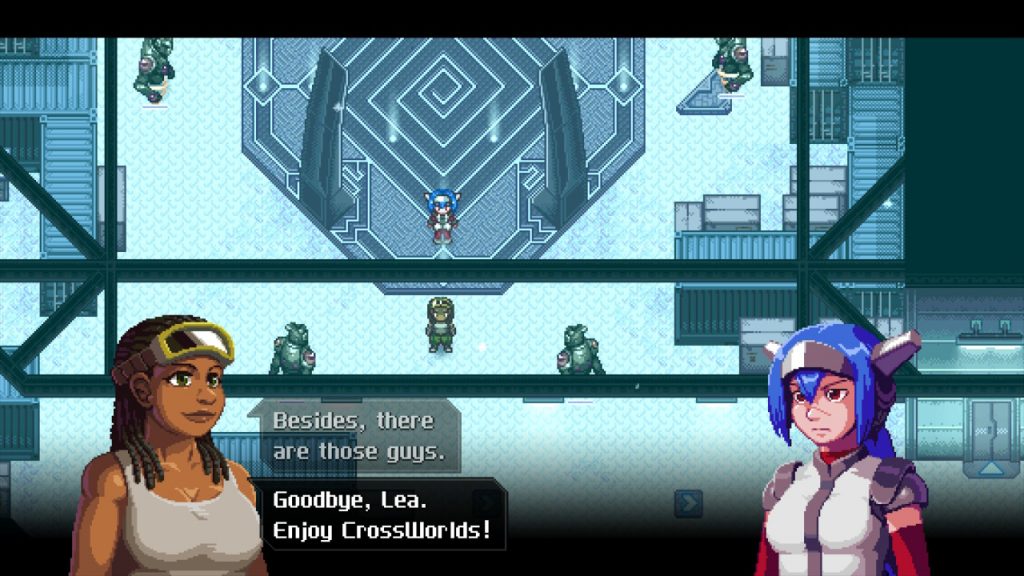 I’m going to assume that none of this follows standard tutorial protocol.

CrossCode‘s story follows one of my all-time favorite tropes—the “game-within-a-game.” CrossCode‘s story, which is set in the distant future, follows Lea, a player who has not only found herself unable to recall anything about herself but has also become trapped within CrossWorlds—a fictional MMORPG that allows players to not just play as, but become their characters through a neural linking device. However, while some people would love to be trapped for all eternity within an MMO, this game isn’t all fun and games for Lea. Fortunately, it appears as though Lea’s played through CrossWorlds before—thus, with nowhere else to go, and some out-of-game help from a mysterious ally, Lea begins her journey through this wondrous MMO in search of loot, levels, and the answers regarding her own identity.

To put things bluntly, CrossCode is an excellent example of why the “game-within-a-game” trope can be so neat if it’s pulled off correctly. Despite the circumstances surrounding Lea (which go from serious to even-more-serious as the game progresses), she’s still bound by the limitations of CrossWorlds. She can’t hack herself up to level 99, enable God Mode, freely teleport around, or anything like that; she’s just a seemingly normal player. A seemingly normal player who has to follow the rules by completing CrossWorld‘s in-game story and familiarizing herself with in-game lore. This, in turn, creates a  meta-narrative that makes full use of CrossCode‘s double-layered story. And, while said meta-narratives can be really hard to pull off, CrossCode does it with finesse to spare. 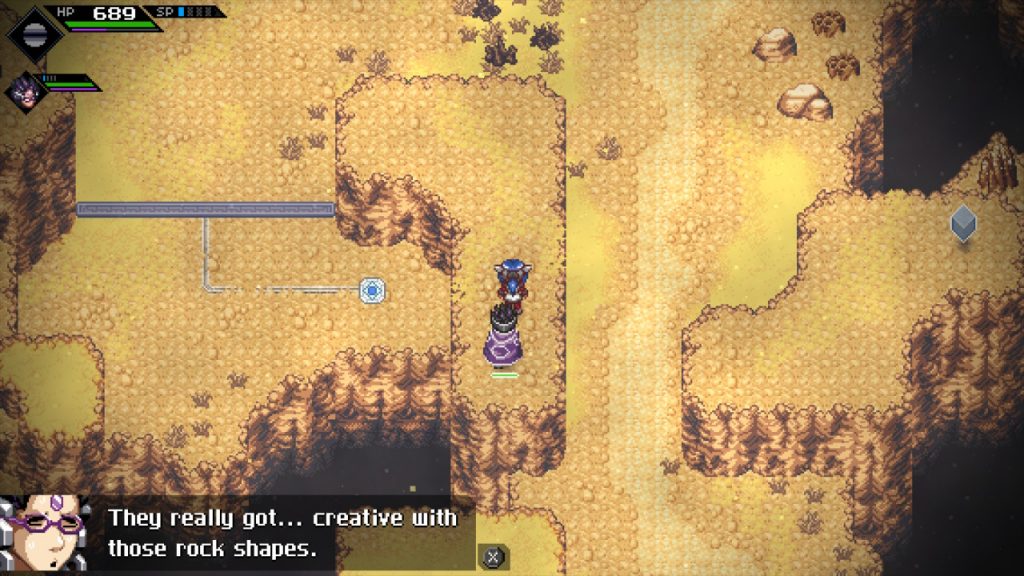 That’s because they want us to jump around on them, my friend!

If you’ve played games like .hack or Sword Art Online, you might be familiar with the whole “game-within-a-game” thing that I’ve been blabbering on about. Most of the time, these games—especially ones based on MMOs—try pretty hard to emulate an authentic feel. But CrossCode? Well, it’s a tricky little bugger. While it operates under the guise of an RPG, it’s actually a puzzle-platformer RPG! Dun-dunn! In all seriousness, though, CrossCode doesn’t operate how games like this normally do. While there is still a heavy emphasis on things like quests, fighting, and looting (as there should be), this game is extremely heavy on other, less common mechanics as well.

As a top-down RPG with no dedicated jump button, platforming in CrossCode can most easily be likened to that found within 3D Legend of Zelda titles. However, unlike LoZ, which doesn’t have you hopping around all too often, anything that isn’t a main road in CrossCode is a hop, skip, and a jump away. Literally, that is, not metaphorically. Yet another thing that CrossCode does is put things—especially treasure chests—in easy-to-view locations which, in reality, are quite the contrary to get to. This ultimately creates a system which, for lack of a better term, goads the player into finding them. Or at least try, anyway. 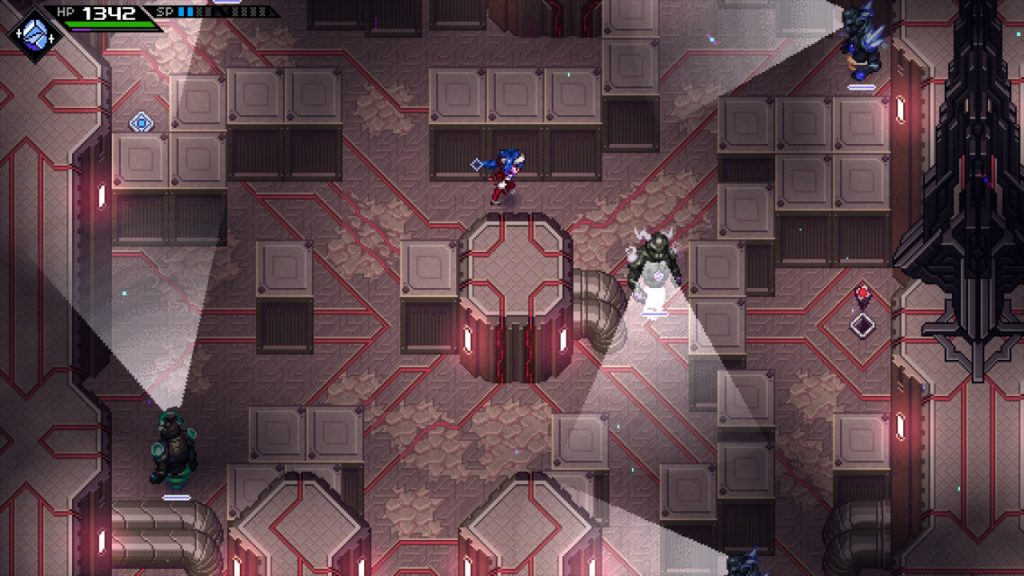 The way that CrossCode is set up might sound frustrating. There’s no need to worry, though, because it totally is. But that’s part of its charm. A lot of parts in this game—especially those related to puzzles and platforming—require solutions that are either creative or precise. And, later on, both. It’s hard at first. I won’t pretend that there were times when I found myself stuck on something, managed to brute-force my way through by literally trying everything that I could think of and saying to myself, “how was I supposed to know that this was the answer!?” That happened more than once (and I say this as someone who played the game back in 2018 when it came out on PC). However, the more I continued to play, the more precise and creative I found myself becoming—which led to things gradually becoming less difficult overall. Sure, there were still parts that stumped me, but the game forced me to adapt to it. To get better. And, by getting better, the game became more fun. 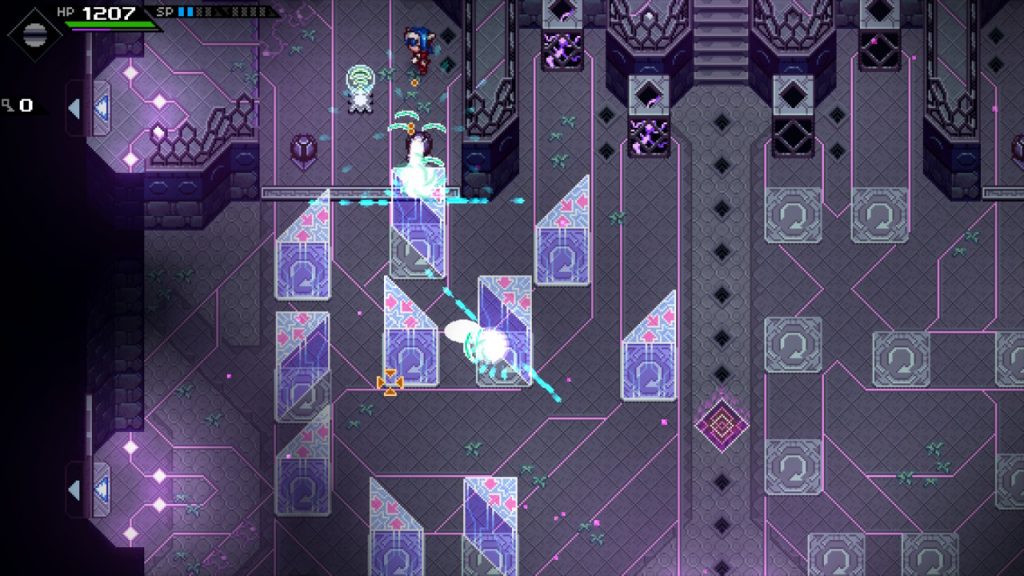 This isn’t as bad as it looks. I promise.

CrossCode‘s platforming may get tricky sometimes, but it’s got nothing on the game’s approach to puzzles. And, even worse (or better, perhaps) is the fact that a lot of the puzzles falsely give off the illusion of being simple and straightforward. And that’s because most of the puzzles are solved by throwing things. Called “VRPs,” or, more casually, “balls,” within CrossWorlds, the ability to charge and throw projectiles with the ability to ricochet off of things not only comes in handy during combat but is, in tandem with basic platforming skills,  also essential to solving the game’s puzzles. What does this mean for the player, you ask? Not much, really, except for mastery over the game’s physics and the ability to see solutions in every object, no matter how trivial they might seem. You know, the easy stuff.

Now, it might seem like I’m being hyperbolic in describing just how aware of their surroundings CrossCode wants the player to be when solving its cornucopia of puzzles, but I’m not. And, while I’m mostly happy with the fact that it’s so dependent upon the player’s skill, there are a few times when the game gets ridiculous. Because of the exact timing that the game oh-so-often demands of the player, some puzzles can go beyond challenging and into the realm of being unfairly tricky. Sure, I don’t mind having to try a really challenging puzzle a handful of times, but the fact that some of them expect a level of player perfection that borders on being robotic in nature, as well as the few puzzles that expected you to utilize mechanics that hadn’t been explained, left me feeling somewhat sour at times.

I Can’t Think of a Clever Pun for This Section, but it’s About the Game’s Combat Mechanics 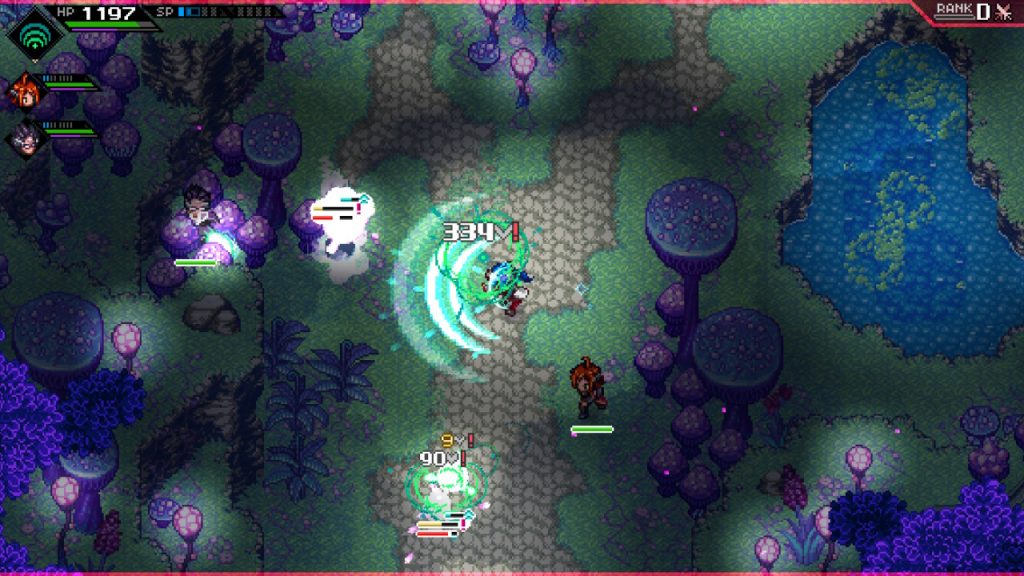 Elemental affinities are essential to pay attention to!

If this were any other pseudo-MMO, there’s a good chance that I’d start off this section by talking about how combat is driving force behind the gameplay. But we all know that that isn’t the case with CrossCode. That doesn’t mean that it’s not important, though! Like every other RPG out there, combat plays a crucial role in CrossCode. And, like everything else in CrossCode, it’s got a relatively high learning curve. In terms of actual mechanics, nothing about fights in this game is difficult. In fact, it’s probably the easiest thing to get a handle on overall. But CrossCode knows that; and that’s why it once again ensures that you’re always on your A-Game.

Fights aren’t so much about whether or not you know the mechanics, but how well you utilize them. From remembering to scan opponents for elemental weaknesses to executing perfect doges and blocks, fighting is a game of survival more so in this game than in many others. However, once you’ve got things down comfortably, it’s also one of the most enjoyable things about this game, in my opinion. Sure, solving puzzles feels great, but there’s nothing quite like being able to skillfully utilize your abilities to take down opponents with ease… or at least with less difficulty.

CrossCode is probably the most fun that I’ve ever had with being frustrated with a game. This game knows it’s good and wants to make absolutely sure that players know just how much time and painstaking effort went into creating it so that they know how good it is, too. Is it a bit gatekeep-y at times? Eh, sure, I guess. But it’s a gate that’s an absolute joy to climb over. And, if you still aren’t convinced, maybe you should just try logging into CrossWorlds yourself.

CrossCode releases digitally on the Nintendo Switch eShop and PlayStation Store on July 9, 2020, with a retail version to follow on August 28. You can pre-order the boxed version of the game now through publisher ININ Games.

Bound in the wind and I’m in the Windbound Like many of you, I was lulled into a false sense of security about Windbound thinking it would be “like…