Love is NOT over 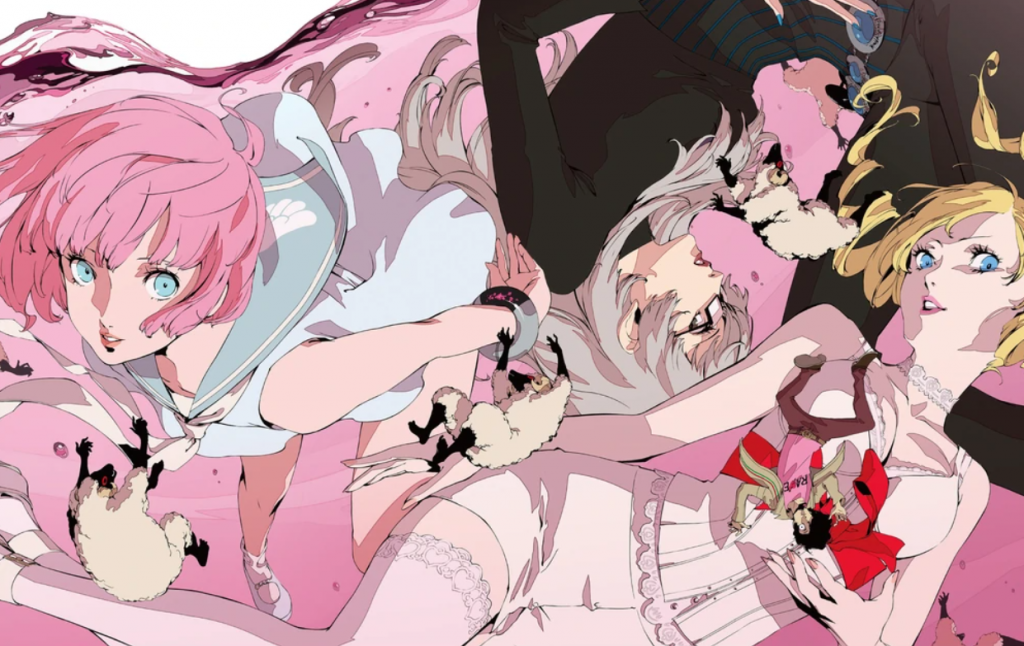 Catherine is still, to this day, my favorite PS3 game.

Few games reach the level of greatness the original Catherine achieved. It had everything — solid storytelling, fantastic music, superb voice acting, two great art styles, a legitimately fun core mechanic, a plethora of extra content, and a surprisingly entertaining multiplayer mode that ended up becoming something of an esports go-to. And the Mesopotamian/Sumerian mythology incorporated into the experience? I could fill an entire thesis on the layers Catherine possesses, from the characters down to the rings pulled at the end of each puzzle (seriously, it’s mindbogglingly deep). Catherine is by far one of the most outstanding gaming masterpieces of our time, and I always feel a little shell-shocked after each playthrough as my understanding of the title grows. 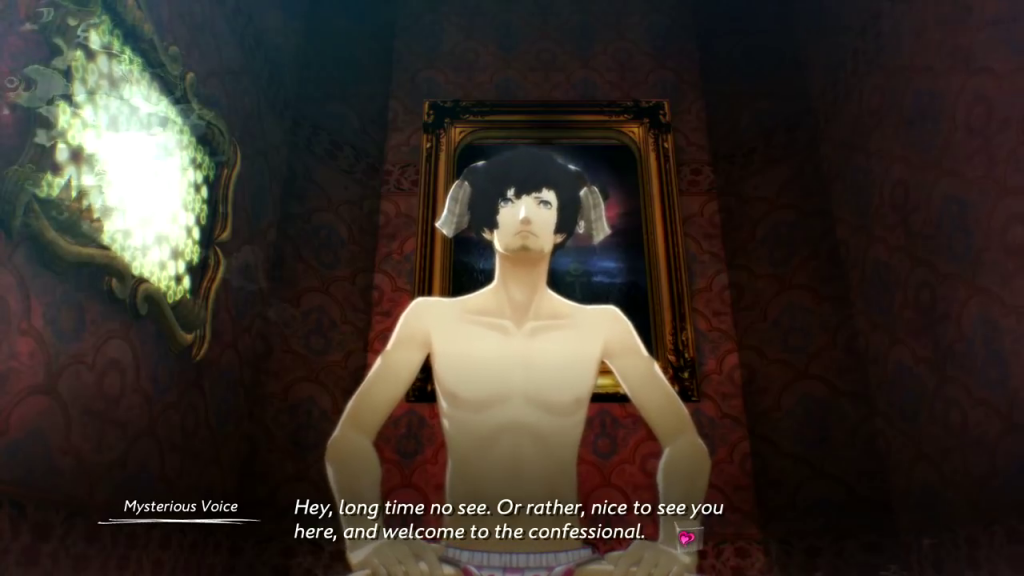 So, I obviously had to jump at the chance to review Catherine: Full Body for the Nintendo Switch — having worked so hard to avoid all possible spoilers from previous platform releases, I felt finally ready to tackle the remake. How did it compare to the original… or, rather, how could it? Only one way to find out.

To quickly summarize, Catherine: Full Body follows the story of 32-year-old developer Vincent Brooks, a poor-postured underachiever content with everything staying as is. Unfortunately for him, his career-focused, ambitious long-time girlfriend, Katherine McBride, is pushing for marriage — and for good reason, as she’s pregnant. As Vincent commiserates relationship responsibilities with his friends at their favorite bar, another girl, Catherine, seduces Vincent. As their affair progresses under Katherine’s nose, yet another potential love interest, Rin, enters the scene, selflessly attempting to help Vincent through the nightmares he’s been having.

What nightmares, you ask? Why, the ones he has every night that, if he doesn’t push blocks around to get to the top of the other-worldly tower in time, he dies in real life. Can’t a guy catch his breath? Let’s just say it hasn’t been Vincent’s week. 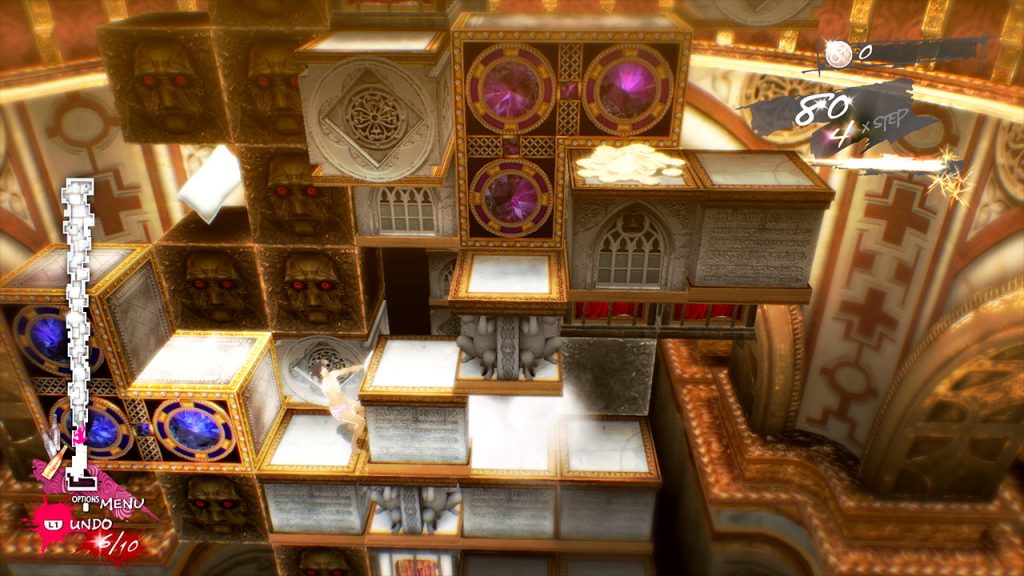 As far as gameplay goes, Catherine: Full Body continues to amaze. The developers deserve all the praise for quality of life updates to the puzzles, such as an enormously helpful illuminated blue line showing players which level of blocks they can hang off and the inclusion of the Safety difficulty setting, which allows players to skip all action puzzles in their entirety. If this sounds like cheating… kinda? But considering that Catherine: Full Body has a whopping 14 possible endings, at some point those players hoping to see them all may feel inclined to fast forward through some of the more time-consuming portions of the game.

Additionally, there’s also a new Remix mode, which switches up the puzzles to incorporate a new block type. Several blocks will be grouped together by color, and when Vincent pulls one, he pulls them all. It’s an optional challenge, but one that is certainly welcomed by those who have been playing for years and wanted to freshen things up a bit. 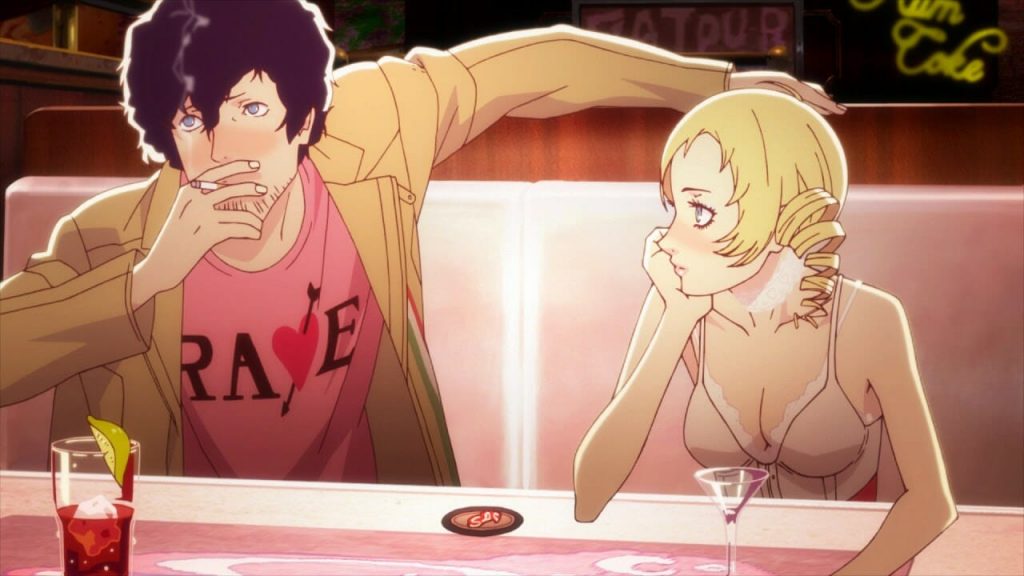 It doesn’t stop there — with 5 new endings (a new Catherine ending, a new Katherine ending, two Rin endings, and a Persona ending), new songs added to the soundtrack, new animation — both hand-drawn and CGI — that incorporates new lines from the original voice actors reprising their roles (the Japanese version adding 9 voice overs to Catherine for the player’s “ideal” voice), and even new stray sheep, nothing about Catherine: Full Body is half-assed; true to form, Atlus meticulously crafted more to the original storyline, considering it to be the “definitive version” of Catherine.

Which brings me to the pink-haired elephant in the room: Rin. 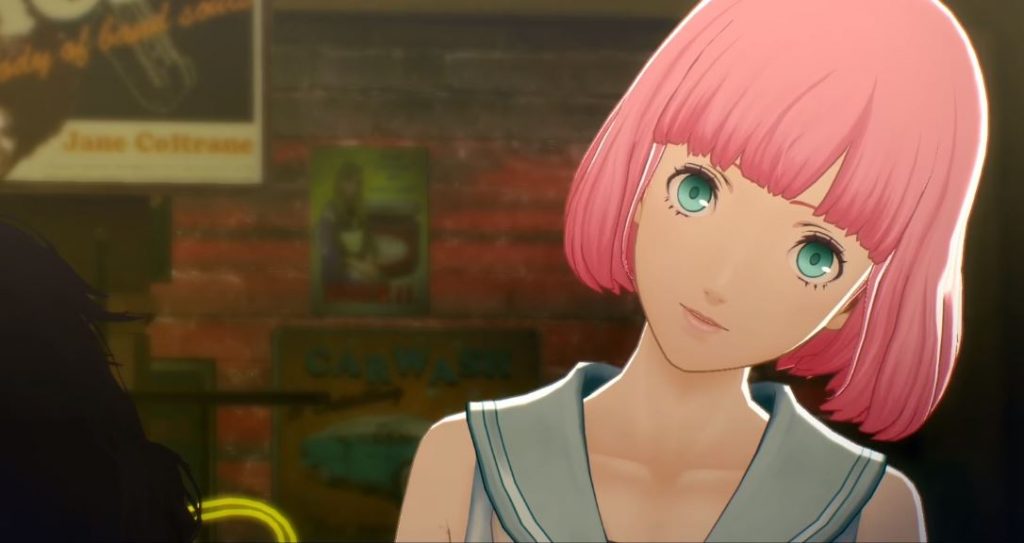 The original Catherine’s balance was perfection — Katherine represented love, Catherine lust. Katherine adult responsibilities, Catherine hedonistic pursuits. Katherine was reality, Catherine was fantasy. Vincent was a fairly passive schmuck who let life happen to him, so Katherine’s desire to move their relationship forward provided the much-needed character development to make him a better man. Catherine, on the other hand, embodied all his negative qualities presented in a pretty package; where he saw uninhibited freedom, he should have recognized selfishness. We all have our inner battles — Vincent’s was simply that he needed to take charge of his own destiny and become an active participant in his own life; through Catherine, either by rejecting one or both women, he succeeds.

The introduction of Rin is the intrusion upon an already thoroughly balanced spectrum. Where one Catherine was hot, the other Katherine was cold. In what direction should Vincent — and the developers — go from here? 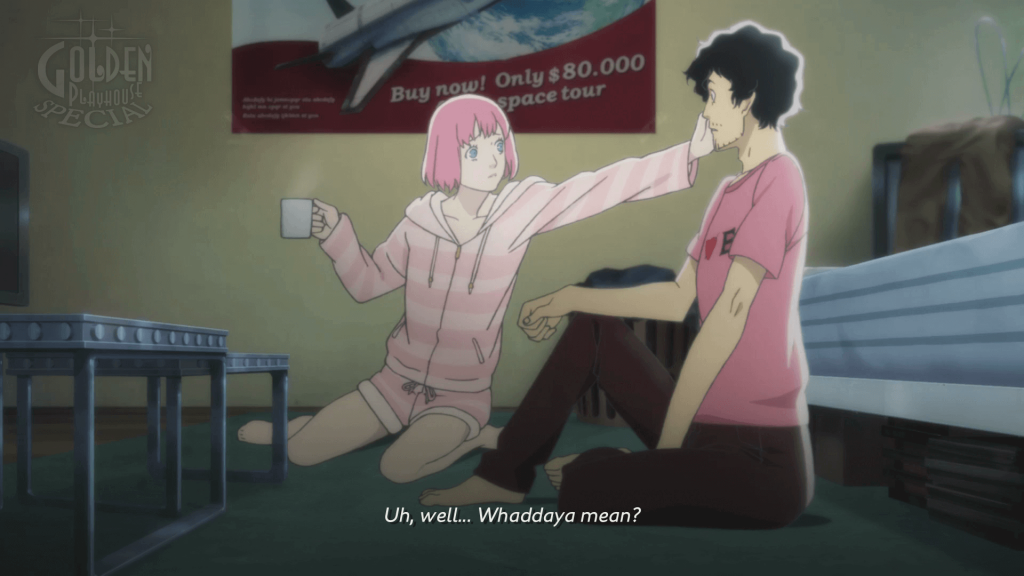 The developers recognized the balance the original love interests held and decided to go in a different direction — literally. Where order sat on one side of the spectrum and chaos on the other, Rin’s route posited growth in surprising new directions. This is reflected in the confessional questions Vincent answers each night, where, if answered correctly, the ones pertaining to Rin’s route will literally break the meter, showing a deviation from the original plan.

On the one hand, I absolutely commend Atlus for their work. This was no easy task, and while I have qualms with the execution, the concept is strong, despite the imperfections.

On the other hand… Rin’s inclusion was heavy-handed to the point where Catherine: Full Body became less a story about Vincent’s journey of introspection and self-improvement and instead about meeting Rin’s needs. Naturally, the storyline might gravitate towards discovering Rin, but the line between player and Vincent felt blurred — instead of Vincent and co. learning all about the new kid in town (and I do mean kid), it felt more like the dialog was geared towards returning players, constantly circling the fourth wall while never breaking it. 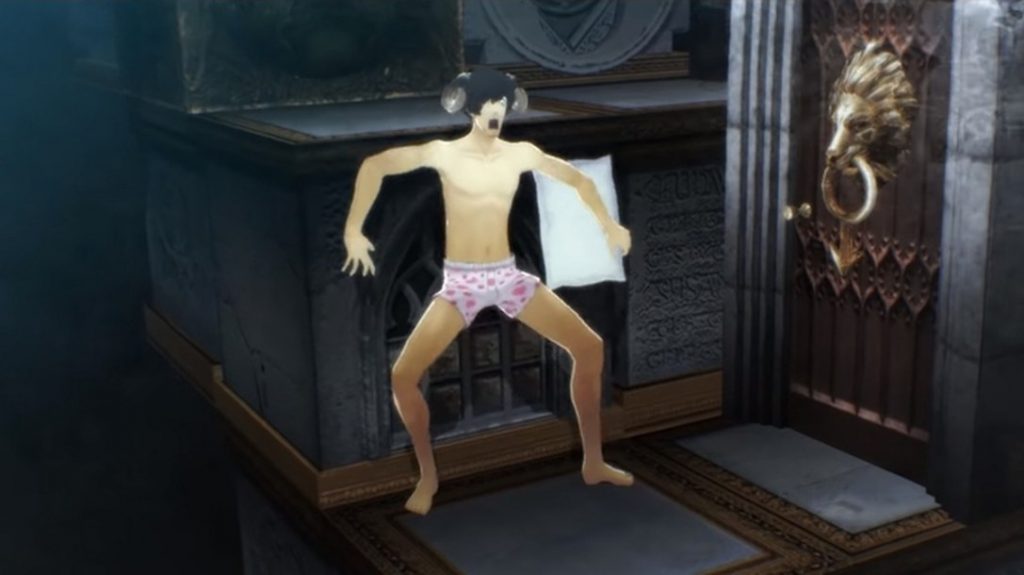 It was also really, really hard to shake Rin. In the original Catherine, Vincent escaped the stresses and anxiety of Katherine and the guilt and shame of Catherine at the Stray Sheep, the bar he and his friends frequently visit. A welcome respite from the outer world and its woes, Vincent is allowed to wallow in his sleep-deprived misery in-between nightmares, a veritable “safe space” from any troubles. In Catherine: Full Body, Rin conveniently works as the bar’s pianist, so she’s constantly available to speak with, the notion of a place free from daily strife now gone. In fact, her importance in her job only grows, eventually becoming a victory condition for some endings and forcing Vincent to even speak openly about Rin to his other love interests. Rin even lives next door to Vincent, as a neighbor “just so happened” to move out! What are the odds?

By the time night six rolled around while pursuing the original Katherine true ending route, Katherine felt even more like a nagging hen and Catherine felt like the gum on my shoe I just couldn’t get rid of. Both stood in the shadow of Rin, who Vincent vocally praised and transparently favored. If Katherine represented reality and Catherine a distraction, Rin was clearly an escape — someone who seemed to exist only to soothe Vincent’s inner demons because ¯\_(ツ)_/¯. Sweetly saying all the right things and showing Vincent a brand new way of looking at life, the other two love interests don’t stand a chance — tossed out like yesterday’s jam. 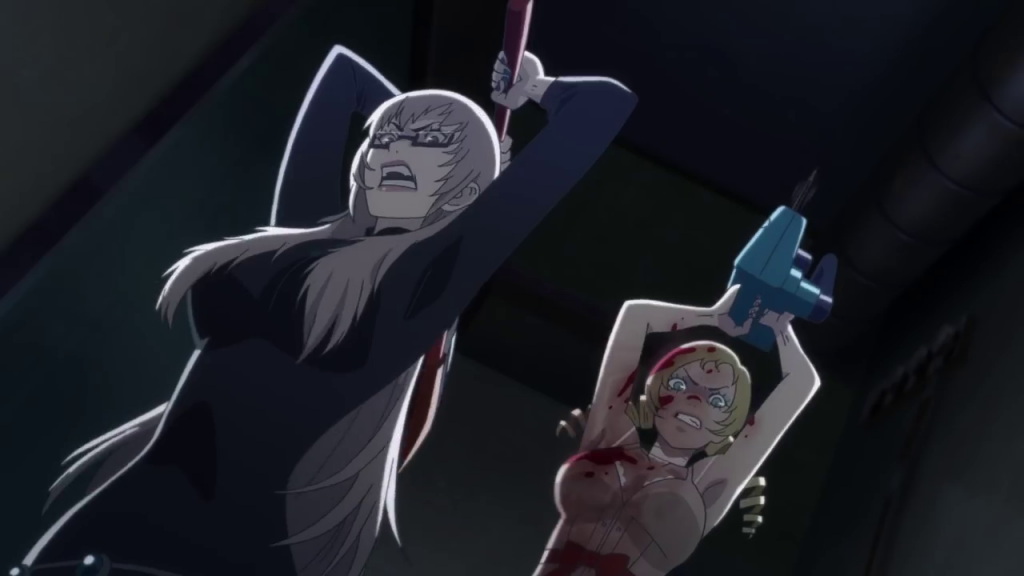 In the end, I’m left with mixed feelings; while I do think Atlus told the story they wanted to tell and did so in a way that not only respected the original order/chaos mechanic but tied back into Sumerian mythology, I was frustrated by the dramatic change in tone introduced by Rin’s existence. Vincent became a different person, certainly, but it was through Rin’s journey of self-discovery and acceptance that this happened, not necessarily instigated by Vincent’s desperate need to take charge of his own life. While I appreciate Rin as a character in her own right and resolved much of my resentment towards her after watching her endings, I still can’t shake the feeling that the original love interests lost their meaning. Am I being like Vincent and resisting the growth that Rin represents? Or am I trying to return to reality and deny the escapism Rin offers? The jury’s still out on that one.

At least the real love interest didn’t change… that much, anyway. 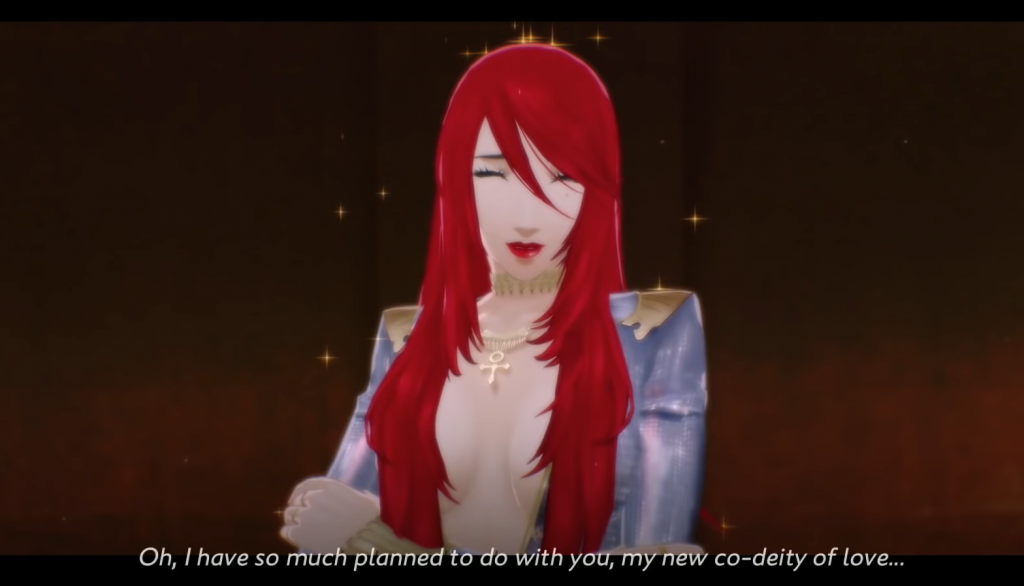 So, what’s the verdict?

Overall, Catherine: Full Body is an improvement on the original when everything is taken into consideration. The quality of life updates on the puzzle mode were sorely needed, the additional endings were arguably better for the supporting cast than the original ones, and all the bonus content aimed to amuse while staying on brand, right down to the sheep-shaped headgear that allowed Vincent to see everyone in their underwear. After this playthrough, I’m again left googling Mesopotamian/Sumerian mythology for hours each night, drawing perfectly woven parallels the deeper I go. Catherine is by far one of the most stunning gaming experiences to date, and Catherine: Full Body builds upon its glory. The Rin to my Vincent, Catherine: Full Body offers me a new way of looking at the game I’ve long considered perfection — perhaps, in time, I’ll accept this route as its true form.

Despite its flaws, Catherine: Full Body is a success no matter which way you look at it. Although any dialog surrounding Rin was heavy-handed at best, it still provided enough interest on a classic. In the same way you visit your hometown after being away for a decade and notice all the changes in familiar places, Catherine: Full Body’s alterations may come as a surprise to those who held the original in high regard. After the initial shock wears away, however, it’s clear to see the wisdom behind the choices made, and Atlus, yet again, achieves greatness. If you haven’t played the original Catherine, I strongly advise you to turn back now and enjoy its predecessor first; for everyone else, be like Vincent — take this new twist one block at a time and enjoy the ride.

Editor’s note: This review is based on a copy of Catherine: Full Body given to HeyPoorPlayer by the publisher.