Finding Yourself is Never Easy

Games like Alwa’s Legacy have always been ones that I’ve appreciated. Finding a Metroidvania nowadays (or ever, really) isn’t easy, and finding a good Metroidvania is even less so. While I love going back to the classics that gave the genre its name in the first place, branching out into the contemporary Metroidvania world is always fun, too—and, boy, is it ever easy to do that with a game like this.

Alwa’s Legacy is an excellent example of what the proper blending of new and old game mechanics should look like. It’s got enough retro-ness (is that a word?) in terms of both gameplay and aesthetics that playing it feels immediately comfortable, but enough modern ingenuity to keep things fresh and polished. Well, mostly polished, anyway. But, hey, a game doesn’t have to be perfect to be fun. And Alwa’s Legacy is a lot of fun.

Tell Me a Story 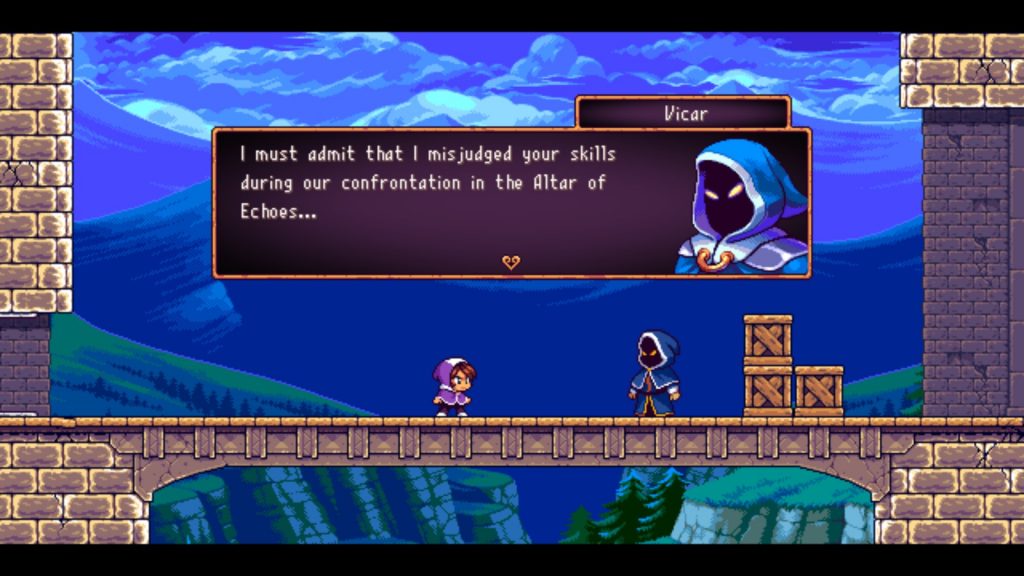 Much like its prequel, Alwa’s Awakening, Alwa’s Legacy follows the story of the magical girl Zoe who has been sent to Alwa to save it from the clutches of the dubious Vicar, with one significant difference—Zoe has no idea what she’s doing or where she is. As in, she’s an amnesiac. Everyone else remembers, though, especially her hooded adversary—who immediately attempts to thwart Zoe before she can even fully regain her bearings (and memory). Fortunately, Vicar’s magic, though powerful, wasn’t quite enough to seal the deal on Zoe’s demise. Thus, with nowhere to go but forward, Zoe once again (unwittingly) sets out on a quest to save the day.

So, I’ll, uh, be honest. I don’t quite understand what the writers were going for with this game’s story. Sure, the beginning makes sense, but it also feels as though it’s leading up to some kind of grand reveal that never happens. I beat the game, not knowing how Zoe lost her memory, why she was back in Alwa, and why everything was happening once again. Now, before I go any further, I’ll admit that I never played the first game, Alwa’s Legacy, and that what I know about the game is simply just stuff that I’ve looked up. However, with a game like Alwa’s Legacy—a game whose story is not its central focus—I don’t’ think that providing some extra filler for players regarding the previous game’s events would have hurt. And, even if this game had done that, I’m not sure that it would have answered everything, anyway.

A Legacy of Its Own 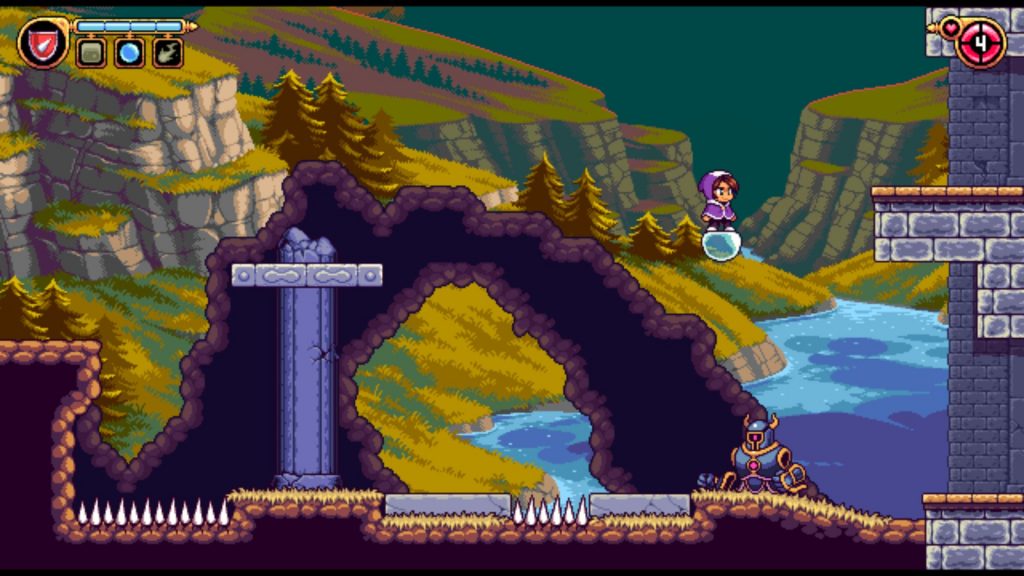 I guess you could say things are looking up!

If you were to ask me what part of Alwa’s Legacy helps it to stand out the most, I would most definitely say its minimalistic approach to gameplay. While its world mimics the same open, platform-based setting showcased by many of the Metroidvania greats out there, its approach to operating within the said world is markedly different. Rather than consistently empowering Zoe with a myriad of upgrades as you progress, Alwa’s Legacy gives the player most of what they’ll need during the first part of the game. Admittedly, Zoe’s arsenal isn’t the most exciting—consisting of a basic melee attack, and three different spells which let her create pushable blocks, floating bubbles that can be used as platforms, and fireball—and the small smattering of upgrades, save the mid-air dash, aren’t anything to fuss over, either. But that’s the beauty of it. This game does so much with so little.

From the very beginning of the game, Alwa’s Legacy wants players to know that they’re going to have to put in some effort if they’re going to win. There aren’t any crazy attacks that let you wipe out hordes of enemies, nor are there upgrades—hidden or otherwise— that will allow you to breeze through the game’s hard parts. Because of this, a lot of Alwa’s Legacy, despite being a Metroidvania, feels markedly more platformer-esque than other Metroidvania. To some people, that might not be so great. After all, it’s a blast being able to scour through treasure-packed lands, eagerly picking up any and every item in sight. Trust me; I know that. But there’s also something to be said about a game that forces you to get better as you play through it—something which Alwa’s Legacy certainly does well. 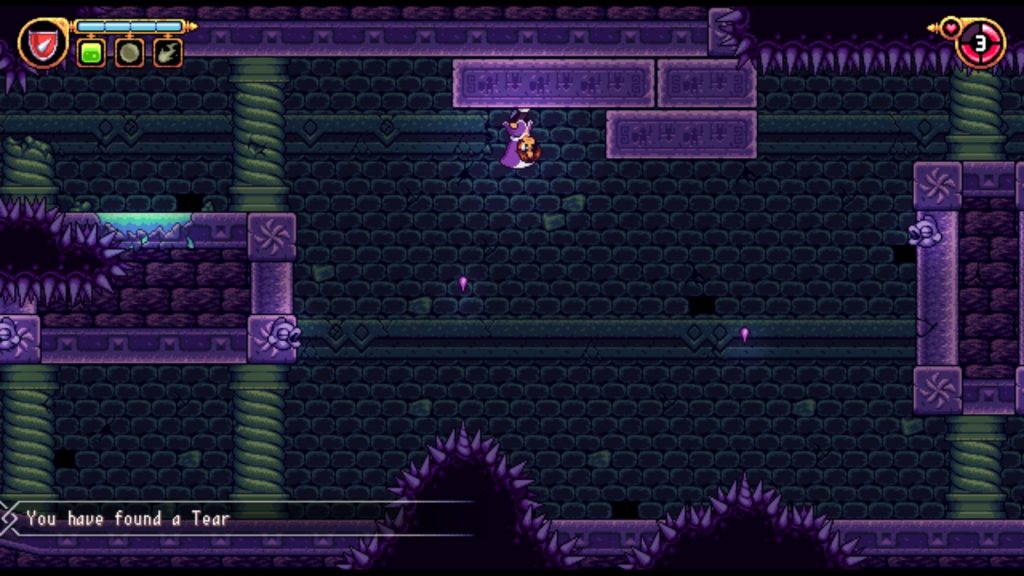 Has Zoe always been so… upside-down?

Yet another thing that places Alwa’s Legacy more firmly within the “platformer” genre than its Metroidvania brethren is the sheer number of gimmicks that this game throws at the player. And, before you ask, no, it’s not a bad thing in this case. Not at first, anyway. While the overworld is standard fare for the genre, the five main dungeons that the player explores are not. Be it managing water levels, time-travel, or gravity shenanigans; this game does a great job of making sure that none of its dungeons feel even remotely similar to one another.

Unfortunately, I don’t feel like this game executed its dungeons perfectly because there’s some weird scaling going on with its difficulty. Exploring Alwa’s overworld isn’t exactly something that you could consider to be “difficult.” Sure, there are a few tricky parts here and there, but everything is pretty player-friendly overall. You could say the same thing about the game’s first three dungeons. They’re harder than the overworld, and each subsequent dungeon is harder than the last, but there’s still not anything that I would consider to be “overly difficult.” 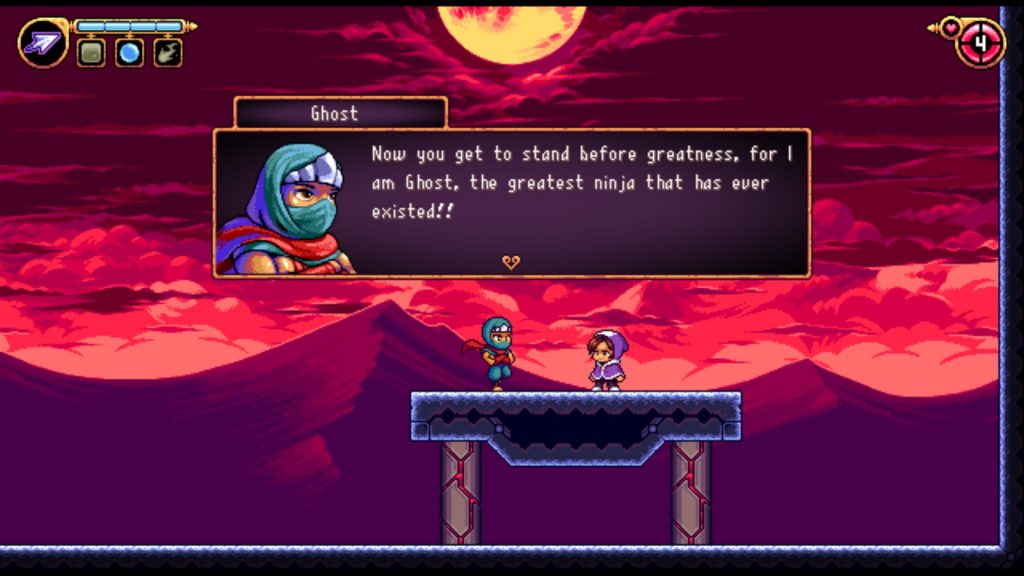 You wouldn’t happen to know how to get to the top of this place, would you?

Then, there are the game’s last two dungeons—the “final hour” of Alwa’s Legacy, if you will. And, boy, did these two throw me for a loop. Now, there’s not really anything bad that I can say about the second-to-last dungeon other than the fact that it featured a difficulty jump that was noticeably more drastic than transitioning between any of the other previous dungeons. The final dungeon of the game is a different story, though. Not only was this part of the game way harder than any other part—to the point of being offputting, even—but it was a little too cryptic for its own good, too. I’m not going to bother detailing how I managed to get through the final part of the game, but I’ll to be honest; I don’t think that I beat the game in the way that it was intended to be overcome. However, if what I did was correct, then there is absolutely no way that it should be. The ability to teleport should be something cool and fun, not something that’s thrown in to make a dungeon even more annoying than it already would otherwise be. Don’t get me wrong; I’m okay with a challenge. I just want to be able to see them coming.

Alwa’s Legacy isn’t perfect. My rant probably made that clear. However, despite having said what I said, I would still encourage you to check this game out if you like Metroidvanias. Its flaws, though present, are vastly outweighed by its charms. I promise. The world needs more good Metroidvanias. And, if developers like Elden Pixels are in charge of bringing those to us, especially if they’re willing to continue growing as they have been, then we’re definitely in good hands.

Full disclosure: This review is based on a Switch copy of Alwa’s Legacy given to Hey Poor Player by the publisher.