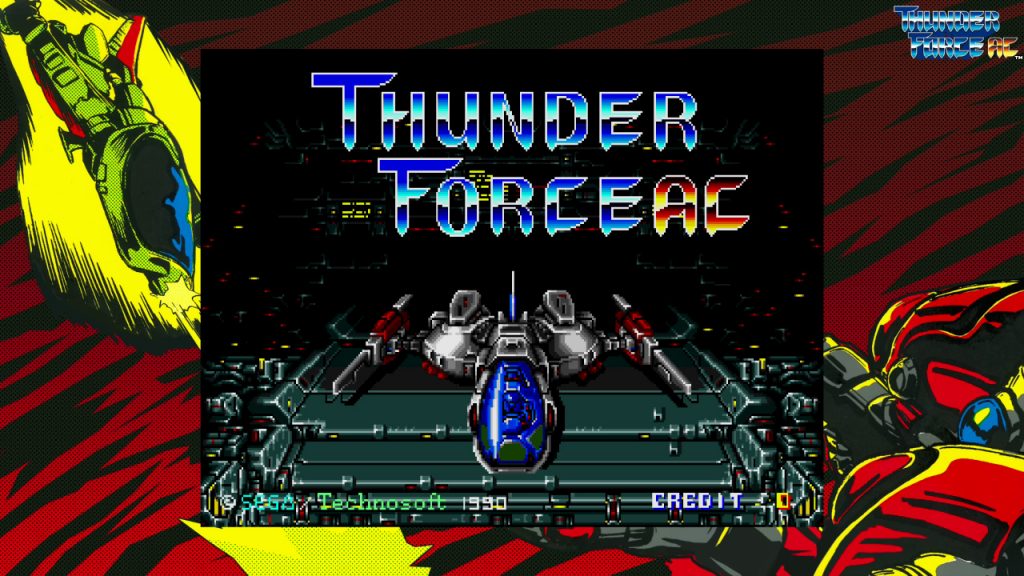 While perhaps not as well known as more popular shoot-’em-up franchises like Gradius and R-Type, Technosoft’s Thunder Force series has been around for a long time.  First appearing on Japanese computers in 1983, the series found its footing with a trio of superb sequels for the Sega Genesis in the 1990s. Following the success of Thunder Force III, Technosoft developed an arcade port of the game on Sega’s System C2 arcade hardware. Dubbed Thunder Force AC, this overhauled version of the game (the only entry in the series to see a coin-op release) upped the ante by introducing new weapons, stages, and gameplay tweaks to the hugely successful 16-bit shooter.

Now, thirty years after its arcade debut, Sega and M2 have delivered SEGA AGES Thunder Force AC to the Nintendo Switch. Featuring a new, less challenging difficulty mode, additional ships to pilot, and a handful of welcome visual and interface updates, it’s a great port that no Thunder Force fan should pass up. 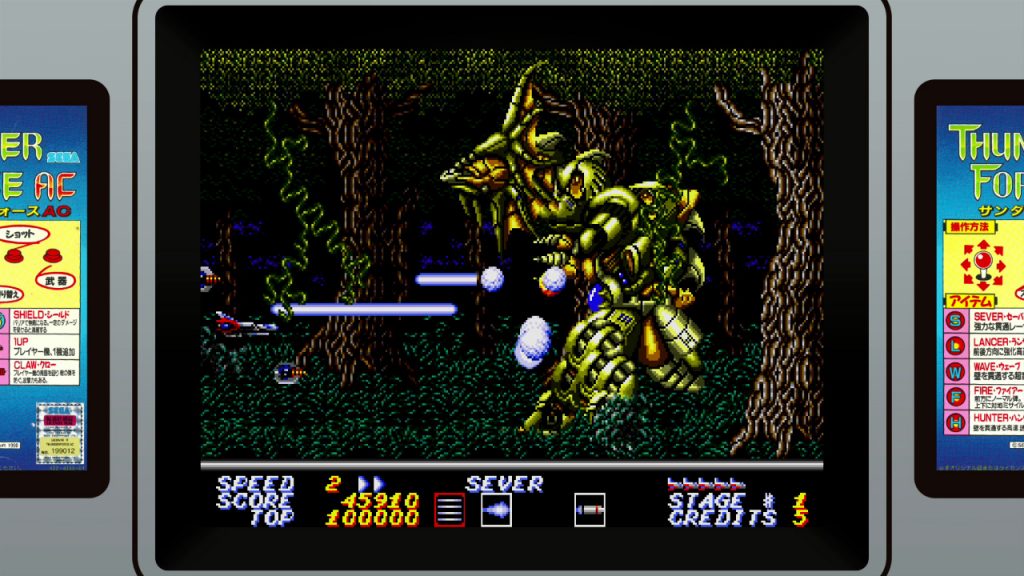 Thunder Force AC has no shortage of challenging bosses to battle.

There’s a story here, but it doesn’t matter (and honestly, the translation is pretty abysmal). The evil ORN Empire is up to no good, and it’s up to you to soar over the surface of eight unique stages to battle their forces and ultimately reduce their base to twisted space junk.  The locales are varied and include a mix of levels from Thunder Force III and Thunder Force II on the Sega Genesis. They include planets covered in dense forests, rocky caverns that spew burning hot magma into the air, ancient temples covered in centuries of overgrowth, to the interior of massive ORN space stations teeming with gun emplacements.

With a limited number of credits at your disposal, you’ll need to master your ship’s various weapon types to survive. You’ll begin the game with your standard lasers. As you destroy enemy ships, you’ll collect a wide range of weapon types. These power-ups include homing shots, missiles that explode on the floor and ceiling and leave a trail of napalm-like destruction in their wake, and rear-facing shots to take out any baddies foolish enough to try to approach from behind, just to name a few.

Unlike most horizontal shooters where weapons you collect replace your current shot type, in SEGA AGES Thunder Force AC, you can swap through these weapons with the touch of a button. However, when you die, you’ll lose whichever one you had equipped at the time you bit the dust. So you’ll need to choose your weapons carefully so that you can save them for when you’ll need them most.

And you’re going to be dying a lot in this game. Technosoft’s Thunder Force series has always been knowns for its punishing difficulty. And, considering SEGA AGES Thunder Force AC is a conversion of a coin-op, it should come as no surprise to learn the game is no exception to this rule. Enemy ships are everywhere, and it can often be challenging to keep track of what’s going on as enemy bullets, explosions, and massive boss sprites fill the screen. Thankfully, developer M2 has added a few new features to help give newcomers a fighting chance in their battle against the ORN Empire. 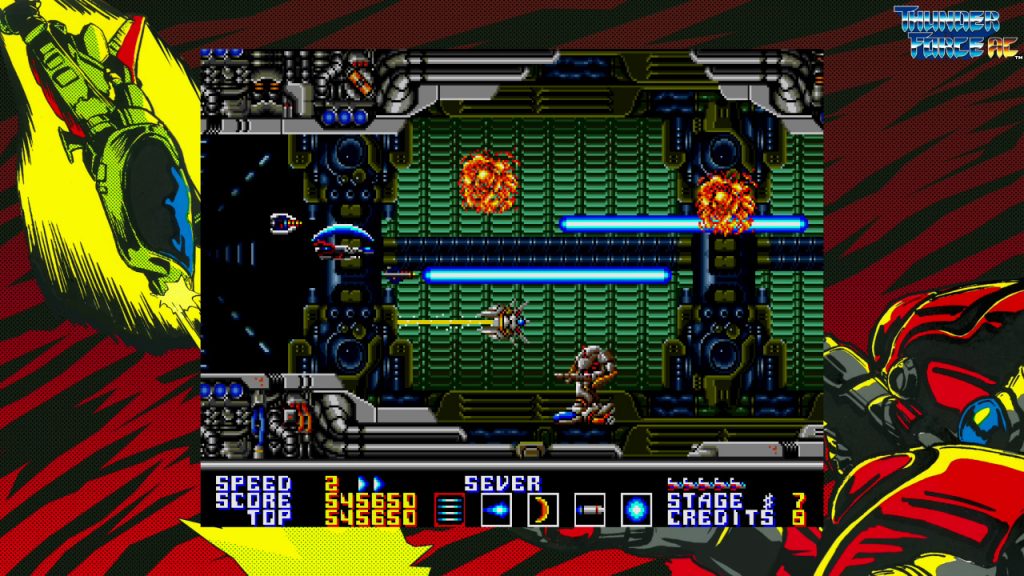 SEGA AGES Thunder Force AC features many weapons that you’ll need to familiarize yourself with if you wish to defeat the evil ORN forces.

Among the additions introduced in SEGA AGES Thunder Force AC is the somewhat disparagingly titled Kids Mode. This mode ups your number of credits continues from 6 to 9, starts you out with a shield, and even allows you to keep your weapons when you die. Despite these bonuses, Thunder Force AC is still a pretty challenging experience that requires lots of patience and memorization (or, if you’re impatient, lots of save states) to make your way through. Still, Kids Mode is a great tool to help newcomers learn the ropes before going all-in on the grueling Arcade Mode.

SEGA AGES Thunder Force III also adds a few unlockable ships – each armed with their unique arsenal of weapons to master. These ships include Thunder Force IV’s mighty Rynex and the Styx Mass Production Model. The latter one has the bonus of awarding you extra points if you destroy an enemy with a reverse shot as a flame shoots from the rear of your ship when changing speeds. While a bit tricky to get used to, it’s an interesting mechanic. No doubt, score-chasers are going to be taking advantage of it as they attempt to climb the leaderboards.

In addition to the Kids Mode and new ships to choose from, SEGA AGES Thunder Force AC includes a host of visual options to choose from. A CRT filter is available to make the game look more like the original arcade release on modern TVs. And, just like the previously released SEGA AGES G-LOC: Air Battle, there’s a cabinet mode that makes it look as if you’re playing on a dedicated Thunder Force AC arcade machine. It’s a neat idea, for sure. The problem is the screen is so small in this mode that it can make it hard to see enemy shots and ships. That said, it’s hard to imagine many players will choose this option when attempting a serious playthrough of the game. Still, it’s a fun extra that pays tribute to the original game.

Fire In The Sky 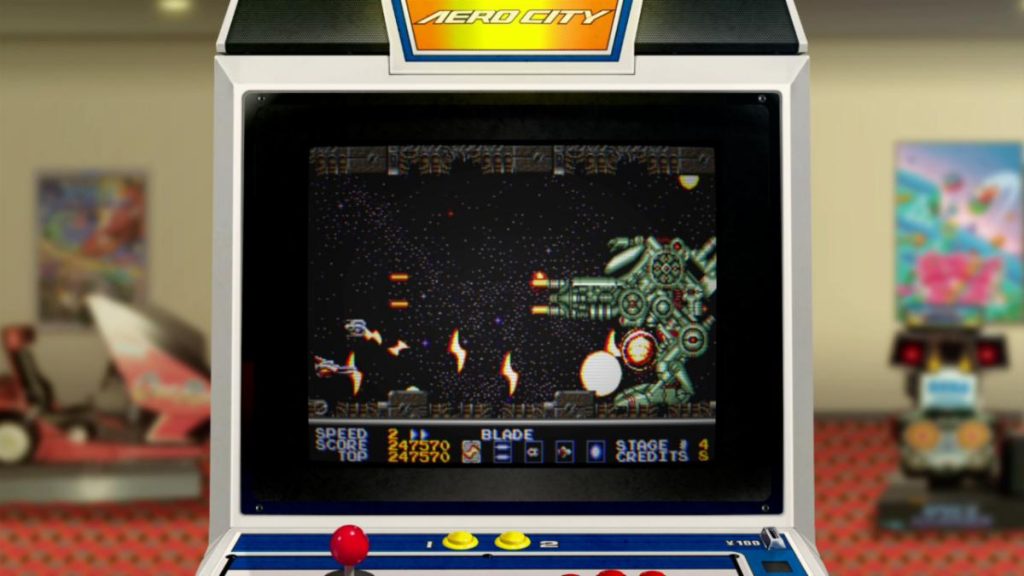 Cabinet Mode is a fun concept, but a bit too cramped to enjoy.

As a longtime fan of the Thunder Force series, I couldn’t be happier to see SEGA AGES Thunder Force AC soar onto the Switch. With a satisfying blend of challenging gameplay, great visuals, and an incredible soundtrack courtesy of composer Toshiharu Yamanishi, it’s an exceptional shooter that no fan of the series should miss. The addition of the Rynex and Styx Mass Production Model ships adds plenty of replayability to the game. And the new Kids Mode is perfect for series newcomers or casual players looking to learn the ropes before tackling the core game’s meatier challenge. If you enjoyed 2018’s SEGA AGES Thunder Force IV and are hungry for more, this is one game well worth adding to your Switch library.