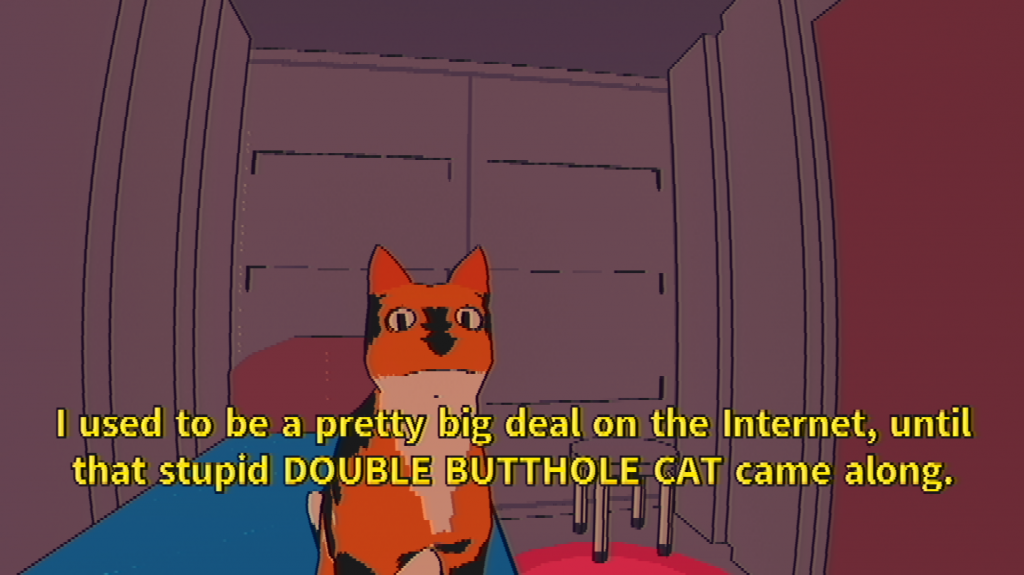 This game is deranged.

I don’t mean that in a bad way — not in the slightest. Delightfully deranged is more like it.

But that’s what’s great about a Devolver Digital game. They’re known for solid titles, and Sludge Life, developed by Terri Vellman and Doseone, is but the latest in their fantastic library of must-play games — including this one. Free for a year on the Epic Games Store with a future launch to the Nintendo Switch, there really isn’t a reason why Sludge Life shouldn’t be added to any gamer’s collection, but I’ll write a few hundred more words to further convince you that you need this batshit insane, gloriously wild game. 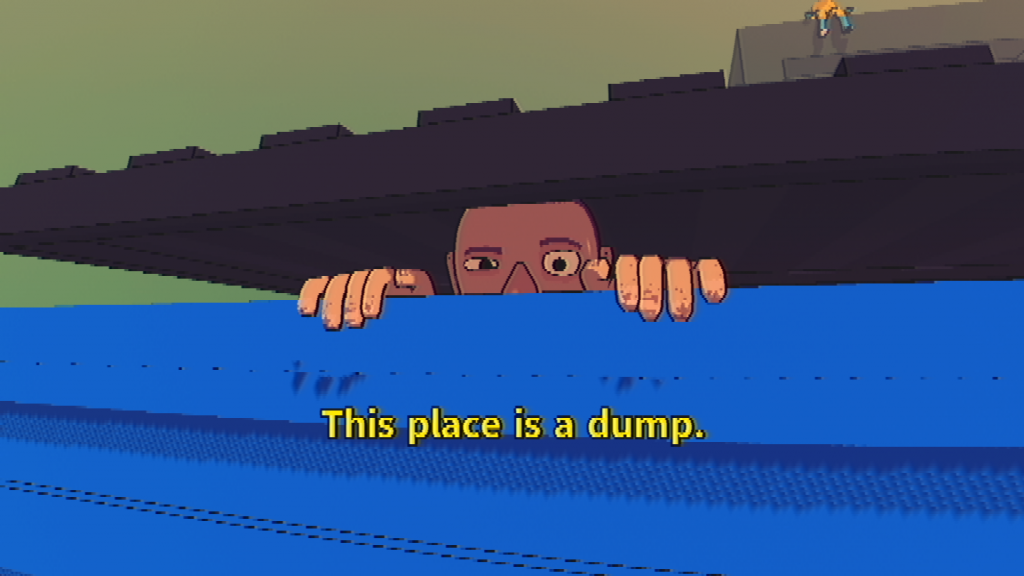 Sludge Life has players taking the role of GHOST, a tagger in the putrid city of Glug. Glug is a legitimate sludge-filled slum, where buildings must be built higher than the oozing black slime created by companies that “shit where they eat.” For the citizens of Glug, there are no hopes, no dreams, and no brighter future — they must either work for the corporate overlords and keep this slimy cycle going, or waste away any and all potential on drugs and other hedonistic pursuits. Only the taggers are free.

That’s where you come in — as GHOST, you must find the perfect tagging spots and show the city you mean business. Tag enough spots and other taggers will soon come to respect you, even asking to collaborate with you in certain areas. It’s time to paint the town green — can you find all 100 tagging spots and become the best tagger Glug has ever seen? 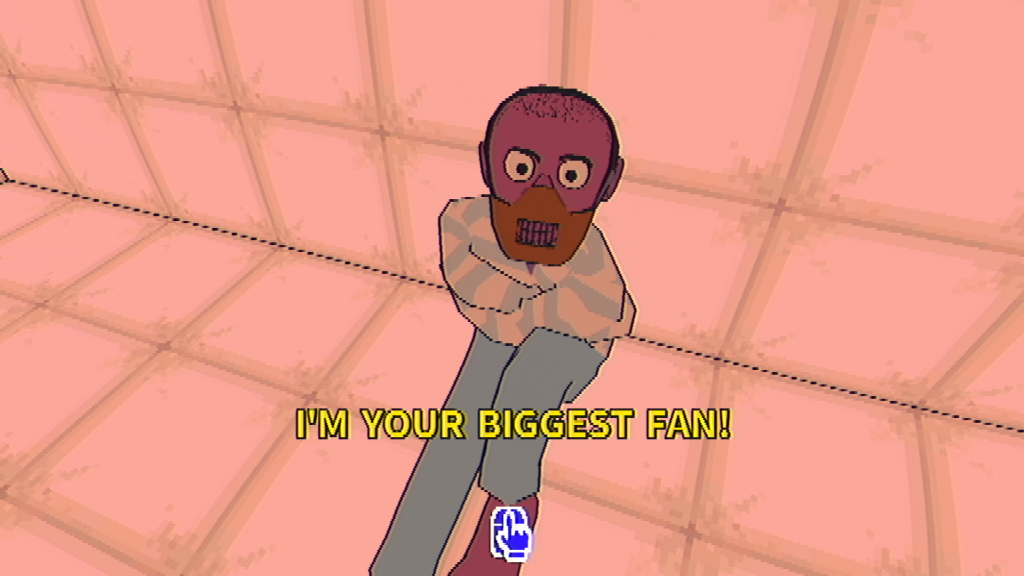 The controls are pretty straightforward and build as you go: WASD moves GHOST, while the mouse accounts for direction. As you pick up new tools, new controls will unlock, such as E for using the Vandal’s Eyes to find tagging locations and Q to use the Warper to be teleported back to an anchored location. While the controls certainly feel intuitive enough, they do take some time getting used to, and I can’t help but wonder if the Sludge Life is better played on a controller. With that being said, I found no real issues with the scheme, although I’m certain speed-running Sludge Life will be best handled on the Switch.

Sludge Life is touted as a “first-person / open-world / vandalism-centric” game, which, while true, doesn’t do itself enough justice. One of the biggest surprises for me in Sludge Life was just how alive the city was despite it being absolutely filthy. Every NPC you speak to feels just a part of Glug as the buildings or containers, and they all have so much to say. Additionally, nothing is a throwaway comment; you might laugh at the crazy guy who tells you pigeons control the media, only to open a door and find a room full of pigeons tapping away at their computers under the “NewsBeak” logo. It’s like that with every reference, and these callbacks take exploration up several notches. 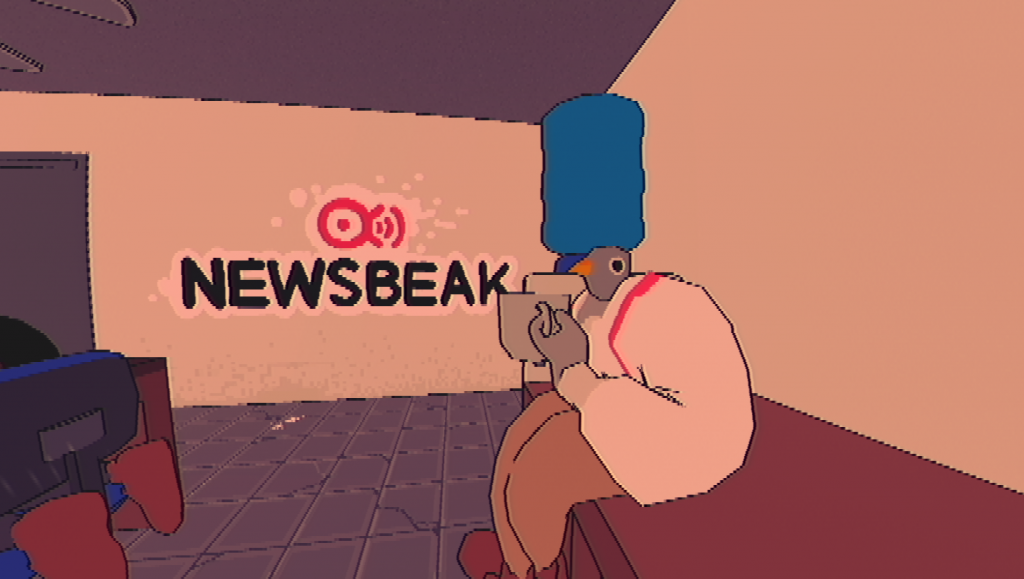 The aesthetics are fantastic in Sludge Life — giving off that late 90s vibe, this would have been right at home on the Dreamcast. The music is also super chill; do yourself a favor and just zone out to it, especially the in-game track, Bubble Up, given to you by BIG MUD. The feeling you get overall, though, is perhaps Sludge Life’s best accomplishment, as you really do feel like a hopeless kid with nothing to lose in a sea of grime and muck. So smoke up, get high, tag shit and almost die — why not? A better tomorrow isn’t coming anyway.

I think that’s my favorite part of Sludge Life; a topical take on classism and corporate greed, Sludge Life shows the extreme ugliness of unfettered capitalism. The citizens of Glug wake up each day to waste away slaving for company profits, and for what? Not even a dime is coming back to this shithole, so why bother continuing? 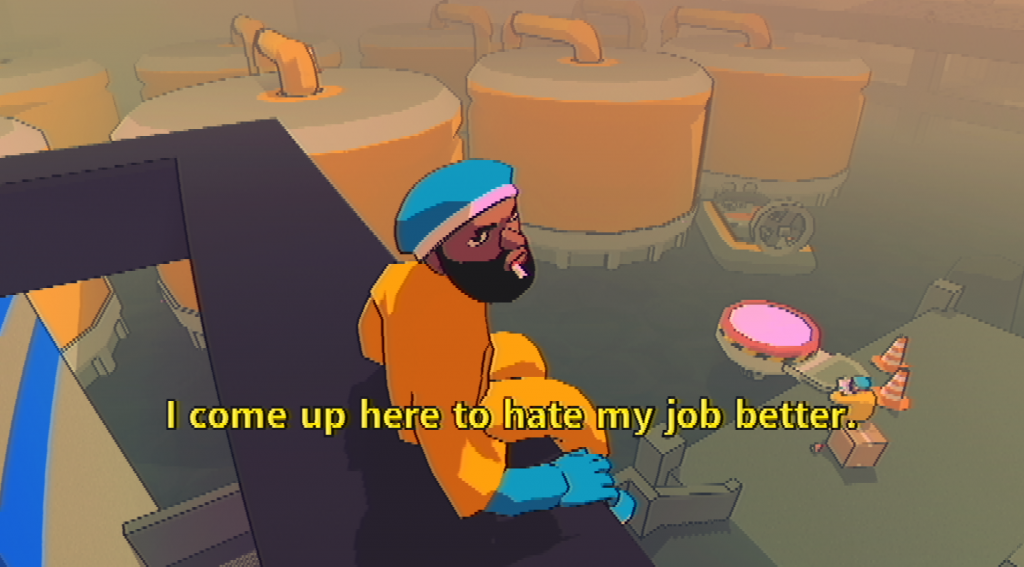 At this point, the wacky facade starts to strip away and you see Sludge Life for what it really is. You recognize that you, GHOST, woke up one day and decided enough was enough — you were going to take back control of your destiny. It’s telling that, in a game where the entire workforce is on strike demanding change, your only options are to escape Glug or nuke it. There’s no saving this grimey wasteland, no cleaning it up and making the community better; instead, it’s leaving, or blowing it up. Glug is far beyond the point of no return, and there’s really no recourse except to be rid of it or wipe it from the face of the Earth.

From giant babies to vampires, from talking cats to cats with two buttholes, to snakes in toilets and a guy wearing the exact same pattern as the wallpaper in an attempt to hide from his murderous roommate, Sludge Life is wonderfully mad, and I think the aesthetic really helps sell this insanity. I’m certainly feeling Jet Set Radio vibes in its gameplay, but in terms of how it looks I’m reminded of every Dreamcast or PS1 game I wasn’t allowed to play as a child. The ones that didn’t have clear marketing but absolutely grabbed your eye. The sleeper hits. The cult classics. If you know what I’m talking about, Sludge Life is it.

Sludge Life is the perfect example of open world done right. It doesn’t matter how big the world is as long as it’s chock full of interesting things to explore. Despite getting all three endings, I know there was plenty that I missed; Glug may be abhorrently disgusting, but just knowing that there’s more to discover means it’s calling back to me. I don’t know what else to say folks — if you need a delightfully deranged title where there’s more than meets the eye (and, may I remind you, is FREE), please, please, please grab Sludge Life.

Editor’s note: This review is based on a copy of Sludge Life given to HeyPoorPlayer by the publisher.