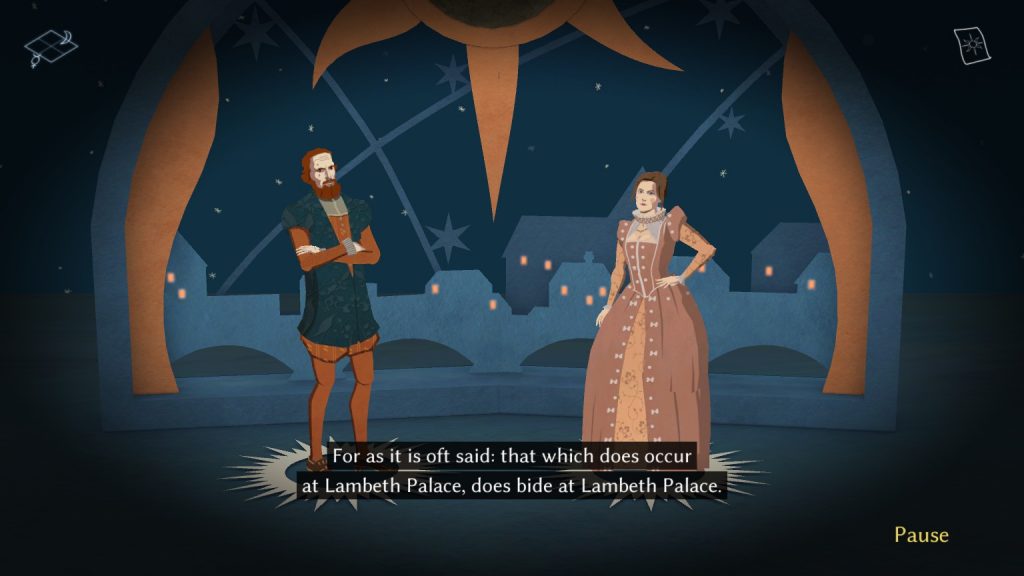 I’ve already documented my difficulties with keeping up with my backlog, and although I’m nowhere near as bad as I used to be when it comes to adding to the pile, I still let good games sit for far too long. So when Steam held its Spring Cleaning initiative, I decided to take advantage of it and play at least one game it suggested. I’d already been thinking about Astrologaster, so it was as if the stars themselves aligned when the title was one of the first options offered. Without delay, I promptly installed Astrologaster; little did I know what an absolute treat the game would prove to be.

Developed and published by Nyamnyam, Astrologaster originally released a little over a year ago on both Steam and Mobile platforms. The game is touted as being “based on a true – and truly ridiculous – story” (more on that later). Having amassed near-perfect player reviews across the board, Astrologaster is a beloved title that tickles both History and Theatre enthusiasts fancy as well as niche gamers alike. 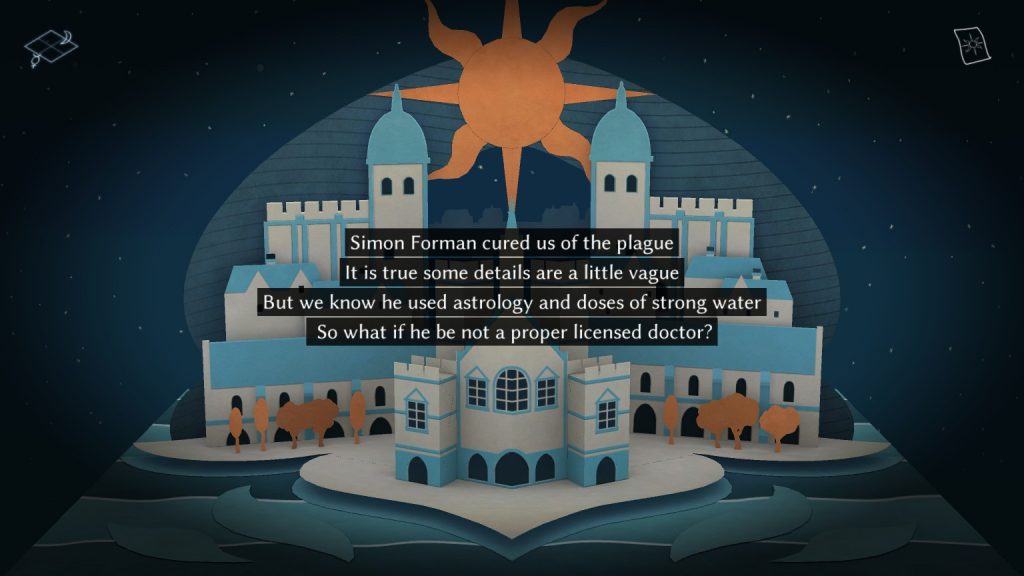 Our story unfolds — literally — on “Doctor” Simon Forman, a doctor of “astrology and physik” without a medical license to his name. ‘Tis true he did create a healing concoction  he named “strong water” that cured England of the plague back in the late 1500s, but… you know, not having a license is kind of a big deal according to the College of Physicians, so obtaining one becomes the overarching point of the game. How, you ask? By obtaining at least eight letters of recommendation from patients, or “querents” who can vouch for your restorative methods. Look to the stars and provide an alternative care plan based off your readings to ensure you keep your livelihood — and your head.

Dr. Forman’s querents are an interesting lot and can largely be broken up into three main groups: historical characters, current-event parallels, and original plot-drivers. Historical characters include the first English-language feminist poet Emilia Lanier and Queen Elizabeth I’s favorite-turned-foe Robert Devereux, 2nd Earl of Essex. Having an intimate knowledge of Elizabethan Era history isn’t required, but it certainly helps to enhance gameplay and can improve your chances regarding making the correct decisions. For example, one particularly nosy woman asks for assurance that God will spare the English somehow after hearing rumors that the Spanish Armada is on the way. Although Dr. Forman needs to peer into the stars to see the future, a quick refresher on the past will assist players in making the right decision and alleviate all fears the woman has, as it was the weather of all things that defeated the Spanish Armada that day. 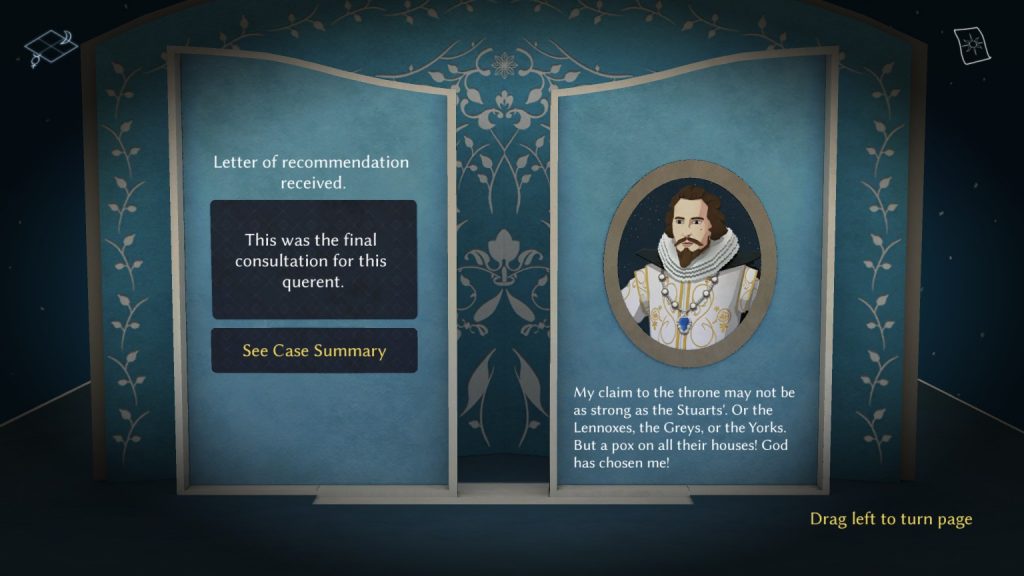 Then there were the parallels to today’s world, which delightfully blossomed over time. Take, for example, Mr. Nicholas Mugg, whose anxious nature and abundance of spare time turned him into a veritable hypochondriac. I’d legitimately let out a groan each time he came to visit my chambers, as his “disease of the week” was always something rare and random. Dr. Forman felt the same way I did, thankfully, and handled the matter with the care and grace only a gentlemanly doctor could possess. When Mr. Mugg asserted he had consumed too many cherries, which, according to some duchess were no doubt poisonous, Dr. Forman prescribed actual sugar to Mr. Mugg to cure him of all his ails, alluding to the use of placebos in modern medicine.

Additionally, the storyline of Mr. Humphrey Bell, a young male actor who portrayed the female parts in Shakespeare’s plays, took the time to showcase wage inequality along gender lines. Mr. Bell at first comes to Dr. Forman to learn how to lose weight despite already being very trim; later, he asks for advice on how to address pay disparity between actors playing male parts vs. actors playing female parts. Every time, Dr. Forman consults the stars, and every time, Mr. Bell fights the good fight for a warped male-experienced version of feminism in ye olde actor’s guilde. 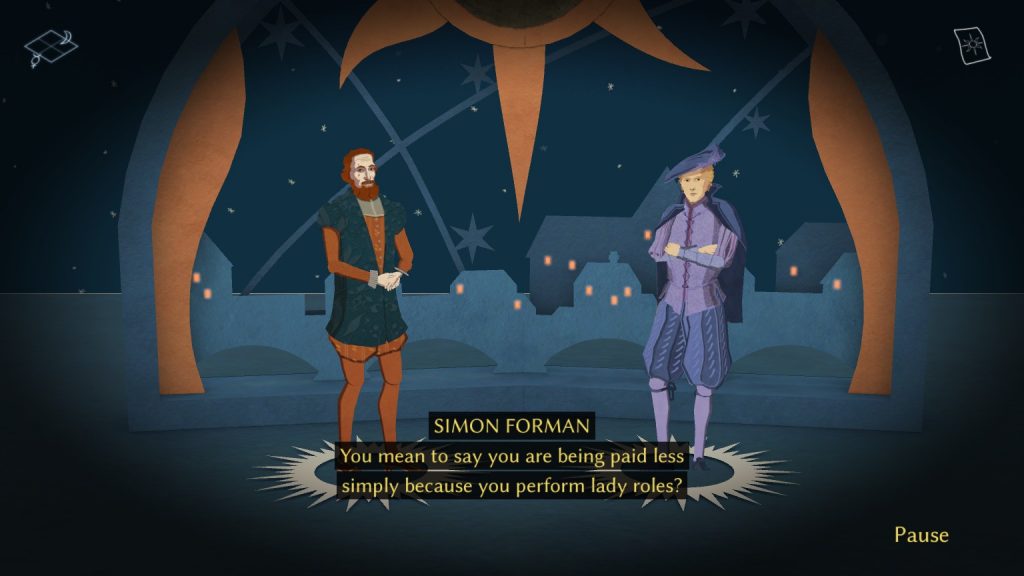 Of course, not everything is an allegory to today’s world — some querents exist merely to drive Astrologaster’s original plot forward. Take, for example, Avis Allen, a married Catholic woman in the midst of a Protestant reformation who initially seeks Dr. Forman’s assistance with her pregnancy. Her visits soon turn into more intimate affairs, and coitus post consultatio occurs fairly frequently. Dr. Forman’s foray with a married woman is a tumultuous one, and her visit either end in a hot-headed or a hot and heavy manner. Either way, they’re all very exciting.

The colorful characters in Astrologaster are all vastly different, but they’re all connected by a common thread: their need for Dr. Forman’s astrological readings. Whether it be a medical diagnosis, financial advice, or relationship troubles, Dr. Forman has all the answers — all he needs to do is correctly read the stars. 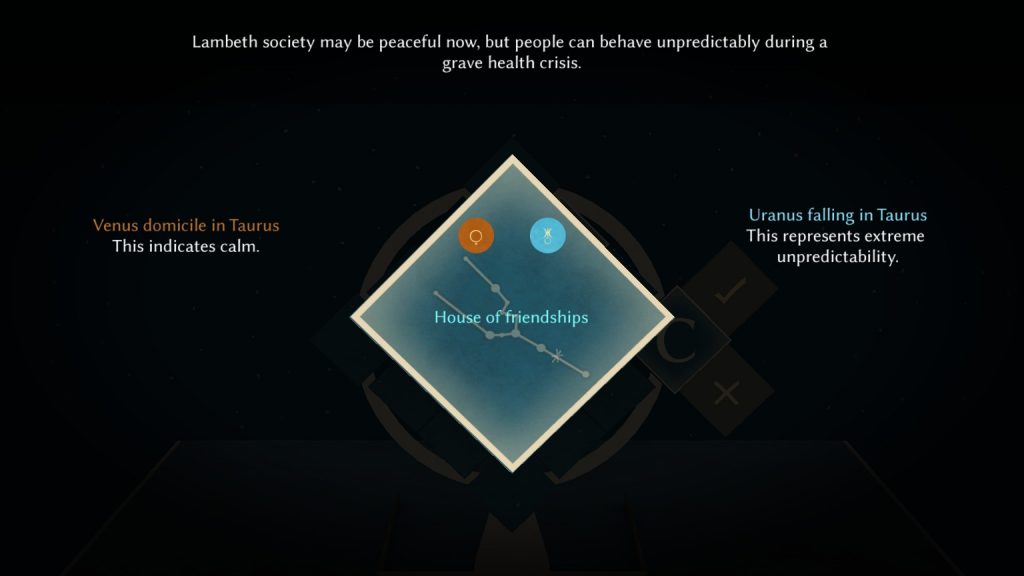 It’s at this point that the player finally takes the reins in Astrologaster; until now, Astrologaster acts less like a game and more like a play, with one or two characters speaking on what resembles a stage. Only when Dr. Forman performs his readings do the players have any input at all, choosing from two or three possible readings to dictate what the querents should do. Choosing correctly makes the querent pleased with Dr. Forman’s services, who will then be more likely to offer a letter of recommendation, while an incorrect decision can lead to an unhappy querent — or worse.

This mechanic is, while well-executed, slightly lacking. Although I feel confident enough in my historical knowledge, I know absolutely nothing about astrology; as such, I can’t help but feel like I missed out on what might have been obvious clues that I should have picked up on. I sorely wished for more of a learning opportunity with astrological references that could at least help me lead up to making what I felt was the right decision. Instead, I had to make do with playing through a second time to try different results, which, in all fairness, was extremely enjoyable. Nonetheless, it would have been great to learn about astrology in Astrologaster — perhaps a missed opportunity more than anything. 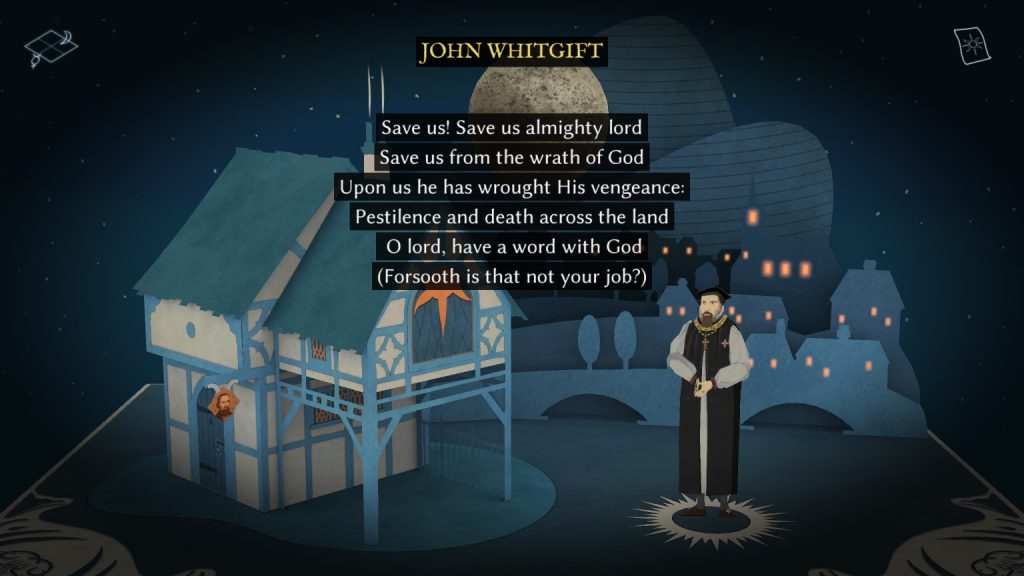 Despite the minimal input needed from the player, Astrologaster is absolutely engaging. The voice acting is some of the best I’ve heard, making the characters seem more alive than they actually are. I can almost imagine the recording booth being filled with legitimate theatre actors putting on a play and just recording their lines as they walk across the stage. It’s lively, it’s enthralling, and it’s full of fun energy.

Where Astrologaster really shines is its writing — this is some of the best visual novel writing you’re ever going to come across. For one, as it’s a biographical/historical piece, it aims to set the stage, so to speak, by adjusting the language used to better match the time. They’re not going around speaking true Elizabethan Era English, of course, but the use of certain phrases and words helps remind players exactly what time period the characters are in. Additionally, the witty, often guffaw-inducing writing is on par with the likes of Phoenix Wright, and sucks the player in for far longer than they possibly anticipated. I particularly loved the small songs announcing each querent’s visit, as they acted as musical hints that unironically bopped. Madrigal gang, rise up! 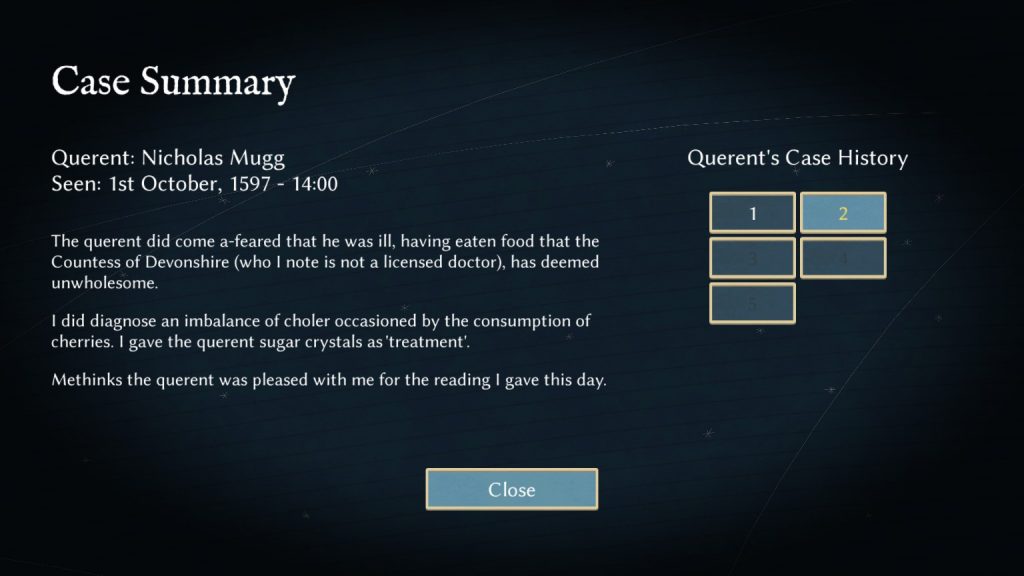 Despite all my raving for this fantastic game thus far, none of what I have mentioned is the best part. The story is scintillating, the voice acting superb, the music sublime, and the mechanic is something new, certainly, but the crowning achievement? The fact that all of this actually happened. Well — almost all of it.

Remember how I said earlier this was “based on a true – and truly ridiculous – story?” Turns out Dr. Simon Forman was a real would-be doctor of “astrology and physik” whose radical practices of “reading the stars for underlying medical causes” and “writing down a summary of the querent’s visit” (that latter one is called medical progress notes these days) were definitely scandalous according to the College of Physicians. In fact, thanks in part to his case notes, we know an awful lot about people such as Emilia Lanier – Shakespeare’s “Dark Lady,” who was, in fact, one of his querents! Astrologaster even alludes to the fact that he correctly predicted his own death *and* that he would be posthumously implicated in a murder plot. After reading up on Dr. Forman online, I can definitely see why the game devs decided to make Astrologaster, and I’m pretty grateful they did this bizarre — and bizarrely important — historical figure justice.

Astrologaster surprised me — I already knew I loved the concept when I purchased the game, but I didn’t know how much I’d love the entire package. The execution was magnificently well done — I highly doubt I’d find a History or Theatre enthusiast who dislikes the title — and delightfully entertaining. From start to finish, Astrologaster delivers; if you enjoy games off the beaten path that so brilliantly achieve all their goals, then our astrological readings indicate you’ll love Astrologaster. It’s in the stars!

Editor’s note: This review is based on a copy of  Astrologaster purchased by the reviewer.