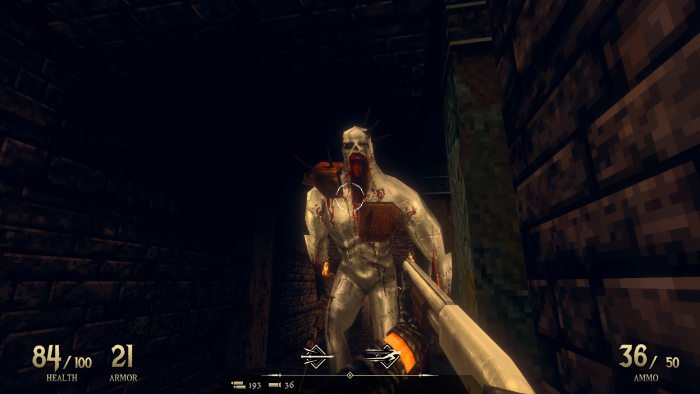 Had enough of the retro FPS resurgence yet? It won’t be dying down anytime soon, as many have become classics in their own right while new titles are announced and released on a regular basis. Good thing too. I mean, it’s something we here at HeyPoorPlayer appreciate completely. That’s why we were eager to try out yet another retro-style FPS named Hell Hunt, which developer T19 was generous enough to let us sample. It’s got classic weapons, low-poly pixel graphics, complex level design, ugly abominations to shoot, and tons of gore. Already, we’re off to a great start.

The game puts you in the dank shoes of a demon hunter. You’ll travel from one Hellish location to the next, slaughtering humanoid demons and exploring the wretched corners of their domain. Beyond that, there is currently little in the way of lore. Are you a lost soul hiding his way out? Are you a member of the living, becoming a necronaut? Is it the end of the world and you’re doing what you must to survive? We may never know, but at least we’ll have a lot of fun thinking about it.

Go out and get some exorcise. 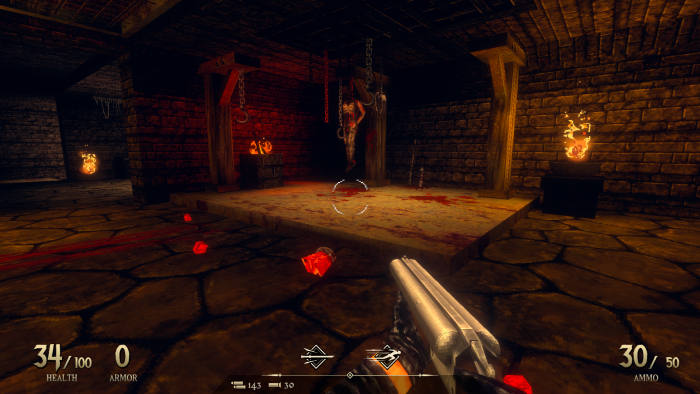 The only thing that *is* certain is this: you’re a gun-toting badass with a serious score to settle. And that’s what makes this game so much fun to play. The demonic jerks you face aren’t pushers, but your weapons feel strong and your movement is fast and elegant. Hell Hunt includes the ability to dash, greatly increasing speed and allowing for simple platforming or even strategic dodging in prickly encounters. In order to avoid spam and abuse of this feature, a cool down period of a few seconds occurs before it may be used again. Nonetheless, it remains extremely useful and, with a bit of practice, becomes indispensable in both exploration and combat.

As mentioned, the gunplay is superb. You start off with a pair of swords which do decent damage to the weaker enemies. These can be combined at the hilt and then thrown like a javelin, instantly transforming them from a melee weapon to a ranged one and dealing a lot of damage. The only drawback is that this attack requires a cool down period much like the dashing. It’s fun and helpful, and would be a life-saver in dire situations when you run out of ammo. Fortunately, that doesn’t seem to be a problem in Hell Hunt, as everything is balanced to perfection.

Hell was never quite so much fun. 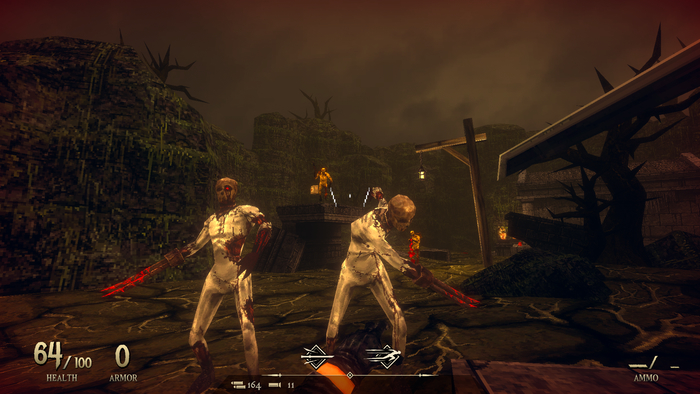 The other weapons on show include the standard shotguns, both single- and double-barrel, and both are a literal blast to use. You’ll also be treated to dual pistols, and although these aren’t particularly powerful, they’re still useful and ammo for them is plentiful.

A shooter worth its salt also has to have good level design, and fortunately, Hell Hunt excels in this regard. Though only two levels proper are available in the demo we played, they are significantly large and labyrinthine. The second level in particular is a gargantuan underground nightmare of twists and turns, corridors and carnage, and it took me forever to explore and beat. And I loved every minute of it. If the level design in the final product is this good, I’m sold. Naturally, this will deter those less familiar with the genre, but for old-time FPS fans who like their levels complex and three-dimensional, Hell Hunt is a treat.

It’s still very early in development and doesn’t have a Steam page yet nor a publicly-available demo. Keep up with its progress by following the developer on Twitter. Let us know what you think in the comments section below.