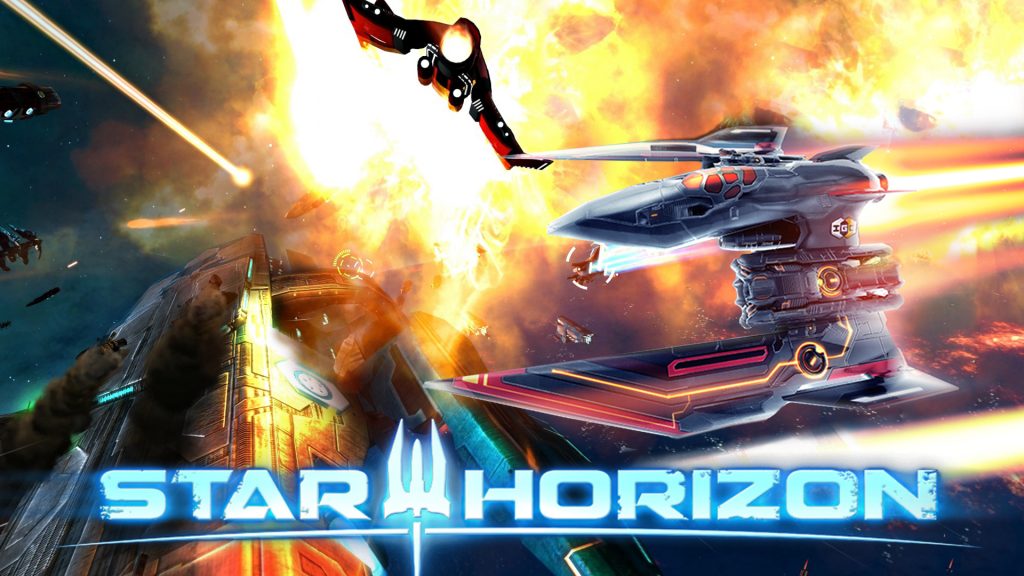 An on-rails space shooter in the vein of such classics as Silpheed and Star Fox, Star Horizon has made the jump from mobile devices and PC to the Nintendo Switch. The game puts players in control of John, a Federation pilot who’s accompanied by his ship’s smart-mouthed AI module, Ellie, who, after his mothership is destroyed in what appears to be a freak occurrence, wakes up from cryosleep years later and sets off to discover what happened.

Boasting ten stages of deep-space dogfights, an upgrade system, and what developer No Gravity Games describes as “a mature story of a man and his AI spiced up with absurd and dark humor,” the game certainly seems to have a lot going for it. But does Star Horizon live up to its promises? 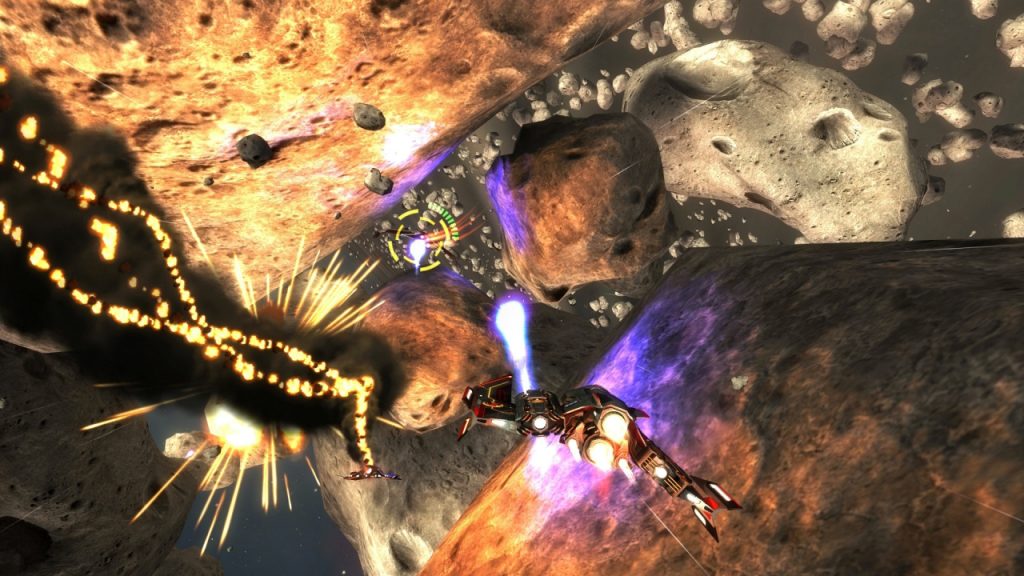 While it’s not the prettiest game on the Switch, some stages, like this battle in the heart of an asteroid belt, really impress.

While Star Horizon aims to tell a mature story, the results are amateurish at best. It’s the same tale of galactic federation versus scrappy rebels that we’ve seen play out time and time before. Surprisingly, it’s all fully voiced, and admittedly the banter between John and Ellie can be amusing sometimes. The same can’t be said for the rest of the cast though, who awkwardly deliver their lines, and even enthusiastically invite you in for repairs or tell you where to find the best steak in the galaxy after you bombard their ships with thousands of torpedoes.

Star Horizon also features a morality-based choice system in some dialog scenes. But the silly writing and stiff acting make it hard to take too seriously.

Still, I can forgive the Star Horizon’s hokey story. After all, this is a proper rail shooter we’re talking about here. And while a gripping narrative would be welcome, the important thing is how good the moment-to-moment action feels. And for the most part, it feels pretty darn good.

Controlling your ship feels very responsive as you fluidly cruise around the screen. Tapping the ZR  or ZL buttons will fire off a volley of laser fire, which is your primary means of disposing of enemy ships. Additionally, the B button will send forth a salvo of homing rockets similar to the lock-on attack from Panzer Dragoon Remake (read our review here), and the Y button will launch a more powerful yet unguided torpedo. As for defensive maneuvers, a tap of the bumpers will allow you to perform a barrel roll. Sadly, while it looks fairly cool, in practice, it’s rather useless. 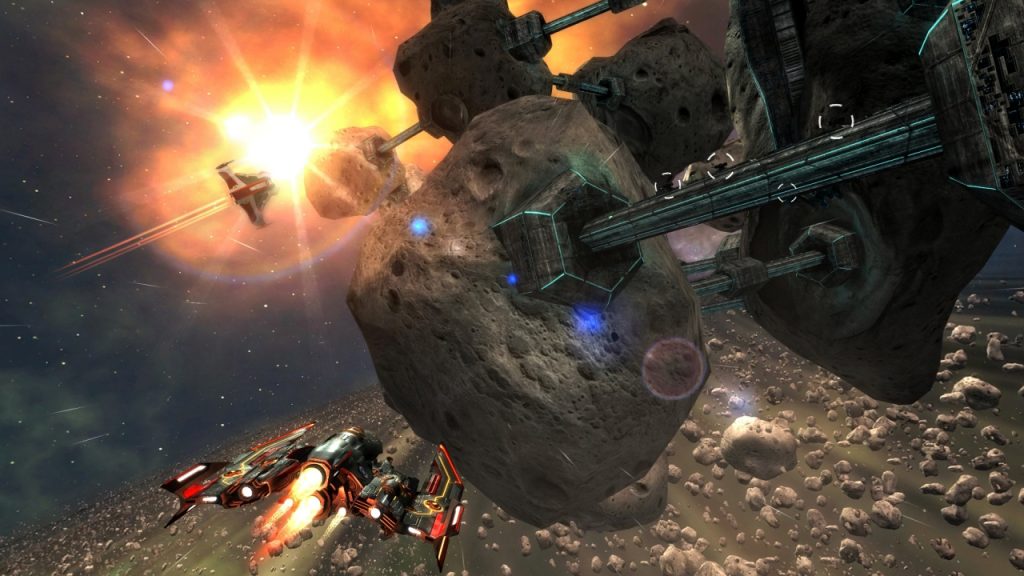 Like the homing shot in Panzer Dragoon, your ship’s swarm rockets can make short work of clusters of enemies.

As you progress through the game’s story, you’ll earn credits you can use to buy new ships and upgrade your torpedoes, rockets, and lasers. Typically, you can breeze through most of these stages without a problem – save for one which we’ll get to shortly – but occasionally, the difficulty will ramp up significantly. It’s when this happens that you’ll have no choice but to return to the stages you’ve previously completed to earn more credits to upgrade your ship enough to overcome the next area.

In a more ambitious game, needing to grind a bit wouldn’t bother me too much. However, the way Star Horizon handles it comes across more like an attempt to pad the experience more than anything else. Many of the stages drag on for quite a while and feature extended periods of dramatic camera sweeps while you wait for the next swarm of ships to appear. When it comes to building up tension and atmosphere, this is fine and well. But these long, empty periods can be tedious when you just want to grind for credits so that you can survive a tricky boss fight.

Then again, given the game was originally a mobile title, this isn’t particularly surprising. I can’t help but think Star Horizon would be off as a straightforward shooter without any of the added fluff that breaks the flow of the game. 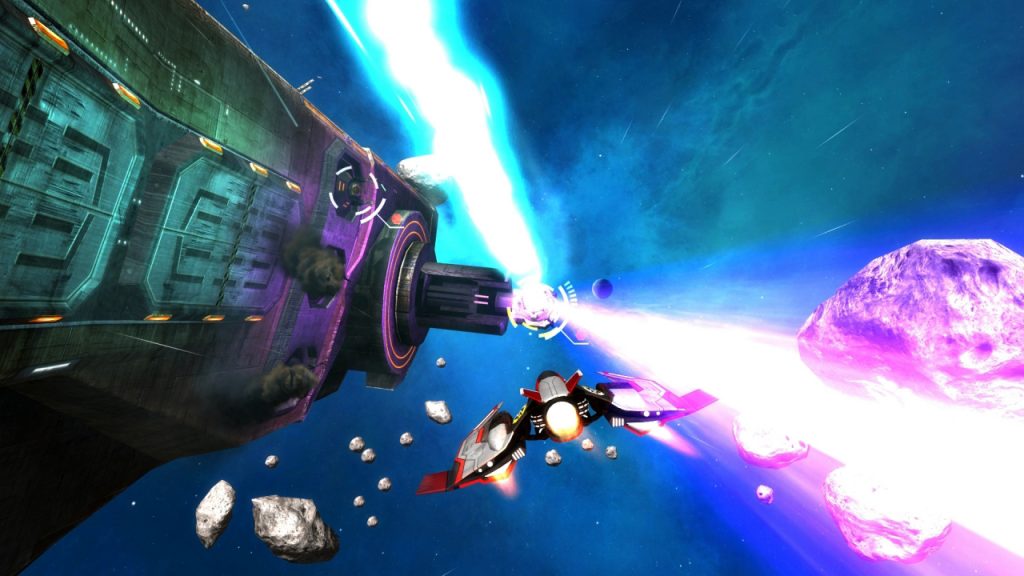 Like any good rail shooter, Star Horizon’s boss fights are some of the game’s most satisfying moments.

Despite its underwhelming story and the occasional need to grind, Star Horizon’s space-based shootouts can be quite enjoyable. The game’s standout moments include a spectacular battle that takes place in the heart of a stunning emerald asteroid field. There are also several bosses that you have to destroy piece by piece, and they’re a lot of fun while they last and make it easier to overlook some of the game’s other shortcomings. Well, save for the elephant in the room: the game is currently unbeatable.

The game’s seventh stage tasks you with destroying six signal disrupters in an asteroid belt. Clocking in at nearly ten minutes long, the stage unfolds like the world’s flashiest computer screensaver as your nimble craft careens through a dense field of debris. However, no enemies, save for two small clusters of gun emplacements, appear. After replaying the stage two dozen times and destroying everything that crossed my path, none of the kills counted towards my quota even when my pilot was screaming triumphantly as my targets exploded into smithereens.

Now, having spent more than two hours fruitlessly attempting to progress through the game’s story, I’ve decided those signals can just remain disrupted. When it comes to pre-release builds, issues like this happen, and we often overlook them as we await patches. However, Star Horizon is now readily available for you to spend your hard-earned cash on. With that in mind, this kind of oversight is just unacceptable.

As someone who tends to get a lot of enjoyment out of rail shooters, Star Horizon is a game I had high hopes for. And while I feel some features, like the storytelling and upgrade system, fall a bit flat, the core shooter experience can be pretty fun in short bursts. Sadly, in its current state, it’s impossible to recommend a game that is, as far as this reviewer can tell, entirely unbeatable at this time due to a game-breaking glitch.

If you’re dying for a new rail shooter in your Switch library, Star Horizon could very well fill that plasma cannon-shaped hole in your heart. But you better wait for a patch before setting your coordinates for the eShop.

Save The Games. Save The World. Now before we start, I want to say that I hardcore rep the Nepu Nepu cult. I love the Neptunia series and all…