First released on PC last year, Ion Fury is an unapologetically retro first-person shooter. Powered by the same engine responsible for such genre classics as Duke Nukem 3D, Blood (read our review of Blood: Fresh Supply here), and Shadow Warrior, it’s a game about kicking ass, chewing bubblegum (if you happen to have some), and murdering hordes of enemies in a bloody fashion with a wild arsenal of weapons.

Now, developer Voidpoint and 3D Realms’ bullet-riddled love letter to the shooters of old is available on consoles. Unfortunately, while the game still manages to deliver the gory gameplay of its PC predecessor, the Xbox One version suffers from more performance-related issues than the entire Russian Olympic team.

State Of The Art Bang Bang 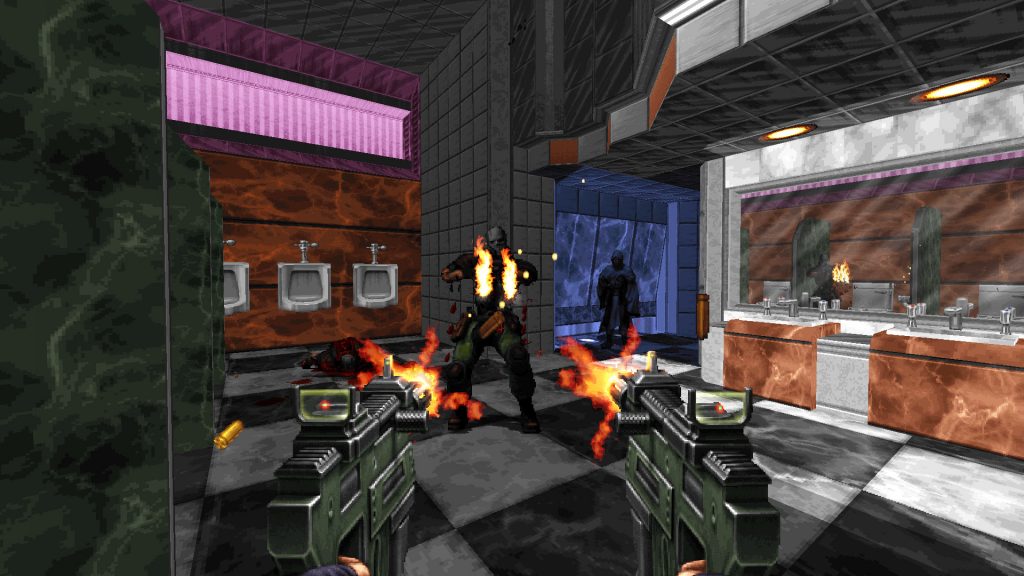 Ion Fury puts players in the combat boots of Global Defense Force operative Shelly “Bombshell” Harrison. A gun-toting beauty as adept at killing as she is at spewing cheesy one-liners, Harrison has been tasked with taking down the mad scientist Dr. Jadus Heskel and his cult of bloodthirsty cyborgs. To do so, she’ll need to blast her way through nearly 30 levels split between 7 chapters that take you from the heart of a robot-infested  DC to the villain’s underground lair.

Without a doubt, the game’s plot is paper-thin. But about as much as you’d expect from the games Ion Fury takes its inspiration from. Shakespeare, it is not, but it’s a perfectly fine excuse to hit the streets of a cyberpunk DC and pump transhumanist soldiers full of lead, and that’s good enough for me.

As you make your way through the game’s neon-lit city streets and sprawling military installations, you’ll collect a wide variety of weapons with which to massacre your enemies. You’ll start the game with nothing but your trusty revolver. However, before long, you’ll get your hands on some more impressive firepower, like SMGs that engulf cultists in flames with incendiary rounds, and heat-seeking bowling balls that can reduce all they touch to heaps of twitching gristle.

Admittedly, these weapons are all relatively tame compared to other BUILD engine shooters. But they’re all satisfying to use and versatile enough to present you with plenty of options for how to handle each encounter. Out of all the weapons in Ion Fury, I found myself using the shotgun the most thanks to its considerable stopping power and alternate firing mode that lobs pipebombs – perfect for bouncing off walls and into the faces of enemies cowering around corners.

All in all, they get the job done. But Ion Fury’s guns are a far cry from the weapons found in other BUILD shooters, like Blood’s voodoo doll that could reduce ghouls to dust or Duke Nukem’s hilarious microwave expander that caused aliens to make like a Ballpark Frank and plump when you cooked ’em. 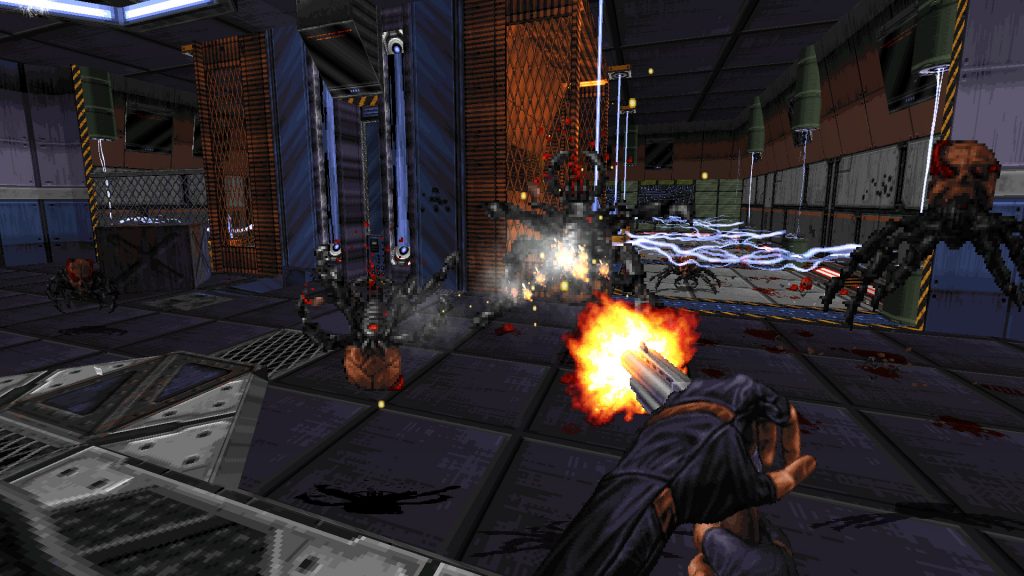 Bombshell’s revolver comes in clutch with its mix of power and accuracy.

With its kick-ass protagonist and undeniable sense of old school cool, running amok through a dystopian D.C. in Ion Fury can be great fun. The problem is that it never takes long before some glaring technical issues pop up like the game’s meat-and-metal monstrosities to ruin your good time.

Despite the console PS4 and Xbox One version of the game proudly boasting 4K visuals at 60fps, Ion Fury’s framerate chugs. And believe me, it gets baaaad.

Rooms with lots of machinery such as spinning turbines can cause the action to rubberband from blazing fast to something more akin to trudging through water at the drop of a hat. As you’d expect, this can be incredibly disorienting – especially during frantic firefights. And when it comes to boss fights, forget about using any kind of strategy. One battle in particular against a massive warmech during the second episode’s finale devolved into a virtual slideshow as I desperately strafed back and forth unloading my weapons, praying for the fight to end before my obviously quite distressed Xbox One spontaneously combusted.

As bad as the framerate screeching to a grinding halt is, I’d take it over Ion Fury’s game-breaking crashes any day of the week. During my review playthrough, falling to my death from a building would always result in the game crashing to my console dashboard. Another chaotic scene in Episode 1, Act 5, caused this to happen no less than ten times. Yes, you read that right. TEN. 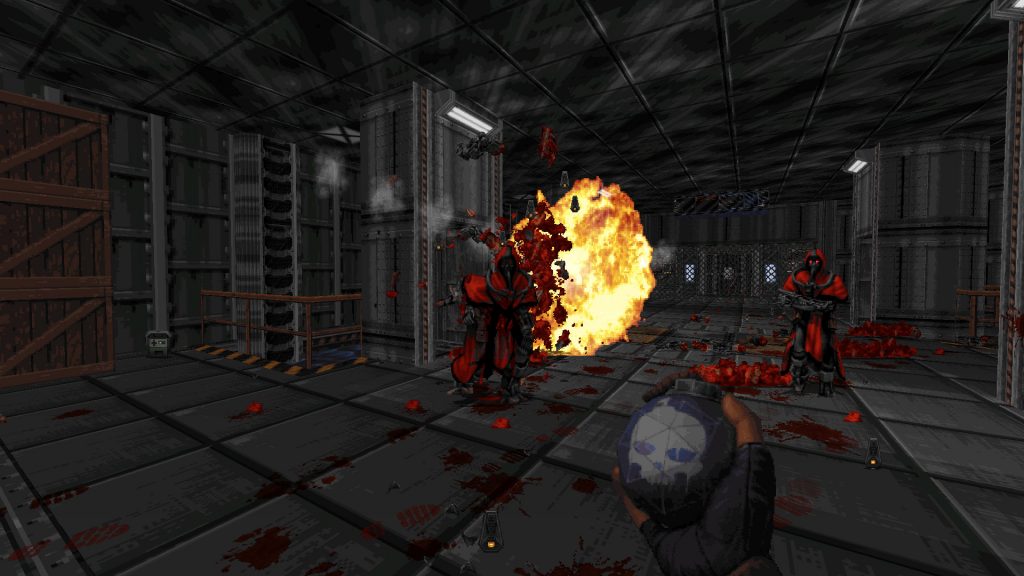 Poor optimization makes swapping weapons while battling hordes of cultists about as fun as being waterboarded.

Keep in mind that Ion Fury is a game running on a nearly 25-year-old engine. The fact that it runs worse on my shiny Xbox One X than similar BUILD engine titles performed on my (now) ancient 333mhz Celeron PC did back in 1998 is almost unbelievable. But as aggravating as these problems are, they aren’t the only issues holding the game back.

When dealing with large groups of enemies, the dual SMGs are an absolute lifesaver. At least, they should be. The problem is I found myself hesitant to use them because doing so would frequently result in a weird glitch where my character would quickly turn 180 degrees without warning, leaving me vulnerable to punishment as I fumbled to regain my bearings.

Speaking of fumbling, the console version of Ion Fury also lacks any kind of weapon wheel. To change weapons, you’ll need to scroll up and down slowly using the d-pad. Of course, this means you’ll need to take your finger off of the left stick, which turns you into a sitting target. Now, Ion Fury is a lightning-fast FPS that throws mountains of enemies at you quite often, and stopping is tantamount to suicide. In an act of carpal tunnel-inducing misery, I found myself having to stretch my right thumb across the controller to the d-pad so I could select whatever weapon I needed while continuing to move.

If you’re a total masochist, you may love Ion Fury’s lack of optimization. However, as someone who quite values both my wrists and my sanity, I found these shortcomings exceptionally hard to overlook.

As someone with a lot of nostalgia for the BUILD era of PC first-person shooters, I had high hopes for Ion fury on Xbox One. Sadly, this port’s abundance of glitches, bizarre performance problems, and a lack of optimization for consoles make it too frustrating to recommend. Perhaps with the magic of post-release patching, the worst of these kinks will be ironed out. However, at the time of this writing, today is not that day.

If you’ve got a soft spot for 3D Realms’ classic FPSs, you’d be better off dodging this bullet and picking up Ion Fury on Steam instead. Trust me, you’ll be happy you did.