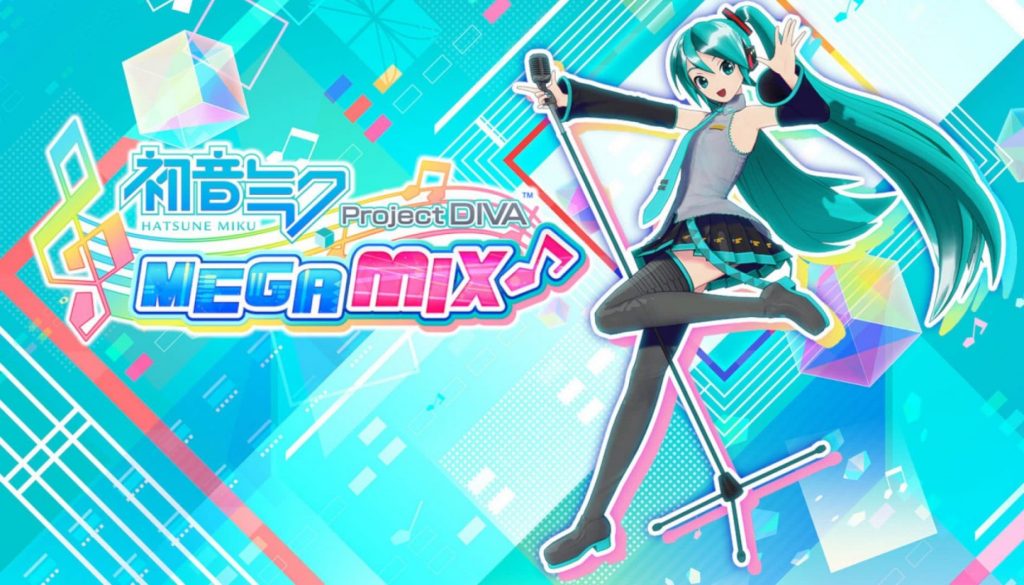 Rating rhythm games is hard. I mean, to be fair, rating games isn’t the easiest thing in general. But I’ve always felt as though it was especially difficult to rate rhythm games. What makes a rhythm game worthy of a perfect score? What makes it worthy of an abysmally low score? Mechanics aside, music is such a subjective and transcendent thing that I don’t think that we can ever indeed find a “correct” way of prescribing some kind of arbitrary number to a game that places its focus on music. So, what can we do? Well… I don’t know. Our best, I guess? Of course, that means something different to everyone. To me, it means rating a rhythm game explicitly based on the merit of its specified genre; and that’s why I think Hatsune Miku: Project DIVA Mega Mix is worthy of a 5 out of 5 rating.

As far as rhythm games based around Vocaloids go, there isn’t anything that I can think of that Mega Mix lacks. It’s got a whopping 101 songs (all of which, in my opinion, are good), four different difficulties, a special, second mode explicitly made for the Switch, and a level of character customization that rivals that of the Persona Dancing series. It’s a great game. A really great game. And, if you’re into this kind of thing, I’m pretty darn confident that you’ll end up agreeing with me by the time you’re done reading this review.

Aiming for the Top 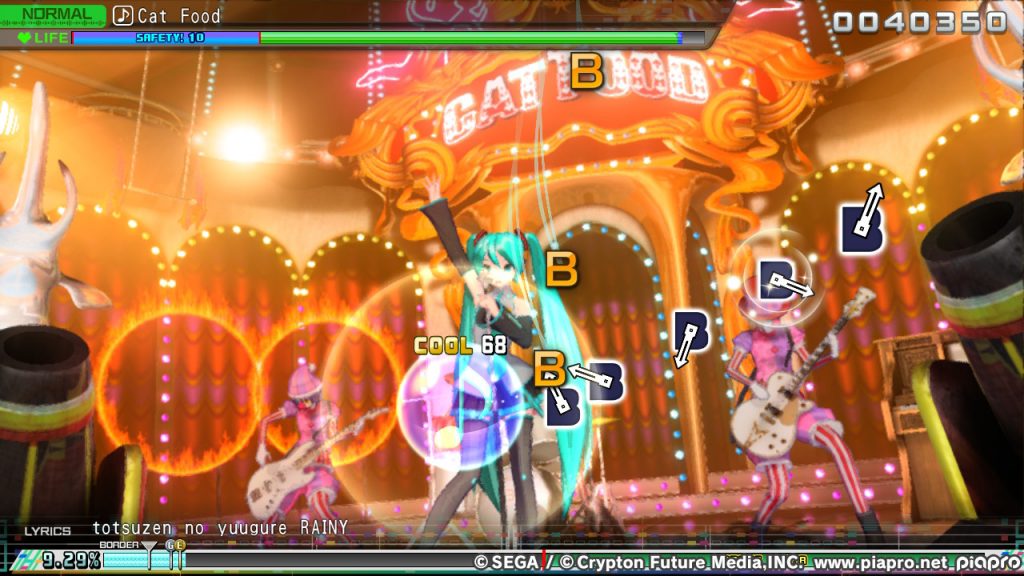 Literally, the only negative thing that I can think of to say about this game is that the graphics aren’t the best in handheld mode. …But, like, who even cares in this situation?

As much as I love Mega Mix, I’ll also say that I’ve never liked talking about gameplay mechanics when it comes to rhythm games. After all, saying something along the lines of “buttons appear on-screen, and you press them in time to the music” literally describes almost the entirety of the gameplay. Or at least the “standard” part of it (more on that later). But, given how much I’ve already been singing this game’s praises, I should probably put a little more effort into it than that. So, to that end, let’s take a look at how this game handles the concept of difficulty.

Difficulty in rhythm games has, in my opinion, always been a fickle mistress. One minute you’ll be playing on Normal, totally killing it, and the next, you’re sitting there with your mouth agape after abysmally failing that jump to hard mode. Mega Mix fits into that trope, too. I won’t pretend that it doesn’t. But it provides players with something that many other rhythm games don’t; a practice mode. Speaking from personal experience, I’ve typically found that my problems arise not with entire songs, but specific parts of songs within harder difficulty levels. Because of that, I’ve always wanted to be able to practice specific parts. And, lo and behold, Mega Mix actually gives that to players. By switching to practice mode, Mega Mix lets you begin a song wherever you’d like and allows for easy resetting—a literal rhythm game dream-come-true. 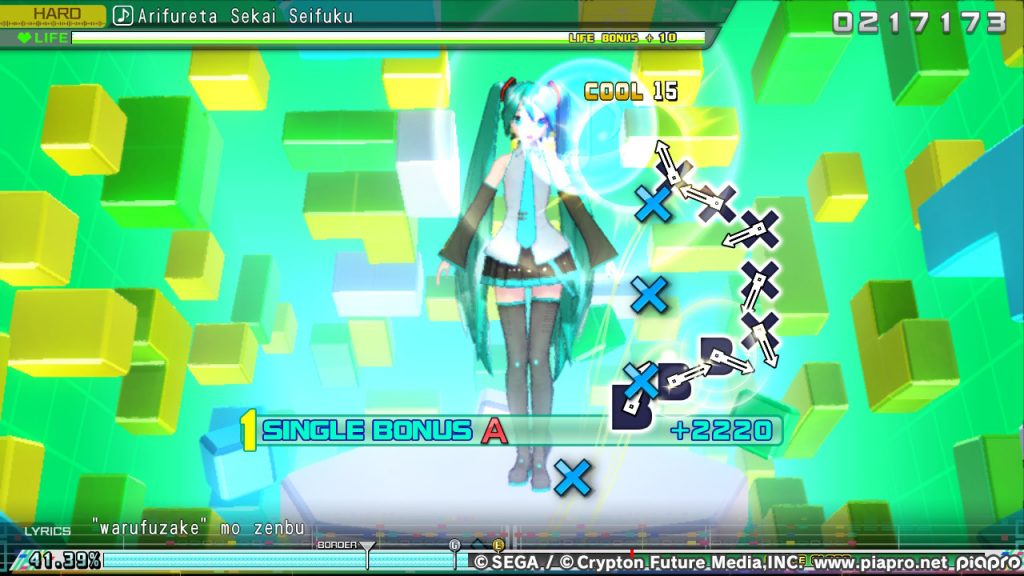 Making the jump from hitting buttons with one hand to two is tricky, but it absolutely pays off!

Yet another unique thing about Mega Mix is that there are multiple ways to play it. Because the game only has inputs for A, B, X, Y, Left, and Right, you can technically play it with one hand—or by dedicating one hand to the buttons, and the other to the Left and Right inputs. However, Mega Mix, like every other rhythm game, isn’t just about succeeding—it’s about succeeding with the best score. While hitting notes and maintaining combos is at the crux of high scores in Mega Mix, players can also score major points by holding down certain buttons when prompted. But it can get pretty tricky doing something like holding down B and X at the same time while hitting the other two buttons. The solution? To become ambidextrous, of course! Of course, in most cases, this is entirely optional. However, the fact that Mega Mix essentially forces players to develop their multi-tasking abilities to truly master the game gives it a somewhat devious yet undeniable charm. 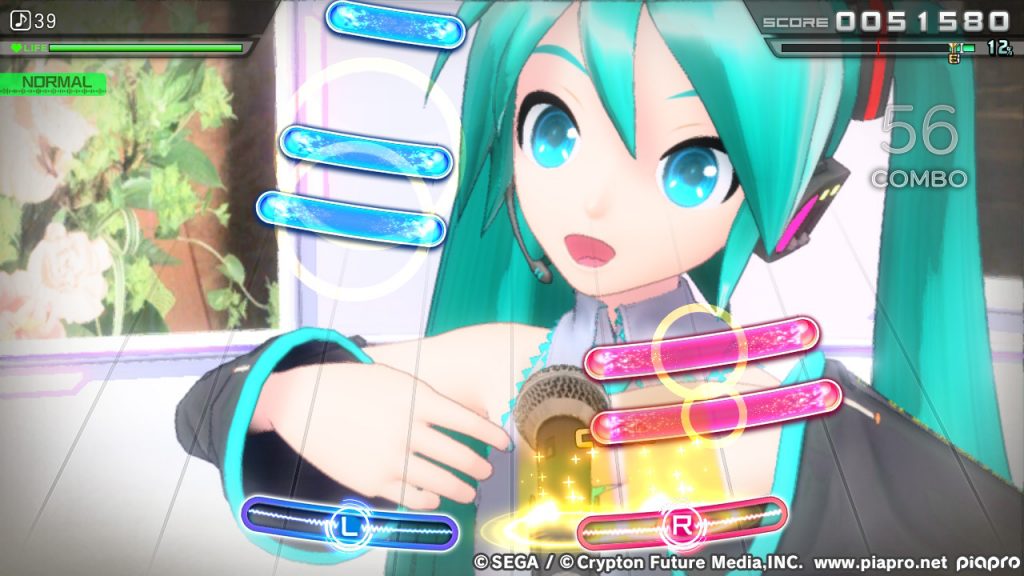 Mix Mode is, admittedly, much more gimmicky than its Arcade Mode counterpart, but I’m not complaining about it doubling the amount of content that this game gave me.

Phew, we’ve already covered a lot, huh? Well, what if I told you that everything that I’ve gone through so far technically only constitutes half of the entirety of Mega Mix? Well, it’s true! While many (including myself) will find themselves immediately flocking to the game’s Arcade Mode (which is the standard rhythm game), Mega Mix also has what is known as Mix Mode. An all-new mode exclusive to the Switch, Mix Mode has players forego the typical button presses in favor of using the Joycons to line up their markers with incoming notes and hit them in time with the music. It’s not a stretch to call Mix Mode gimmicky, because it absolutely is. It essentially turns Mega Mix into a strange, rhythm-based hybrid that feels like one part Brick Breaker and one part Taiko: Drum Master (except you won’t be swinging anything). It’s strange, and it definitely takes some getting used to, but who am I to complain about this game experimenting with new things when it already has the basics down pat? 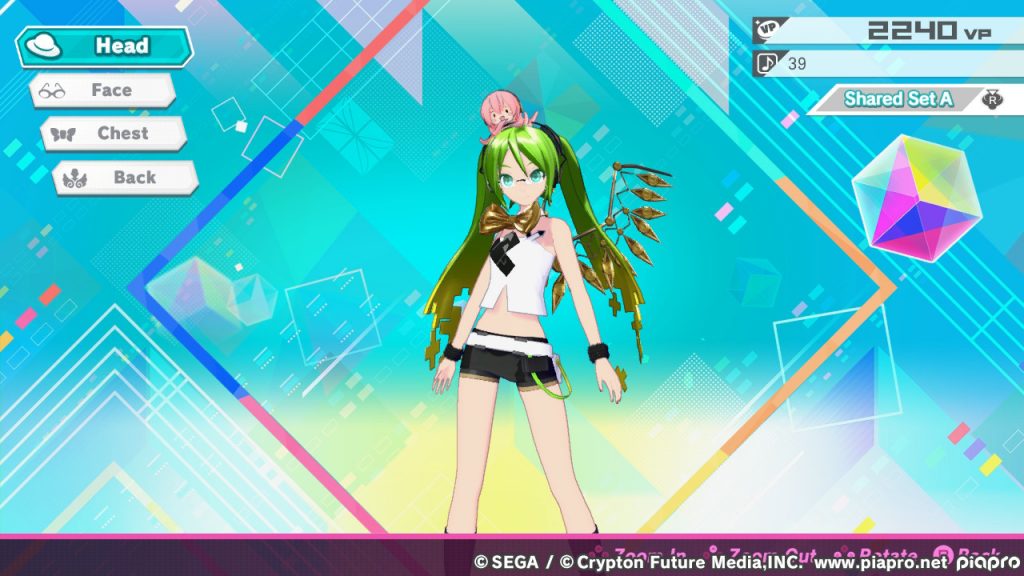 Can you really call an outfit fashionable if it doesn’t include a pink octopus-girl-monster as a headpiece?

The fact that Mega Mix features a collection of 101 songs that spans 10 years and a variety of different phenomenal songwriters is more than enough to make me happy. A lot of other people, too, I’m sure. But I can’t speak for the entirety—or even the majority—of this game’s audience, an audience which SEGA knows very well at this point. And that’s exactly why they’ve added in the ability to let players customize Miku & pals. I’ll admit that, even as someone who doesn’t find themselves scrutinizing character appearances in games like these, the sheer number of things with which to play dress-up is very impressive. From the literal hundreds of outfits which span across a variety of styles, to the cool, cute, and sometimes just plain goofy accessories, Mega Mix doesn’t really leave a lot to be desired in terms of outfitting (although the fact they’ve already confirmed DLC for this game might render that point moot).

I’m still not sure that you can ever really call a rhythm game “perfect,” but Hatsune Miku: Project DIVA Mega Mix is as closest to perfection as I’ve ever seen a rhythm game get. As much as I’m aware that Vocaloid music isn’t for everyone, I honestly can’t help but recommend that anyone into rhythm games do themselves a favor and at least give this game a chance. You’ll only be hurting yourself in the long run if you don’t!