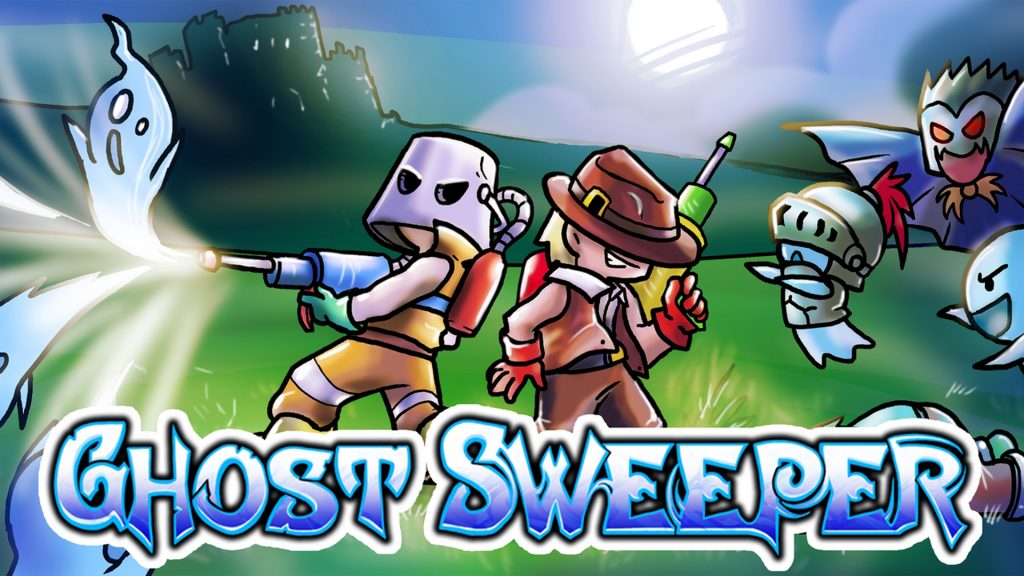 Taking its inspiration from Tecmo’s Solomon’s Key, 7 Raven Studios’ Ghost Sweeper is a puzzle platformer with a familiar premise. Centuries after being defeated, the evil Dark Lord has been resurrected, and his armies of ghouls now roam the land preying on humanity. To combat the Dark Lord’s evil forces, players choose from one of two ghost-busting heroes and embark on a mission to rid creepy castles, haunted villages, and other spooky locales of phantoms – and collect mountains of treasure while they’re at it!

While the game is a bit rough around the edges in spots, Ghost Sweeper’s clever puzzles and satisfying arcade-style gameplay make for a game that’s easy to pick up and hard to stop playing.

Who Ya Gonna Call? 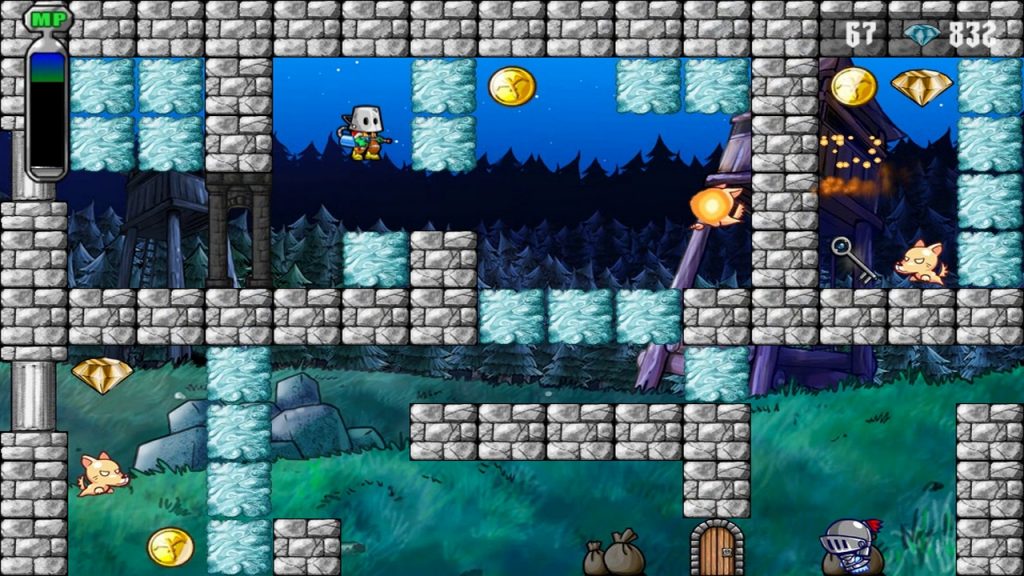 Beating a stage awards you with stars that you can spend to gain access to even more challenging bonus areas.

Much like the aforementioned Solomon’s Key, the goal of each stage is to make your way through a maze to find the hidden key and take it to the exit to proceed to the next area. Of course, accomplishing this task is easier said than done.  Each stage is teeming with ghosts, fire-breathing hellhounds, and other things that go bump in the night that would like nothing more than to have you over for dinner.

Thankfully, you’ve got a few ways of protecting yourself from the legions of undead and other beasties that patrol each stage. Your primary means of defense and method of getting around each map is the ability to generate blocks. These blocks can be used as platforms to help you reach new areas or to trap enemies. The trick to progressing through the game’s eight worlds is to learn the behaviors of each monster type. For example, zombies will attempt to climb to reach you. However, if you such up a block with your vacuum while they’re on top of it, the fall will knock them out temporarily. Do this to a skeleton, and they’ll shatter completely.

In addition to being able to stack and suck up blocks, each of the game’s two playable “Ghost Sweepers” has a unique power. The bucket-headed protagonist can suck up certain enemies and then launch them across the map like supernatural projectiles that destroy everything in their path. The gunslinger, on the other hand, can simply pepper baddies with less-powerful gunfire. These skills undoubtedly come in handy, but you’ll need to use them sparingly as they burn through your limited supply of MP, and refills are scarce.

Oh, Jeepers Creepers, Where’d Ya Get Those Sweepers? 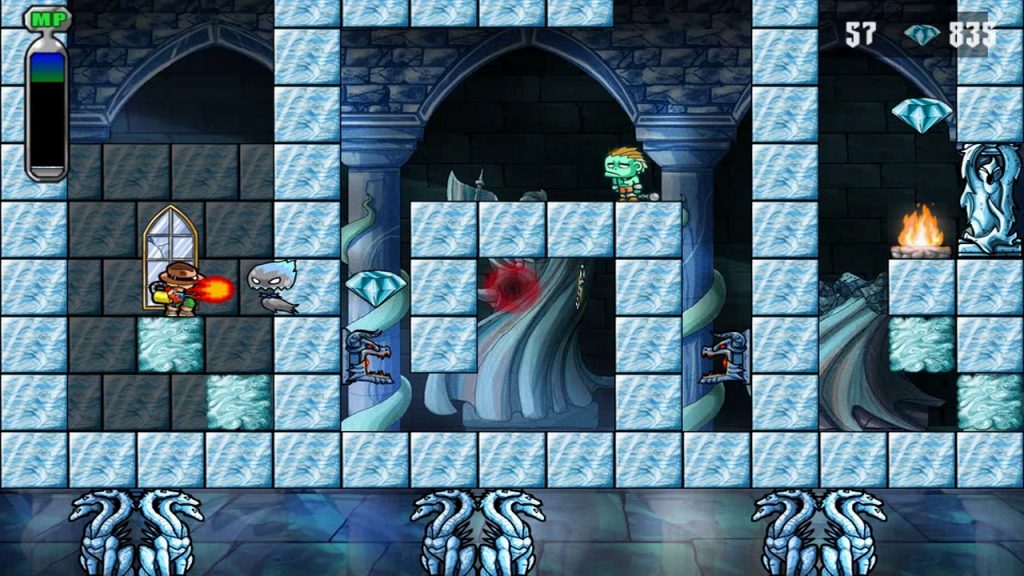 The gunslinger can fire volleys of hot lead to stop ghouls in their tracks, but be sure not to burn through your MP supply!

Like any good puzzle-platformer, Ghost Sweeper’s stages are somewhat simple at first but become much more diabolical as you progress through the game. At first, you’ll simply have to worry about the enemies on each stage. However, later areas ratchet the difficulty up considerably by introducing plenty of deadly traps, fire-breathing turrets, and other hazards to avoid. Some mazes will even force you to keep lighting torches to beat back the darkness, all while dodging enemies and projectiles that can snuff your poor Sweeper’s life out in one hit.

For the most part, this is all good stuff. Despite its cutesy visuals, Ghost Sweeper provides a satisfying challenge thanks to its diabolical stage designs and various enemy types that require their strategies to overcome. But that’s not to say the game without its quirks. For starters, sometimes it feels like there’s a noticeable delay when trying to shoot enemies or create blocks. This can be pretty frustrating and result in what feels like unnecessary deaths as you mash buttons to no avail. Jumping over enemies could also be a bit improved. Simply put, your character hops with all of the grace of a refrigerator being lobbed onto a trampoline.

Still, with practice, you do eventually get used to Ghost Sweeper’s somewhat slippery controls. 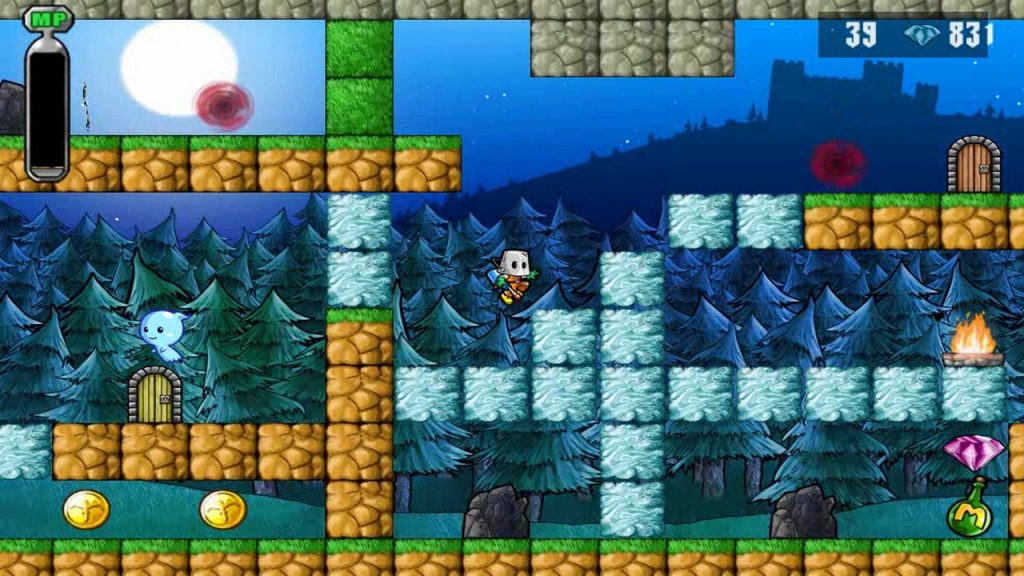 Don’t be a blockhead – grab that gold and get gone!

When it comes to its presentation, I have to admit I’m not entirely enamored with Ghost Sweeper’s Flash-like aesthetic and uninspired monster designs. That’s not to say they look bad, mind you, there’s just nothing memorable about them. For what its worth, the game is certainly colorful, and each of its eight worlds looks unique, which keeps the action from becoming stale.

Unfortunately, it’s hard to say the same for Ghost Sweeper’s musical arrangements. All of the game’s music comes from different pieces of appropriately spooky classical music. The problem is that there’s only one track per area, and they loop continuously. With each world featuring eight stages – many of which will require quite a few tries to fully master – don’t be surprised if Ghost Sweeper has you ready to mute your sound system to stop the aural abuse. For what it’s worth, at least it’s not as painful to listen to as Dark Castle on the Sega Genesis, so there’s that.

While not quite as good as the Taito’s recently released Bubble Bobble 4 Friends, Ghost Sweeper is a fun little puzzle-platformer that’s well worth the modest $5 asking price. If you’re a fan of Solomon’s Key or merely looking for a fresh dose of arcade-inspired action, you can’t go wrong adding this game to your collection.