This ain’t no joke. 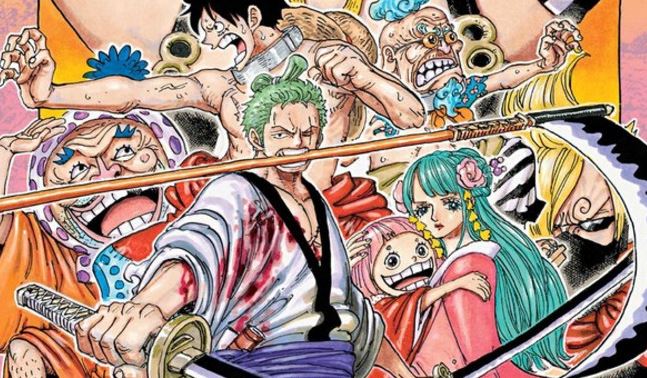 Another month, another fantastic One Piece volume. Since its 2018 initiation, many fans uphold the ongoing Wano arc as the series’ true return to form since beginning the New World, and it’s not because of its stunning emotional developments, tantalizing hints, or off-the-wall silliness; nay, it’s because for the first time since Punk Hazard, we’ve had the entire Straw Hat crew operating on the same island together. No more replenished crews with a select few driving off Emperors or laying the prepwork for the next arc — everyone from Luffy to Brook is here, and they’re making things happen, and their accumulative efforts bounce back and push the story forward. All of this is orchestrated to the beat of creator Eiichiro Oda’s taiko drum, whose passion for Japanese period dramas bleeds into every page with shamisen sound effects (“be-beng!“) to ukiyo-e clouds.

None of this weighs even a breadcrumb against our suspension of disbelief — long since have we accepted anything can happen within One Piece‘s legendary Grand Line and its breadth of cultures, and if Wano’s population and weather phenomena must resemble that of Edo-period art, than we must accept no less if only to satisfy Oda’s own infatuations. (And even if we were to dread the usual suspect of said suspension of disbelief — that being the rare character death — let’s just say you’ll have your jaw drop by the volume’s end.) If nothing else, Wano’s consistent quality — as opposed to Dressrosa’s uneven highs and lows and the protracted mess that was Whole Cake — renders his eager indulgence well-deserved. From its familiar penchant for subversive visual gags (In case you still haven’t gotten the joke behind Raizo’s design, just observe the scene where he’s talking with Kawamatsu and let the gears click from there), to the crew wrestling with newfound drama, the Japanese eye candy accompanying all is a fresh coat of paint upon old-school One Piece.

Not that every crew member gets something to do in Volume 93 — Usopp and Franky may as well be background characters — but their organic roles and contributions means we won’t miss them for long. (Why, if you pay attention, a certain crew member’s cure-all already foreshadows heartbreak…) As expected, Zoro steals the show in his quest to steal back Wano’s treasure in Shusui, with his vagabond journey encountering the likes of bridge guards, deadly assassins, and a pair of familiar fugitives finding themselves underneath his care. The character’s hardened temperament loyally yielding to Samaritan instincts has always been his most endearing trait, right to down  appreciating Wano’s down-on-its-luck optimism and finding himself with something of a makeshift family overnight. (Alas, while Sanji and Pudding were a special circumstance, Oda’s strict “No romance” rule immediately snuffs out any hopeful sparks between Zoro and a certain oiran. Shame!)

I just noticed they finally changed the “New World” subtitle. 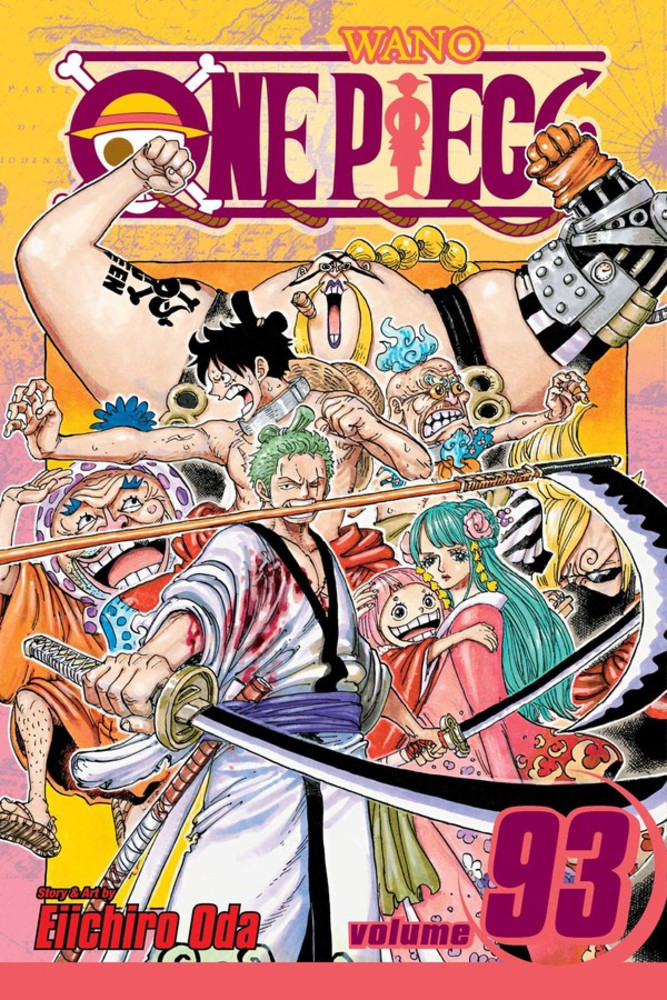 The breadth of cultures plays again into Luffy’s imprisonment within Udon, as old man Hyo — revealed as Hyogoro the Flower, a famed ex-yakuza boss, exploits their execution via sumo match to train him in the ways of “Ryuo”: Wano’s version of Haki. In the past, One Piece has been averse to the concept of training arcs — characters often came into groundbreaking abilities (Luffy’s Gears) or tapped into Haki (Zoro’s duel against Mr. 1) onto their own, with their one and only training session skipped over for the two-year timeskips. Perhaps Oda previously dreaded the oft-criticized slow-crawl stigmatizing such developments, and as it’d be something of a cop-out to suddenly bridge the gap between him and Kaido (No “I just thought up Gear 2nd and Gear 3rd on the train” here!), he has no choice but to imbue Luffy’s life-or-death ordeal into One Piece‘s jumpy pacing. There’s no deliberate crawl screeching the story a halt, no retreat into boring, isolated training rooms — just Luffy pounding away in feeble efforts to master Ryuo as Oda takes care in bolstering his progress with potential rebellions, dubious allegiances, and local enigmas. (Just who is that poison-feeding glutton locked away in the cell?) With this training arc set to culminate in the next volume, it’s a wonder how Oda effortlessly flexes it into his storytelling.

Hence why the the gut-punch of the volume’s last two pages hits as hard as it does — Tonoyasu’s indiscriminate altruism’s kept directly in the forefront during this volume’s latter half as Luffy undergoes his workout regimen, and we’re left as rapt as the entire country of Wano for his sudden exit. What ensues is the perfect cliffhanger in Oda’s bold resort: rare is the character death in One Piece, and rarer still is such an occurrence at an arc’s midpoint (if not entirely unprecedented) that this subversion leaves us vulnerable to One Piece‘s signature emotional gut-punch. ? The unusual jolliness of the poverty-stricken Ebisu Town was too prominent not to raise questions, yet I ponder how many One Piece theorists expected Toki’s tear-stained reveal to finally unveil the curtain obscuring the previous thirty volumes’ villainous economy– all feeding into One Piece‘s most gripping form of tragedy in irreversible, soul-destroying cruelty.

With this turning point setting the stage for Act 2’s conclusion, Wano confidently continues setting the stage for the ultimate showdown with Kaido and Orochi. For readers caught up with the Weekly Shonen Jump serial, it’s a refreshing (if not sobering) review on a spectacular arc — not the least in recent reveals leaving us little choice but to eye more than one character’s dialogue with suspicion — and for volume-only readers, it’s a suspenseful work of manga that’ll leave you hungry for the next installment. Rousing, multi-layered, and heart-wrenching all in one, boy’s adventure manga doesn’t get better than this.