Ride Into The Danger Zone 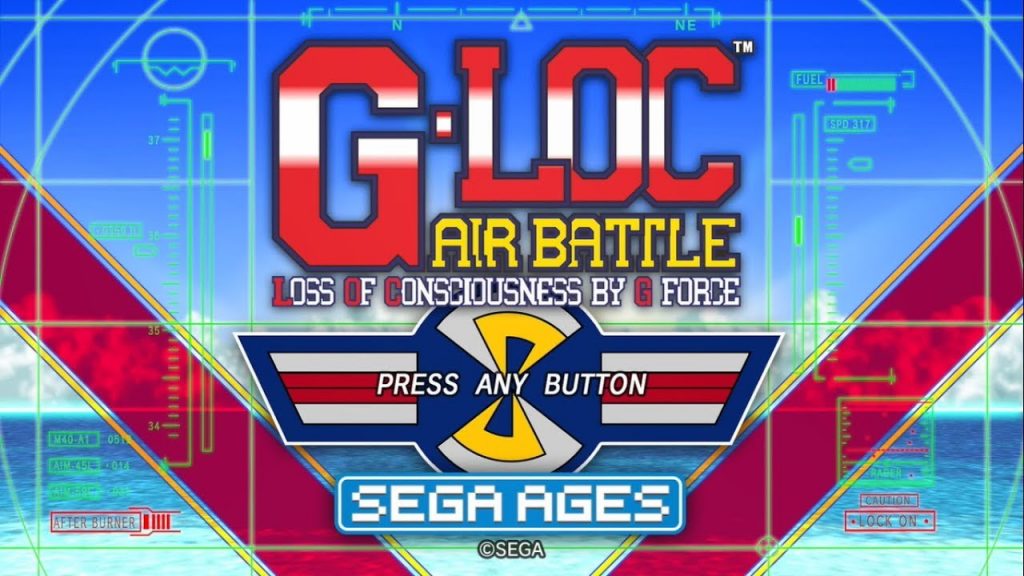 SEGA AGES G-LOC: Air Battle is the latest offering in SEGA and M2’s line of spruced up retro releases for the Switch. First released in the arcades in 1990, the game is a spin-off off Yu Suzuki’s wildly popular After Burner franchise that puts players in control of an experimental plane to take down waves of enemy fighters. However, unlike its predecessor, which featured a behind-the-plane perspective, G-LOC: Air Battle puts players directly in the cockpit of an agile jet as they race to wipe out a set number of targets before the time expires.

While the game received ports on the 16-bit Genesis, Game Gear, and several 8-bit computers, they failed to hold a candle to SEGA AM2’s Y Board-powered coin-op, which offered impressive sprite scaling and rotation effects far beyond the capabilities of the company’s home hardware at the time. Now, 30 years after the game’s original release, players can experience an official, pixel-perfect version of the arcade classic from the comfort of their homes with SEGA AGES G-LOC: Air Battle.

A Death-Defying Race Against The Clock 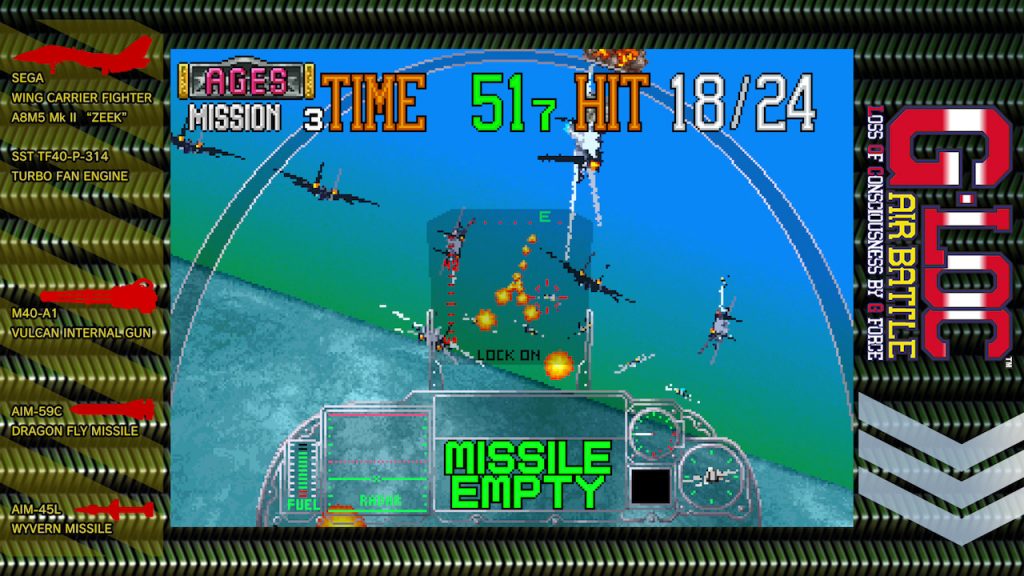 When in close range, the Vulcan cannon can completely shred anything that gets in your way.

As you’d expect from an arcade game, G-LOC: Air Battle’s premise is a simple one. Your objective is to take to the skies and destroy a set amount of targets in each stage to move to the next level. To do so, you’ll have a pair of weapons at your disposal to reduce your enemies to twisted metal. The Vulcan machine gun is great for chewing through enemies at close range, while an unlimited supply of heat-seeking missiles will allow you to dispatch bogeys from a distance. To do so, you’ll first need to line up the targeting reticle on your HUD so that you can get a missile lock before you can send your payload roaring up the tailpipe of your freedom-hating enemies.

The whole time you’re playing, the clock is rapidly ticking down. Clearing stages adds more time to the clock, much like cruising through the checkpoint in SEGA’s arcade racers like Daytona and Outrun. With that in mind, you’ll quickly discover how important it is to prioritize your targets and aim for large groups of jets rather than isolated stragglers so that you can promptly meet your kill quota and progress to the next area with the most time to spare.

This race to eliminate your targets is where G-LOC distinguishes itself from After Burner those most, where the goal is to simply make it to the end of each stage in one piece. The game forces you to steadily unload volley after volley of missiles on every jet, tank, or battleship on screen as quickly as you can if you want to make it to the next area. 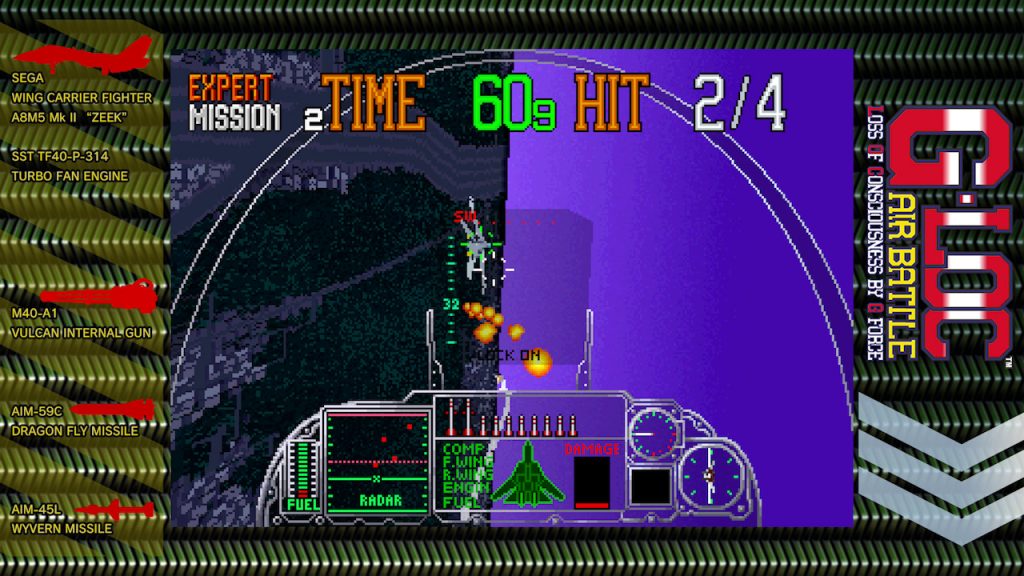 Arcade Mode is a pure port of the arcade experience. It features three difficulties to choose from, which not only offer a different selection of stages but also give you more freedom of how you control your craft. For example, in the game’s Beginner Mode, your speed is manually controlled, and your ability to roll your aircraft is restricted, leaving you free to focus solely on the offensive. However, the game’s Medium Mode gives you full control of your jet’s throttle so you can slow down to outmaneuver enemies dogging your six, or speed ahead to chase targets before the time runs out.

Lastly, the game’s Expert Mode offers 16 stages, making it almost twice as long as the game’s beginner mode. This mode pulls out all the stops, allowing you to barrel roll and even fly completely upside-down, which can make maneuvering through canyon stages a struggle as your craft zips around with all the grace of a squirrel on methamphetamine.

SEGA AGES Mode introduces a new, 16-stage route while upping your arsenal with a lightning-fast lock-on system. The tradeoff is there are now dozens of enemies on-screen at all times, and there are no continues. This mode is the star of the show and a real treat that fans of the original arcade release are sure to appreciate. 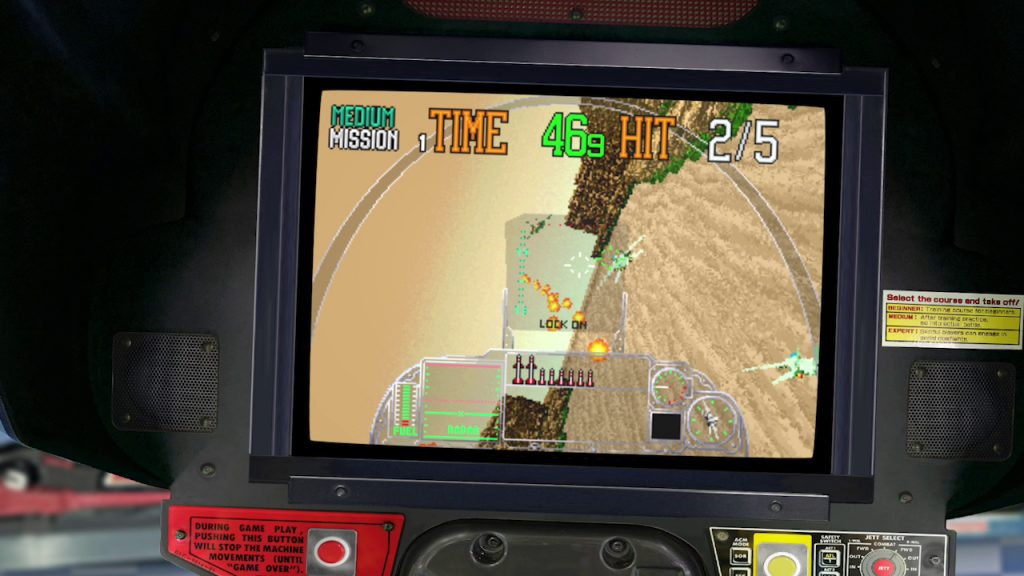 The moving display does a great job of recreating the arcade experience.

When it first appeared in arcades, G-LOC: Air Battle was hard to miss. Like afterburner, upright versions of the game existed. Still, many arcade operators instead sprung for the flashier sit-down version of the game, which featured a hydraulic cabinet that swayed and pitched along with the on-screen action. Sure, that may sound pretty tame by today’s standards. But in 1990, it was enough to make the game a real showpiece for any local arcade – and a completely out of this world experience for the handful of locations that managed to get their hands on the gut-churning R360 setup, which could spin a full 360 degrees.

SEGA AGES: G-LOC: Air Battle tries to replicate the experience of the sit-down version of the game with a moving cabinet display that borders the screen. It sounds a little hokey, but in practice, it works pretty well. I even found myself unintentionally tilting my head back and forth as I barrel rolled and strafed between incoming missiles and fighters at times. The only downside to this mode is that it reduces the play area considerably to fit the cabinet. G-LOC is a frantic, fast-paced game that can make the action reasonably hard to follow—especially when playing the game’s expert or SEGA AGES modes—and playing on a smaller screen can make it even more challenging to tell what’s going on.

Still, I love the novelty of the moving display and think it’s great fun, even if it’s not the ideal way to experience the game from across the room on your television.

Blink And You’ll Miss It

SEGA AGES G-LOC: Air Battle is a satisfying score-chaser while it lasts. But that leads my biggest issue with the game. Even with four different routes spread between the SEGA AGES and Arcade Modes, you’ll see everything the game has to offer in no time. You can burn through the Beginner Mode in less than five minutes. And the more challenging Expert and SEGA AGES modes don’t last much longer, with your average playthrough taking about 15 minutes to complete. After that, there isn’t much of a reason to come back for more.

Of course, brevity is par for the course when it comes to ports of classic coin-op titles. But even so, many other games in the SEGA AGES lineup will keep you busy for considerably longer than this release. Still, if the game’s brief runtime and relative lack of replayability don’t bother you, SEGA AGES G-LOC: Air Battle is a great way to experience one of SEGA’s more overlooked gems from the glory days of arcade gaming.