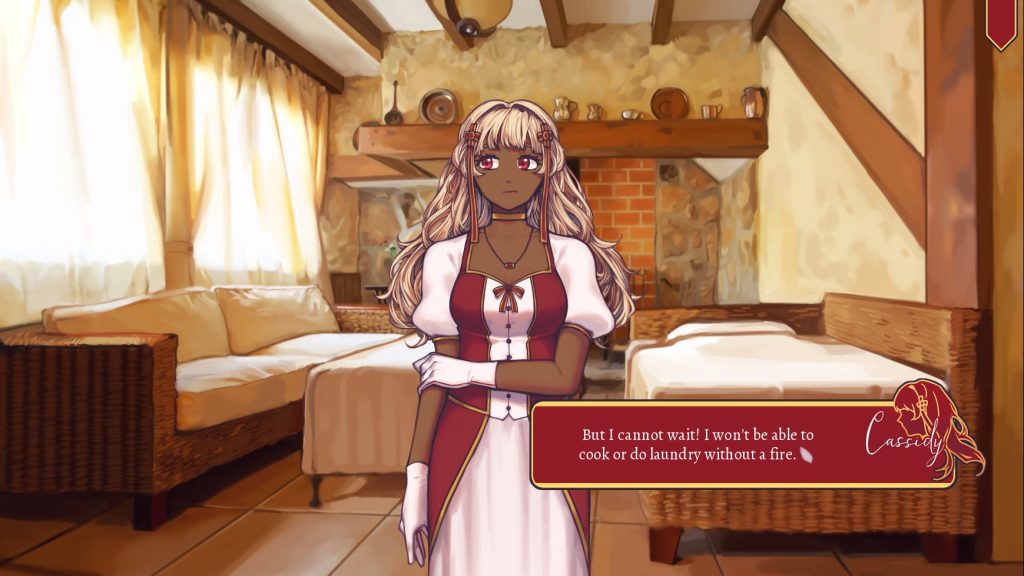 A (former) princess struggles to adapt to life in the wilderness.

I consider myself a fan of the yuri genre. (For the uninitiated, yuri refers to stories centered on lesbian romance.) That being said, it’s not as prolific of a genre as some others, especially when considering stories that have been translated into English. Still, there are a couple of developers on our side of the Pacific dutifully making yuri visual novels, one of the foremost of which is Heart of the Woods and Highway Blossoms developer Studio Élan. Studio Élan has a subsidiary publisher called Bellhouse, which partnered with developer L³ to release a small yuri visual novel called Without a Voice, created initially for a yuri game jam in 2016. 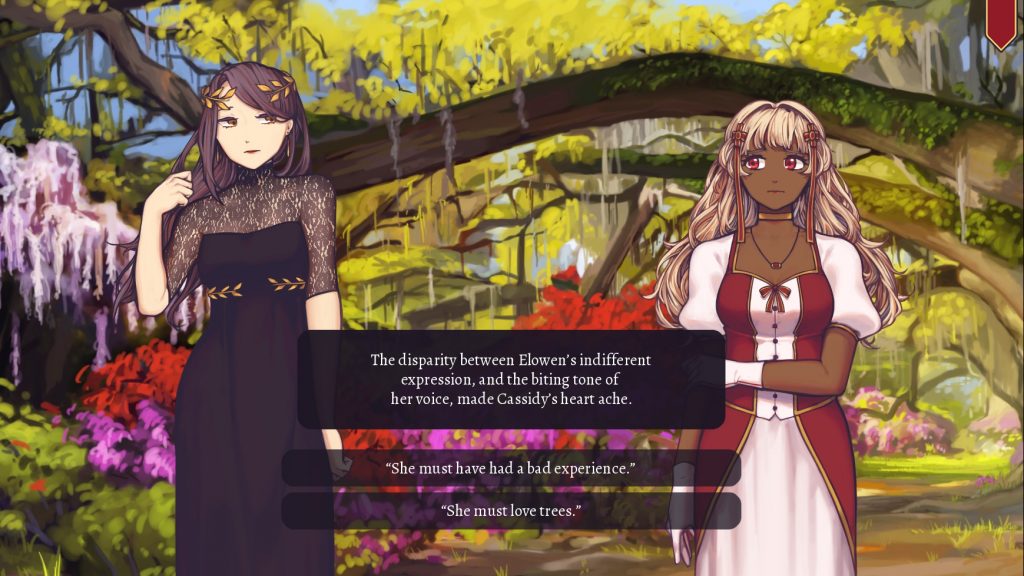 The choices all have an impact on which ending you see.

Without a Voice tells the story of a princess living in exile in the forest named Cassidy, who spends her days in solitude. One day, however, she meets a beautiful woman named Elowen. Cassidy finds herself falling for this mysterious resident of the forest, despite knowing nothing about her. Meanwhile, things around her start to gradually turn for the worse, over the course of the week that they spend together.

Given that it takes place over the course of just a week, Without a Voice’s story is incredibly short, listed on VNDB in the “very short” under two hours category. However, there are many choices sprinkled throughout, leading to a variety of different endings. Factors such as Cassidy’s opinion of Elowen and of her estranged brother Alexander are shaped by the player’s choices, which then determines which ending the player sees. While Elowen and Cassidy are appealing characters, precious little time is given to develop them, but it does well within its time frame. 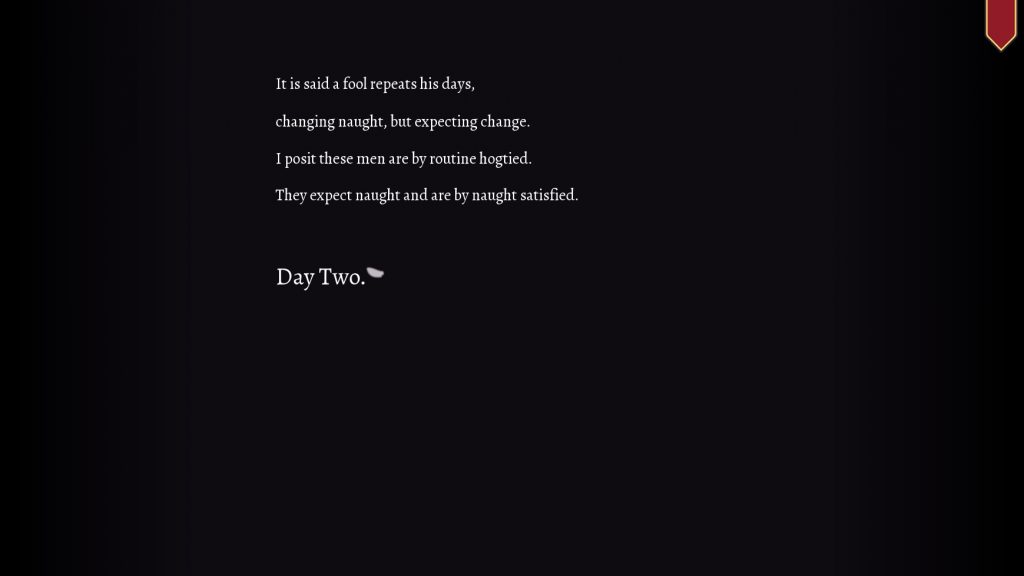 The game gives you a short poem between days, as well as each ending.

Without a Voice is a free visual novel created in a short time frame by a very small team, and it shows, especially in the visuals. There’s a definite amateurish look to it, although that in and of itself isn’t necessarily a bad thing as long as it’s still appealing, and they grew on me as I played. The backgrounds also have an almost painterly style, albeit somewhat blurry and occasionally a bit difficult to make out. Cassidy and Elowen have their own distinct text boxes that appear by their sprites as they speak, which is a nice touch that I’ve never seen in a visual novel before. The music has a suitable air of solitude and melancholy and fits the tone of the story very well. 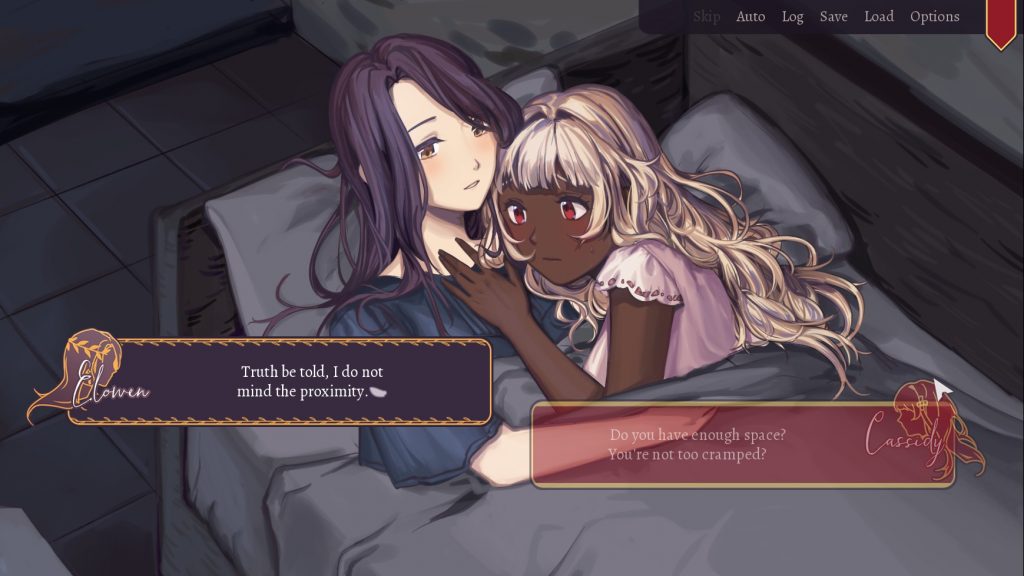 The unique text boxes for Elowen and Cassidy are an interesting touch that I’ve never seen before.

The melancholy, somewhat lonely tone is pervasive through the entire game, up until any end where Cassidy and Elowen finally begin to understand each other. Finally, getting a happy ending is satisfying for this reason, even in spite of the relatively small time investment. The short length also means there’s not much time to develop the romance fully, but that can be accepted as inevitable with a game as brief as this.

Free-to-play visual novels definitely have a tendency to be somewhat hit-or-miss. While on the one hand there are extremely high-quality titles like Katawa Shoujo, there’s a vast number of others that vary wildly in quality. Without a Voice falls on the upper end of this spectrum, although the fact that it’s yuri may help sway my opinion on it somewhat. If you think it may be up your alley, you have nothing to lose by giving it a look.

Full disclosure: This review is based on a Steam copy of Without a Voice given to Hey Poor Player by the publisher.