Two Legs Are Better Than One!

Watch the video review above or read the written version below!

Biped has the cutesy, sweet, childlike aesthetic of the Pixar film Wall-E with gameplay that encourages vigorous, intensive, blasphemous swearing at your co-op partner. Biped casts you as an adorable little two-legged robot who is tasked with activating beacons around a ruined world. However, this seemingly simple task is fraught with peril and your little robot will have to traverse countless obstacles designed seemingly for the purpose of knocking the poor thing down into an infinite void of doom.

The tutorial gives you the wondrous sensation of learning to walk all over again as you get to grips with movement, with every step from each leg being made with a click of a mouse or a tilt of an analogue stick. This style of movement immediately makes every step feel a lot more deliberate and tactile than the vast majority of games where movement is much more straightforward. It also allows for much more precision as you’re able to take tiny steps or raise your robot’s leg confidently into the air like a canine about to relieve itself. It’s altogether very intuitive, and though getting to grips with it can be tricky at first, it was never frustrating. 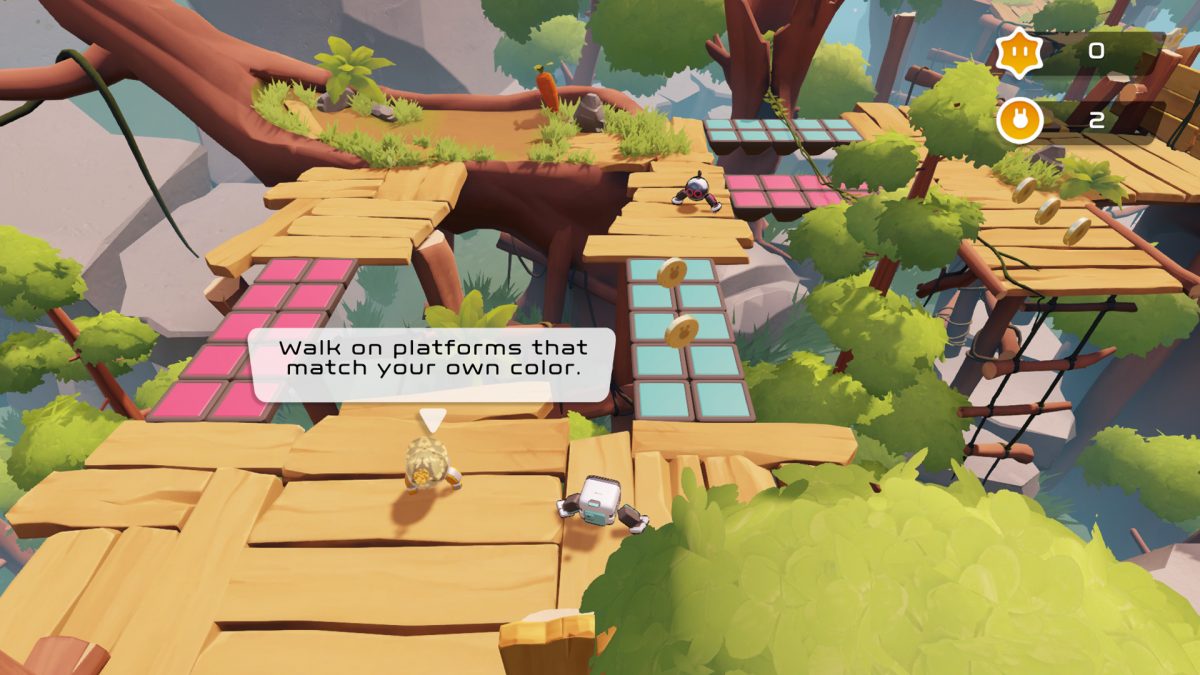 Since Biped is based around the titular concept of duality, there’s a co-op mode where one of your friends can play an equally lovely little robot comrade. Of course though, working with your ally can be as much of a challenge as it is a boon.

One of the first puzzles sees you and your counterpart at a precipice of a vast expanse with moving platforms periodically moving across it, with platforms alternating in colour. With one of the robots being pink and the other being blue, it seemed straightforward enough for my co-op partner, our beloved Editor-in-Chief Francis DiPersio, and myself. However, quite fiendishly, stepping on the platform with the correspondingly coloured robot causes the platform’s colour to change, meaning putting another foot down causes the platform to disappear. This means the pair of robots will have to stand on one leg and skillfully alternate their steps to move along the shade-changing surface and avoid obstacles placed in the way. Francis initially struggled with this concept, which sent us both plummeting to our deaths many times, but I very gently and politely coaxed him on (as you can see in the attached video above) but by the end of it he noted how satisfying it was to use teamwork to overcome this tricky puzzle. 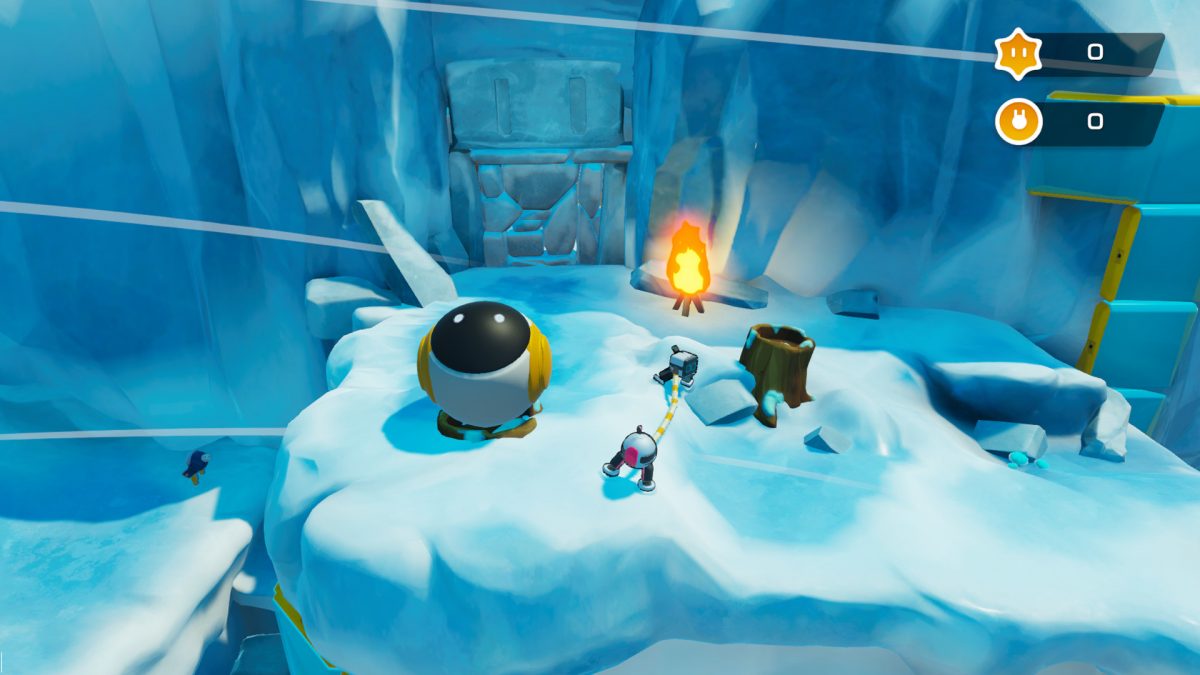 Every level we faced innovated brilliant new ways to test the co-operative mettle of our pairing.

The icy level had a particularly stand-out feature. It starts the two robots out tethered together. Though this could cause a little bit of friction within the team as the tether sometimes got tangled on the scenery, it was actually a rather brilliant way to solve various puzzles. There are certain walls the bipedal robots can walk up and along, but there are often gaps between one of these mysteriously sticky walls and the next. In these parts, we realised we had to use the tether to swing one of us along to the next foothold. Francis noted the comparison to the warbling Sylvester Stallone’s 1992 vehicle Cliffhanger, but I informed him that I was far too cool to have watched that movie and had only seen the parody in Ace Ventura 2

I noticed how though we were learning new skills we never got too settled, as new concepts were always being thrown at us. 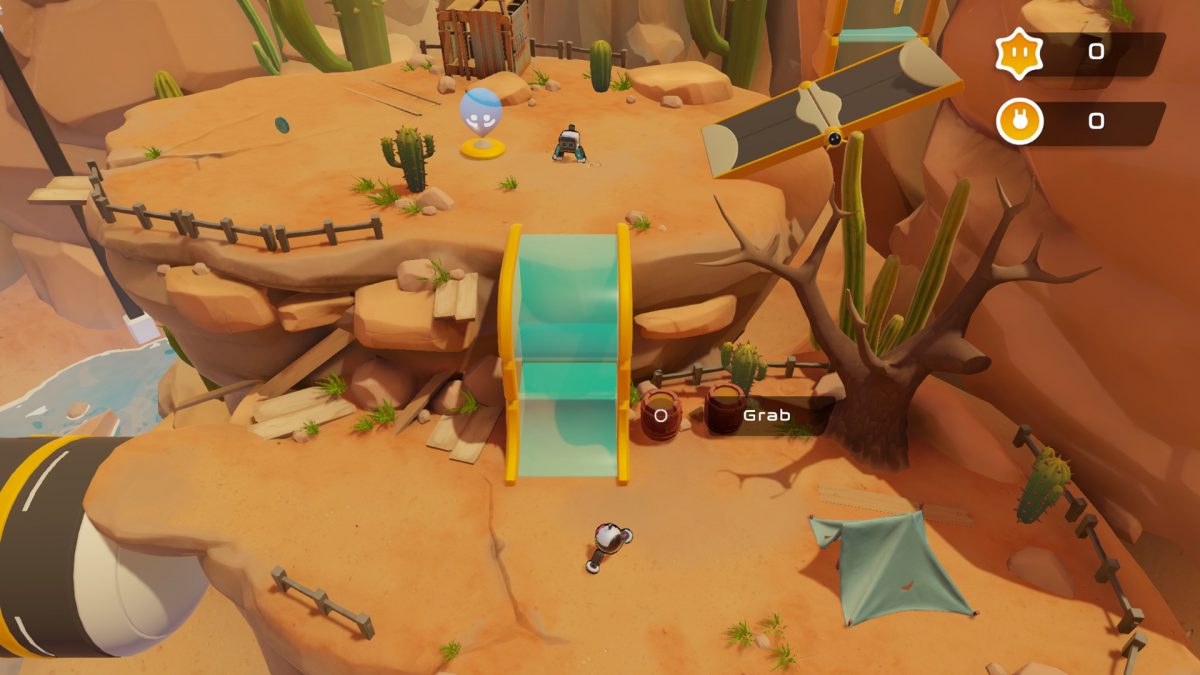 To my delight, I discovered Biped also features a solo mode. Now I was freed of Francis’ bumbling incompetence and ineptitude, I was able to put my razor-sharp focus on overcoming my own bumbling incompetence and ineptitude as I continued to walk off ledges with lemming-like frequency. The solo mode is quite similar to the co-op campaign but focuses a little more on standard platforming challenges of straightforward timing your dashes across collapsing platforms or between giant mechanisms that push you down into the ether. For certain sections it makes you co-ordinate with an NPC robot instead of your human controlled companion, such as in puzzles where you have to distribute your weight properly between you on seesaws and tumblers.

It’s not quite as much fun as the chaotic co-op mode, but it’s a well realized and entertaining challenge in its own right nonetheless.

There aren’t that many criticisms to be found of Biped other than its relatively brisk campaign, but for its current price, that can’t be quibbled with too much, especially since the levels are so well designed and original.

Biped, with its cute, wide-eyed robots that look like neon Fisher Price toys, lures you into a false sense that you’re in for an easy ride, when in fact you’re in for a surprisingly deep and challenging action-puzzler. Both Francis and myself came away having thoroughly enjoyed the experience. If you’ve a friend you’d like to spend an afternoon or two with playing through a brilliantly inventive physics puzzler with, getting your hands on Biped is a big step in the right direction.

Full Disclosure: This review is based on a copy of Biped giben to Hey Poor Player by the publisher