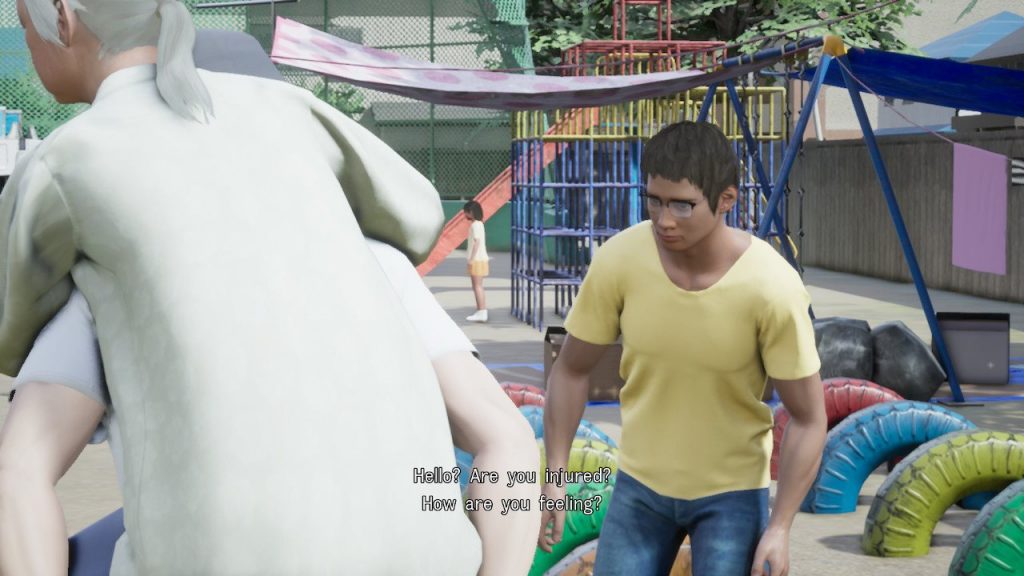 Shortly after you arrive at the school, you’ll encounter a kindly group of foreign students at the elementary school who are fighting to get by.

After you’re given a not so warm welcome by one of the locals of the shelter, take Kiyo west to the infirmary near the gym.

Of course, nothing comes easy in Disaster Report 4. Talk to the receptionist, and she’ll inform you the doctor just left for the playground. So you’ll need to hobble back where you came from with Kiyo in tow to find him.

When you reach the playground, you’ll meet Danny, a foreign exchange student, who calls the doctor over to examine Kiyo. As luck would have it, he’s none other than Dr. Nishi, the man you saved from the brutal White Coat recruiters.

After the cutscene ends, Danny will suggest you get something to eat from the supply line near the gym. Unlucky for you, a group cuts in front of you, and you’re unable to get supplies before they run out. Return to the playground empty-handed and see Danny. Luang, an exchange student Danny has been caring for, is hungry. Danny asks you to ask around to see if anyone has supplies they can spare.

Near the playground, you’ll find a platform loaded with garbage bags. Investigate it to find an Elementary Schoolbag (36 Storage). 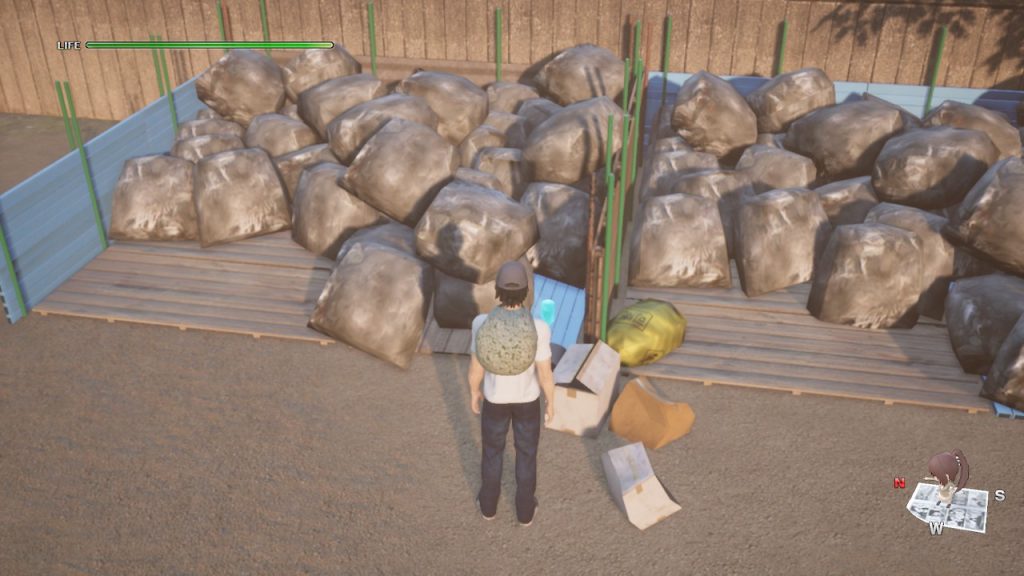 One man’s trash is another man’s treasure. Right?

Across from where you found the schoolbag, you’ll see a chicken coop. Enter it and collect the Chicken Compass.

Now, if you need to make more money or free up inventory space, from the chicken coop, run along the back of the school, and you’ll encounter a person who the game assures us is most certainly a “Physically Attractive Man” who will buy anything you want to sell him.

Now, go back around to the middle of the parking lot in front of the school. You’ll meet a man who’s been living in his car with a woman. If you ask them for food, they’ll drop a Rice Ball on the ground and give it to you. Waste not, want not!

After you pick up your dirty morsel, head to the other side of the school near the gym, and you’ll find a pervert accosting Rowan. Tell the men they can touch you instead, and they’ll throw a Plum Onigiri at you.

Once again, return to the trash pile where you found the schoolbag, and you’ll see Danny being confronted by a man. After a brief scuffle unfolds, make your way back to the playground to reunite with everyone.

Following dinner and a conversation with Danny, Dr. Nishi leaves to work at another shelter. As soon as he’s gone, a foreign child Rowan was talking to falls ill and asks for water.

Luang tells you he knows where some water is, and Danny gives you a Plastic Health Recovery Bottle which you can use to collect the water.

Walk past the chicken coop to the rear corner of the school, and you’ll see water droplets falling from the roof of the building. You can gather these to fill the plastic health recovery bottle.

Before bringing the bottle to the sick child, go behind the nearby portable toilets to collect the Red Pencil.

Now make your way back to the playground where Rowan and the foreign child are waiting. After giving the child the healing water, a man will come over and ask if you can spare some for his kid. If you do so, he’ll ask you to visit him near his car. 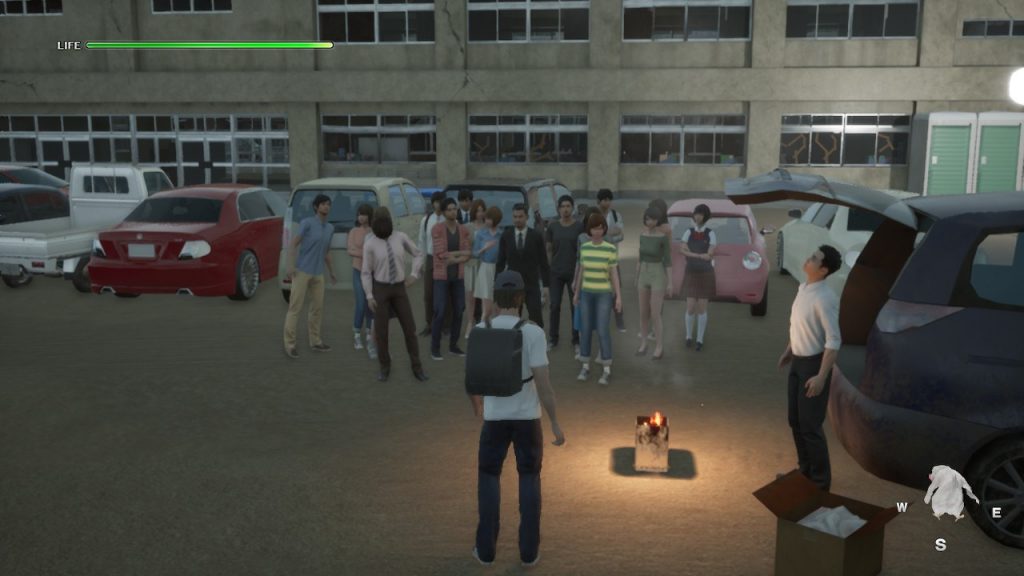 This whole involuntary snake oil salesman thing is getting a bit out of hand.

Go and find him. He’ll be standing at a fire in front of his car straight ahead of the playground. An associate of his will approach and ask you if you can heal his wife with the water. Before you know it, this miracle tonic has drawn quite a crowd, and you’ll need to make several trips back to the spot where you found the water droplets to satisfy the people’s rabid demand.

Eventually, the mayor will appear and ask that you go to the gym to heal his grandson’s chronic illness. After you give him the water, he’ll ask that you treat others in the gym. The only problem is your bottle is empty, and you’ll need to return to the rear of the school to refill it. 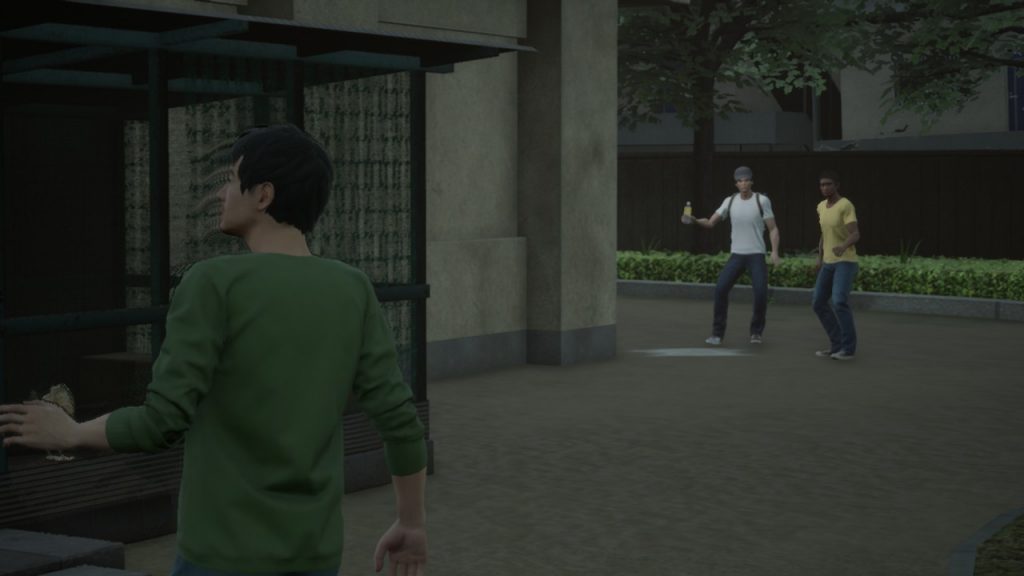 What’s the problem? Roof water is good for the skin and builds character.

When you go to fill the bottle, someone will see you and discover that you’re trying to give everyone regular water. Danny will intervene, but the crowd is completely enraged at this point. Despite your best efforts to calm them, you’ll both be chased out of Kuchinashi Elementary Evacuation Shelter in disgrace.

In our next Disaster Report 4 guide, we’ll walk you through Housenka Shopping Street. 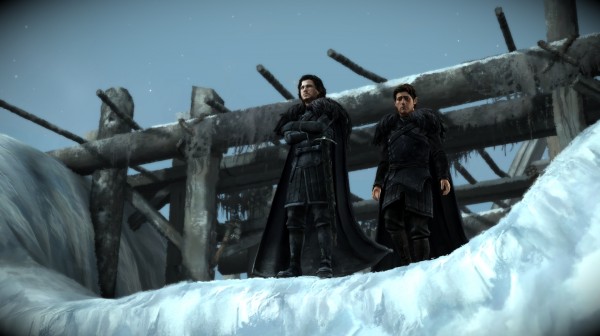