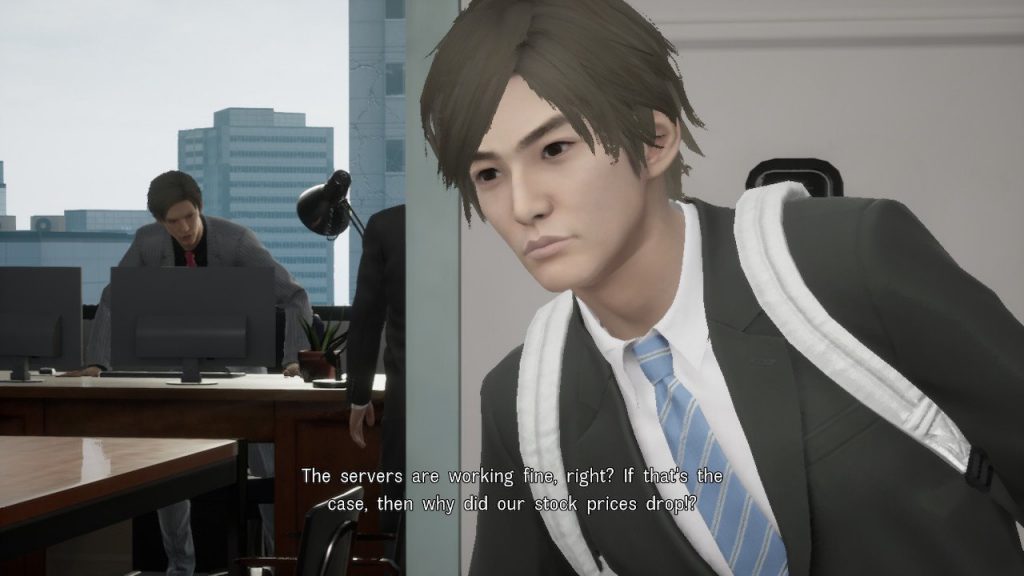 Vestola’s president Kirishima is in a panic as the price of his company’s stocks is in freefall. Is there more to what’s going on than the earthquake?

Ok, with Ajisai Crossing now in the rearview mirror, you’ve made it out of the frying pan and into the fire. From the Kakitsubata save point, proceed South then until you reach the intersection then head east.

Approach the slightly opened shuttered door, and you’ll trigger a cutscene where Vestola President Kirishima and his secretary Wakamoto climb under the shutter and into the company’s headquarters. Time to crawl under the door and see what the jerk of an executive is up to.

After you make your way onto the other side of the shutter, turn to your right, and you’ll find the Musical Conductor Compass sitting on a bench at the end of the hall.

Now that you’ve got the compass, it’s time to go back down the hall and turn right. There are a few rooms to the side that you can enter, but they’re empty. Just head down the hall and climb the stairs to the second floor. Make a left at the end of the corridor, then turn right to eavesdrop on president Kirishima and his secretary, who suspect two employees of helping a rival company spread rumors about Vestola. 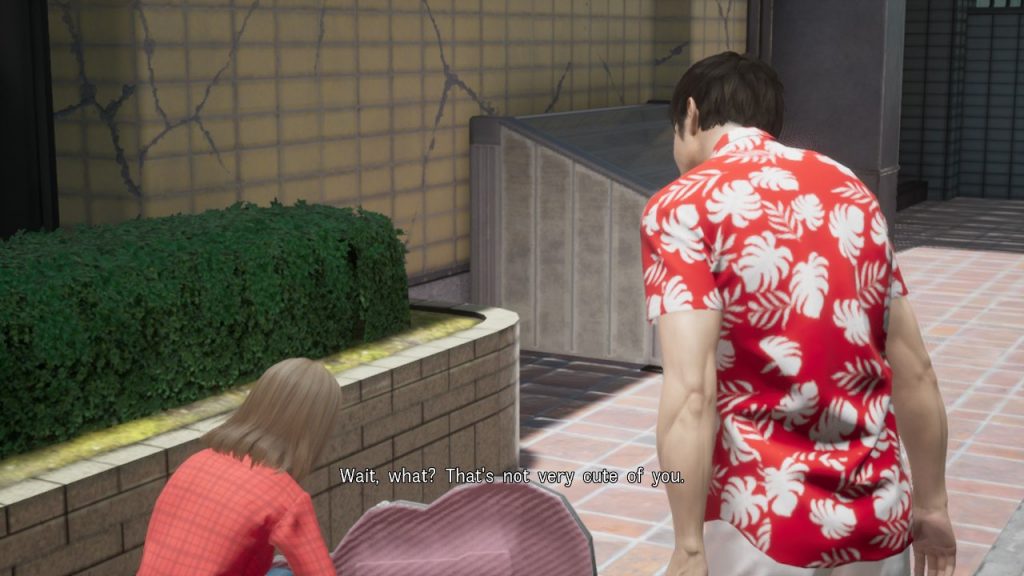 If only she played Freebird like the gentleman asked…

After listening in to their conversation, you’re all done here. Now it’s time to head back the way you came from and exit the Vestola building. Once you’re back outside, start walking east, and you’ll trigger a cutscene with a street musician who is being harassed by a local man. You can choose to Intervene or observe.

Following the cutscene, move as far as you can to the left side of the road before continuing east down the main road, as an aftershock will cause a massive length of the freeway overhead to collapse onto the busy streets below, instantly crushing a few dozen hapless civilians. Be sure to duck and cover, or you’ll suffer the same messy fate.

Well, that was traumatic, wasn’t it? Unfortunately, we’re too busy to grieve the victims of this tragedy. After things return to normal, look for an opening in the expressway and climb on up. Once you mount the rubble, continue East to reach the far side of Kakitsubata Main Street.

After you descend the fallen length of the freeway, enter the burger shop on the corner. Walk upstairs to find the Schoolbag (25 slots) on a table by the window.

Be careful when leaving the restaurant as more aftershocks are coming. When they subside, take the stairs down to the subway.

The next part of our Disaster Report 4 guide will through “Inside Akebonoutsugi Station.”

Sound Shapes’ Nerdy Cousin Typography is often the brunt of many jokes concerning geeks and nerds alike. While some find the art and history of type face and font…