An Origami Journey Into Another World. 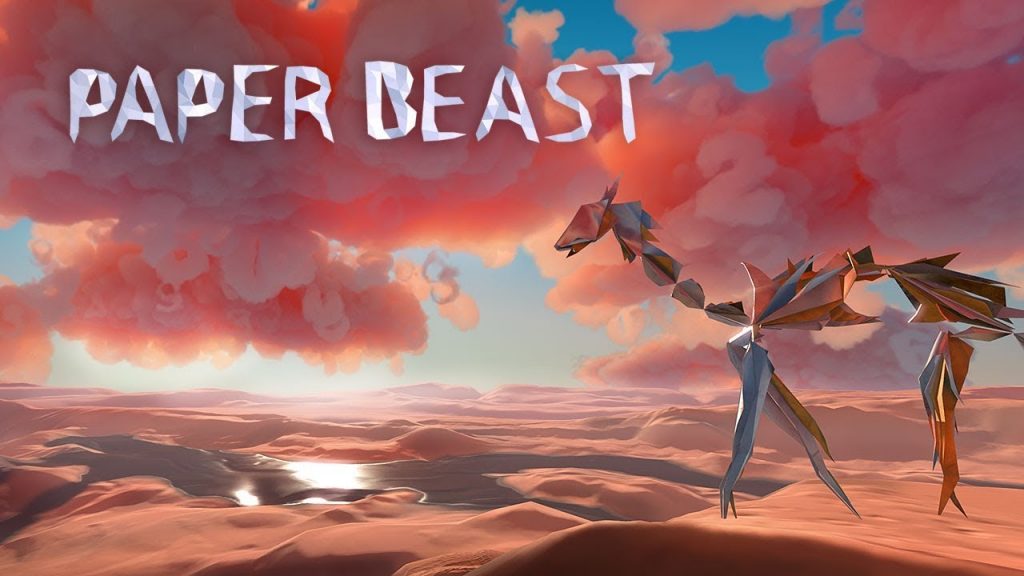 Pixel Reef’s Paper Beast is a game that defies description. In my more than 30 years of playing video games, I’ve never experienced anything quite like it, and I’m not sure I ever will again.

Set against the backdrop of a surreal desert dreamscape, Paper Beast is a game about exploring a strange land and interacting with its flora and fauna to solve puzzles and progress in your journey. As for what the mission is about, exactly, remains mostly unclear for much of the game’s 4-hour running time. But really, that’s not important. I was too busy taking in the imaginative world, entirely populated by papercraft creatures with their unique purposes and ecosystems, to care. There were countless times I just put my controller down to stare in awe at a towering beast as he slow and purposefully lumbered in the distance as if on some unknown pilgrimage, or watched as the local paper predators stalked their prey through dense foliage.

That Paper Beast would whisk me away to a place unlike I’d ever seen before is perhaps unsurprising. Eric Chahi, the game’s creator and founder of developer Pixel Reef, is no stranger to crafting haunting alien landscapes. After all, he’s the mind behind Out of This World (known as Another World in other territories), a game that’s captivated players’ imaginations for nearly three decades. But even knowing the developer’s pedigree, I found myself mesmerized by Paper Beast’s bizarre and beautiful living world and its origami inhabitants. 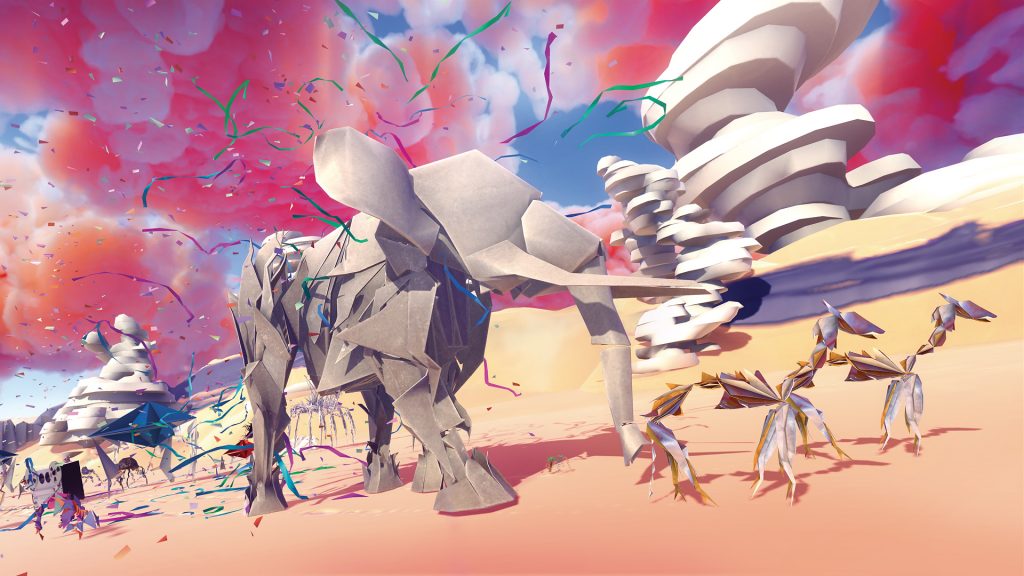 The main gameplay beat of Paper Beast revolves around interacting with the creatures you encounter and using their unique abilities to solve puzzles to progress in the story. Using either a pair of PlayStation Move controllers or a Dualshock 4, you can grab objects and animals to interact with them – so long as they aren’t too heavy. For example, one puzzle may require you to distract a fearsome predator by waggling a plant like a cat toy to prevent it from gobbling up an animal you need to keep alive. Other times you’ll need to use the carrot and stick approach to lure hungry critters to an objective with food.

Things get much more interesting the deeper you get into its eight chapters, though. Paper Beast has a surprisingly robust physics model powering it, which allows you to do things like using tube-like plants to siphon water from a submerged pathway and jettison it elsewhere so that you can proceed, or even terraform the landscape by having dog-like animals dig makeshift trenches to control the flow of water in an area or smash balls of sand to fashion ramps to help scale sheer cliffs.

Towards the end of the game, you’ll even have to deal with things like powerful gusts of wind that can blow lighter lifeforms away. Obstacles like this will force you to think of innovative ways to keep them anchored so that you can get them where you need them. Though even the most creative minds may find themselves scratching their heads before Paper Beast’s journey comes to its conclusion.

I’ve Been Through The Desert On A (Paper) Horse With No Name. 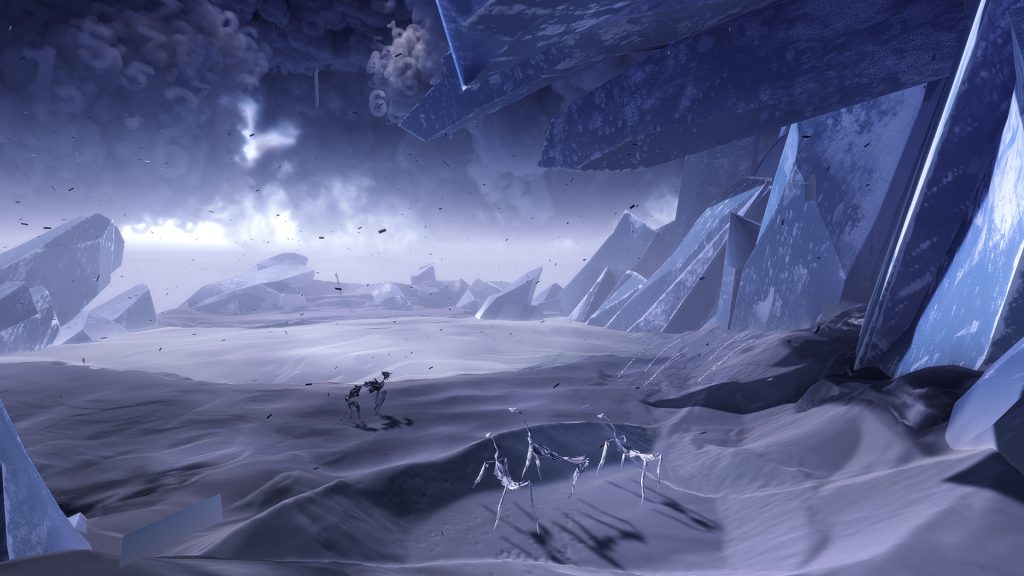 The game’s story unfolds through some jaw-dropping set piece moments that are brought to life with rich 3D sound and imaginative visuals.

Paper Beast does next to nothing to guide the player. With that in mind, you’re probably going to find yourself spending plenty of time experimenting with everything around you before you solve the game’s more esoteric brain teasers. As someone who generally doesn’t like the way many modern games feel the need to point you exactly where you need to go to progress, I found the game’s lack of hand-holding refreshing for the most part. However, there are times where the feeling of flying blind can become a little frustrating.

There were several occasions where I found myself doubting the solution I had come up with was what the developer intended – even when it was. I would find myself floundering about, waiting what seemed like an ungodly amount of time for a creature to dig a hole or some other action to happen which would allow me to venture to the next area. Moments like this can hurt the game’s pacing at times. Some of this can be credited to Paper Beast’s storytelling, which unfolds through lengthy – and often visually impressive – setpiece moments. But more often than not, it’s the game’s pacing itself, which revolves around the actions the world’s inhabitants who move at their own, deliberate pace regardless of what you have in mind.

Despite these occasional roadblocks, there’s a real sense of accomplishment that comes from overcoming each obstacle. From start to finish, Paper Beast actively encourages the player to think outside of the box – something very few games dare to do these days. And for that, developer Pixel Reef deserves to be commended.

Ghost In The mâché. 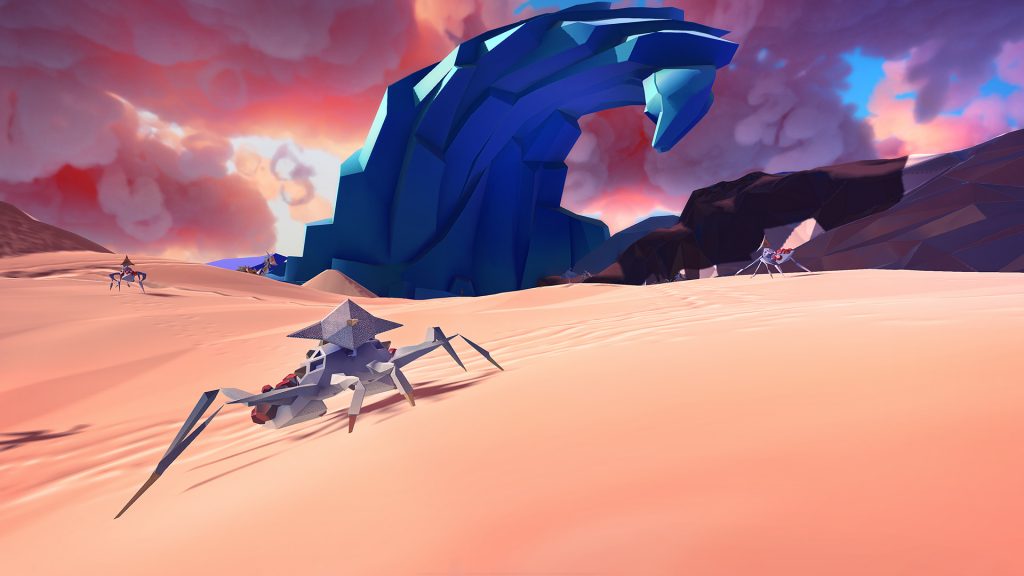 There’s no shortage of brilliant vistas to be found in this game.

Whether you’re using the PlayStation Move or DualShock 4, interacting with Paper Beast’s inhabitants and the environment is a breeze. It’s easy to scoop up a stray Papyvorus (the game’s docile, deer-like creatures) and reunite him with his herd, or pluck some weird alien foliage from the ground and use it to bind two beasts together. Throughout my four hours spent with the game, I never found myself faulting the game’s very responsive motion controls when things sometimes didn’t go as I had planned.

Sadly, Paper Beast only supports teleport locomotion and snap turning, which does tend to hurt the immersion. Warping short distances at a time through long, mostly static canyons can start to make the game feel like a slideshow at times to the point where I was getting flashbacks of playing Myst on my friend’s Tandy as a kid. Given just how fascinating the game’s world is, it’s a shame that the illusion of wandering through this brilliant landscape shatters with every step you take.

Here’s hoping that developer Pixel Reef adds support for free movement and smooth turning down the road. The game would benefit greatly from the addition of these features.

If you’re looking for a VR experience that defies categorization, Paper Beast will not disappoint. While occasionally a bit too cryptic at times, it’s a fascinating fusion of the simulation and adventure genres that will keep you glued to your PSVR from start to finish. With a surreal and often melancholy main story to experience and bonus sandbox mode that allows you to craft your dynamic ecosystems and watch them come to life, it’s one of the more robust offerings for Sony’s headset in recent months. If the lack of handholding doesn’t bother you and you’re in the mood for something totally unique, give Paper Beast a try.