A deep dive in space exploration 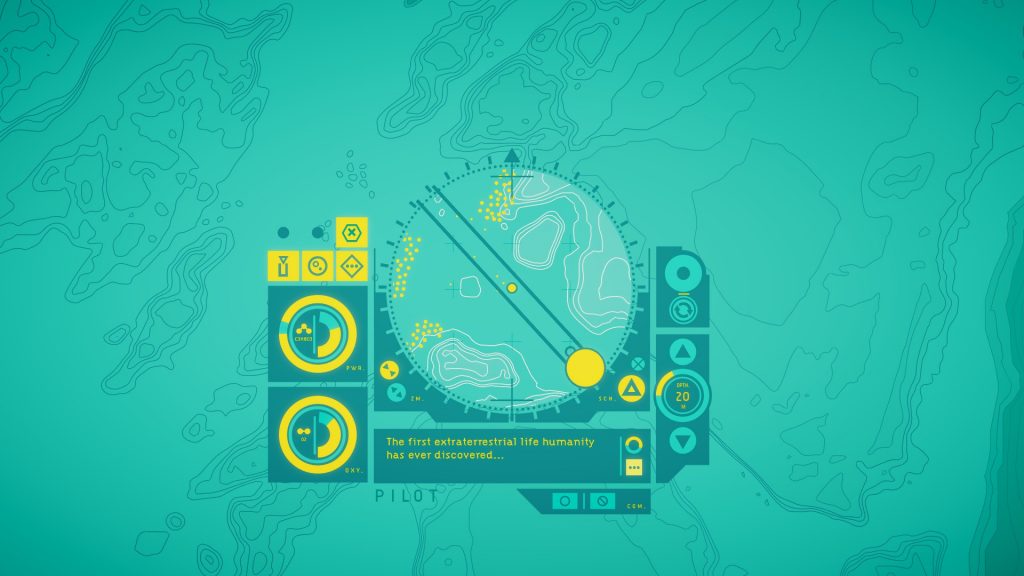 There are some games that are so inherently tied to what you are doing in that moment that the enjoyment is felt through your direct actions. In FPS games, there’s a little adrenaline rush from getting kills, followed by an immediate wave of frustration should death occur. In action games, it’s all about timing and performing tasks correctly — shoot this, dodge that, maybe even a few QTEs depending on the game’s age. These games directly involve you — being in the moment, syncing perfectly with everything around you; just like driving, you need to pay attention to your surroundings and what’s happening in order to focus on getting the tasks done.

And then there are games where focus isn’t totally necessary. Games where you can just chill, relax, and let the game happen to you. Games that make you feel, even plug into something more primal, more spiritual. Sure, you’re still performing the necessary tasks, but since you’re “not driving,” you can zone out if you want to, enjoying things at your own pace and ride on vibes.

I believe In Other Waters falls into the latter category, and the soothing experience was a warm welcome that I won’t soon forget.

Developed by Jump Over The Age and published by Fellow Traveller, In Other Waters is best described as a predominately text-based adventure game with minimal graphics. Available on Steam for both Mac and PC and the Nintendo Switch, players take on the role of a mysterious AI assisting a xenobiologist searching for her missing colleague on exoplanet Gliese 667Cc, the pair cataloging a thriving alien underwater ecosystem along the way. Players interact with the xenobiologist, Dr. Ellerey Vas, through an interface overlaying a topographical map of the exoplanet. Can the two of you find the missing Minae Nomura and figure out why she kept silent on this vast ocean teeming with life?

The controls in In Other Waters are simple — like, impressively so. By using a mouse and the “w” button, players will immediately understand how to interact with the interface as if they’ve done it a million times before. When the UI is so critically important to the game, it’s crucial to nail the primary interface players will connect with, and In Other Waters miraculously achieved this seamlessly. I’ve honestly never seen better UI for such a game; in fact, it was so perfect it greatly assisted with the immersion factor, making me feel instantly connected to the role I was supposed to play. A rousing round of applause to the developers for this feat alone — the UI and controls are a literal masterpiece. 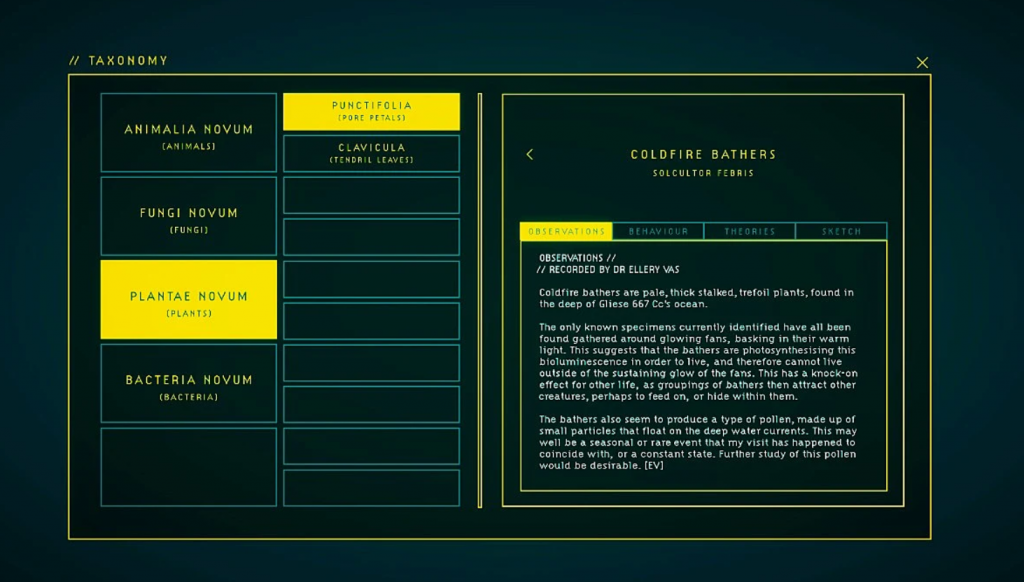 The graphics are minimal, but serve the aim of the In Other Waters well; as an AI, it stands to reason that you wouldn’t see things the same way a human would. While Vas takes in all the natural life that surrounds you two, you see only a topographical map with indicators of life detected by your scanners. If you feel like you’re missing out, I wouldn’t — Vas carefully and succinctly describes everything she encounters, letting a vivid imagination fill in any holes. Through her eyes, we see sprawling ocean floors brimming with alien life. We hear the hums of the organisms as we study them closer. We feel the cold currents as we explore winding caverns. It’s all relayed to us via text, so we don’t miss a single thing alongside our human companion.

The storyline is predominately focused on finding Vas’ colleague, Nomura, but players will find they’re spending most of their time cataloging organisms in In Other Waters. Collecting samples and bringing them back to the ship for analysis is a major part of the game, although completing it will feel optional. For those who really enjoy learning about Gliese 667Cc, it’s worth it to painstakingly collect every sample you can get your hands on. Plan your trips carefully, though — with only nine slots in your inventory, sample space is at a premium, which can feel frustrating since if your inner scientist wants to investigate everything. 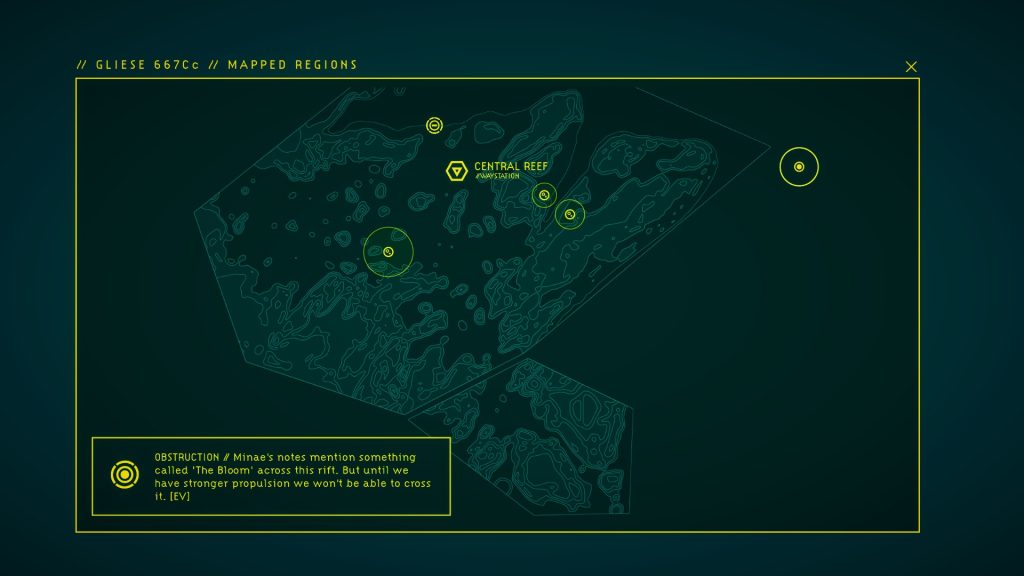 Speaking of collecting samples — it’s not just the lab that finds a use for them. Depending on the specimen, you can use them to interact with the world around you. A literal forest of stalk-like plants blocking your way? Use a shillsac to blast through them (don’t worry, they grow back). Running low on power? Find some calcified organisms and… crush them? and then… rub them all over your body? Look, I’m not sure how it works but whatever it does you get more power. Samples you collect can assist you in your journey, so you’ll want to make sure you have room for certain samples as you explore.

Because In Other Waters is so minimal, even the slightest misstep can feel like a big issue; my biggest one being that it’s really easy to get lost. I suppose that comes with the territory — after all, we are in uncharted waters. What doesn’t make sense, though, is that you can access a map of the immediate local from your base but can’t somehow take that information with you while exploring. I would resort to taking a photo with my phone and try to look at it during my excursions, but the maps didn’t seem to match. Additionally, the hinted instructions on what to do next disappeared after I quit the game to take a break and came back to it, meaning I have no idea what to do next in one  particular mission. Since your suit gradually runs out of power, there’s no time to get lost, which meant a wrong turn inevitably ended with me fruitlessly backtracking to base with nothing to show for it except wasted time. 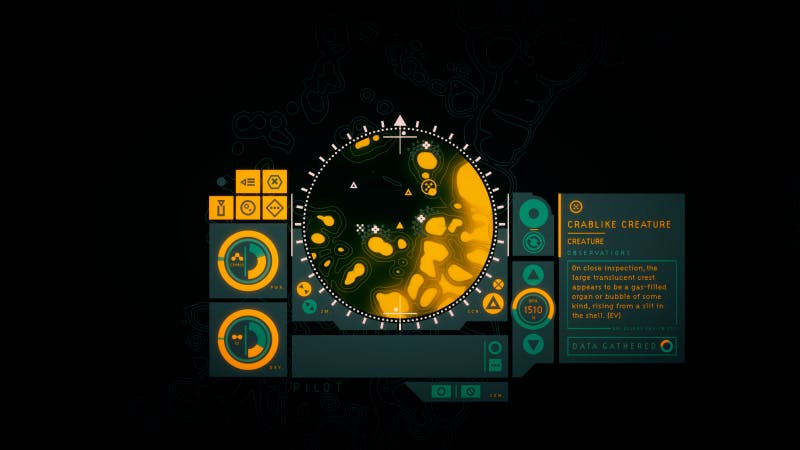 Additionally, because the controls were so delightfully intuitive, it must have felt like the developers didn’t need to add a true tutorial or explanation of controls. Which is honestly fine, you don’t really need one; however, there were a few instances where even one line of instructional text would have been incredibly beneficial. After a long, long trek underwater, I’d collected a single new specimen that was very hard to get. I tried clicking on it in my inventory to see if there was any additional information, and it just straight up disappeared. After what felt like hours to get that specimen, it was just… gone. All that time for nothing. I was pretty aggravated, and it would have been nice to have a warning, considering some items you can click on and they don’t disappear. The inconsistency made me afraid to click on any new samples for fear of losing them, and that full immersion was immediately lost.

Some of these complaints feel mildly nit-picky, but for such a minimalist game, the misses tend to be accentuated. With all that being said and done, In Other Waters nails everything else. The atmosphere is palpable, the music is soothingly ambient, and the gameplay itself is divinely unique. There’s something refreshing yet tantalizing about not being able to truly see the phenomenal discovery of other-worldly life and instead reading about an organism’s description on its appearance and behavior and envisioning it. The imagination can come up with much more interesting things than whatever is laid out before us, and the dev team should be lauded for their decision to let players do the heavy lifting in this regard.

In Other Waters is a thrilling, non-violent gem focusing on discovery of life among the stars in a place humanity didn’t think to look. This game proves that sometimes simplicity is best, it’s minimalist approach to complicated technology an absolute triumph. The immersion is incredible, considering the genre, and the concept is dramatically fresh to the point where I literally feel in awe of how much has been accomplished by so little. Of course, the game is not without its hiccups, and those are slightly more magnified due to the minimalist nature, but all can be forgiven when everything else is taken into account. If you want something vastly different than anything else you’ve experienced with enough familiarity to suck you in from the get-go, you have to dive into In Other Waters.

Editor’s note: This review is based on a copy of In Other Waters given to HeyPoorPlayer by the publisher.