A Sci-Fi Dance Party That Delivers Little Bang For Your Spacebucks. 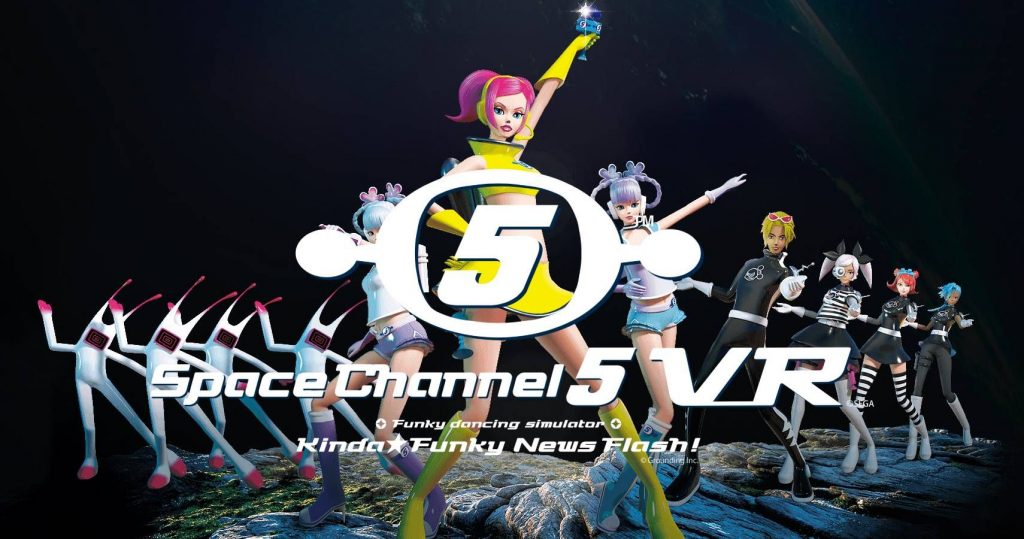 It’s hard to believe it’s been two decades since Space Channel 5 first rocked the Dreamcast. Now, the quirky rhythm series is back to bring the boogie to the PSVR with Space Channel 5 VR: Kinda Funky News Flash.  Designed from the ground up for VR, the game transports players into the dancing boots of either Lou or Kee, rookie reporters under the tutelage of series protagonist Ulala. Unlucky for them, just as their first assignment is getting started, those meddling Morolians – the series’ signature invading aliens – attack, and it’s up to groove your way to victory and save the human race.

When it comes to recapturing the toe-tapping tunes and 60s sci-fi Mod style of its Dreamcast and PS2 predecessors, this virtual reality spinoff doesn’t miss a beat. But a severe lack of content brings this intergalactic dance party to a close just as it feels like things are getting started. 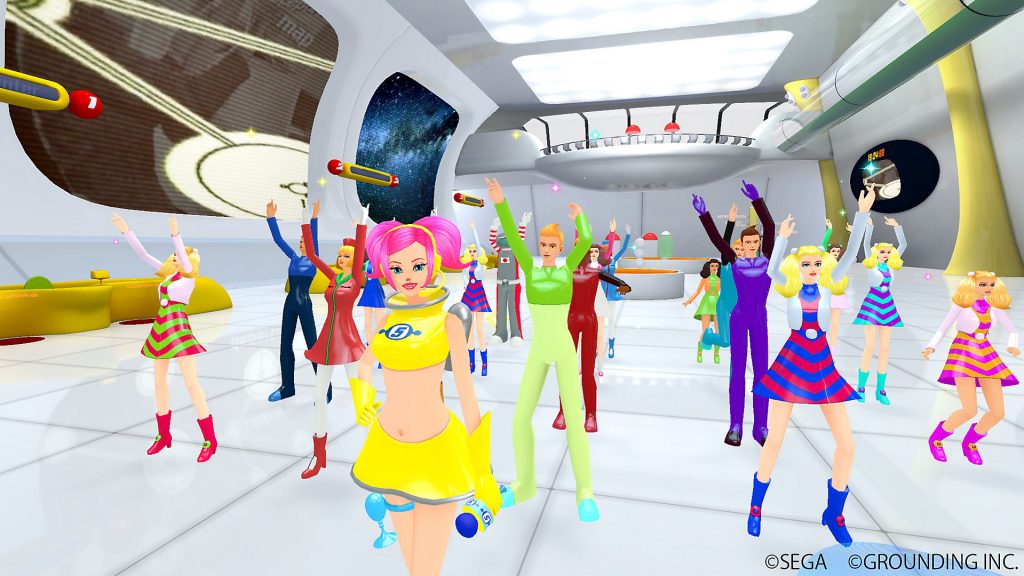 Like in the original game, the goal of Space Channel 5 VR is to beat back alien invaders with the power of dance. Each of its four stages (yes, you read that right, four of them) pits the player against hordes of sashaying space pirates and other deep-space disco demons in heated dance battles. Each encounter plays a bit like a psychedelic game of Simon as you attempt to imitate the dance moves of your opponents, dodge oncoming attacks, and eventually overpower the alien scum with your heart-blasting “Chu” beams.

When it comes to its challenge, Space Channel 5 VR is a bit of a cakewalk compared to the original game. Sure, missing a move will deplete one of the three hearts on your health meter. However, you’ll rarely have to worry about dying, as your health will fully recover whenever you successfully perform a single gesture. The game is also very forgiving when it comes to timing your moves, so you don’t have to worry about being exactly on rhythm for your gestures to count this time around.

There are about a dozen different dance moves you’ll need to master. But don’t stress, my rhythmically impaired friend. You don’t need to be Bobby Brown to ace the performances Space Channel 5 VR throws at you. Each gesture is very straightforward, merely requiring you to strike a specific pose – such as a flex or pointing both wands to the sky –  or move your arms in a particular direction.  That’s really all there is to it. And surprisingly, Sony’s aging PlayStation Move motion controllers – which are required to play the game – do a pretty admirable job of keeping up with the on-screen antics.

To Shibuya-based developer Grounding’s credit, during my time spent with the game’s handful of modes, I only experienced a loss in tracking on a couple of occasions. And this was almost exclusively when performing the side-step maneuver — something that came of no surprise given the PSVR hardware’s limitations. That said, Space Channel 5 VR’s gesture-based gameplay is quite accessible, making it very suitable for casual VR gamers and newcomers to the medium. 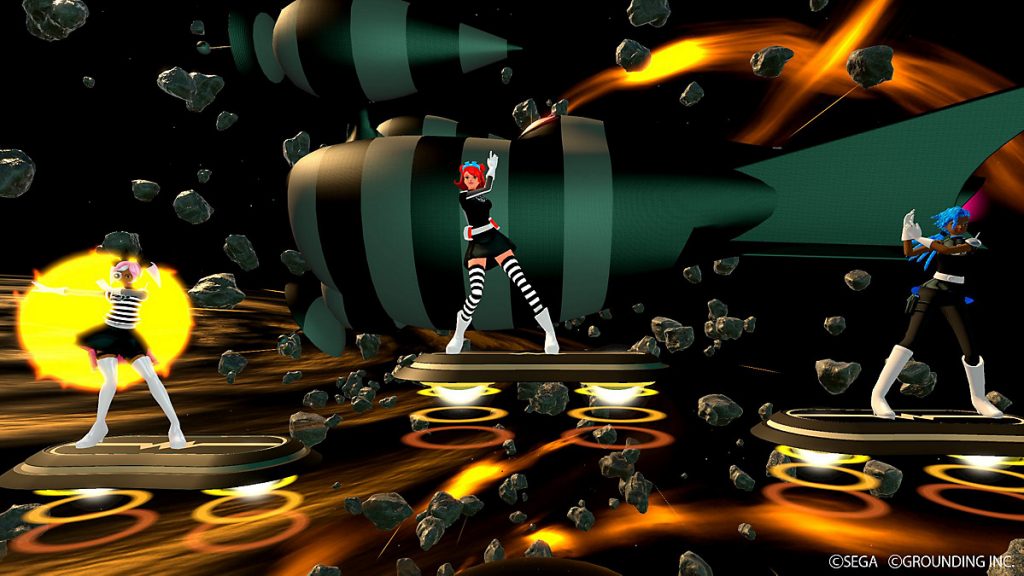 Here’s your chance, do your dance at the Space Jam. Alright?

Ok, so we’ve established that Space Channel 5 VR: Kinda Funky News Flash plays well and manages to capture the spirit of the series. So, you’d think that fans of the franchise would consider this a must-buy addition to their PSVR library, right? Well, not so fast. As I said at the outset of this review, its story mode only offers an anemic four stages. Now, before you get your latex skirt in a twist, I know the original game only featured four reports as well, but things have been pared down significantly for this VR release. While you can complete the original Space Channel 5’s four reports up in about an hour, this game’s story will only take most players about 25 minutes to experience from start to finish, which is, quite frankly, inexcusable for a $40 title.

What’s funny is that the menu screen makes it seem like there’s quite a bit here. In addition to the Story Mode, there’s an arcade mode. Unfortunately, this isn’t at all what you’d assume it is. Rather than offering you the chance to play through the stages sans story padding like you’d expect; instead, Arcade Mode is a glorified tutorial where you can play the game’s introductory stage without having to worry about taking damage. And yeah, it’s just as exciting as it sounds.  There’s also a Dressing Room Mode, which allows you to customize Ulala’s in-game attire. However, with just a couple of costumes and colors to choose from, you have to wonder why Grounding even bothered to incorporate it.

Once you finish the story, there’s a 100-floor Dance Trial you can compete in. But again, with only a small handful of songs in the game, it’s hard to imagine anyone wanting to spend to see this challenge through to its conclusion.

Humanity can wait for a Flash Sale.

Space Channel 5 VR: Kinda Funky News Flash makes a good first impression with its nostalgic visuals, funky tunes, and easy to pick up gameplay. It’s just a shame that once you’ve wrapped up its five-minute intro chapter, you’ve already seen a quarter of what it has to offer. With a story that almost any player should be able to finish in less than a half-hour and a dull smattering of throwaway extra modes, I’d have trouble recommending the game to even the most die-hard fans of the series.