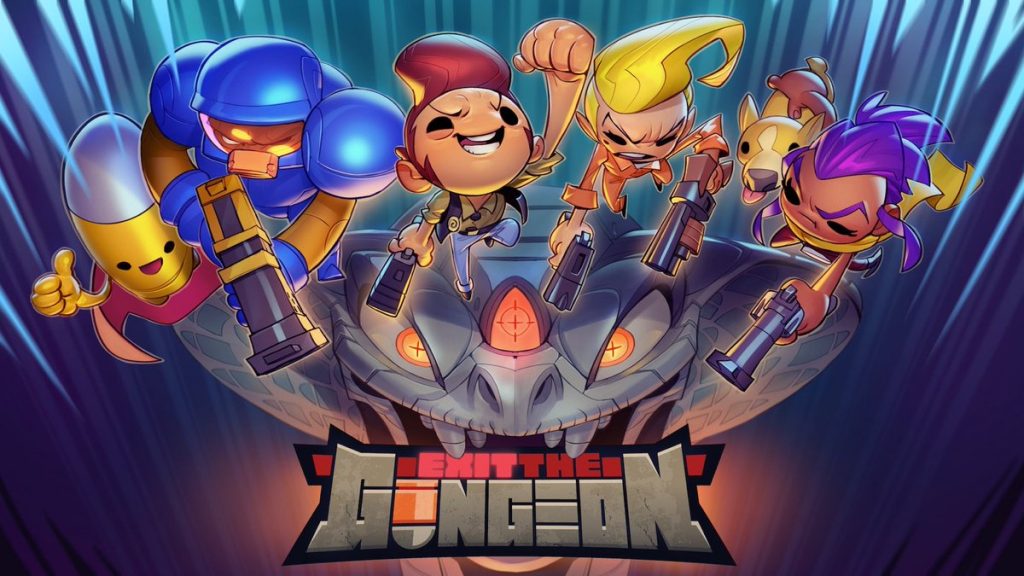 Well, folks, it’s finally time. We’ve, at this point,  spent years entering the gungeon alongside the Pilot, Marine, Hunter, and Convict (plus a few others). There’s been plenty of shooting, looting, shooting, dying, and shooting. And, when everything’s said and done, we even managed to kill off our brave gungeoneers’ pasts. But, now that that’s all done and over with, the only thing left to do is leave. But, seeing as how their entire attempt to, *ahem*, Exit the Gungeon, has been made into a game, you know that it’s going to be anything but easy.

A Blessing in Da Skies 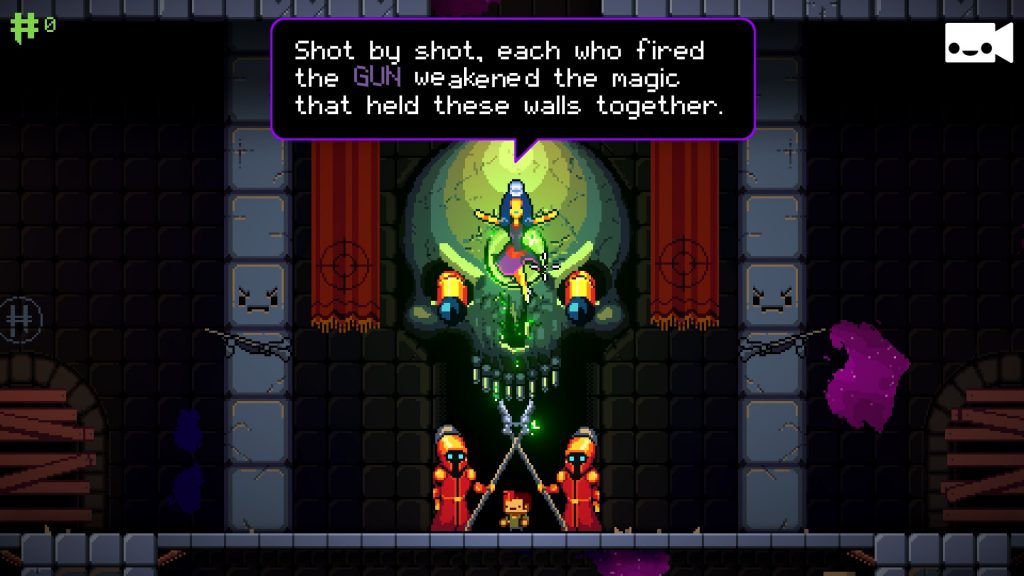 What, are you saying that we had something to do with this?

Exit the Gungeon‘s plot is simple. So simple, in fact, that I probably shouldn’t even give its own section in this review. But, old habits die hard; and, thus, here we are. Basically, Exit the Gungeon is the story of (although I’m sure you’ve figured this out, already) the Gungeoneers’ attempt to escape from the Gungeon. Having already braved its bullet-filled depths, and successfully killing their own past afterward, the Gungeoneers are ready to make their escape from the Gungeon. But it seems as though there’s a bit of a problem. You know the Gun That Can Kill The Past? Well, it turns out that using that messes with the space-time continuum. And, considering that it had just been used multiple times, the fabric of reality isn’t doing such a great job at keeping itself together. Fortunately for the Gungeoneers, however, all hope isn’t lost. By the grace of the Sorceress (and the guy in charge of maintaining the Gungeon’s elevators), the Gungeoneers have been given a chance to… Exit the Gungeon!

So, as I’ve already said, Exit the Gungeon‘s plot is simple. At face value, that might seem a little disheartening. After all, Enter the Gungeon‘s plot, though not the most detailed thing ever, was honestly pretty intriguing—especially toward the end of the game. But that’s just it; Exit the Gungeon is basically just an extension of Enter the Gungeon‘s ending. You’ve already done everything that you need to do; all of the drama of the Gungeoneers’ past is dead and gone. There’s nothing else that you need to do but leave. And, after seeing it from that angle, it’s easy to appreciate the simplicity in this game’s story. 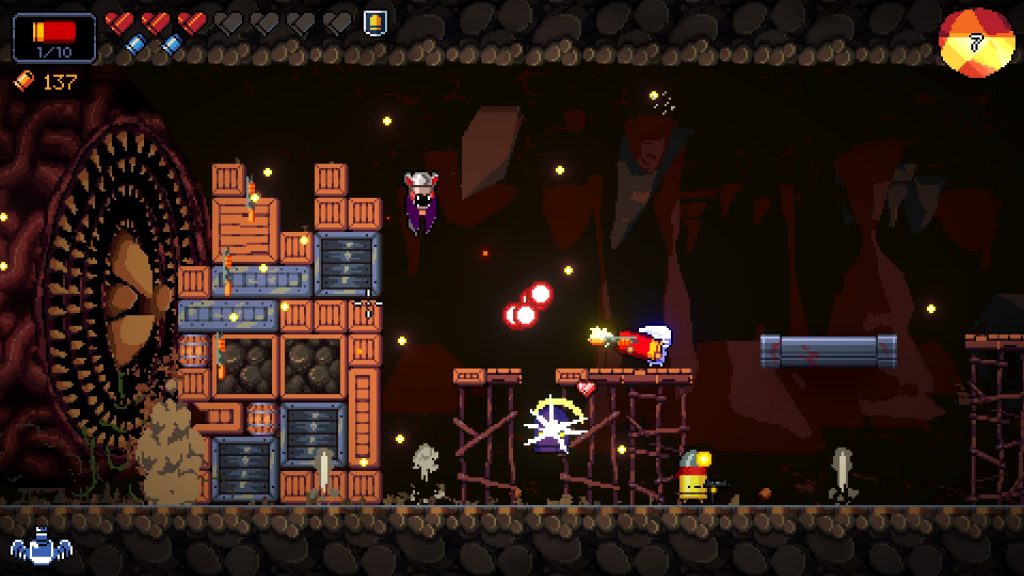 Hey, wait, this isn’t an elevator!!

Technically speaking, the gist of Exit the Gungeon should feel pretty familiar. The game once again has players going from level to level, shooting, looting, killing a boss, and repeating. But that’s where the major similarities end. First of all, levels aren’t entire floors like they were in Enter the Gungeon. Instead, each level takes place on an elevator—most of which make occasional stops here and there. If this game still played like the first one, that would be really bad. But it doesn’t! Exit the Gungeon is, in fact, a platformer. And an arcade-based one at that. Rather than exploring your surroundings, Exit the Gungeon is entirely focused on combat, with the player doing little else aside from shooting down swarms of enemies. Do any of you remember those old Newgrounds games where you played as a stick man in a room, killing other stickmen? They were, like, all the rage in the early-mid 2000s, so I’m sure that at least some of you have. Well, that’s basically this game. Except, you know, a little more filled out (pun intended).

I should also probably talk a little bit more about the elevators themselves, too. Namely, the fact that they change depending upon which character you’re playing as. And, while you might be thinking, “how much can an elevator actually change?” I can promise you that the answer to the question is “quite a bit.” Take the Pilot, for example, who literally has an elevator that the player has to steer around to avoid hitting hazards, and whose following elevator is comprised of platforms positioned atop of balloons which are continually being popped by falling stalactites. Heck, sometimes they aren’t even elevators at all; one of the Convict’s stages has you running away from a giant, all-consuming worm. Regardless of which characters you’re playing as, however, you’re in for something zany, a fact which I can’t determine whether I’m more frustrated or impressed by, given how ridiculous some of the stages get.

Shoot for the Stars (or at least at Your Enemies) 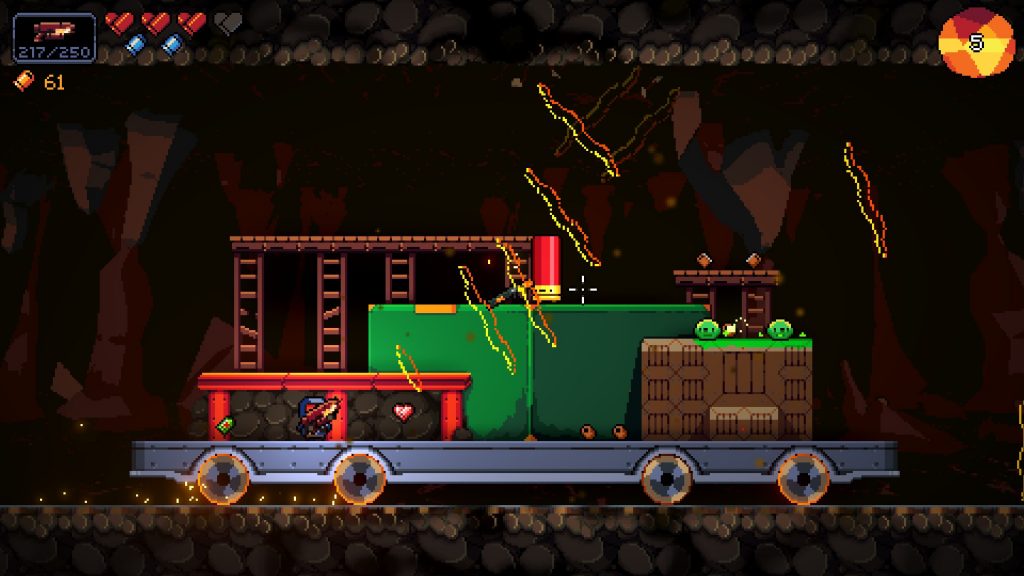 Enjoy each gun while you have it; you won’t for long!

Alright, enough elevator talk. Let’s head on over to the gun show, now, shall we? When it comes to combat, things are, despite it being a different genre, actually fairly similar. And, if you’ve any experience at all with Enter the Gungeon, then you’re probably not going to have too much difficulty figuring out how things work. As I’ve already said, this game is a platformer, rather than a top-down dungeon crawler, meaning that, this time around, players will move their characters across a two-dimensional plane. Exchanging shots with your gundead opponents is just as hectic as it’s ever been, however not much has changed aside from the fact that you can jump. Oh, wait, did I say “jump”? No, I’m sorry; it’s an “aerial dodge roll.” Yes, seriously. So long as you’re in the air, you’re dodging. That means that you can jump straight into enemy fire without getting hurt… unless you land. Unfortunately, conditioning yourself to accept that is rather hard. Most games don’t give you full invulnerability when you jump, meaning that, most likely, you’re going to end up trying to jump out of the way of bullets—only to get hurt by them on the way back down. But, hey, that’s more your fault than the game. Invincible jumps aside, however, things feel incredibly smooth—which is great, considering how hard this game gets.

Now, on to the actual guns. Honestly, almost every gun-related mechanic has been lifted straight from Enter the Gungeon and placed into this game… almost every mechanic. And that one missing mechanic is kind of a downer. So, to me, and I’m sure to most of you out there as well, a lot of what made Enter the Gungeon fun was collecting and building up your arsenal of guns. Saving ammo, swapping weapons around, freaking out when you found a perfect gun right when you need it… we’ve all been there. But, uh, Exit the Gungeon doesn’t have that. Instead, the game forcibly swaps out your current gun with another one every minute or so. And, on top of that, the pool that your weapon is drawn from is based on your combo count, which builds up as you shoot and avoid being shot. 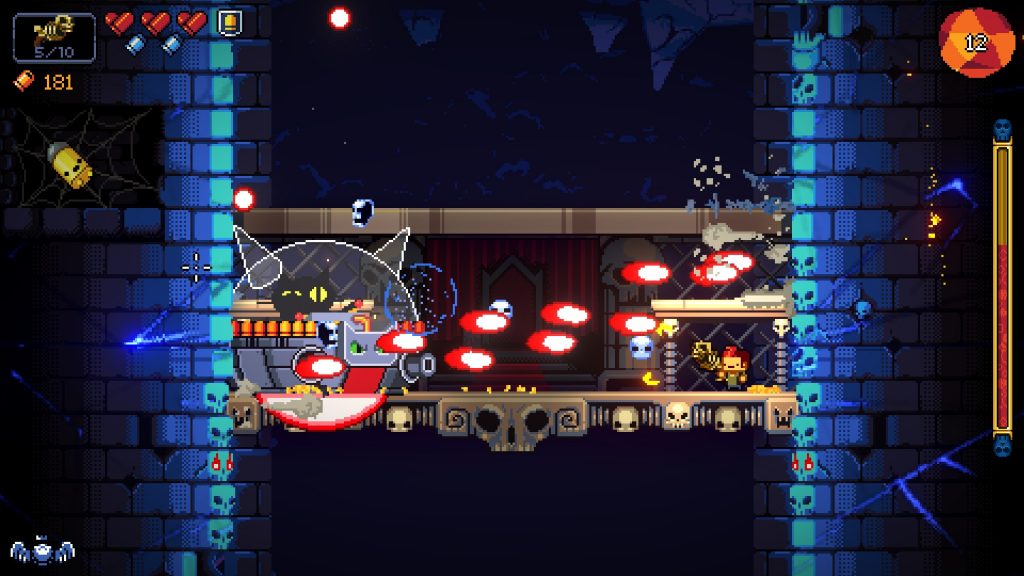 Now, fortunately, this isn’t nearly as detrimental in this game as it would have been in Enter the Gungeon. In fact, most of the time, it didn’t bother me at all. However, once the game started giving me slow and/or close-range guns in the middle of boss fights, I found myself getting (justifiably, in my opinion) a tad frustrated. I mean, this game’s RNG is already brutal enough—I don’t need it deciding to make boss fights harder mid-battle. Or ever. Truthfully, I’d love to have guns work as they did in Enter the Gungeon. But I’m also not sure that that would make things entirely fair. And, as I’m not a programmer, I’m not entirely sure what I’d do in this situation. But I do know that, as it currently stands, it’s not exactly my favorite thing in the world.

Let’s end by setting the record straight, because I’ve seen enough comments about this game already that I feel it necessary; Exit the Gungeon is not Enter the Gungeon. It literally says that it’s a “small, spin-off” in the Steam page description. Does that mean that it’s completely perfect? Definitely not; some of the levels are a bit too tricky for their own good, and the randomly changing gun mechanic can really hurt you if the game doesn’t play nice (which it often won’t). The devs seem to be very well aware of this, however, and seem to be actively making changes based on player feedback. And that fact, combined with how enjoyable the game already is, makes it a worthwhile pickup if you’re in the mood for something cheap (I’m mostly talking about price), challenging, and charming.

Full disclosure: This review is based on a PC review copy of Exit the Gungeon given to HeyPoorPlayer by the publisher