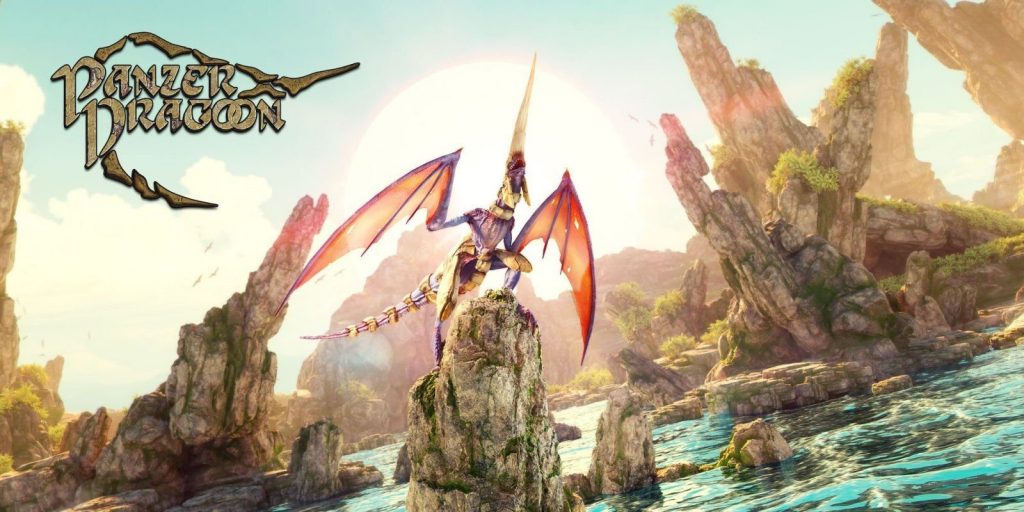 You’ll have to forgive me if I’m a bit of a mess right now. It’s been a crazy day. While just this morning, I was whipping up a story about veteran Panzer Dragoon composer Saori Kobayashi reprising her role for the Panzer Dragoon: Remake, Polish publisher Forever Entertainment decided to stealth launch the Switch version of the game during today’s Nintendo Direct Mini. Needless to say, today’s been a bit of a marathon, but I survived. Unlucky for the imperial armada and a massive prototype dragon, they can’t say the same. But them’s the breaks.

With SEGA’s Team Andromeda long gone, I have to admit I was a little bit cynical when I first heard an outside studio would be working on recreating Panzer Dragoon for the modern era. Anyone who has played the series since it first debuted on the Saturn knows it has a very distinct style, and I was worried some of the magic that made Panzer Dragoon so special would get lost in the process. Thankfully, I can say without a doubt that my fears were misplaced. Panzer Dragoon: Remake is a masterful retelling of SEGA’s cult classic Saturn launch game that remains as captivating today as it was when it first released 25 years ago.

Back in the Saddle. 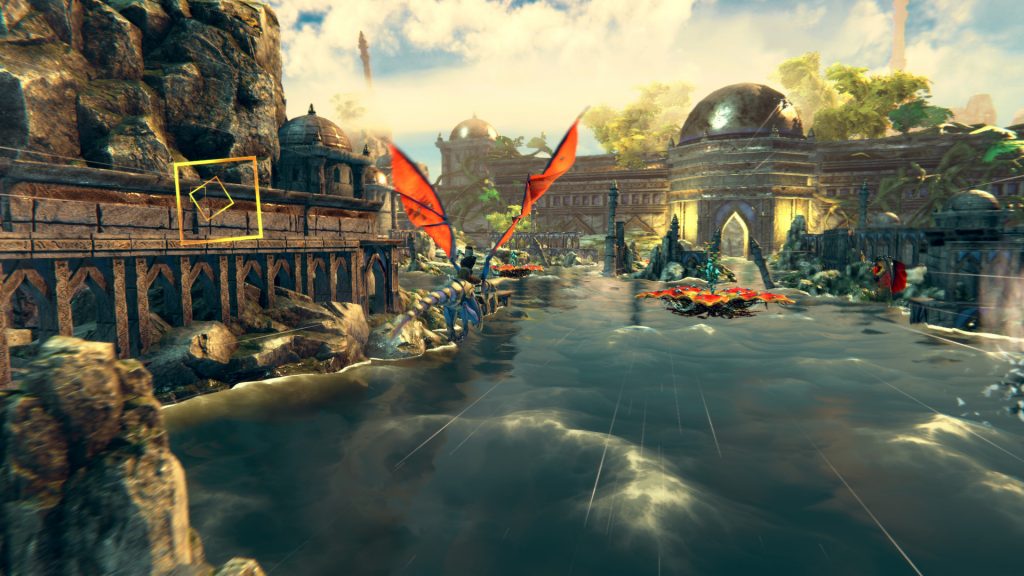 Panzer Dragoon: Remake’s revamped visuals are a sight to behold.

If you’re a fan of the original game, your jaw will probably be on the floor the first time you soar above the azure waters of the flooded ruins in Panzer Dragoon: Remake’s opening scene. Seeing the stage’s familiar crumbling turrets and aqueducts rendered in such striking detail is a real treat that underscores just how far gaming has come in the quarter-century since Panzer Dragoon first released. No longer forced to look at roughly hewn approximations of a submerged city, we can finally admire what the developers at Team Andromeda must have envisioned when conceptualizing the Saturn original, and the results are nothing short of breathtaking.

Some of Panzer Dragoon’s most iconic moments, like the harrowing sandworm chase set against a churching sea of dunes and the daring raid on a city in the middle of a raging storm, come across as much more impactful thanks to the game’s revamped visuals. The game’s creepy, biomechanical bosses, while massive and menacing before, look more formidable than ever this time around. Each features tons of little details that make them pop off the screen (well, save for the rather bland Flying Stronghold boss in the game’s fifth episode – but one out of seven ain’t bad).

That’s not to say that the updated graphics are the only reason to revisit the game, of course. But the boost in visual fidelity certainly helps pull you in like never before. It’s just a shame the game seems to cap at 30 frames per second on the Switch, even when docked, a problem which can be very noticeable during some of the game’s more frantic encounters. Still, it’s a marked improvement over what the Saturn delivered, but that should go without saying. Here’s hoping the upcoming Xbox One and PC versions of the game feature 60 FPS gameplay when they release this winter, as the game would, without a doubt, benefit from the added fluidity. 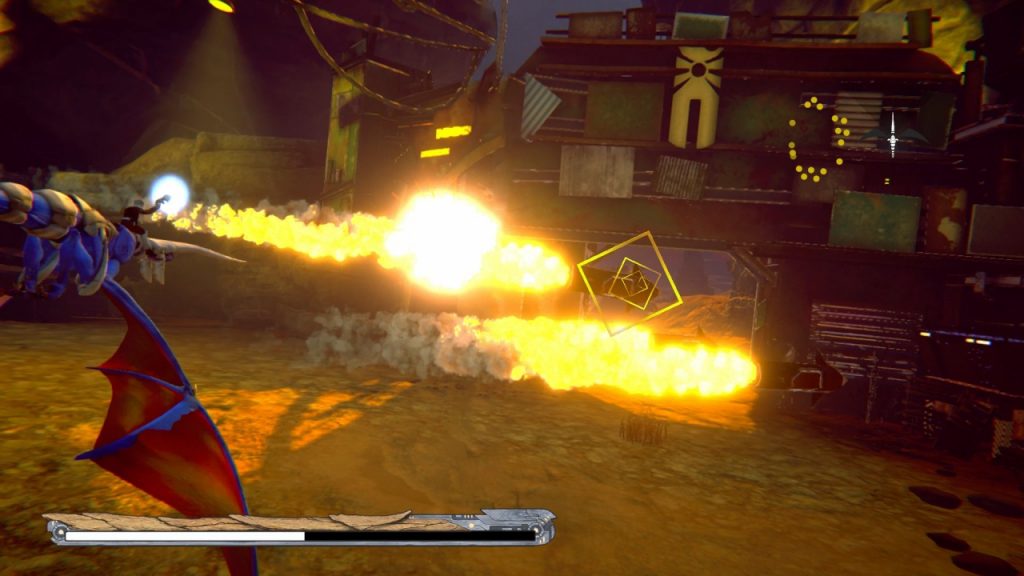 Through the fire and flames.

While the game’s visuals certainly needed a helping hand to make them suitable for the current generation, the game’s rock-solid shooting action is virtually unchanged from how it was in 1995. And you know what? That’s fine with me. Sure, the evolution system Team Andromeda added to the mix in Panzer Dragoon Zwei introduced some depth to the series’ on-rails action, but at its core, what’s on offer in Panzer Dragoon is still pure shooter bliss.

In case you’ve never played a Panzer Dragoon game before, here are the basics: The game is an on-rails shooter similar to the Star Fox series. However, while Nintendo’s space shooter sees you mostly battling enemies from a behind the back view of your ship, Panzer Dragoon instead lets you rotate 360 degrees in your saddle to target enemies, who advance from all around you.

While a bit tough to come to grips with at first, this quickly becomes one of the game’s most distinguishing features. Cautiously rotating from side to side as you hear bugs chittering all around you in a claustrophobic cave is genuinely unnerving. And having to quickly pivot from left to right as you fend of volleys of cannon fire from imperial airships is nothing short of exhilarating once you get used to the flow of the game. However, it’s worth noting that Panzer Dragoon: Remake can be a bit unforgiving to newcomers.

Fly For Your Life. 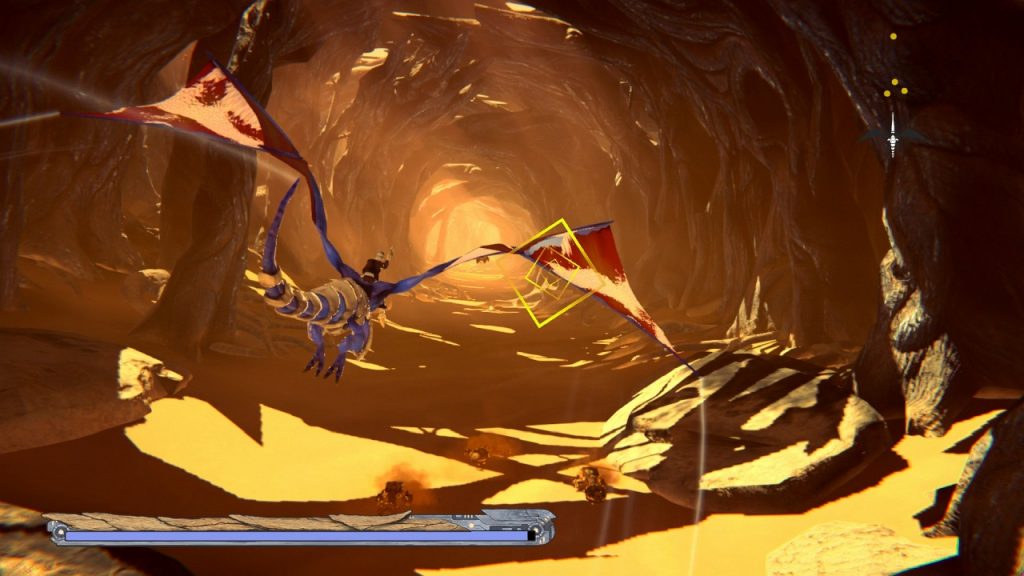 Enemies, like these chittering insects, will ambush you from every angle if you’re not careful.

Panzer Dragoon: Remake eases you in at first, allowing you to take in the scenic views while popping off volleys of laser blaster fire at your enemies. However, that quickly changes by the time you reach the game’s second level. Enemies begin to swarm you from all angles. And you’ll need to keep a close eye on your radar in the upper right-hand corner of the screen and prioritize your targets if you want to keep yourself in one piece. And let me tell you, staying alive can be quite tricky at times – especially when you consider the fact that there are no checkpoints and that the game only gives you one credit to start. Lose that credit, and it’s game over. Thankfully, you have plenty of chances to earn extra continues throughout the game based on how you perform.

At the end of each level, you can earn bonus credits based on your kill ratio. During my review period with the game, there were plenty of occasions when I found myself on the ropes with just one credit remaining but was able to earn a few more to keep me going after toppling the stage’s boss with a kill ratio in the upper 90s. With that in mind, it’s always good to use your homing laser. This ability is performed by holding down the fire button and highlighting enemies with your targeting reticle to lock onto them (much like the homing shot in SEGA’s other rail-shooter Rez) then releasing it to send a barrage of shots that can destroy entire waves of baddies. Using your lock-on attack strategically is paramount if you want to maintain a high kill ratio and thus, keep racking up those bonus credits to keep yourself going. 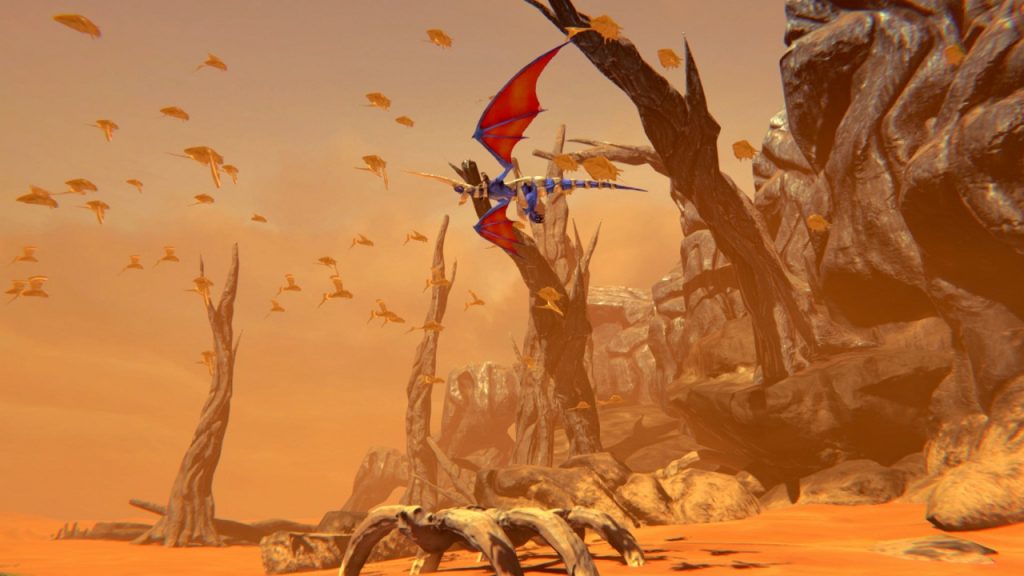 No time to take in the scenery, the skies are deadly.

On the aural front, Panzer Dragoon: Remake provides an incredible score to accompany the on-screen aerial action. Yoshitaka Azuma’s timeless synth compositions and sweeping arrangements were stunning when they debuted 25 years ago, and they still manage to pull the player into their rich and mysterious soundscapes that feel right at home in the game’s strange fantasy world.

Unfortunately, Panzer Dragoon: Remake’s sound effects fail to live up to the lofty heights of the game’s soundtrack. In stark contrast to Azuma’s warm orchestral melodies, the game’s sound effects are cold and tinny, which can be a bit distracting at times. Volleys of laser fire could be confused with the death rattle of a broken squirt gun, and the explosions are flat and muffled, which honestly makes destroying massive airships and dragons feel a bit less satisfying than it should. Still, with how spectacular the rest of Panzer Dragoon: Remake’s production values are, it’s pretty easy to overlook the game’s middling SFX.

While not perfect with its lackluster sounds and just passable framerate, Panzer Dragoon: Remake is about as close to a definitive version of SEGA’s cult classic Saturn shooter that fans could ask for on the Switch. With its gorgeous visuals and a superb soundtrack that’s aged like fine wine, MegaPixel Studios and Forever Entertainment have done an excellent job of modernizing one of the most memorable games of the 32-bit era.

Still, if you’re looking for something that will keep you busy for weeks on end, this probably isn’t the game for you. Panzer Dragoon: Remake’s seven levels are a blast while they last, but can be completed in about an hour on the standard difficulty. However, it’s worth noting that Hard Mode ratchets up the challenge substantially and will test the mettle of even the most seasoned dragon jockeys —  especially if you want to complete each stage with a 100% kill rating.

When all is said and done, If you’re a fan of the franchise who’s looking to party like it’s 1995, then, by all means, add this game to your Switch library. And if you’re a fan of arcade-style rail shooters who’s yet to see what all the fuss is about, there’s never been a better time to find out.

Now bring on that remake of Panzer Dragoon Zwei!