A Bundle For the Ages! 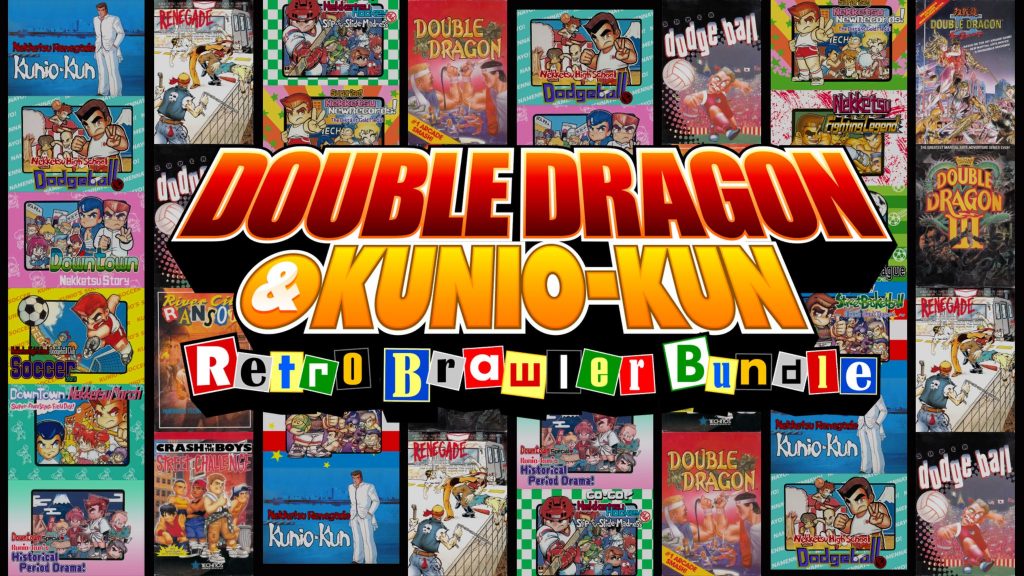 For NES gamers growing up in the eighties and nineties, the names Kunio and Ricki didn’t have much meaning. Alex and Ryan on the other hand…Those are the badasses from the game River City Ransom! Sam? That’s the dude with the awesome disc throw in the Super Dodgeball. Crash? Oh, he’s the high school athlete who humiliated Todd in the All-City Track Meet in Crash ‘N” the Boys: Street Challenge! Well, that last one was a bit obscure.

Now, head on over to Japan where kids grew up with a Famicom (Japan’s version of the NES), and you’ll find out that Kunio-Kun is one of the most badass video game characters of all time.  He was our Alex in River City Ransom. He’s our Sam in Super Dodgeball. And he’s our Crash in Crash’ N’ The Boys: Street Challenge! Kunio-kun is basically Japan’s high school version of Bart Simpson. Just a badass kid who likes to get into all sorts of trouble.

As the NES kids all grew older, they slowly began to realize through the internet who Kunio-Kun was. Dig deeper into the rabbit hole, and you’ll see that the Famicom received not just a few Kunio-Kun titles in its library, but a whole collection of games, which amounted to eleven titles! And that’s only on the Famicom. This isn’t even counting the games on the Gameboy, PC Engine, Super Famicom, and the arcades! Man, we had no idea what we were missing! Why Technos Japan decided to change the main protagonist for the NES games and not use Kunio isn’t really known. But here we are in the year 2020, and the Double Dragon & Kunio-kun: Retro Brawler Bundle is here to show us what we’ve been missing out on. 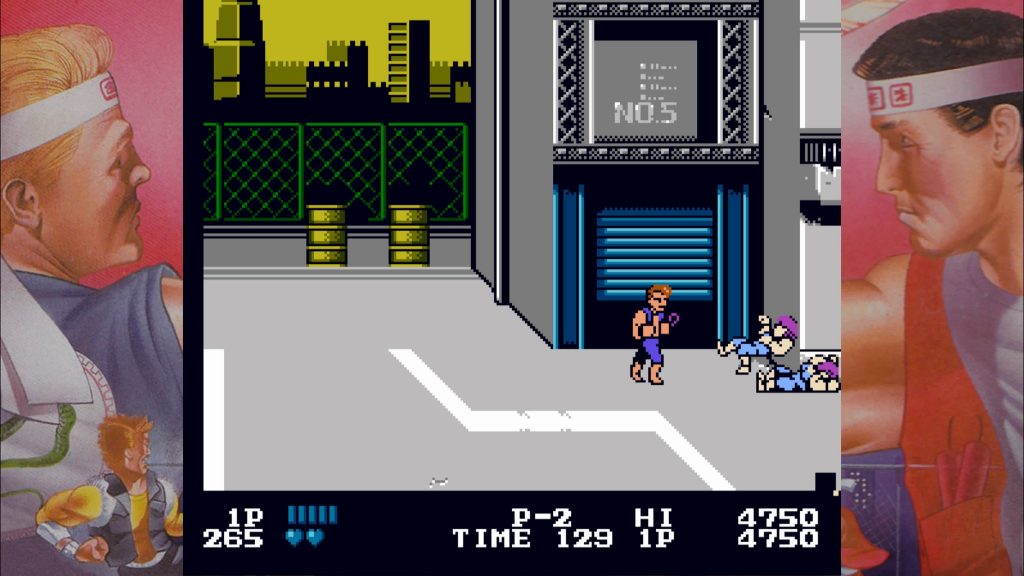 Don’t forget! The Double Dragon Trilogy is in this bundle too!

The Double Dragon & Kunio-kun: Retro Brawler Bundle is a collection of 18 titles that includes all of the Famicom Kunio-kun games, the Double Dragon Trilogy, and the Kunio-kun-less Nintendo versions of the Famicom games. That’s a whole lot of games to digest! You’ll be scoring goals in games that have never made their way stateside. We’re talking Nekketsu High School Dodgeball Club – Soccer Story,Go-Go! Nekketsu Hockey Club Slip-and-Slide Madness, and Nekketsu! Street Basketball All-Out Dunk Heroes. Tired of sports? We’ll fire up Nekketsu Fighting Legend, Downtown Nekketsu Story, or one of the classics from the Double Dragon Trilogy, and punch in some faces.

Fans of the Kunio-kun series have probably dabbled in some ROMs of the games that never made their way to the NES.  Unfortunately, firing up these ROMs in an emulator won’t magically translate the game for you. Well, the Double Dragon & Kunio-kun: Retro Brawler Bundle has got you covered.  For the first time ever, each and every game in the whole Famicom Kunio-kun collection has received an official English translation for this release. This is a godsend because these games have some really amazing storylines and are full of charm and humor. Now you’ll finally find out why you keep slaughtering the CPU in the first game of Slip-and-Slide Madness. If you’re a Kunio-kun fan and this doesn’t make you happy, nothing will! 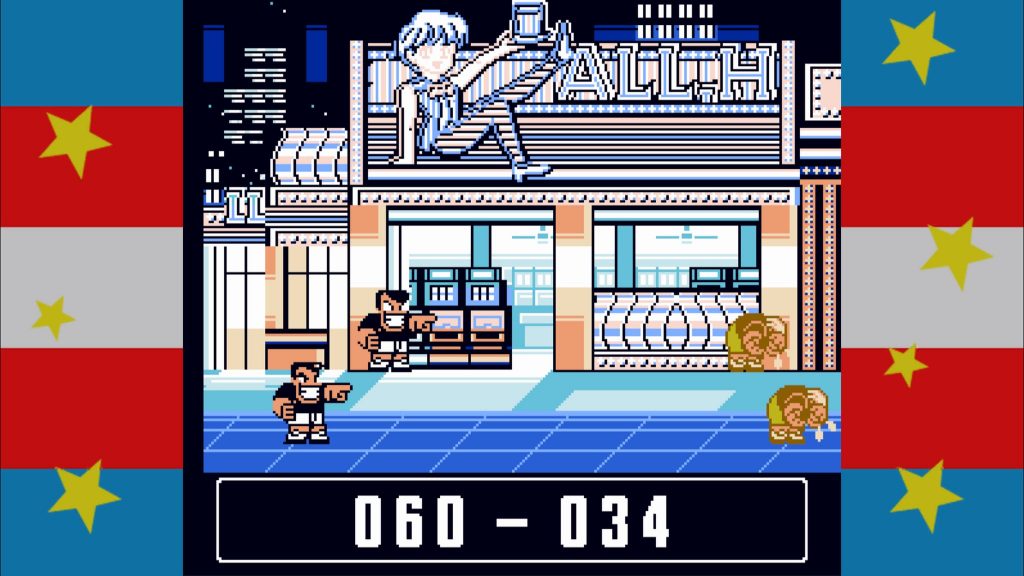 Gamers that have experienced the NES and SNES mini’s menu system will feel right at home navigating the Double Dragon & Kunio-kun Retro Brawler Bundle. The bundle’s interface is almost an exact replica of Nintendo’s mini consoles. It’s extremely clean and satisfying to navigate. Each game get’s it’s own description, and games that feature a story get a nicely-written synopsis.

While in-game, a quick press of the options button (PS4) will bring you to the in-game menu.  Here you can view the game’s controls and manual. It’s worth noting that players can also change up the controls to their liking. Each game features save states (4 per game) and utilizing the save state feature feels VERY similar to the mini console’s interface. The menu system is beautiful and I hope other developers take note. Don’t be afraid to use Nintendo’s template, because it’s perfect.

Japanese Kids Were So Lucky! 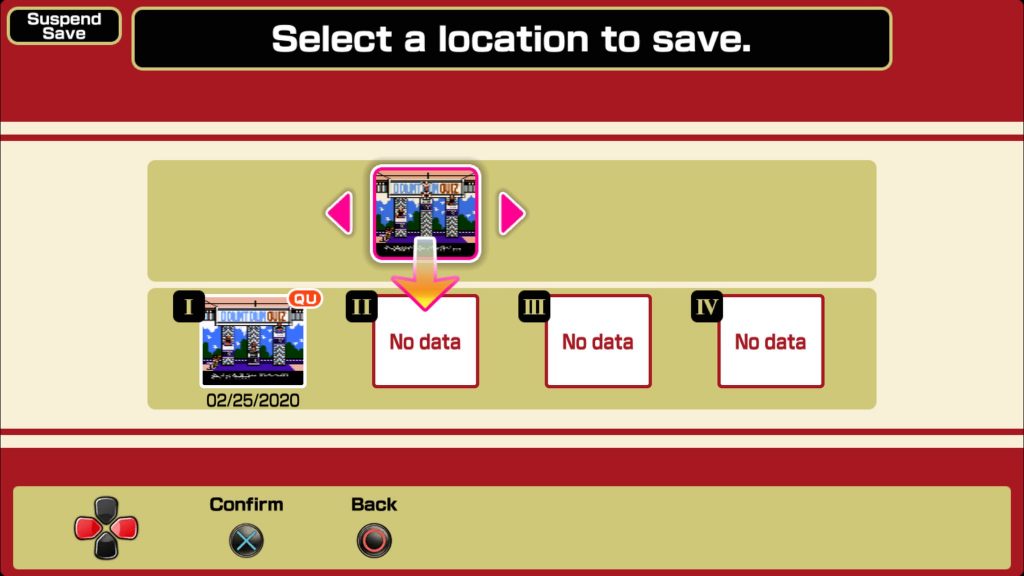 The menu interface is very similar to some Nintendo Mini consoles.

Similar to most retro bundles that you’ll see today, the standard visual options are all here. 4:3, stretched, and pixel perfect aspect ratios are all available. Also included is a scanlines feature, which contains a scale that adjusts how noticeable the scanlines are. Gamers who love to play with the game’s audio will also have a lot to fiddle with, as there are a ton of options to explore. Want to change up the games reverb? Treble? Bass? If you’re an audiophile, then get ready to be amazed. 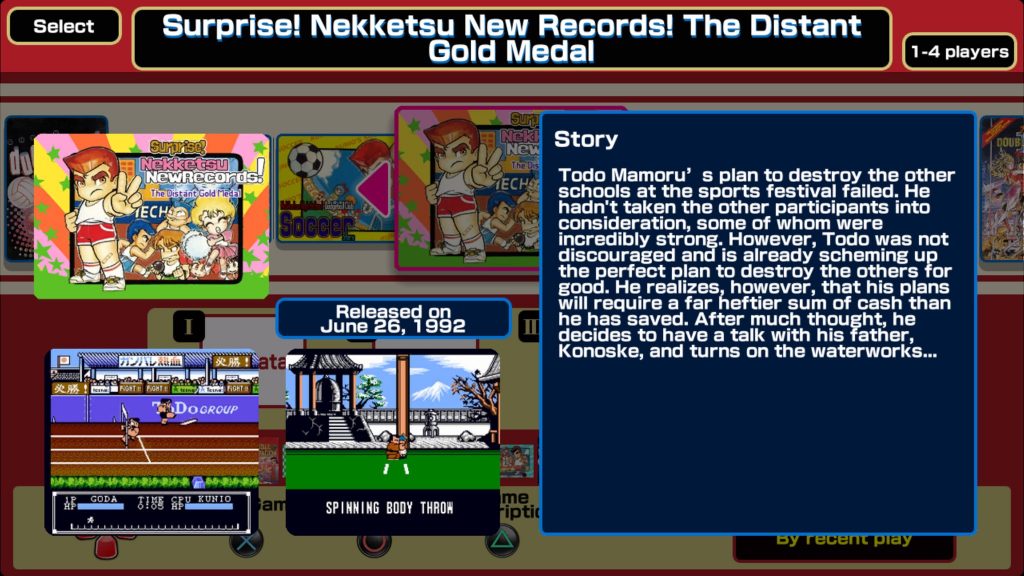 Now that everything is in English, it all makes sense.

Most games in this bundle are of the multiplayer variety. It is worth noting that there is an online game option, but we were unable to find a room or find any players after we created a room of our own. This is highly disappointing, but we hope that this is simply because the game is fairly new, and not many players have had the chance to purchase it yet.

If you’re a Kunio-kun or Double Dragon fan, or both, then this is the bundle you’ve been waiting so long for. This is the game that I personally would take with me if I were going to be stranded on a deserted island. Everything about this bundle is perfect. So dust off those knuckles and prepare your Dragon Feet, because Kunio-kun is now officially stateside!

Editor’s note: This review is based on a review copy of  Double Dragon & Kunio-Kun: Retro Brawler Bundle provided by the publisher.

Cows, spaceships, and poetry.   I’ve never been able to make up my mind about whether or not I enjoy point-and-click adventure games. The real, true-blue classics (the cream…