Gather under the Night once more. 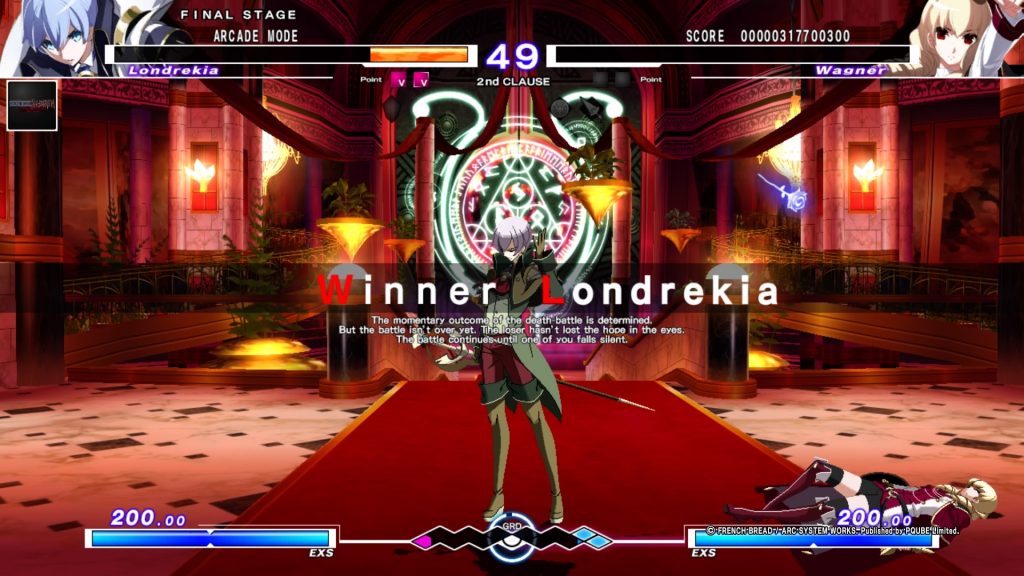 I think it’s safe to say Londrekia has one of the best win animations in the game.

Under Night In-Birth is a fighting game that has seen a meteoric rise in the west over the last couple of years. After starting as an arcade game in Japan in 2012, a revision of the game called Under Night In-Birth Exe:Late (UNIEL) came to consoles in Japan in 2014, making its way overseas in 2015. A second major revision, called Under Night In-Birth Exe:Late[st] (UNIST), came to consoles in 2017, with a worldwide release in 2018 and a PC version later that year. It was with this version that it really found serious popularity in the west, possibly bolstered by characters from the game appearing in the hotly-anticipated BlazBlue Cross Tag Battle, with UNIST players heavily pushing the game online leading to some of the largest tournaments for the game to date and the game even being featured as a main game at EVO the following year. It then that developer French-Bread announced another major revision for the game, titled Under Night In-Birth Exe:Late[cl-r] (UNICLR), teasing a simultaneous worldwide release for the first time in the series’ history, a host of balance changes, and a new playable character. 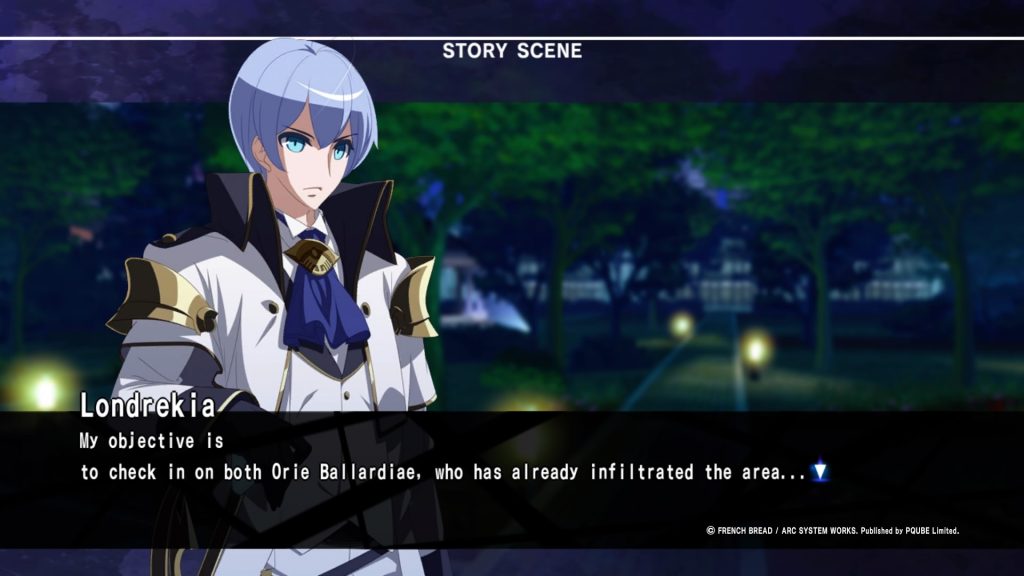 Glad to see some of the localization errors seem to have made their way into this version.

For those unfamiliar with Under Night In-Birth, it is a fighting game developed by French-Bread, the developer behind other games such as Melty Blood and Dengeki Bunko Fighting Climax. There are now 21 playable characters, with UNICLR adding Londrekia Light to the roster. The playstyle is relatively grounded, compared to many other anime fighters such as BlazBlue, Arcana Heart, or even Melty Blood itself, with no way to block most grounded attacks while in the air and somewhat limited air mobility. The most significant unique mechanic in the series is the GRD system, which is an ongoing tug-of-war between the players throughout the rounds, where players are rewarded for active play and good offense and defense, and punished for playing passively. Every 17 seconds, whoever has more GRD meter is rewarded with Vorpal state, giving them a minor character-specific bonus, a small damage boost, and access to several powerful tools such as Chain Shift and Cross-Cast Veil Off (CVO).

Most of the system in UNICLR is relatively unchanged from UNIST, mostly coming with a small number of minor tweaks and nothing major like UNIST’s addition of CVO. The biggest changes are all balance modifications to the characters themselves, including new moves for much of the cast. Unfortunately, I’m not experienced enough with the majority of the characters to know about much beyond the new moves just from trying them here. Still, for the characters that I’m familiar with, the changes were significant. The other big difference is the addition of Londrekia, the single new playable character. I haven’t had much opportunity to properly learn how to play him, since chances to play him against other people have been limited. Still, from what I’ve played he’s a lot of fun, and I look forward to having chances to actually learn how to play him as a new main. 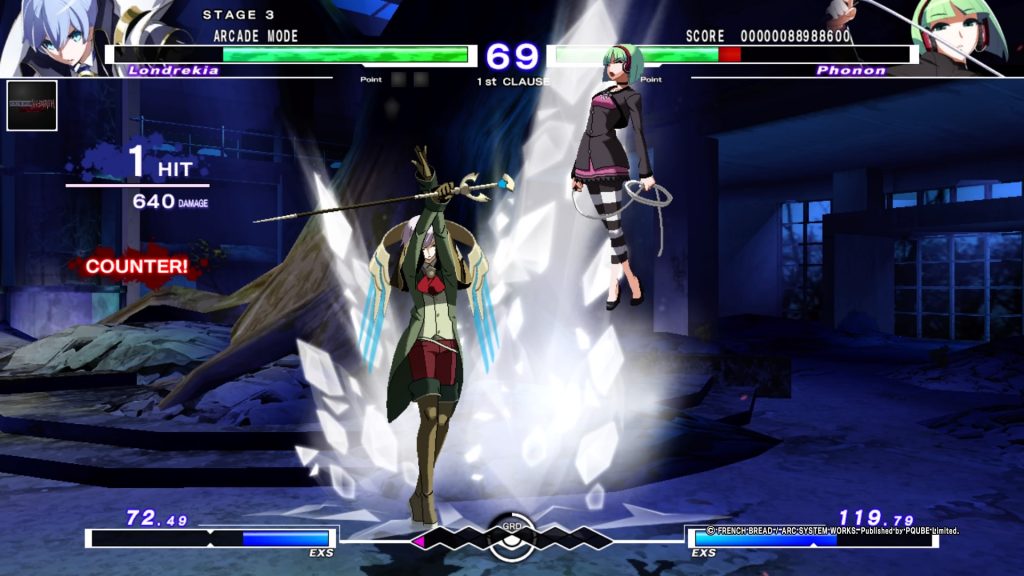 Londrekia’s effects are some of the best-looking in the game.

Outside of the gameplay, not much has been changed aside from aesthetic changes to the menus. One very nice quality of life change is the ability to change controls from the character select screen, which previously could only be done from the main menu options screen or by pausing before the start of a round. It’s a change that matters a lot for tournament play, making preparations for a set much easier and more streamlined, and bringing it in line with most other commonly-played modern fighting games. One thing that unfortunately stayed the same is the game locking up if a controller gets disconnected on the versus mode results screen, only being controllable again if both controllers are reconnected. It was a problem in UNIST, and I was hoping it would be fixed in UNICLR as it is in other fighting games, but the problem is still there. The netcode seems to be mostly the same delay-based code as was used in UNIST, which is questionable at best when playing anyone outside your local area. It at least shows on-screen how many frames of delay there are, but the more-reliable rollback-based netcode (especially the fantastic GGPO) should be made the industry standard for fighting games.

Aside from that, the only other new elements are a single new stage, Londrekia’s theme, an extra Londrekia vs. Wagner theme, and the ability to play the vocal opening themes from UNIST and UNICLR, respectively titled “Unknown Actor” and “False Infinite Parallel,” in combat. There’s no new episode to Chronicle mode for Londrekia, and no other new elements that I am aware of aside from new combo trials to reflect some of the changes to the characters. The new content is very slim, but it’s somewhat understandable considering UNICLR is available to owners of UNIST on PS4 as a free patch combined with DLC. As much as I like Londrekia, whether or not you pick it up depends entirely on how much you want to play him.

Under Night In-Birth Exe:Late[cl-r] is much the same as the previous entries, but with the balance shaken up and a new character to mix things up even more. As a fan of Under Night In-Birth myself, I was looking forward to this new entry, and it delivered more or less what I expected from it. I would ordinarily say any fans of the previous entries will likely enjoy this, but given that if you own UNIST on PS4, you’ll be getting updated to the new version whether you want it or not, there’s not much else to be said there. If you haven’t gotten into the series yet, I highly recommend Under Night In-Birth Exe:Late[cl-r], and now is a good time to get into it, being at the peak of its popularity with featured brackets at many major tournaments around the world and a fairly large player population, and it’s definitely worth the $39.99 USD if you don’t own it already or you want it on Switch.

Full disclosure: This review is based on a PS4 copy of Under Night In-Birth Exe: Late[cl-r] given to Hey Poor Player by the publisher.