Benny visits NISA’s offices in Los Angeles to get an early taste of the upcoming remake of Masaya’s classic Mega Drive RPGs, Langrisser 1 & 2.

Today we’ve got something special for you. A hands-on with the first two stages of the Steam version of Langrisser I from the upcoming Langrisser I & II. In fact, we’re throwing up both a commentated and non-commentated version for you all. So, if you just want to listen to the awesome soundtrack, we got you covered.

For those of you who want to know a bit about the specs of the gaming rig that we were playing on, here’s they are:

If you’re wondering why the video is at 720P despite those awesome specs, that’s because of a setting error in OBS on my part. My apologies for that. As for my thoughts on the game and build itself?

Well, for one I’m quite impressed with how smooth everything felt to me. I’m not a big PC-gamer, but this felt indistinguishable from a console to me. While I have the Switch version on preorder personally, I may end up picking the Steam version at some point just to grind for the achievements. Gameplay-wise, I see a lot of potential.

As last year’s Super Robot Wars T can attest, I love turn-based strategy games! While I never had Warsong (the original Genesis/Mega Drive release of Langrisser I), I can already tell I missed out on something special. The soundtrack alone is just amazing, and I’ve only played two stages. There’s just something about that SEGA Synth that gets your blood pumping. That said, the remastered soundtrack is worth a listen as well. While I prefer the original soundtrack a bit more, that’s also the old-school gamer in me coming through. As for the gameplay? Lots of possibilities.

Langrisser I may have come out in 1991 originally, but for its time, it feels pretty in-depth. From having your character’s stats be determined from answering questions at the beginning. To hiring mercenaries to fill out your ranks. To even having a magic system, there’s a lot you can do here. Sure, this is a remake of an almost 20-year old game, but I can already start to see why this series went on for several more games. I’m eager to give this one a shot.

If you want to try it out for yourself, then check out the demo coming to the Nintendo eShop and PlayStation Store on Thursday, February 20th. Sadly, no Steam demo will be available. Though, if you want more Langrisser then consider taking part in NIS America’s Trial of Morality which can have you winning some very cool stuff:

Finally, I’d like to thank NIS America and their PR rep, Laura, for inviting us to their HQ to demo this awesome title. Be sure to keep it tuned to Hey Poor Player though since Langrisser I & II weren’t the only games we played while there. 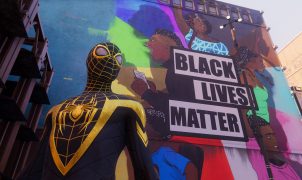