“Get outta the way!” 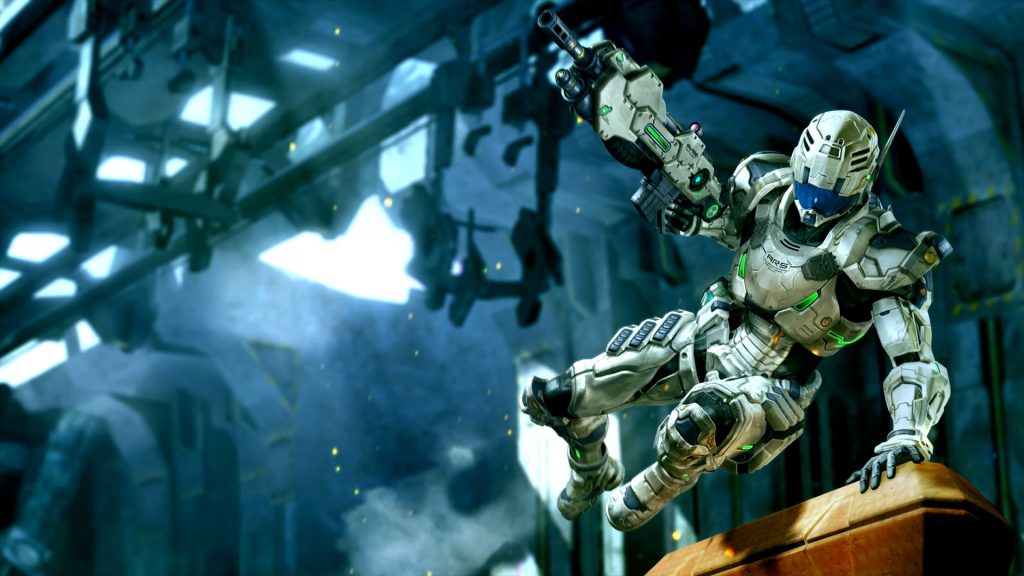 Like Bayonetta, there have been very few titles like Vanquish in the last ten years. Those dedicated to PlatinumGames-developed entities could only praise its frantic yet exhilarating action, impressive boss fights, even knee-sliding. And they were right; Vanquish is an excellent fast-paced, super stylish shooter in the third person, from Resident Evil ­creator Shinji Mikami. Both this and Hideki Kamiya’s Vanquish are being bundled together (physical release anyway), and both remain shining examples of PlatinumGames’ glamour and glory.

Vanquish puts the gravelly-sounding Sam Gideon at the forefront of a Russian-led robot war on America. Donned in his ARS (Augmented Reaction Suit), Sam can shoot, run, roll, and even knee-slide. That last function, performed by holding L1, shoots Sam across the floor at a breakneck pace to evade gunfire or get behind enemy lines. It’s an excellent defining feature that allows manipulation of your speed of attack, or a change of tactic. It also ties in with the suit’s AR mode, which allows the slowing down of time to make more pinpoint attacks. All consume a meter that, if depleted fully, the suit must recharge. The dynamic here is that these are all managed by you, except for when you take critical hits, which instantly depletes the meter, triggering AR mode automatically. 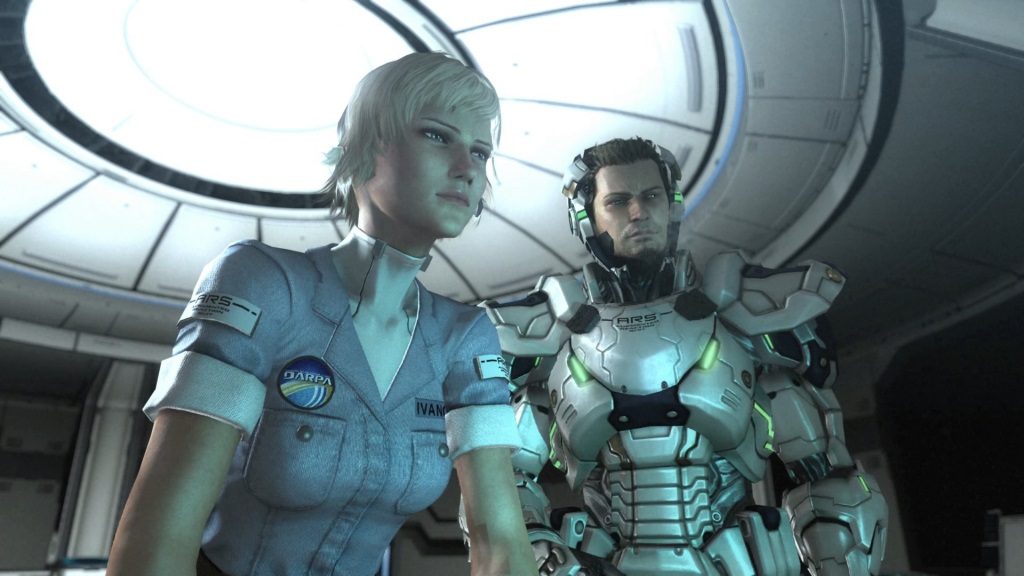 In amongst the herds of red Russian robots are plenty of boss fights. They vary from flying super-suited humans to the gigantic Argus, each requiring different tactics to expose their core and destroy them. It’s simplistic in nature but spectacular in practice. There are corridor stages, elevator stages, sniper stages, and most exciting of all are the battleground stages. Finding yourself pinned behind barricades, waiting for that perfect moment to strike. Thanks to the suit’s BLADE system, three weapon types at a time can be stored. A quick tap of the relevant D-pad direction changes to the desired weapon, and any can be swapped out for others throughout. Vanquish’s mechanisms are designed to keep you thinking, and that means quickly. It serves as a constant adrenaline rush.

Ten years on, why should anyone care about Vanquish? Its biggest problem was always recognition, not its quality. Critics loved it, and according to Wikipedia, its more recent PC release pushed it over the 1 million sales mark. Yet it somehow feels like a forgotten gem in many respects. Bayonetta is undoubtedly far more well known (a sequel and SMASH appearance would have a lot to do with that), but Vanquish, although quite different, is cut from a similar cloth. Having them release at the same time makes perfect sense, as they complement each other so well.

“Time to hit hard and make ’em regret it.” 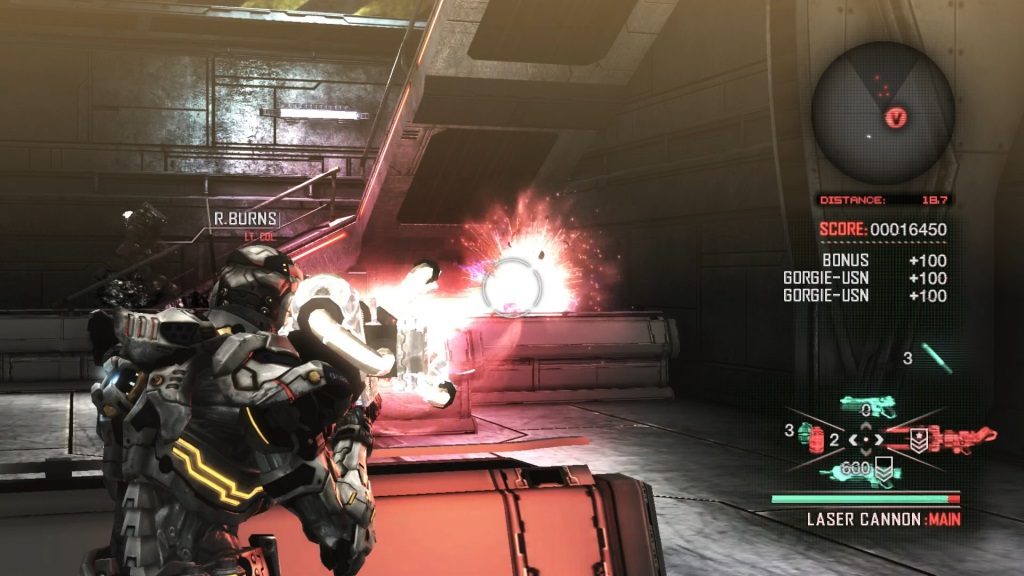 And so, what about the remaster? The 4K, 60 frames per second upgrade provides a facelift for the current generation to have a swing at. Vanquish always had a distinctly futurism feel and clear visuals, but now they run superbly fast. The frame rate boost gives the action a new lease of life and has never been better. The ARS looks better than ever also, with extra detail evidently on show for key characters to bring them more up to date. Unfortunately, the upgrade can do little for the backdrops, which were of the time already. Some look a bit blurry with Vanquish having an awful lot of greyness about it anyway. As noted in the preview, there are noted small moments of slowdown in some of the cutscenes. There was a patch released earlier today, so fingers crossed both this, and the subtitle inconsistencies are also addressed. 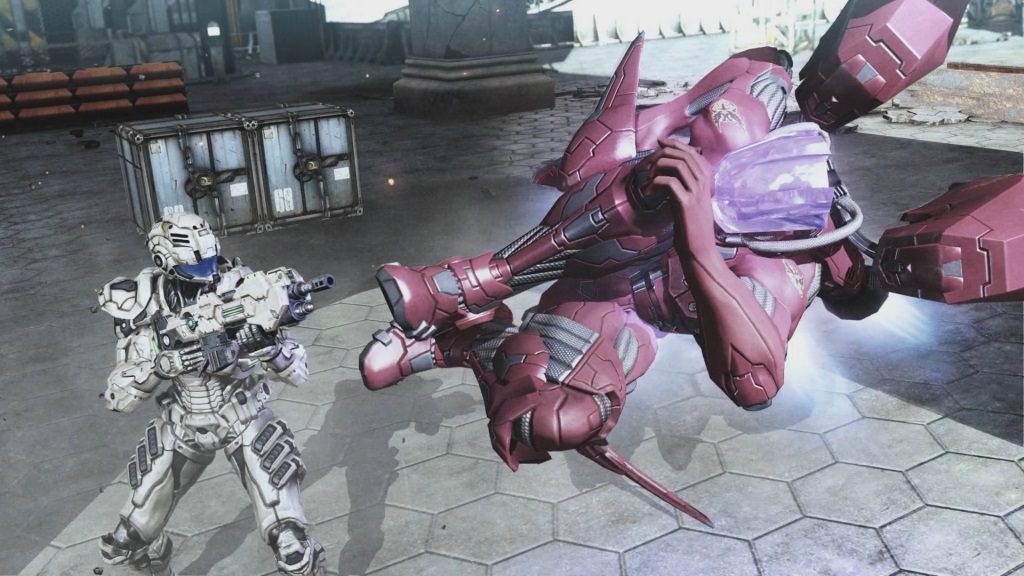 So, Vanquish is starting to show some age a little. What of it? When the action is as good as this (and it is as good as they come), it’s perfect for a few hours of frenetic fun. Therein lies its biggest flaw: the campaign’s length. Even a first-timer could wade through on the Normal setting in but a few hours. But that in itself is part of the genius of Vanquish; the mechanics are so tight and easy to learn, you’ll soon be clocking headshots in AR mode as if you’ve played for months. Like many games from PlatinumGames, they are often designed to be replayed. For the trophy hunter, there are plenty of fun-to-obtain trophies to collect, which also require a rise in difficulty. The challenge mode becomes exceptionally hard and is still the elusive trophy I am yet to obtain myself on any version.

If Bayonetta is the coveted supermodel, then Vanquish is the young starlet that never got the break they deserved. The story may be a tongue-in-cheek, politically preposterous, and filled with corny dialogue, but that’s all part of the fun. You don’t need to believe it to enjoy it. But what needs to be believed that even with a single playthrough, you cannot go wrong for a few hours of entertainment than with Vanquish.

Full disclosure: This review is based on a PS4 review copy of Vanquish given to HeyPoorPlayer by the publisher.