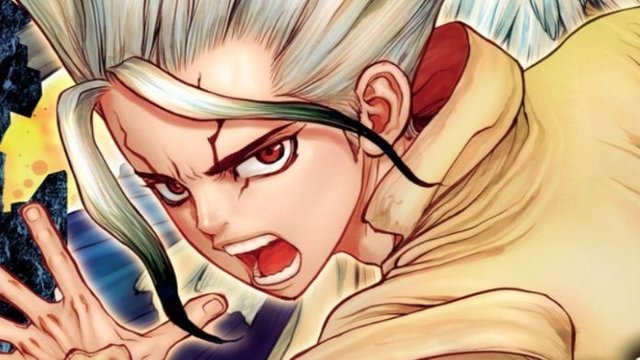 When Taiju marches triumphantly into the Kingdom of Science’s encampment — and by association, back into Senku’s life — we shudder not at the fear his one-track mind could drag Riichiro Inagaki’s Dr. Stone down yet again; nay, we shiver at how, against all odds, we’re actually heartened at this reunion with Senku’s old friends. As I’ve mentioned maybe a million times now, let’s not forget how Taiju and Yuzuriha — indistinguishable tropes alike in muscle-head optimism and being the staple girl — were poor complements to Senku’s poindexter brains, and were unquestionably why the series stumbled out the gate the way it did. But our soft reboot in Ishigami Village and its inquisitive inhabitants in Chrome, Kohaku and the rest has forged a relentless momentum skyrocketing Dr. Stone into one of Shonen Jump’s finest, and so the two modern outcasts are welcomed back with open arms — their newfound purpose (or not so new, what with a certain foreshadowed development we’ll dive into later) and reciprocal functions and dynamics effortlessly weaved into their new circle.

And on the eve of the Stone Wars, no less! Senku’s Kingdom of Science is finally ready to make their move against the Tsukasa Empire; that being, naturally, recovering the Miracle Cave and its nature-born antidote for humanity’s stony malady. From front to back, Volume 11 of Dr. Stone is a tense exercise in cat-and-mouse (Chrome’s clever escape from prison), a tense battle with everything at stake (capture the Miracle Cave, which contains humanity’s last hope), and a dirty backstabbing of a cliffhanger leading into the next installment, confidently seguing from one plot beat to the next. That Dr. Stone effortlessly juggles two flawed leads back into the fray means we no longer have anything to fear: Inagaki’s firmly on the tracks he’s aimed for all along, and we can sit back and relax knowing Dr. Stone‘s in good hands.

Not that Volume 11 does this right away, of course — our Stone World science representative in Chrome finds himself in a tricky predicament: breaking free from Tsukasa’s clutches. Armed with only scientific knowledge and with an eccentric watchmen watching his every move (Yo Uei: a “shoot first, ask questions later” cop from the olden (modern?) days; wait, wouldn’t reviving him go against Tsukasa’s ideals…?), it’ll take everything our budding scientist’s learned under Senku’s wing to successfully escape. This two-chapter highlight on Chrome’s a vindicating romp — true, this isn’t the first time his brand of science outwitted the opposition, but it’s certainly a first in that he’s succeeded on his own (lest we forget his firey tricks may’ve not triumphed over Magma’s brawns without Gen’s theatrical “magic”). That he’s working parallel on Senku’s own cellulose-breakdown solution isn’t just a compelling case for him coming into his own; nay, it’s a foreshadowing for the upcoming battle between brainy science and raw strength.

But let’s not forget what hinges upon this upcoming battle; namely, the miracle cure. Ukyo’s surprise betrayal may come with a strict stipulation (don’t kill anyone? Yeah, sure, Senku’s got it), but it’s his reason for doing so that shocks both him and reader alike: Yuzuriha’s secret mission of stitching Tsukasa’s broken human statues back together. From the beginning, we know Dr. Stone‘s altruism would extend to both innocents and criminals alike, yet it’s Senku’s dedication within this deadly clash of ideals that ultimately wins over Ukyo. Does it violate our suspension of disbelief? Sure, but whatever — for all of Dr. Stone‘s passion for science, from day one we already accepted how Senku’s three-millennia counting deviated not one inch from the series’s superhuman peers, and so we accept this development on the grounds of feel-good manga magic. (Admittedly, for all my praise earlier, Yuzuriha herself still isn’t that interesting, but at least her role here finally renders her relevant.) 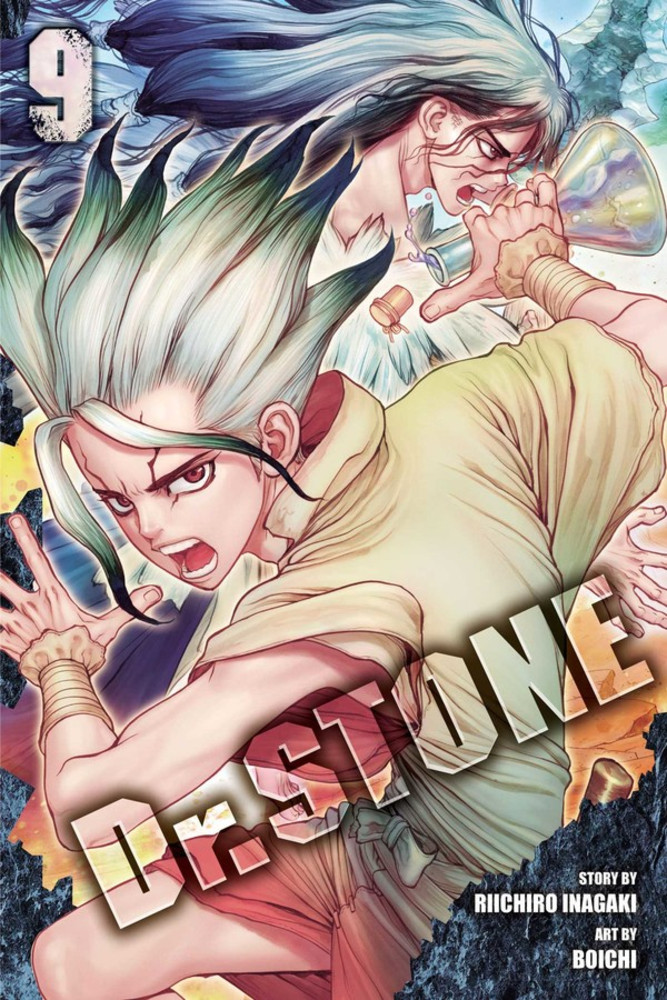 Of course, the Stone Wars is the star of this volume; for those expecting a multi-volume drag, you have nothing to fear, for Inagaki wisely condenses the focus into securing the Miracle Cave rather than, say, padding the action out with individual one-on-one fights and background strategics. Our first act is cleverly compressed into a concise twenty-second battle, with Inagaki’s clever-storyboarding framing every page counting as a separate moment and Boichi’s dense energy dressing every panel with the minutiae of battle. Not that the battle’s over that quickly; if anything, the Herculean duo of Tsukasa and Hyoga joining the fight at the worst possible moment may spell doom for humanity…

Or does it? As Senku points out, this confrontation won’t end the same way it did back in Volume 2 — no longer does mankind’s hopes and dreams lay on the hands on three ragtag teenagers, but the heartened reassurance of combat-primed primitives, sneaky strategists, and worshipful rock-star enthusiasts spanning across millennia. Truly, this battle began long ago not through Senku’s encased tallying, but in his father’s insurance act thousands of years back; indeed, only through their combined efforts could science win the day with a true miracle: coating something as flimsy and feeble as a paper airplane into a destructive force of nature.

Alas, things aren’t over just yet — while it’s through Senku’s latent benevolence towards even his own enemies that this war cools down with Tsukasa’s redemption in reviving his sister, Ukyo’s prediction of the Tsukasa Empire’s shaky leadership sadly proves true. How this’ll end will surely cast a curtain down on this arc, but we’ll analyze all that in the next volume; for now, merely observe how this volume’s an expertly compact showcase of Dr. Stone’s fluid concoction of action and smarts: nine consecutive bouts of thought-provoking edutainment ceaselessly engaging in serialized format.