This Ain’t no Fantasy; it’s Reality. 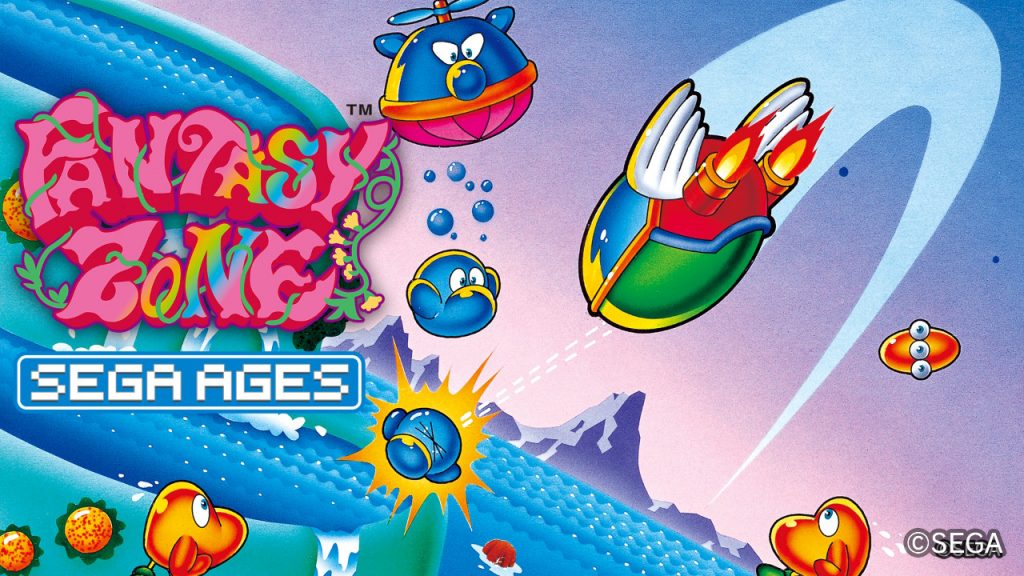 We all remember Opa-Opa, right? You know, the flying spaceship with legs? SEGA’s first mascot? Debuted in Fantasy Zone? I’m sure that plenty of you do. But if you don’t, there’s no need to worry—despite being the first video game mascot that the company had, SEGA soon saw to it to knock him down from his throne with the help of a certain blue hedgehog. So, yeah, our little winged spaceship boy here has been fairly obscure for about 30 or so years now. But all of that’s about to change because we’re finally getting a… well, it’s just a re-release of the original Fantasy Zone with a few bells and whistles added. So maybe not that much is changing. But, hey, SEGA AGES Fantasy Zone is still pretty neat if you’re in the market for a short, goofy arcade game with a surprisingly sobering ending.

Opa-Opa Style (Sorry, that was Dated and Bad) 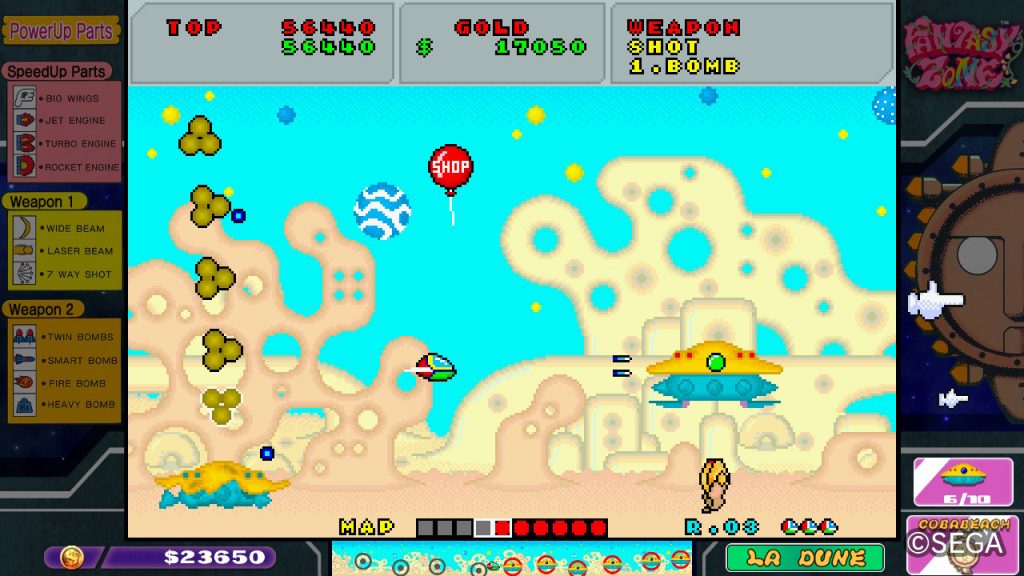 Don’t worry; I don’t really know what I’m looking at, either.

Given that the game came out in 1985, I’m sure that most of you know how (SEGA AGES) Fantasy Zone works. But, for the uninitiated (no shame, by the way), allow me to enlighten you. Fantasy Zone is a short, side-scrolling shooter with a simple premise permeating throughout each of its levels: destroy the enemy ships, take down the boss, and try not to die. Sounds pretty unoriginal, right? Well, not so much. Year of initial debut aside, Fantasy Zone even now carries with it some things that help it to stand out from the crowd. For starters, there’s how the game itself works. Rather than being an auto-scroller or affixing the player to a specific vertical or horizontal plane, each level within Fantasy Zone is actually its own world. And, tiny though those worlds may be, they’re still enough to help label the game a side-scroller (in part) in its own right. Until you defeat each of the main ships floating around, you’re stuck in that level. This style of progression was—and still is, to some extent—highly unique for a ship-based shoot-’em-up, and, while its age definitely shows at this point, Fantasy Zone is still a lot of fun in its own right. Just be ready to get gud or quickly and repeatedly die trying. …Or, uh, use the save/load features.

Another unique thing about Fantasy Zone is just how much important it places on money. From the player needing to collect coins to buy items, build up coin stock—a SEGA AGES-exclusive feature which allows players to save up money and use it for subsequent plays—and unlock features (another SEGA AGES-exclusive), to the fact that half of the game’s story is about the planet’s money being stolen, the almighty dollar (or Fantasy Zone-equivalent) is very important here. How, you ask? Well, aside from everything that I just listed, it lets you buy power-ups! Bigger guns, better bombs, faster wings (or jets); you name it, and you can buy it (within reason, of course). Just be sure that you’re confident in your abilities, though; one touch from an enemy is all it takes to destroy Opa-Opa and every single trinket he’s got on him. 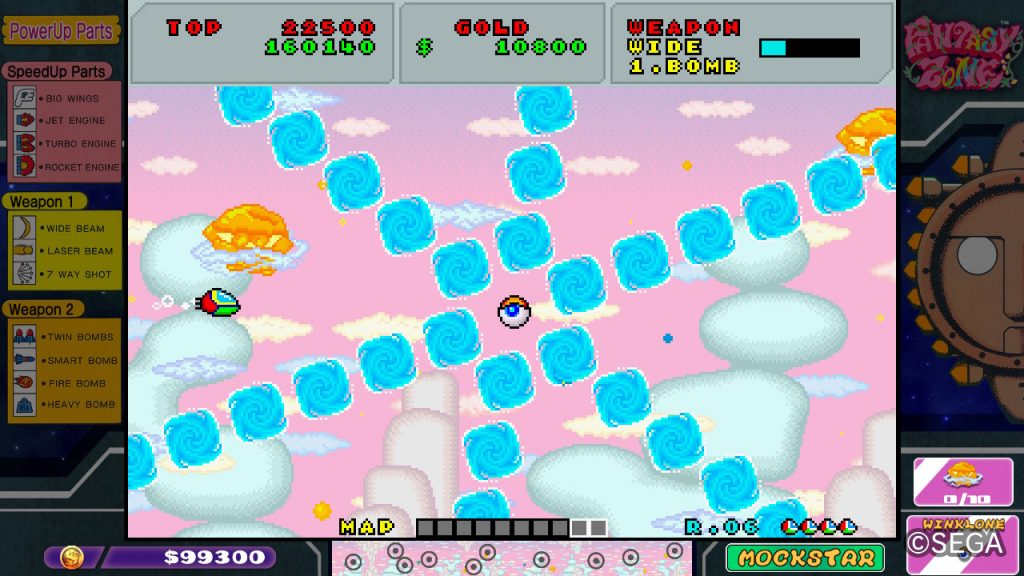 Do you know Kirby, by any chance?

Finally, there are the game’s visuals. They’re very… well, I don’t know, actually. They kind of make the game look like one big hallucination—a game-ified fever dream. That’s probably what they were going for, though. With a name like Fantasy Zone, SEGA probably wasn’t exactly going for realism—something which, once again, still stands out even today. I don’t think that I could tell you a single thing about the inhabitants of this game, other than the fact that I believe that most of them are technically alive and none of them appear to be human, but that’s what makes this art style so great. In fact, I’d even go so far as saying that we need more nonsensical stuff like this in modern gaming. 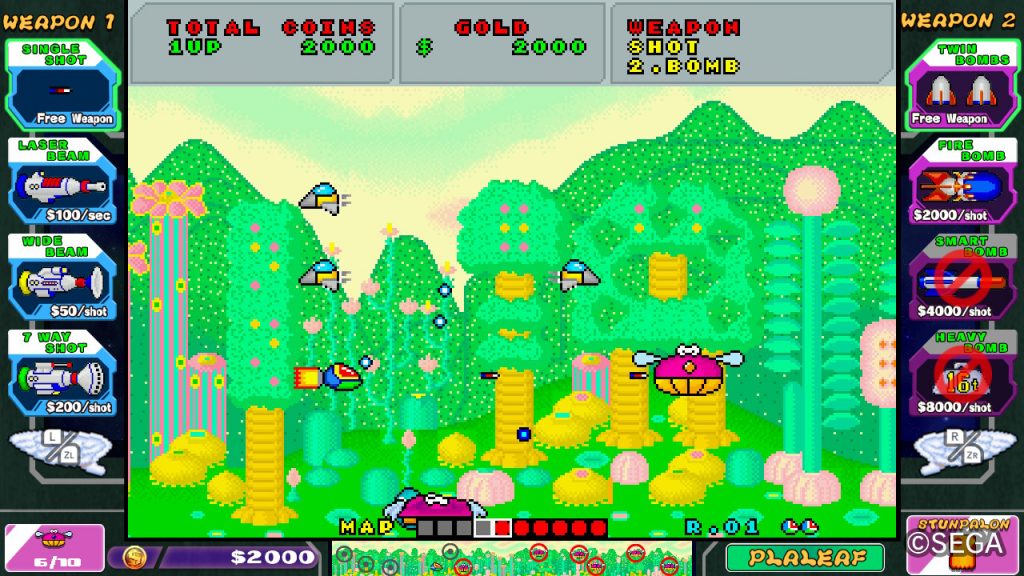 Wondering if SEGA AGES Fantasy Zone sweetens the pot with even more stuff than I’ve already talked about? Well, it does, and it’s so big that it even expands the Fantasy Zone canon! New to SEGA AGES Fantasy Zone is Upa-Upa Mode, which allows players to play as Opa-Opa’s brother! Upa-Upa’s more than a simple palette swap, though. By playing as Upa-Upa, players will have every single item at their disposal from the start. That’s right; there’s no need to wait for a shop balloon to appear! There is a catch, though. While Upa-Upa doesn’t need to buy weapons, he does need to pay to use the ones he has. As in, each non-standard attack costs money. While this might not seem like much at first, it actually changes the way the game works by a significant margin. On the one hand, you mostly don’t have to worry about losing items when you die. But, on the other hand, these items are extremely limited due to how much some of them cost. It gets easier the more you play, though, so Upa and at ’em!

Finally, there are the all-important scoreboards. Not only does the game let you save and upload high scores to a leaderboard, but there’s even a Time Attack mode that lets you compete against people from all around the world to see who’s really the best at Fantasy Zone. Also, none of those people are me; I was doing good just to beat the game.

SEGA AGES Fantasy Zone isn’t anything fancy. But it doesn’t have to be. What we have here is a beloved SEGA classic with a few fun, new implementations thrown in, adding up to a retro experience that’s sure to add up to a fun at-home or on-the-go arcade experience with a decent amount of replayability. Whether you’ve visited Opa-Opa’s world before, or want to finally set foot into it for the first time, for $8, it’s pretty hard wrong with a game like this one.

Full disclosure: This review is based on a Nintendo Switch review copy of SEGA AGES Fantasy Zone given to HeyPoorPlayer by the publisher

Sound Shapes’ Nerdy Cousin Typography is often the brunt of many jokes concerning geeks and nerds alike. While some find the art and history of type face and font…