As I mentioned in my last review, Kohei Horikoshi’s My Hero Academia finds itself in a rather…unfortunate rut within the next several volumes. Yet again, our young heroes of Class 1-A must test their mettle with another U.A.-sanctioned test, this time facing off in a team battle royale against Class 1-B. It’s worth mentioning that while the three-volume Joint Training Battle doesn’t take up the entirety of the aforementioned timespan, its effects linger throughout; for whatever reason, Horikoshi feels the need to highlight every single student right down to their respective Quirks and match-ups, crafting a predictably repetitive narrative that goes against the series’ famed penchant of snappy pacing.

Admittedly, I say all that, but things don’t run out of steam just yet; true, Volume 22’s hardly My Hero Academia‘s most interesting installment, but to Horikoshi’s credit, he knows to lead each 1-A team with the series’ more prominent characters; Bakugo’s team, for instance, is a healthy combination of semi-main characters (Jiro Hagakure) to background filler (Sato Rikidou/Sero Hanata), and the ensuing match is a respectful two chapters — not overstaying its welcome, but just long enough to showcase Bakugo’s dominance over his peers with a touch of character development.

Alas, the other matches aren’t nearly as concise, with the Todoroki/Iida match particularly dragging its heels. While there’s some themes operating here and there (namely Todoroki’s relationship with his powers and his father), much of them are substituted for the superficial thrills found in dream match-ups. This normally wouldn’t be detrimental in itself — as we’ll elaborate later, sometimes there’s nothing wrong with page-turning action — but I think of the series’ previous tournament/training exercises in the Sports Festival and the Remedial Course, both arcs that explored the bombast, impetus, and humbling public service innate within their future roles, and it’s a stark contrast in how this succumbs to flashy fan-service.

Putting it this way: the Sports Festival enraptured us not merely in the rush of meeting new characters and discovering their Quirks (not the least in Deku falling into Shinso’s mind-controlling clutches, which we’ll revisit momentarily), but its early arrival rendered it prime for unveiling our young students’ motivations and how they meshed against each other; here, the ideal-striving soul-searching and big-hearted aspirations that often fuel My Hero Academia‘s finest battles are typically left languishing in the background, and when they’re not (again, Todoroki), the opposing team fails to complement their introspection with enticing parallels of their own.

Not pictured: A can’t-miss shot of Lil’ Uraraka. 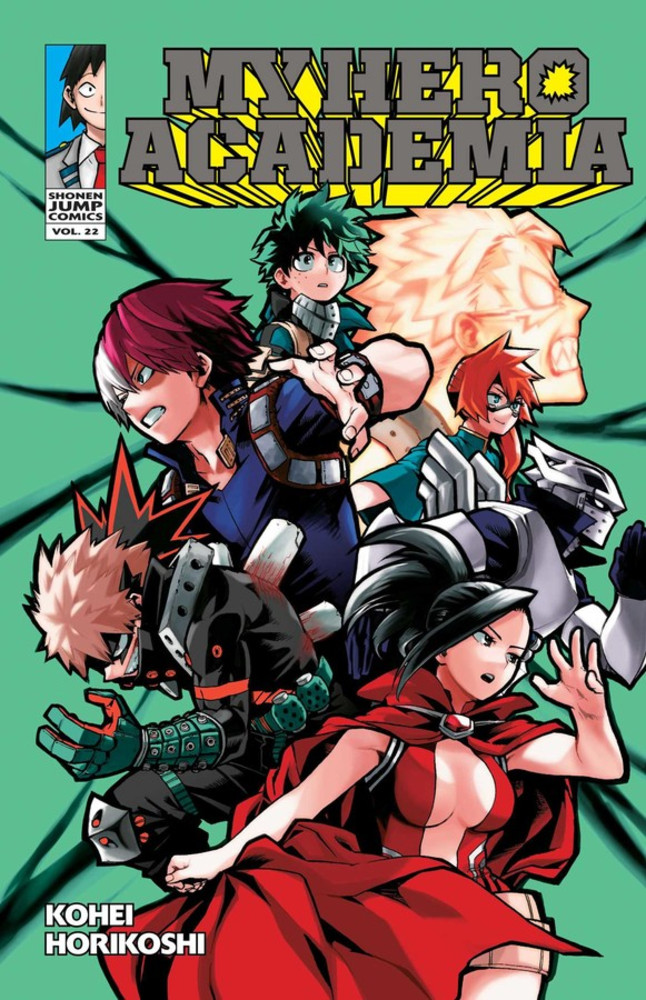 Hence why the only segment of any particular relevance is the final match in Deku, whose One For All powers instantly steal the show in its abrupt evolution. It’s no surprise his match is the most captivating — My Hero Academia is his story, after all — yet the themes coalescing around Deku, Uraraka, Monoma, and Shinso expertly parallel each other in their drives, passion, and respective roads to herodom. We root for Shinso achieving his long-awaited rematch with Deku, discover that Monoma overcame childhood jeers by embracing his Quirk’s dark side (might his pompous act stem from this paradox of donning his inner un-hero?), and explore the inner rumination of Uraraka, who, having been outshone again and again by Deku’s superhuman feats, approaches her profession from a different perspective: what if it’s the hero that needs saving?

Alas, while it concludes this volume with an excellent cliffhanger in the mysterious vestiges of One For All, the two chapters provided arrive too late to justify this arc’s existence. If nothing else, we can appreciate the Joint Training Battle as just pure popcorn action, where we witness Horikoshi flex his imagination in Quirks. From Sekuna Tokage’s Lizard Tail Splitter (which receives a fun author anecdote — isn’t just a little too convenient her clothes regenerate too?) to Kinoko Komori’s deadly mushrooms, Horikoshi certainly knows how to apply his creativity within rousing battle choreography. If we can’t get into the themes provided (or lack thereof), we can at least sit back and enjoy the junk-food fireworks. (And if nothing else, we get some fun contributions here and there from other manga artists, not the least in four-panel comics by Yoco Akiyama (Saguri-chan Tankentai! — a superb slice-of-life tale axed in its prime). I must ask, though: what’s with the random seduction courtesy of Ashido?)

As we’re left with no choice but to settle for Horiksohi’s new direction over the next couple volumes, we can count our blessings in knowing the condensed volume format initially shields us from exhaustion; regardless, as One Piece‘s fans may point out in its plodded Whole Cake climax, burnout is all but inevitable. My Hero Academia has been better than this, and it will get better again in the future, so to entertain any notions of it jumping the shark would be foolhardy; instead, we must ask ourselves: with what we know now, how does this arc fit into the bigger picture? If we emerge from this bloated festivity knowing a character or two’s vindicated (not the least in Shinso, whom this whole arc revolves around), so be it.