A World that Could have Been 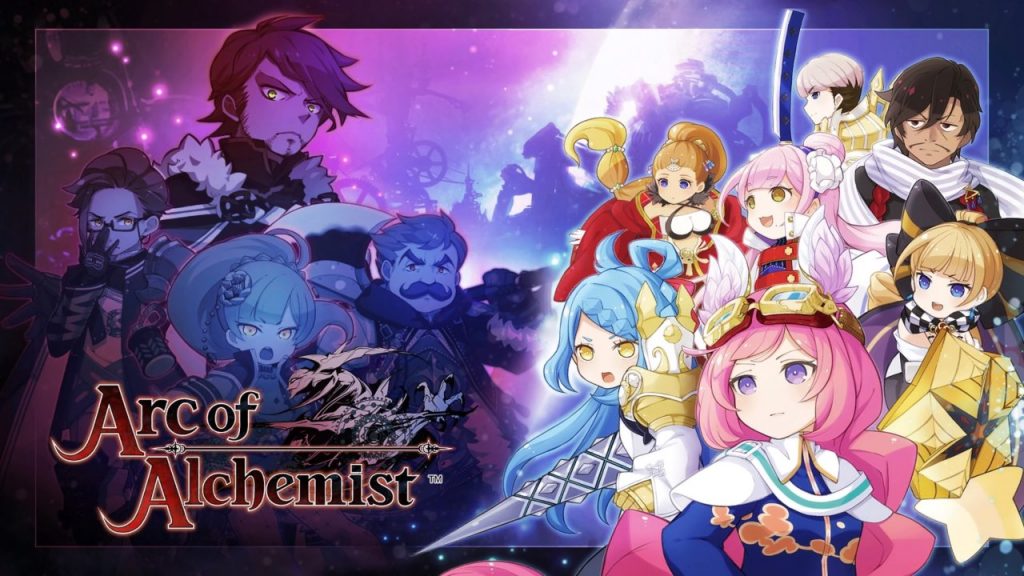 Hoo boy. Okay, before I get into this review, let me say (as I know I’ve said before) that I like Idea Factory. A lot, actually. Their games, in general, are quirky, fun, and easily digestible. Ol’ Iffy isn’t perfect, here, though. It’s not a secret that they, at times, seem to pump out games just for the sake of having more games to sell. Sometimes, that’s fine. And, in most cases, it’s been fine for Idea Factory. But Arc of Alchemist is not “most cases.” I’m not happy that I have to say this, but I’ll say it anyway; I think that IF knew that this game shouldn’t have been released in its current state. Actually, they did know that, because the US release got delayed so that they (at least I assume) could add a little more to it. Sadly, it still wasn’t enough. Arc of Alchemist just isn’t that good—and the fact that I know that it could have been good frustrates me so much.

The Search for Something Great 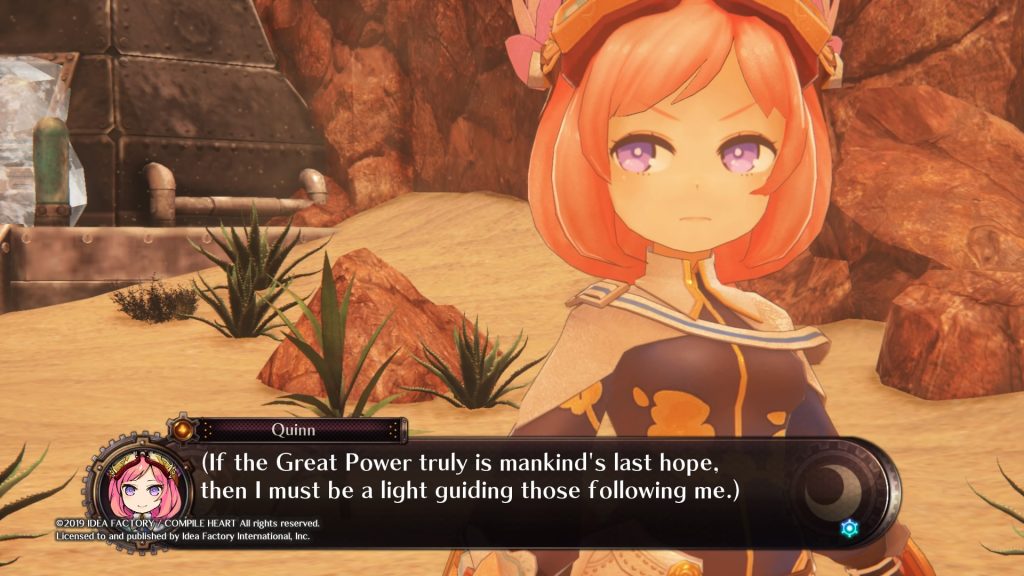 The beginning of Arc of Alchemist, much like the beginning of this review, is rather bleak. The game takes place on a futuristic Earth, where mankind has over-utilized Mother Nature’s natural bounty so much that our once-blue-and-green planet is now largely nothing more than a barren desert, scattered with remnants of a flourishing society past—a true husk of its former self. Fortunately for humanity—or, at least, what’s left of it—hope isn’t entirely lost. Tales of a mysterious Great Power, hidden within the Desert of Beginnings have tantalized those who rule over the few remaining kingdoms of Earth, compelling them to send out their finest bands of explorers in order to claim said power for their own—explorers such as Captain Quinn Bravesford and her small-yet-skilled brigade. Skillful or not, though, Quinn & co. won’t have an easy time finding the Great Power. Between nasty desert-dwelling creatures, rogue automatons, and troupes from rival kingdoms, this expedition is all but assured to be a struggle for survival through-and-through.

I won’t beat around the bush; this game’s story is pretty generic. To be fair, the plot itself isn’t the most generic thing in the world. Sure, there’s plenty of “post-civilization” stuff, but the game does a good job at setting up a world full of societal and technological progression and regression—but setting up is all that it really does. Not only is there ultimately very little in terms of telling the entirety of the story, but the actual storytelling itself is so blase that it’s easy to forget the specifics of what actually happens. It attempts to make up for this by showing you “skits” about each character’s past, but this doesn’t really do much, either. They’re pretty generic, and they’re also forced upon the player each time you go back to your home base, which is pretty annoying if you’re just dropping in to check on something. To be fair, there are a few cute moments here and there, but other than that you wouldn’t be missing much if you skipped all of the dialogue (which I’m not actually recommending). 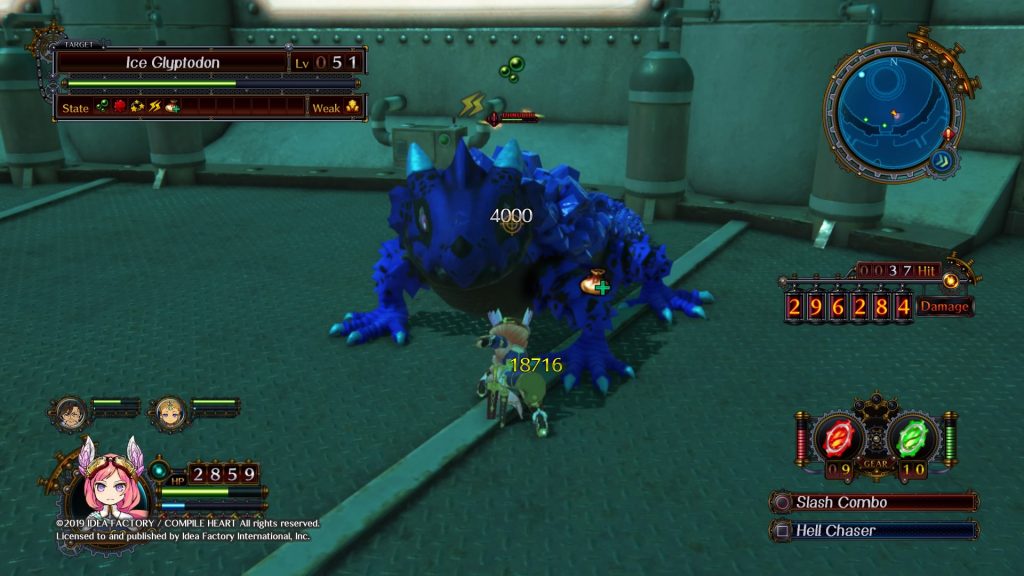 If there’s one thing that I need to credit IF for, it’s the fact that they attempted to take Arc of Alchemist‘s mechanics in a direction much different from their normal games by making it a hack-and-slash RPG with large spaces to roam around in and plenty of nooks to explore. Given the fact that 90% of this game takes place within a desert—literally all areas but one—that’s honestly a really good choice. …but it seems like they took the whole “make the game like a desert” motif a little too far, because, much like deserts themselves, there’s never a whole lot to do. Honestly, this game’s setup was really cool (and I say that very earnestly). I liked that IF was abandoning their normal dungeon-crawler shtick in favor of something slightly more open-world. But an open world doesn’t mean anything if there’s nothing to do in it. Sure, the game spawns plenty of enemies, and the occasional treasure chest and/or item collection point, but not nearly enough to justify putting in as much open space as they did. There is way too much empty space in this game, and the amount of times the game tries to trick you into exploring it all by making you think that you’re heading into some secret, treasure-filled nook only to be rewarded with nothing is slightly maddening. And it doesn’t help that the framerate gets progressively worse the further you get into the game, either.

While I’m on the topic of exploration, I should probably take the time to talk about the game’s one unique mechanic; the Lunagear. Scattered throughout the game are things known as “gimmicks.” Ranging anywhere from tall cliffs to raging fires, to icy crevices, gimmicks vary quite a bit in all ways but one—they require the use of the Lunagear to overcome. By harnessing elemental powers such as Water and Fire, players can use the Lunagear to interact with gimmicks and solve puzzles. But, of course, there’s a problem: the game doesn’t exactly seem to know what it’s doing with gimmicks. Sure, some of them are really straightforward, making it easy to see when and why you need to interact with them, but others just seem… random. There are torches in the middle of the desert that do nothing when lit, fans that look like they open doors but don’t (and also seem to have broken animation cycles), and raging fires that are faster to walk around than put out. I get putting in “false gimmicks” in order to cleverly trick the player, but the amount of seemingly random and useless gimmicks left me feeling very perplexed and a tad frustrated. 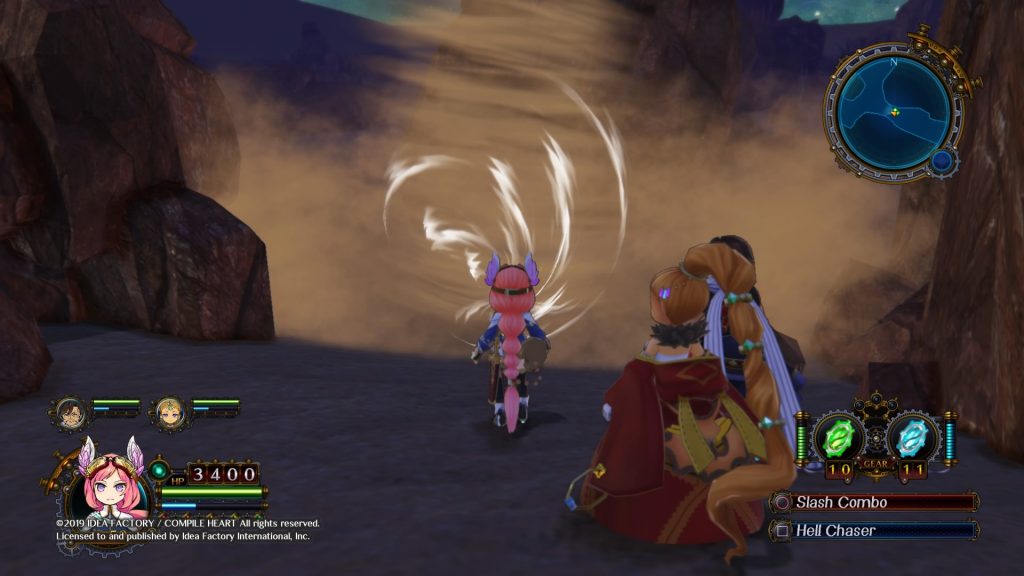 I’ve heard of fighting fire with fire, but fighting wind with wind?

Fortunately, while exploration and “puzzle”-solving might leave something to be desired, the game’s combat is actually pretty decent. As I’ve already said, Arc of Alchemist features real-time hack-and-slash combat. Fights themselves are pretty light mechanically, with players being able to perform two different attacks, and dodge roll. Oh, and you’ve got a nifty finishing move that you can charge up, too. Naturally, said attacks vary between weapon type and character, but that’s not all—they also vary from weapon to weapon as well! Sure, some of the different attacks are a bit same-y, but it’s still a cool way to spice things up. And, speaking of spicing things up, Arc of Alchemist is pretty nice with its customization. Players are able to equip Quinn with any type of weapon (although I personally stuck with swords), and can build a party of three from an impressive 11-character roster—including parties without the game’s leading lady (which is actually a feature new to this version of the game)! Unfortunately, the same can’t be said for the game’s enemies. While I suppose that you could argue that not much life exists on a planet in as bad a shape as the one in this game, there’s still no excusing how little diversity there is when it comes to enemy types. I mean, come on, I can only fight so many scorpions, giant frogs, and robots before they get boring. 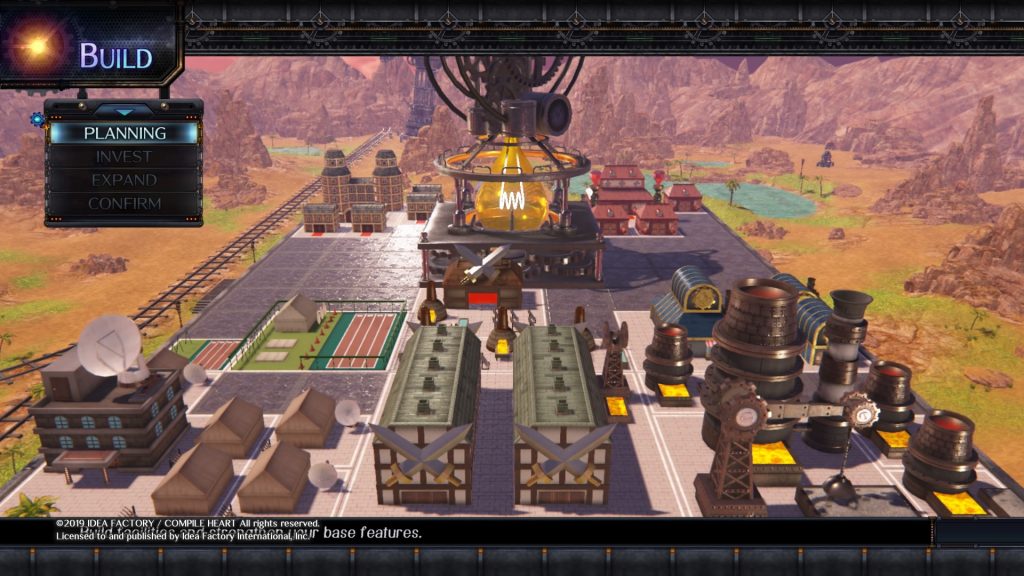 It takes a village to raise a child. Er, wait, that’s not right…

Finally, there’s the player’s HQ. Acting as both a literal and metaphorical base, the HQ is where players can go to save, replenish their stock, and purchase items. But that’s not all! By scavenging for items and collecting enemy loot, players can build up their HQ by investing in it and adding buildings, which, in turn, lets them access a greater variety of goods to purchase and trade for. And, honestly, as simple as it is, it works pretty well. The only real complaint that I have regarding it is how difficult it is to max everything out. Some of the items needed for your final few investments are extremely hard to find—only being dropped by optional, level 99 bosses—making farming both monotonous and difficult due to the game’s wonky level pacing which sees you zip-zooming up to level 60 easy-peasy and then slowing it to a crawl up until 100. Thank goodness it isn’t necessary to beat the game.

I think that Arc of Alchemist could have been something great. But, sadly, it wasn’t. Despite its unique premise, there are just too many problems going on with it to be able to objectively and fairly, call it “good.” With that being said, I’ll let you in on my subjective opinion; I kinda liked it. Yeah, it wasn’t great, but it’s something that I can come home to after a long day and just zone out to. Is it worth $40? No, I’d say not. But it might not be the worst idea in the world to pick it up if it ever goes on sale.

Full disclosure: This review is based on a PlayStation 4 review copy of Arc of Alchemist given to HeyPoorPlayer by the publisher

Only the darkest souls feed perilous yokai in Nioh, the Sengoku-era Soulslike   Nioh was one of the first games left to the wayside as this year’s early months…