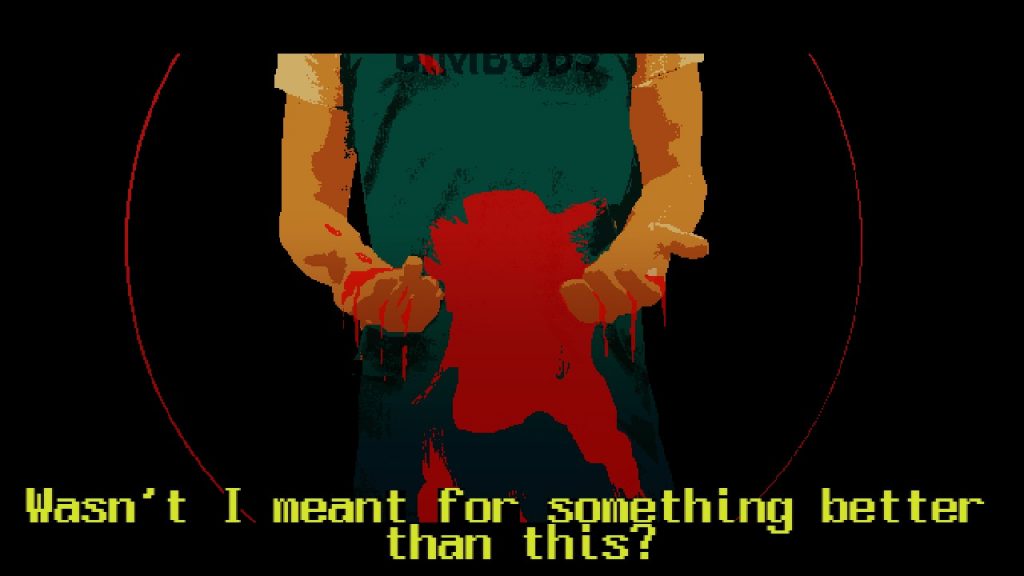 Every once in a while, after all my gaming assignments have been cleared out and I’m in the mood for something new, I snoop around in the new releases section of Steam to see if I’ve missed anything noteworthy. This method is one of my favorite ways to find great new games that haven’t had much hype yet — it’s how I found one of my favorite games of 2019, Kind Words (Lo Fi Chill Beats to Write to) — and it’s how I stumbled upon a straight up masterpiece that I was wholly unprepared for: Star Fetchers. 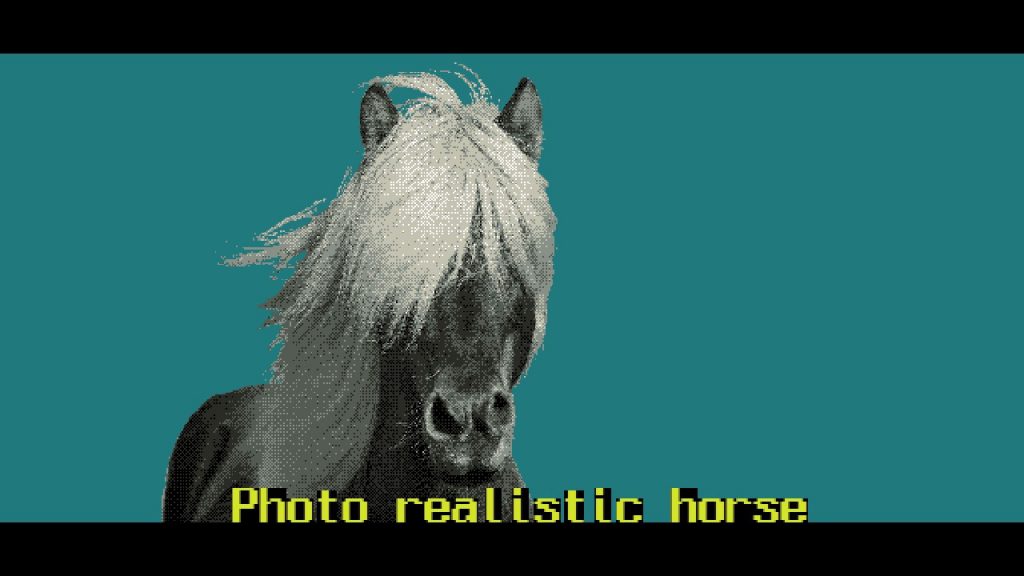 Currently in development by Svavelstickan, the first chapter of action-adventure Star Fetchers quietly released on January 17 as a free-to-play demo and has already obtained the coveted Overwhelmingly Positive rating on Steam. In the same way that everyone and their dog encouraged you to watch the Korean psychological thriller Parasite without being able to truly describe it, Star Fetchers feels like a mental, visual, and emotional assault that I’m still reeling from (and I mean that in the best possible way). 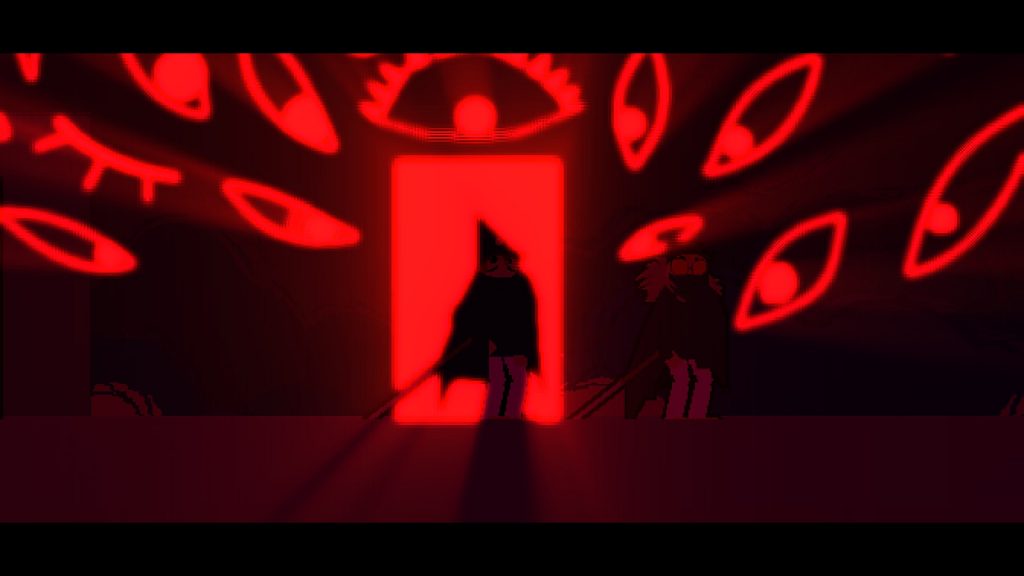 The story follows Sanyati, an unhappy wage slave with no real goals or purpose in life. Sanyati is forced to perform menial tasks at their shitty job, such as taking out the trash and slaughtering pigs in the meat dungeon while the shopkeeper and son laze around or bunk off entirely. After clubbing a pig to death in the meat dungeon, Sanyati looks at the blood on their hands and ponders if there’s more to life than… this. Everything comes to a head when Sanyati is forced to take out the trash and the bag rips, dumping garbage all over them. 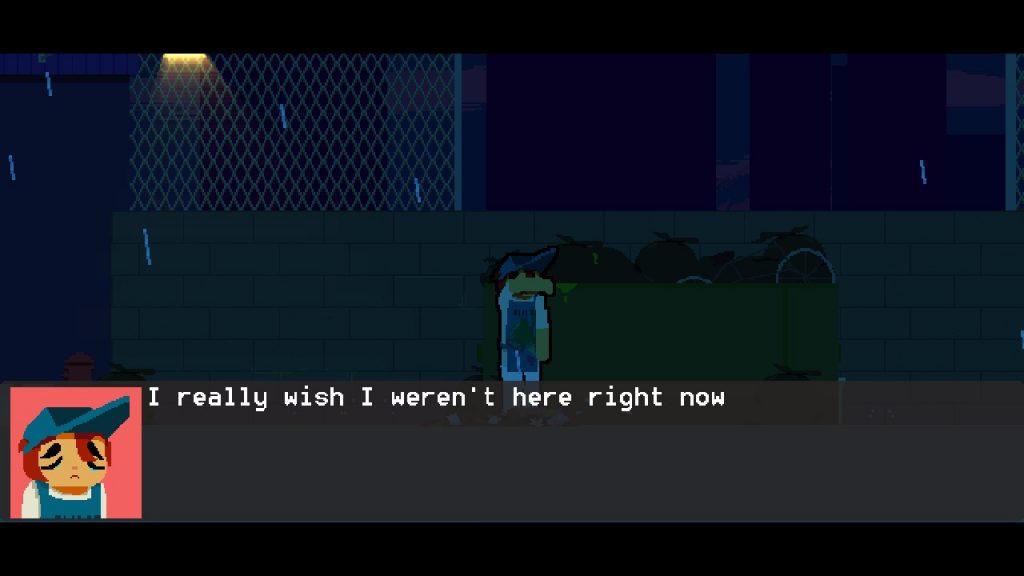 Not gonna lie, watching Sanyati cry over this was a goddamn gut punch. It seems so trivial, but having been here myself, where just the smallest thing can set you off, like… this was real, raw, relatable emotion — and only 15 minutes into the game!

That’s when a mysterious stranger, Zambezi, appears and offers Sanyati a way out. See, Sanyati’s a loser — they have no direction and no purpose in life, letting it pass them by without doing much of anything. Of course, that makes them absolutely perfect for the job! Join Zambezi and Thornz to take down those who oppose the organization, unravel conspiracy theories, and generally have a kickass time. Sounds fun, right? 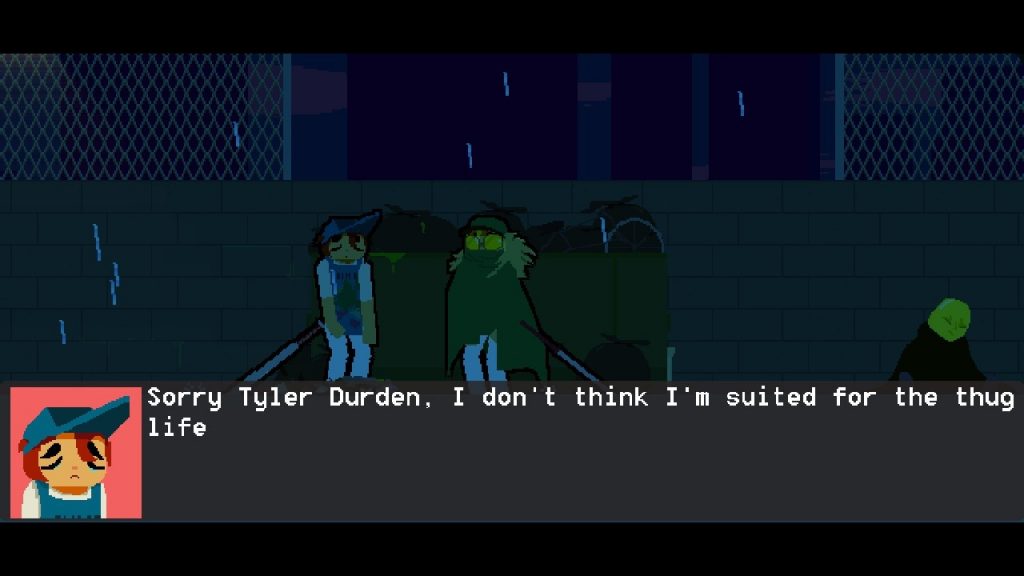 Enhh… maybe not, they say, as they head back into your soul-crushing job because God knows why.

Just as Sanyati was asked to work over the weekend so their employers can skip work to watch the new Star Wars movie, a car careens into the shop — directly on top of the most aggravating example of nepotism who would never fail to casually mention they were better than Sanyati. 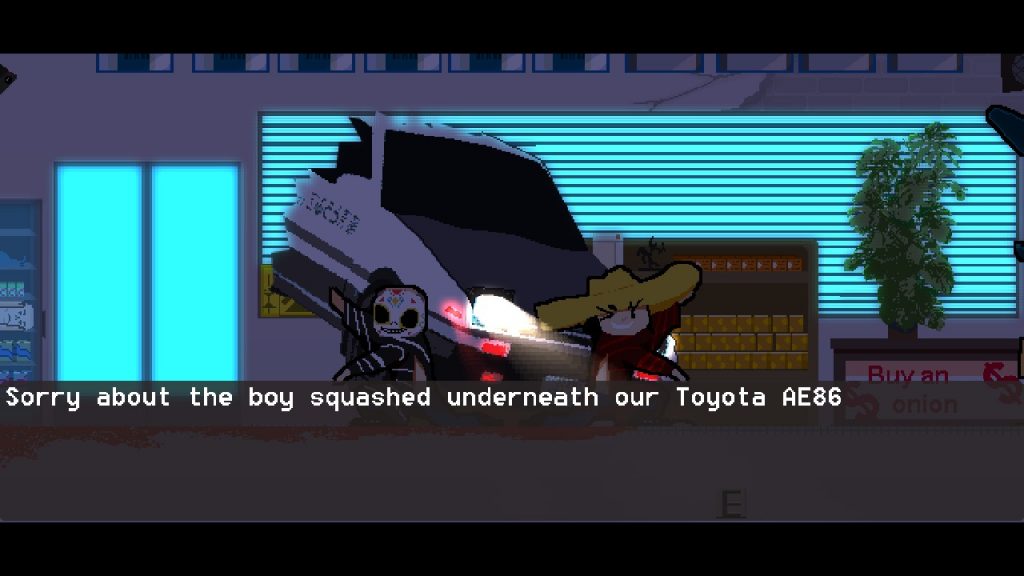 That’s when Zambezi swoops in, saves the day, and forces Sanyati to join Thornz (and then subsequently robs the store). 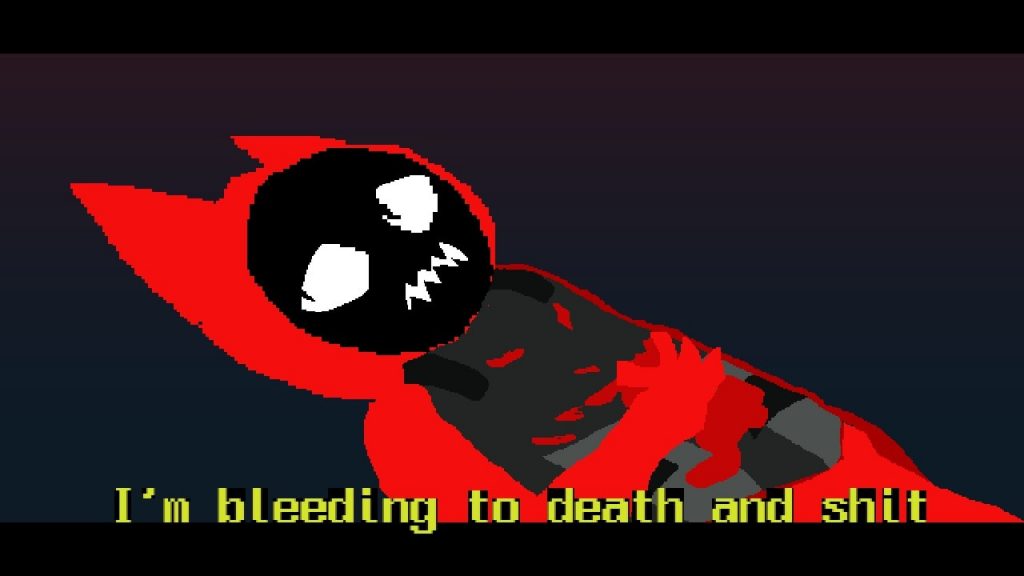 I don’t want to keep spoiling the story, as it’s a free-to-play game and you should definitely try it for yourselves. Everything about Star Fetchers is wonderful; I personally felt like the aesthetic, while original, hearkened back to a simpler time when the Dreamcast and PS1 still reigned supreme. Star Fetchers definitely feels like the kind of weird Japanese import that would occasionally bless Western game shops before a mix of public outcry and disinterest for niche gems forced it off the shelves. This is the exact game teenage me would never be allowed to play but would ultimately obsess over until I was old enough to buy my own shit. God, this game is DIVINE. 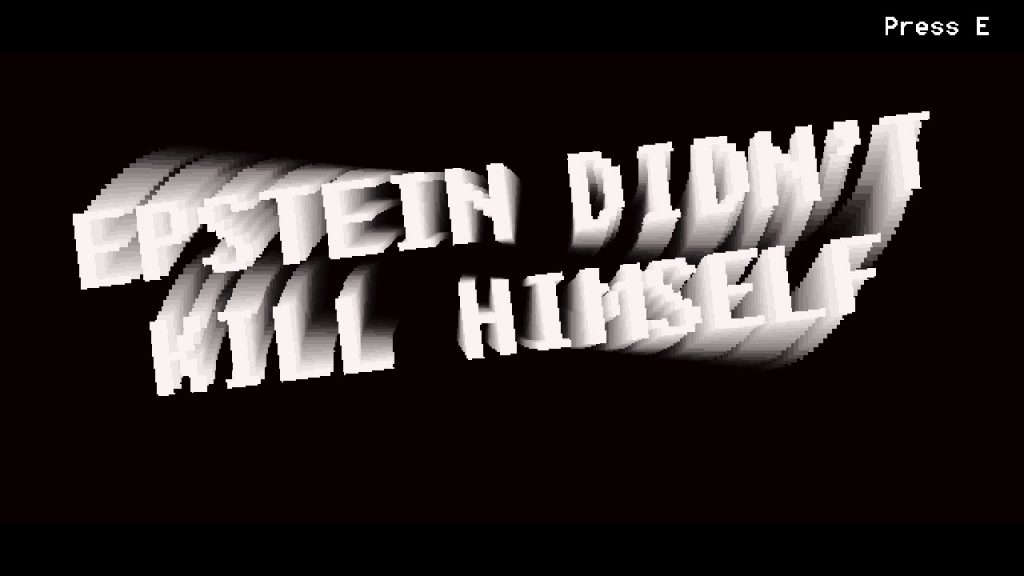 It’s hard to pin down why, though — sure, I could just say everything about Star Fetchers is amazing, but where to begin? The music is glorious, the aesthetic is intoxicating, and the storyline plays like No More Heroes meets the most random Dreamcast import you can think of. Even the controls, which are hard to get used to at first, are reminiscent of a time when, decades ago, clunky controls added a weird charm. This is fresh, new, exciting, nostalgic, traumatizing, and humanizing all in one eye-candy eargasm. W O W! 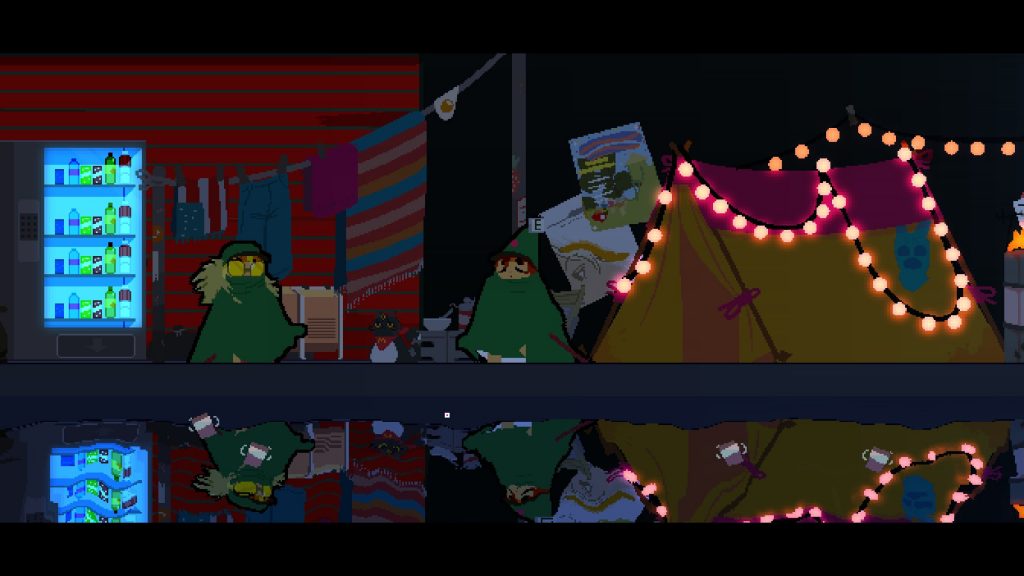 I won’t say much more, as I’m desperately begging you to play this — especially if you grew up gaming in the early 2000s — but I’ll leave you with a quote from the first few minutes that proves that despite Star Fetchers’ wacky exterior, it’s really a deep, scintillating hot take on capitalism, overwork, and the degradation of the soul in modern society. 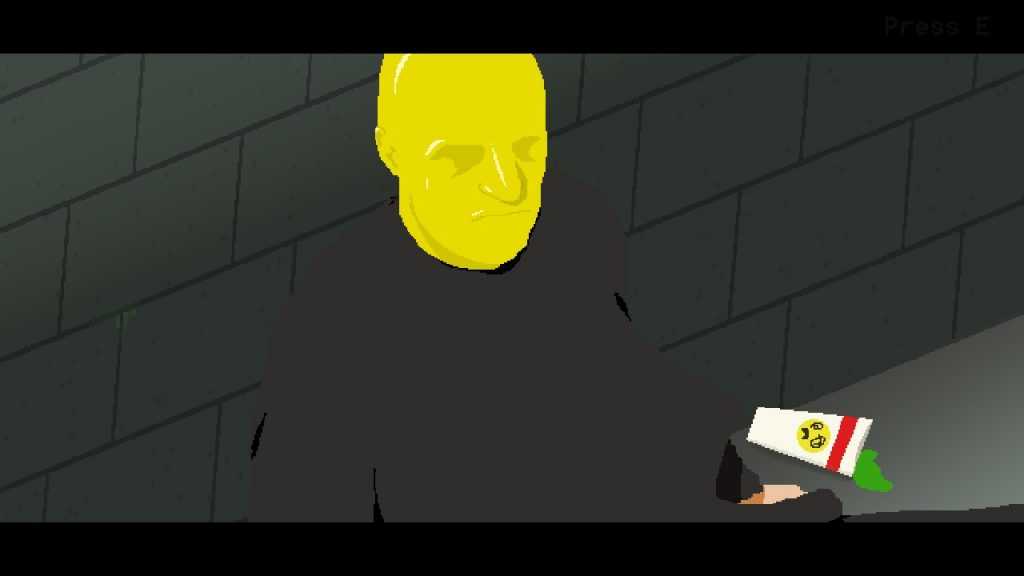 “On the morning of the twelfth of November, after only two years in service, I made my last stock calculation ever, and was carried out of Goldman Central Bank with my arms behind my back. As a ceremonial gesture before leaving, they dunked my head in gold and sang For He’s A Jolly Good Fellow. I looked over at my co-workers in horror; I was rendered useless, and I was replaced by the new and superior.

The moment was a revelation as I think I truly bridged the gap between man and machine: because, even without the capacity for emotion, or even the basic understanding of it, I knew exactly how it felt to be human.”

It’s amazing. It’s free. It’s worth every second of your time. Please play Star Fetchers as soon as possible. 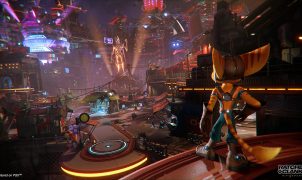