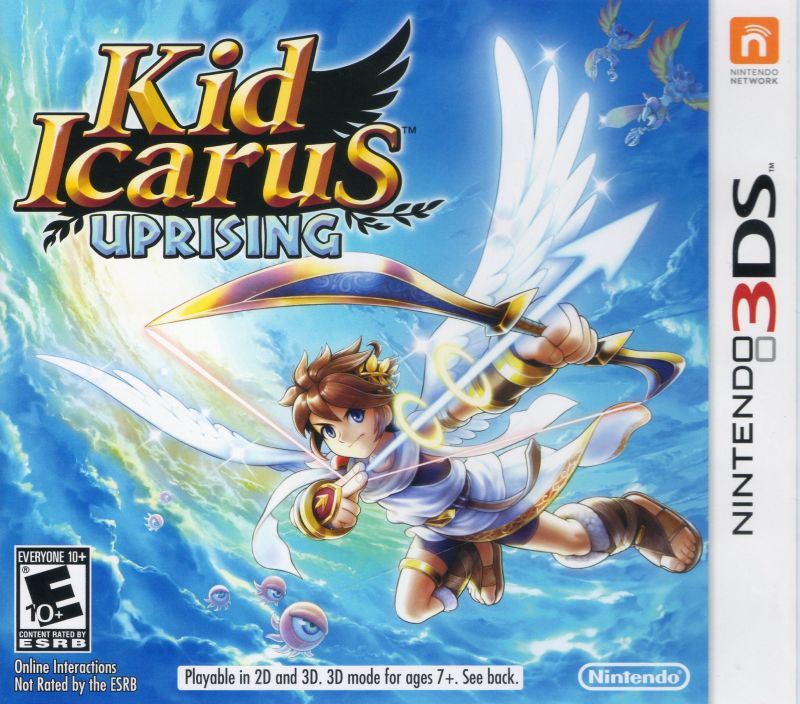 What better method to highlight 3DS’s capabilities than Kid Icarus: Uprising gleefully reforging an NES classic as a third-person shooter? Reintroducing Pit after his comeback in Super Smash Bros. Brawl, our angel now stars in a tongue-in-cheek Greek shmup, his quest adorned with five-star production values (namely a Yasunori Mitsuda-headed orchestral score), supplied with a massive armory compatible with both his conflicts against gods new and old alongside a rough and tumble multiplayer mode. It is peak-Masahiro Sakurai — presenting an endless flood of content meant to keep us engaged for time immemorial in everything from high scores, weapon forging, and collecting idols (think Smash Bros. trophies). 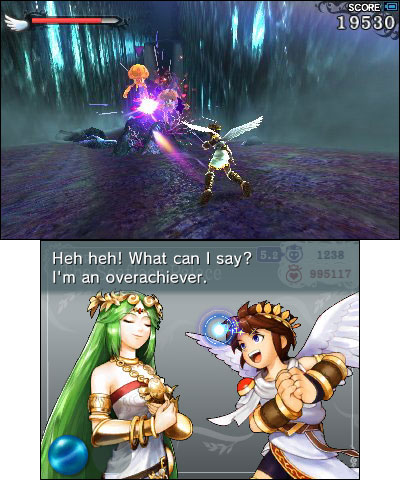 We can elaborate on the elephant in the room regarding Uprising‘s infamous controls — and really, let’s not pretend Mr. Sakurai doesn’t have some deep regrets regarding its development — but for all its struggles, it represents gaming purity more than anything else. Did it really need an AR-compatible card game? No. Is it cool as all hell to experiment with? Yes. As carefully devout in appealing to our grit in its Fiend’s Cauldron difficulty system — punishing our failures by lowering difficulty for continues — as much as it deviously distracts us with Pit and co’s witty repartee, such a radical departure from the source material’s gameplay matters not when Uprising joyfully preserves the same light-hearted heartbeat as its progenitor; really, what better evidence do you need than playfully disarranging its menu buttons?

Best Moment: The Space Pirate Ship level is the game’s best source of shmup spectacle — wondrous visuals abound as Pit zooms up from the celestial heavens into the nebulous galaxies above as he squares off against a titanic dreadnought. All to the eye-popping tune of the 3D effect!

Worst Moment: If the controls didn’t turn you off, then levels like the Chaos Vortex and Dyntos’s Foge did get a little evident in reusing past ideas and whatnot.

Best Song: In a soundtrack full of incredible orchestral hits — many laboriously arranged to five-minute flying sessions — Magnus’s Theme best conveyed the epic struggles of this God-conflicted world. Shame the world’s strongest human didn’t have much of a presence. 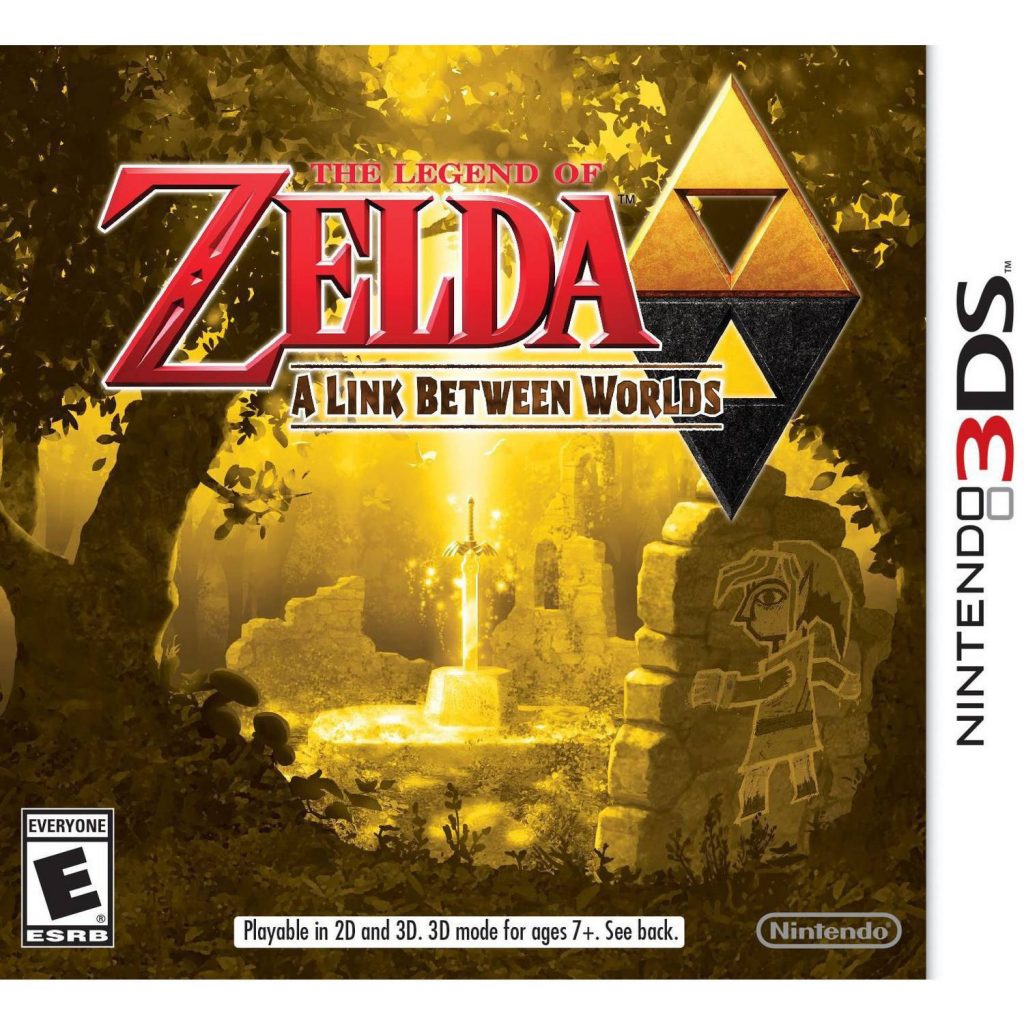 What to do when your signature fantasy series is running out of steam? Look to the past for inspiration; namely, A Link to the Past. In retrospect, a sequel to the SNES masterpiece could’ve easily backfired — its revered impeccability aside, the 1992 classic settling the tried-and-true formula for the series may’ve produced a redundant sequel (especially when factoring in a familiar overworld). When wall-merged into Hyrule’s dual-worlds once more, however, we bare witness to a delicately-crafted balance in A Link Between Worlds‘ weapon-rental system — wherein we journey Hyrule with the tools of our choosing, tackling dungeons in any which order we please. In what already felt like an age, The Legend of Zelda finally steps out of its comfort zone. 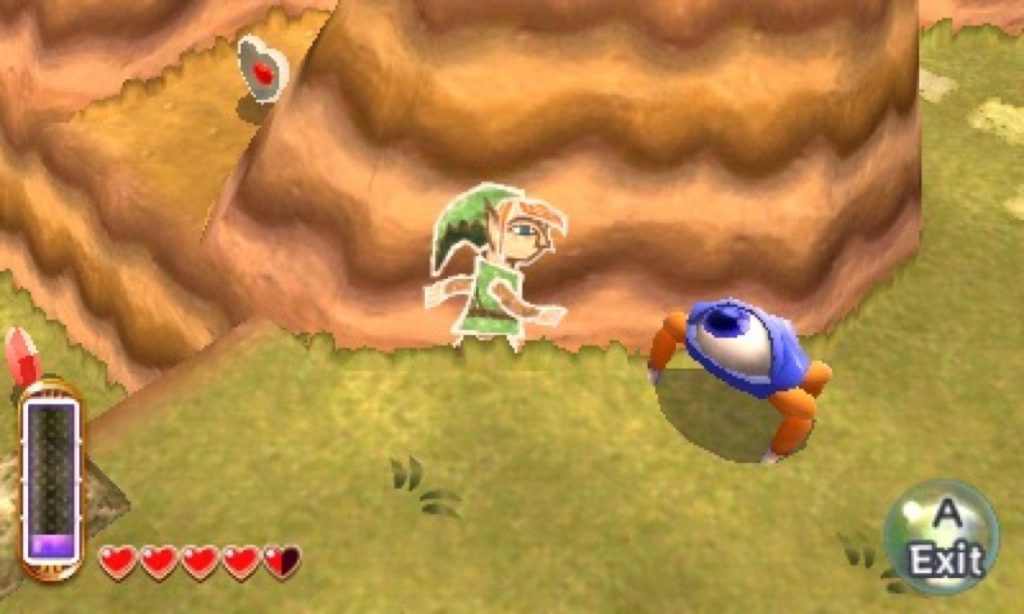 Some saw this system as diluting the game’s challenge, but when applied to ALTTP’s compact overworld and flawless pacing, this open-design’s woven effortlessly throughout A Link Between Worlds. There’s no sluggish fetch quests, no patronizing companions solving puzzles for us — just whatever we desire to carry on our backs. In its wall-merging mechanic is old made new again, slinking about hallowed old stomping grounds as we plop off Baby Maiamais and slip through dimensions. Presented with toy-esque graphics and appropriate music, this nostalgia trip to our miniature gardens isn’t merely a fitting tribute to the past; nay, it’s an affirmation towards the future to an certain acclaimed 2017 video game.

Best Moment: When I was slinking about in Lorule’s swamps and, in wall-merging through a multi-dimensional fissure — unexpectedly found myself in a Light World dungeon: the Desert Palace. Now that’s the sense of discovery I missed from Zelda.

Worst Moment: I won’t lie: the opening fetch segment? Nothing terribly offensive, but it echoed the slow beginnings that eroded more recent 3D Zelda games. Not that anything would ever top ALTTP’s all-time masterpiece opening, but still…

Best Song: No surprise that Koji Kondo’s original score — some of his best work — remains the star, but Ryo Nagamatsu’s up to the challenge in new classics like Lorule Castle, atmospheric dungeon themes like Desert Palace, and sneaking in a Nintendo Land original in the mini-game theme. And hey, those Milk Bar tunes — peak medieval!

Final Thoughts: So uh, does this mean we can finally have a Wind Waker sequel, or…? Well, okay, it’s been seven years, but a GameCube millenial can dream! 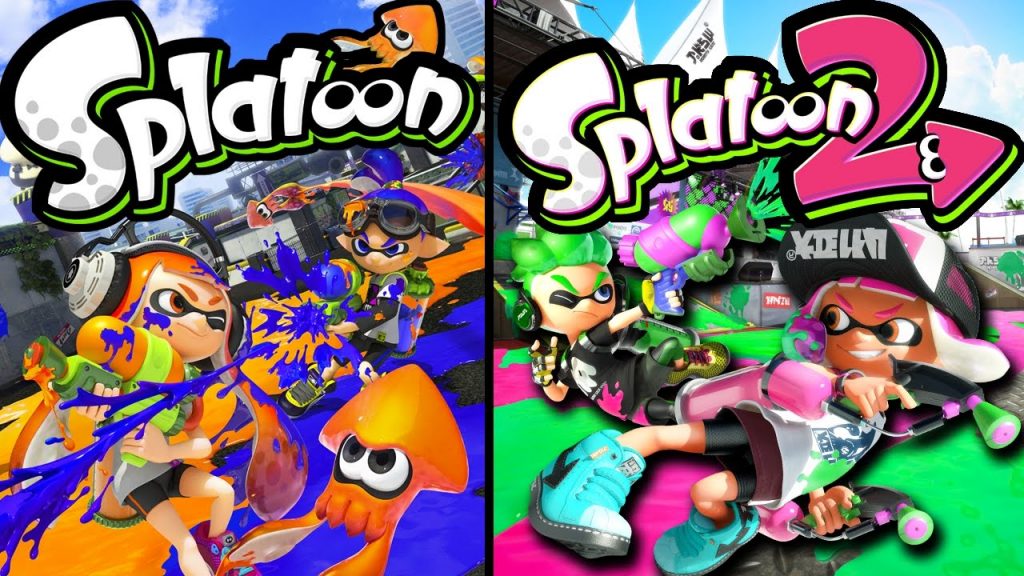 You’re a kid now; you’re a squid now! Nintendo’s best new IP this past decade is its most successful debut in Splatoon — their off-the-wall shooter concept in turf wars enacted by teenage squid/human hybrids was an instant hit from the moment of its E3 2014 debut, and while its GamePad-centric gameplay arrived too late to revitalize the Wii U, the concept was strong enough to cast aside its second-screen shackles for a Switch sequel in Splatoon 2; really, both are so brilliant I couldn’t pick one over the other, and so both share interchangable spots here. 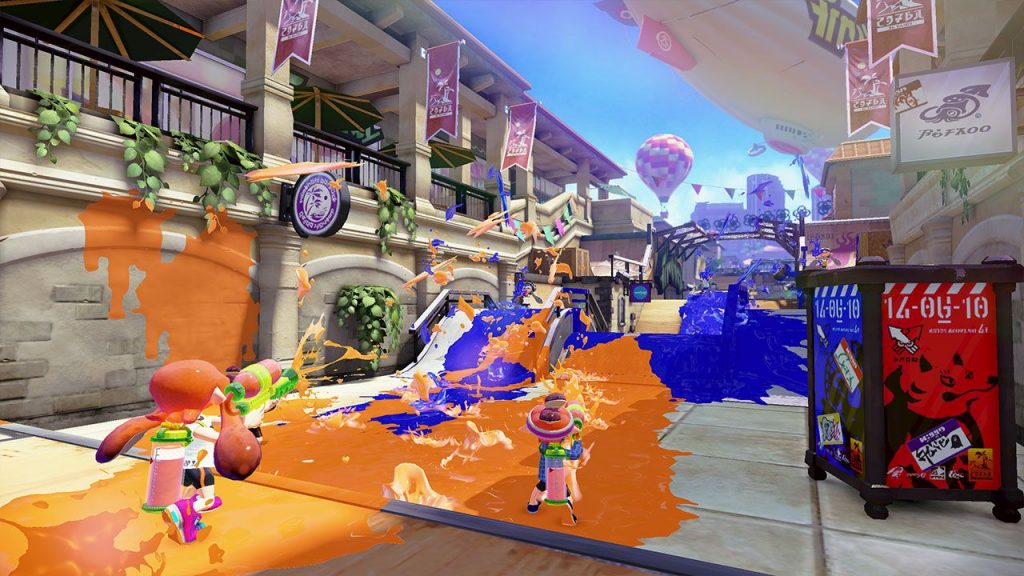 Be it the creative blend of Japanese imagery and Nickelodeon-esque 90’s visuals (as we learn, Super Soakers are alive and well in this post-apocalyptic setting), an ever-expanding selection of guitar/synth music accompanied by fictional vocals (all represented by in-game bands!), and the adorable cast flexing between rock star concerts (Off The Hook!), racially-motivated underground wars, and even shady part-time jobs, both Splatoon and Splatoon 2 are confident splashes of creativity applied not just Nintendo’s embracing of modern multiplayer (both games are primarily online ventures), but in their intuitive approach to Turf Wars. In team-coordinated efforts to splatter as much color-coded ink across the battlefield as possible, the concept’s innate addiction plays into a system where anyone, no matter how inexperienced or how young, can contribute and even turn the tide of battle just by shooting. Framed within the most uncynical of approaches to the shooting genre, it’s a ink-redible balance that can only come from the deranged minds at Nintendo. 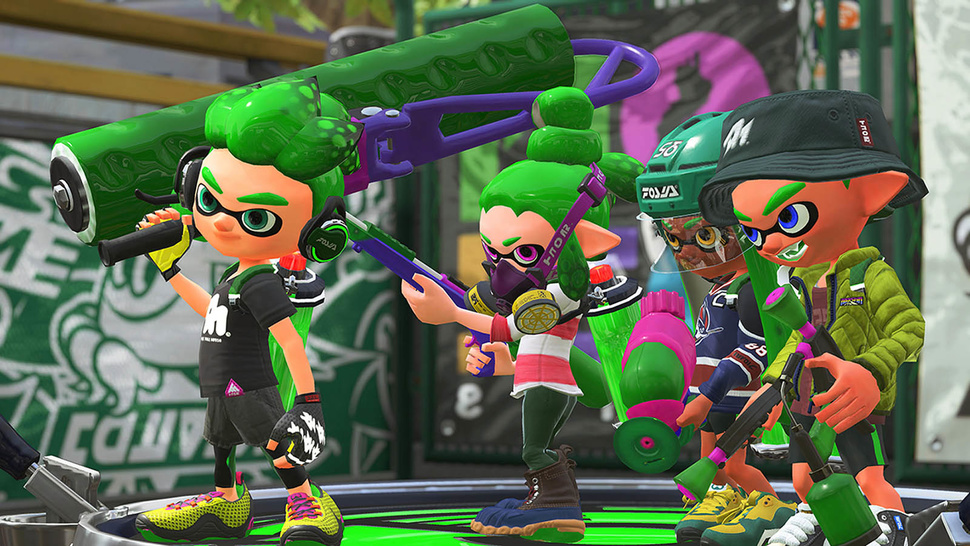 Best Moment: In Splatoon? Trying not to choke up when the Sunken Sea Scrolls unveil the tragic past of a certain Turf War ref. (Also can’t forget the thematically-appropriate SpongeBob vs. Patrick Splatfest, which led to this golden reference.) In Splatoon 2? The grim recognization of what exactly you’re constructing in Octo Expansion…ooh, I still get the heebie-jeebies!

Worst Moment: In Splatoon? Learning that the great Splatoon 2 migration has rendered its once-populus battlefields with hackers (that, and thanks to its multiplayer set-up, it ain’t gonna have much of a shelf life whenever Wii U’s servers shut down.) In Splatoon 2? I still can’t make up on my mind on Salmon Run’s infrequent availability, but it’s certainly controversial.

Best Stage: In Splatoon? Saltspray Rig, Camp Triggerfish, and Kelp Dome were my favorite haunts. In Splatoon 2? I always kept my eyes peeled for Manta Maria and Starfish Mainstage.

Best Song: In Splatoon? Kraken Up!, performed by the (sadly disbanded) Squid Squad. In Splatoon 2? I didn’t think the Turf War tunes were as classic, but Wet Floor’s Inkoming! — incidentally, the game’s main theme — remains my favorite, regardless.

Final Thoughts: Y’know, I’ve beaten Octo Expansion, but I never got around to clearing all the levels…I heard it has a super-tough secret boss? 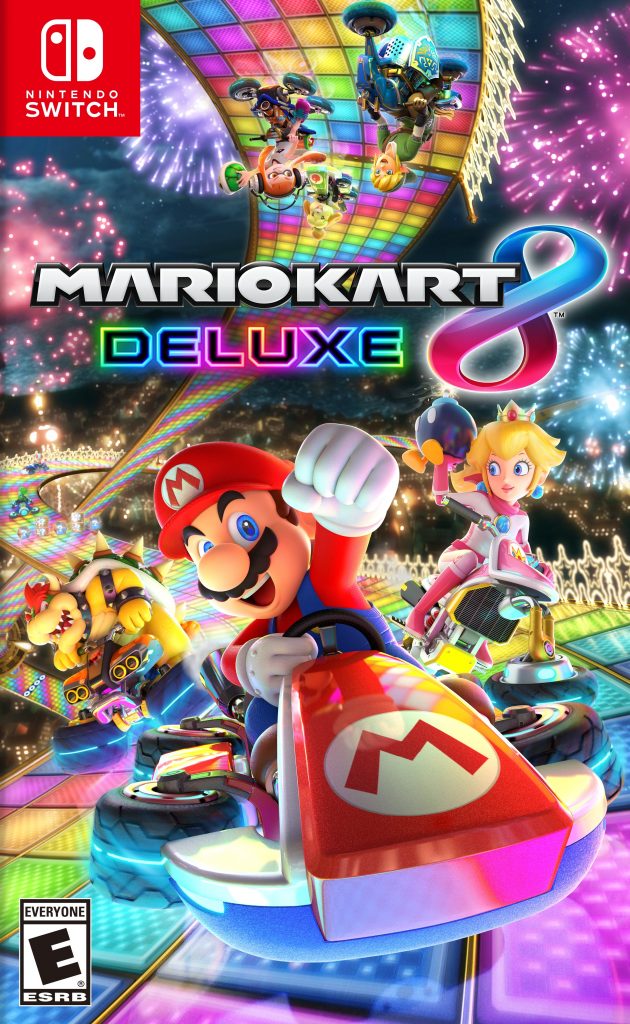 Were we graced not once, but twice with the greatest racing game ever made? A bit of a presumptuous claim for me to make, since I’m not into the genre and all, and yet I’d like to think burning rubber doesn’t get any better than Mario Kart 8. The Wii U’s best-selling game — and by association, its upgraded Switch port — is silky-smooth in diffusing scenic anti-gravity tours and cutthroat competition, crafting turbulent new tracks in the topsy-turvy Wild Woods and Mount Wario’s three-act descent all the while re-imagining classics in DS Wario Stadium and GBA Mario Circuit. It’s all simply sublime, expertly subtle in weaving its rhyhtmic Coin-collecting as we mix-and-match vehicle set-ups. (And yes, perhaps the Wii U’s Battle Mode wasn’t so “sublime”, but that’s what the Switch version’s for!) 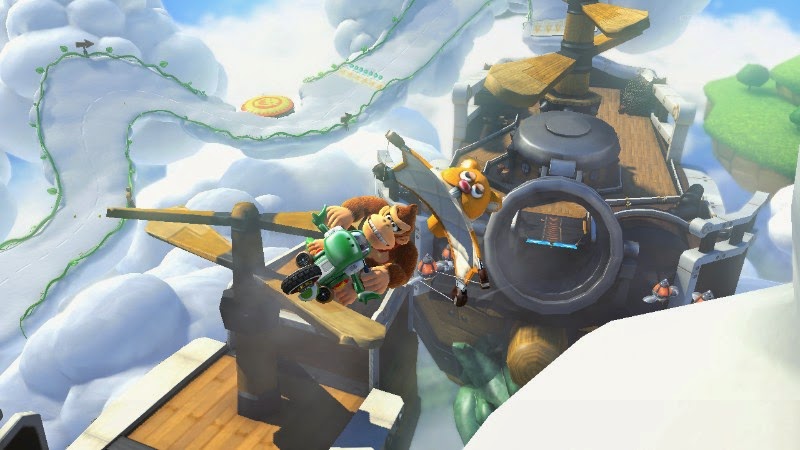 And yet even then, it’s as much about as drowning you in an audio-visual experience as anything else. From the nighttime carnival of N64 Rainbow Road N64 to Dolphin Shoals’s exquisite audio transition, Nintendo’s big band magicians belt out one instant classic after the other for courses punctuated with endless references and subtle world-building (do the Yoshi inhabitants of Sweet Sweet Valley ever engage in, uh, “hunger pangs” regarding their Gingerbread neighbors?). Topped off with hysterically passive-aggressive facial animations courtesy of Mario and the gang (Remember Angry Luigi? Why else do you think Nintendo included an editable replay feature?), and you have an immaculate concentration of feel-good Nintendo magic in Mario Kart 8 — a readily accessible drive whenever you need to blow off some steam. 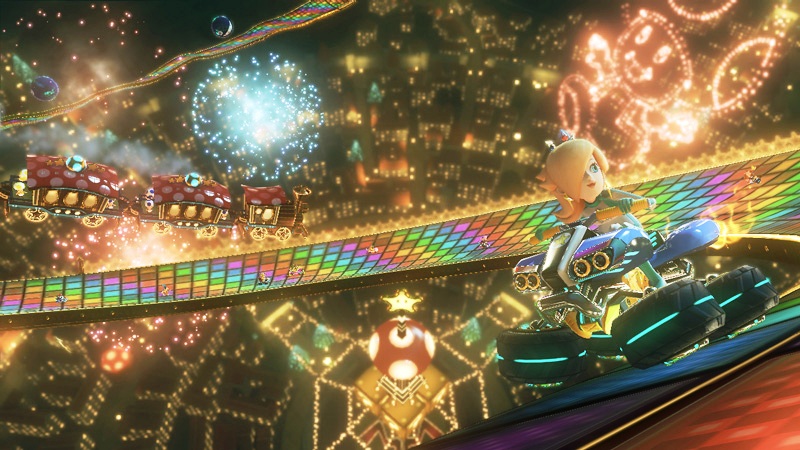 Best Moment: No, seriously, that first time you engage in N64 Rainbow Road’s nostalgia bomb or emerge from the waters of Dolphin Shoals? Beautiful. Just beautiful.

Worst Moment: While the Koopalings were a celebrated addition, they left sparse room for newcomers, leaving us with uninspired dreck like Pink Gold Peach or Baby Rosalina. Thankfully, the DLC/Switch port crossover characters in Link, Inklings, and Animal Crossing‘s Villager/Isabelle were more than willing to spice up the roster.

Best Song: How many times are you going to make me say N64 Rainbow Road and Dolphin Shoals?

Best Course: Really, I’m not going to stop talking about those two tracks, so why don’t you visit my The Best 15 Mario Kart 8 Tracks article and we’ll discuss that game’s course design from there?

Final Thoughts: So uh, anyone else not care for Mario Kart Tour? That thing’s just shamelessly money-hungry.