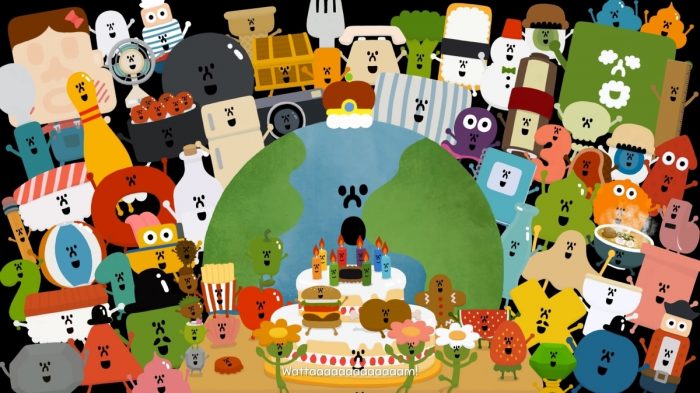 When Katamari Damacy first came onto the scene, I think we all knew something different — something unrelentingly silly — was happening. It quickly became my favorite game, its upbeat soundtrack juxtaposed to the random sounds of dozens of items being picked up and fused together to make a new celestial body. Katamari didn’t just inspire me; it gave me something to hold onto during some really dark times. I’ll forever be grateful for its supremely unique and supremely absurd fun. I’m deeply appreciative of the Katamari team and to Keita Takahashi for designing such a wonderful experience.

Years later, NOBY NOBY BOY continued that charming tradition, and I was head over heels in love with such a ridiculous title. I wish I could have spent the time playing NOBY NOBY BOY that I did with Katamari; the idea of everyone coming together to stretch the titular character to add length to GIRL in order to stretch to the Moon, Jupiter, Pluto, etc. was again that same silly fun I’d come to know and love. 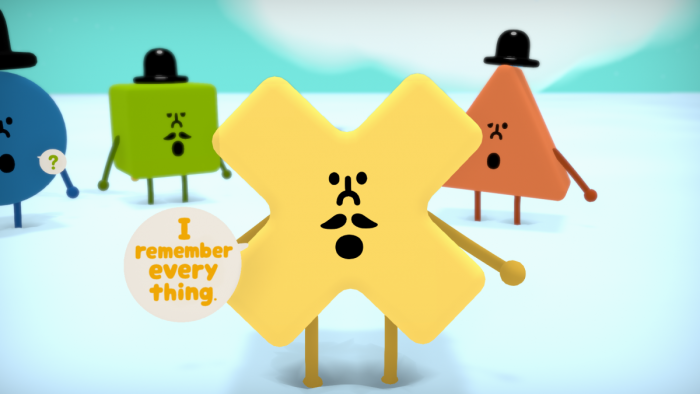 Do you remember what it was like to play at age four? If not, have you ever asked a four year old to tell you a made-up story? It often goes on and on, making unexpected-yet-somehow-expected twists due to their random view of their limited world.

Keep this in mind while playing Wattam, the incredibly sweet and pure story of items and their dynamics, of loss and love, of finding forgiveness and of being nice to each other. 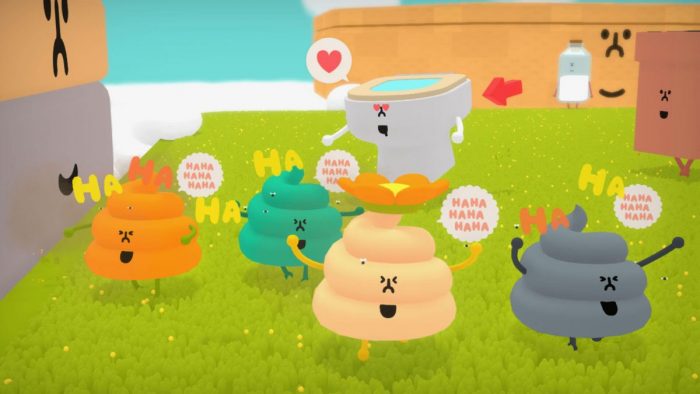 Developed by Funomena and published by Annapurna Interactive, players start out taking on the role of The Mayor, a green anthropomorphic cube. The Mayor is sad, because they’re all alone. Everyone was there and then suddenly no one was there! As players take control of The Mayor, they notice a small item fall from the sky. Upon closer inspection, they learn it’s actually a small anthropomorphic stone!

After chasing down their friend and holding their hand, another larger, anthropomorphic stone appears!

Then The Mayor learns their hat has a bomb underneath it, which is fun for everyone when they kaboom into the air! Then the sun appears, which makes their friend spotlight go away, so they all start crying.

Then they join hands in a circle and their crying makes grass grow, which causes white flower to appear, which then…

…remember how I said it sounds like a four year old wrote it? Yeah, it’s basically all like this. 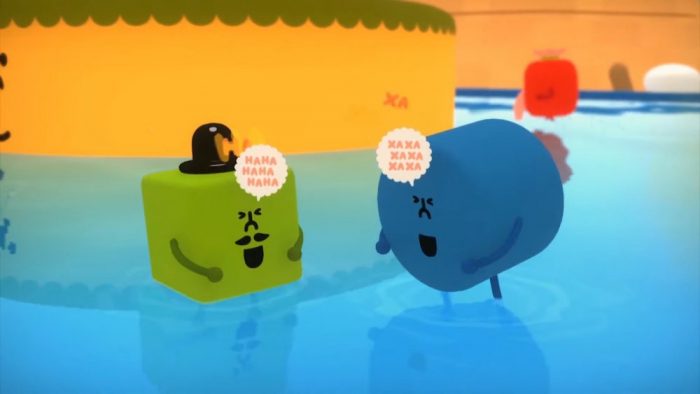 But that’s what’s so incredibly joyful about it.

I don’t know how else to explain it — Wattam gave me a piece of my childhood back that I thought I’d lost. The delightfully simple storyline focusing on basic emotions, such as the sadness of being separated or the happiness of being reunited, with twists that only a child would think up, such as everyone crying, then being happy about their friends joining them again, instantly transported me to my own childhood and how I’d play.

If it sounds like a game for children… I mean, maybe? But it’s far more about reliving a certain kind of nostalgia — one of feelings, storytelling, and way of thought — than it is mechanically toned down for a specific age. Playing through certain scenarios, such as stacking items as high as I could, reminded me of a conversation I had at age three with a babysitter where I asked if she’d stack my sandwich to the moon because I was VERY hungry. The way the characters would exaggeratedly run away in fear reminds me of a tall tale I told (again at three) where I said my grandpa was so scared of snakes he ran to his bed and hid under the pillows. It’s that level of absurd exaggeration that is only believable in a child’s mind is what’s featured here, and for those of us who remember this mindset, it’s a welcome trip down memory lane; a warm embrace from our inner child. 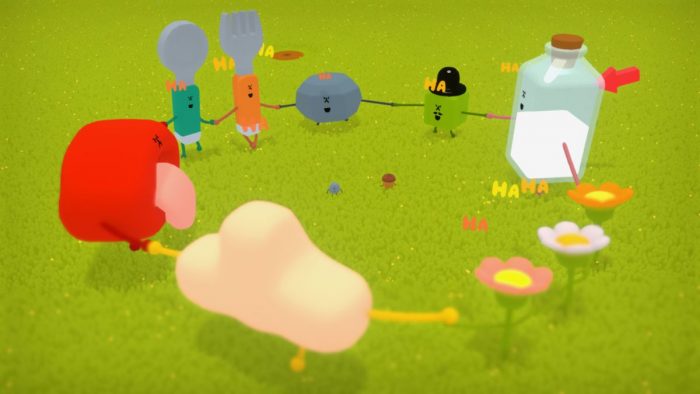 And then, around Act IV (Winter), the loose, overarching story starts to conclude, and something seemingly lighthearted gets incredibly heavy in, again, a simple way. We learn why everyone was separated, and we learn how everyone can come together again as a happy family. It’ll take forgiveness on the purest, most innocent and childlike level to achieve this, but without it, the world won’t be whole again.

The sudden swerve into a moral conundrum wasn’t what shocked me; instead, it was the way it was presented. Takahashi, the man who stepped away from video games to design playgrounds for children, proved that he truly is a child in heart with how he approached the concept of forgiveness. Players choose from one of four possible answers, none of them all that simple in comparison to the game’s overall feel, yet were valid ways a child might express themselves considering everything that just transpired. I was literally hit with a wall of depth in a game about taking control of noses, trees, and poop. 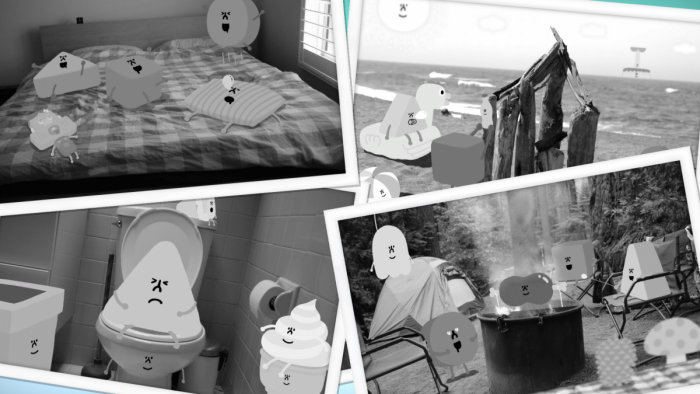 I highly doubt there will be another game like Wattam.

The peals of laughter that escape from the characters when “going kaboom”, the tears of sadness that flow freely when separated from a loved one, and the quick frustration of something being wrongfully taken — only to dissipate after a sincere apology — are so honestly expressed that I got to be a kid again through Wattam. Not because of some franchise that I enjoyed, mind you, but because these thoughts and feelings were ones we all had as kids. As adults, it’s easy to call back emotions like contentment, depression, or anger, but the childlike versions — happy, sad, mad — are all but forgotten. Through Wattam, they’re experienced again — if only vicariously through anthropomorphic cubes, stones, cones, and, yes, poops. 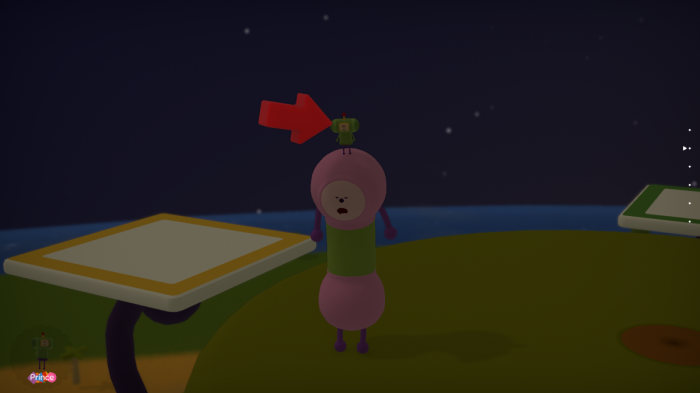 Despite nothing but positives, I find myself at a loss when it comes to recommending Wattam to someone.

On the one hand, a die-hard Katamari fan might enjoy this simply due to the precedent set by its ridiculous creator, but Wattam plays and feels so differently. And although I can certainly see children enjoying this game, it’s not necessarily aimed at children, either.

So who is it for?

Well, anyone, I guess, but keep an open mind and let Wattam tell you what it’s about. Try feeling your way through it instead of just playing it. And revel in its absurd storytelling as it takes you back to your own childhood. You’ll leave the game transported to a simpler time in your own mind. With no exaggeration, I know I finished Wattam feeling lighter, with a smile on my face and tears welling up in my eyes.

Wattam is one-of-a-kind and hard to describe, as talking about controls, storyline, and music — seeing it all in words — takes away the emotion and vision behind it. If you play through it with the mindset of collecting all the items and leaving it at that, you won’t get too much out of it; however, if you let your inner child take the reins, you’ll learn a little bit about who you are and how you’ve come to be. What a delightful game and a heartwarming experience. To Takahashi and the rest of the team, thank you — THANK YOU — for this unexpected exercise in true nostalgia. Kaboom!

Editor’s note: This review is based on a retail copy of Wattam purchased the reviewer. 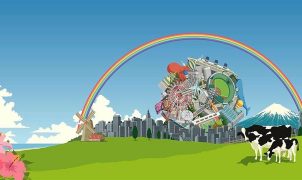