With Goldy Pond’s destruction, our ragtag group of escapee children — the stars of of Kaiu Shirai/Posuku Demizu’s The Promised Neverland, if you’re only just now catching up — are left pondering their next move. While Mr. Minerva’s shelter is gradually revamped into a loving new home, Emma and the gang — including their guardians in Yugo and Lucas — know it’s only a temporary haven, leaving them no choice but recompiling all the information and clues they’ve gained hitherto. Waiting for The Supporters is out of the question, and so Emma and her companions are left with no choice but to act upon Mujika’s cryptic hint: search for the Seven Walls. But can they find the answers in time before Peter Ratri’s personal army guns them down?

As is typical in shonen, the cooldown from Goldy Pond’s gritty gun-fight renders us prime for a lore-dump. As someone who criticized Volume 6 for getting a little too cozy with Sonju and Mujika’s hideout, this raised some potential warning bells — being a suspense story, the series succeeds best when weaving demon lore within its persistent, heart-pounding trepidation. Thankfully, Volume 12 commits this strength to heart — while this isn’t the most engaging Promised Neverland volume, the cast’s pursuit for answers never has the book tarrying on any one location for long, answering and raising questions veritable host of amidst a sea of tension.

Look no further than how it bookends itself: thrown headfirst into a grim flashback — a cruel reminder of Peter Ratri’s rule — we immediately shift focus to interspersed panels of armed soldiers storming an underground shelter and sleeping, defenseless children. A cunning fakeout — just as we’re expecting the worst, William Minerva’s cunning buys our heroes some time as they attempt to decipher the mysteries of Cuvitidala. Unfortunately, the determination of these professional killers eventually bears fruit, and by the volume’s end, we’re yet again treated to the full brunt of The Promised Neverland‘s man-eat-demon world in child casualties.

While this is hardly the first time the children faced off against human opponents, that this invasion presents immediate consequences renders it a far cry from the clash of minds that festered in the halls of Grace Field or Shelter B06-32. In merely observing the chilling speech Andrew drops towards the end (“You’re food. Your lives never existed from the beginning. It’s all an illusion.”), we instantly draw parallels to previous life-or-death situations —  the echoing of the demon who hunted down Ray way back in Volume 6 (“You’re merely food. Your opinion is worthless.”); the blatant hypocrisy and faux-perspectives decorating the battle with demon aristocrats in Goldy Pond (“One’s sense of values, or what’s beautiful, or what’s ugly, varies.”). On a surface level, the basic theme of “humans are the real monsters” is laid obviously bare; when tied to all-too-real themes of class warfare, it’s painfully relatable.

Have I mentioned how much I love Demizu’s art? 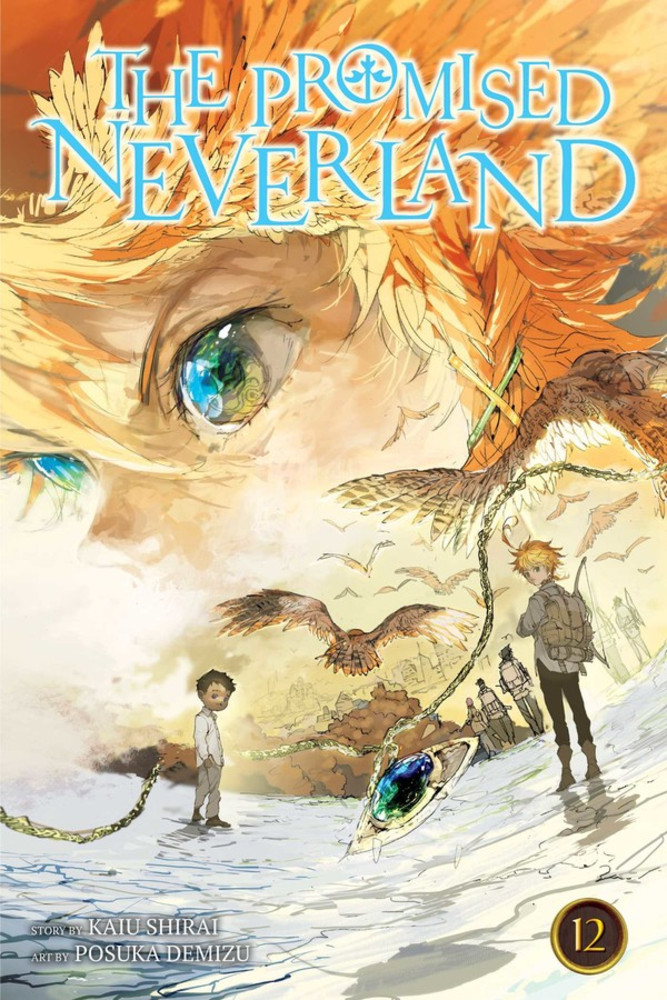 Hence why our most poignant source of humanity lies in a surprise guest: Phil. Following Emma and co.’s Grace Field breakout, her little buddy was promptly transferred to another ranch. Yet even with the handful of familiar faces bundled with him, he’s alone: being the only child bearing the farms’ deadly secret, he can only watch helplessly as one orphan after another’s shipped off for harvest. Let us, as we’re already forced to do, dispense with the suspension of disbelief that a four-year-old can process such dread, loneliness, and devotion to a cause — that, in his promise to Emma, he must maintain a vow of silence — and analyze how this sweet little boy is plainly not fine. His only means of “protection” of friends new and old is to maintain the fatal status quo, with his crippling isolation leaving him no other choice but to put on a mask and pretend he’s okay, quickly dispelling any ill-conceived notions of rebellion. Unlike the heartless Andrew, we know these children deserve rich, full lives of their own, but Phil might be the one true case of his rhetoric — in that he’s forced to a soul-crushing lie. (And hey, speaking of Andrew, should I mention the results of his encounter with Phil remains unknown?)

I’d talk about how this is all the more heart-wrenching with Posuka Demizu’s art, yet I instead choose to hone in on what a frightful figure she’s designed in Andrew. Oh yes, we’ve had other scary grown-ups like Mother Isabella, but merely observing this meticulous sociopath at work is a veritable visual case study into evil. When he’s massaging his jaw contemplating his next move, he is unsettling; when he stoically preps for another head-shot after murdering two pre-teens, we recoil from his apathy. Not once are we granted to another emotion other than the thinnest of determination; nay, this is an individual treating his child-slaughtering job as another exercise in pest control, with his chilling expertise paralyzing his prey into tearful, powerless silence. (Emphasized by his “greeting” Phil — a harrowing glare that induces shudders even around the surrounding, naive children.)

With the volume’s final page setting the stage for noble sacrifice, the phrase “things are gonna get worse before they get better” rings true more than ever for Emma’s band. The Promised Neverland operates on cautious optimism — one often sucker punching the children the moment they slink into complacency — but for as much as we know Emma will survive, we anticipate the next volume expecting the worse. Such is the modus operandi of successful suspense works, and as far as manga goes, nothing has yet to top Shonen Jump’s demon-ridden thriller.