What legends are made of 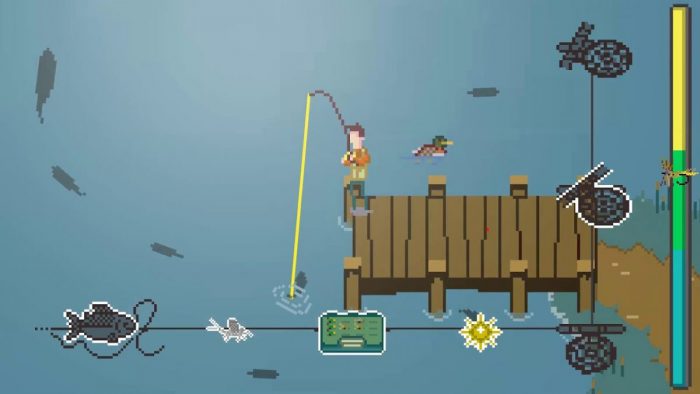 Honestly, I love the idea of fishing more than actually fishing.

While there’s a unique thrill to battling it out with an aquatic beast, that feeling only happens for like 5% of the time spent on the sport — the remaining 95% is filled with cold, wet boredom. Sure, there’s the beauty of nature, but nature is freezing and I’m more about my cozy, comfortable, warm bed. Now, if there was a way to get all the positives about fishing — the soothing sounds of the wilderness, the exciting moments when reeling in a catch, and the satisfaction of achieving something difficult — without all the negatives, I’d be about that life.

Turns out, that’s exactly what I got in River Legends: A Fly Fishing Adventure. 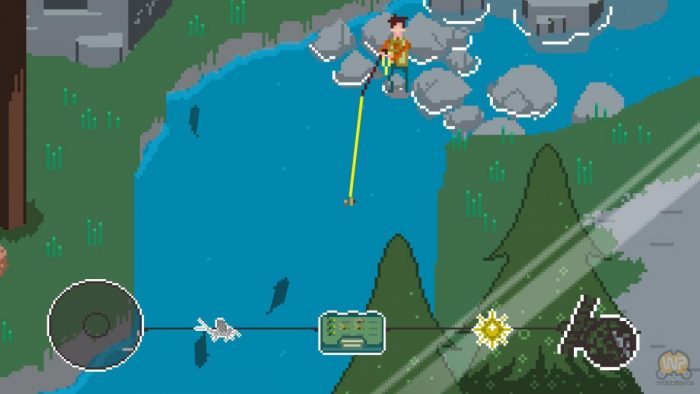 Developed and published by Dantat Studio, River Legends: A Fly Fishing Adventure, available on Steam, Itch.io, and Android, is a perfect pixel art rendition of fly fishing at its finest. Players take on the role of a fisherman as he explores the lakes and rivers (and sometimes caves) of picturesque Pine Canyon. Whether you’re looking for a calming, casual experience or to aggressively target trophy fish until the end, River Legends: A Fly Fishing Adventure has something for everyone — especially that inner angler.

The controls are simple — on PC, WASD or arrow keys control movement while the mouse does the rest of the work. On mobile, there’s a directional wheel to use for movement while tapping in the appropriate direction (or with the appropriate speed) takes care of the rest. Both platforms offer intuitive gameplay, but when it comes to catching bigger fish, it becomes more of an exercise in stamina and patience rather than a show of skill; however, that same stamina and patience are needed when reeling in a feisty fish, and the controls definitely expressed the thrill of the catch accurately. 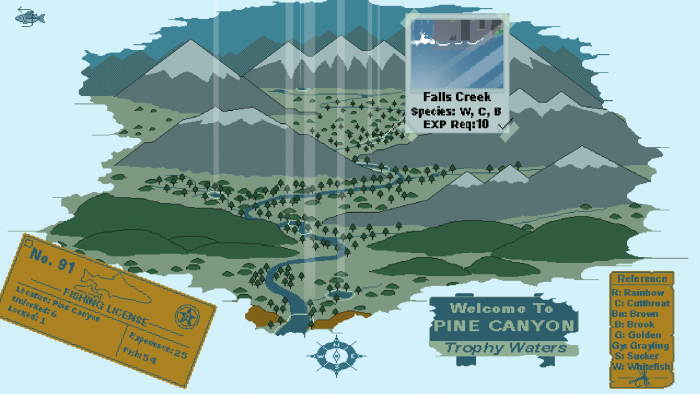 There’s more to River Legends: A Fly Fishing Adventure than just casting and catching — players will start on one of seven possible bodies of water. As players catch fish, they’ll have the option to release them, earning experience, or keep them, earning gold. The more experience earned, the more fishing spots become available; on the other hand, gold is used to buy important items from the shop, such as different types of tackle, sturdier fishing rods, and weather-proof gear. My advice? Collect just enough gold to get the tackle, rod, boots, and flashlight, then pour everything you can into experience. Once you do, you can go spelunking for gold in secret caves, a veritable shortcut in an already pretty short little gem.

By the way, you did read “spelunking in secret caves” correctly — in River Legends: A Fly Fishing Adventure, there’s fishing and adventure. Buying up the boots and flashlight will allow you to cross the rivers into exploration areas, where caves filled with surprises await. Some have gold, while others have rich histories in them. It’s good to walk around all levels to explore what the areas have to offer, despite only three or so having caves, because there’s a chance of seeing the biggest legend of them all: Sasquatch. Yes, the man/monster, the myth, the legend himself is hanging around Pine Canyon, eager to do a spot of fishing on his own. Stumbling upon him will yield not only a great story to tell, but an actual in-game trophy as well. 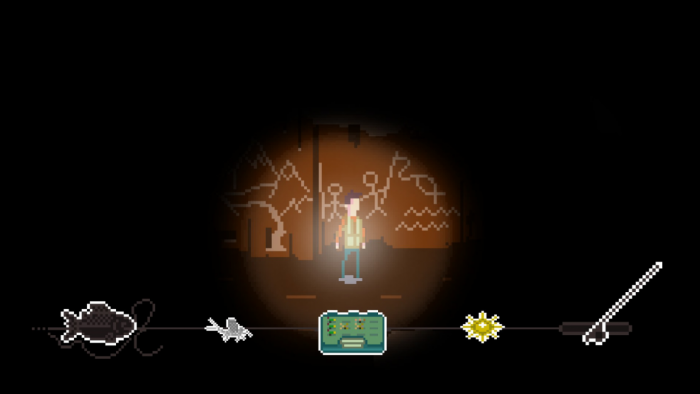 The graphics are obviously beautiful, but what’s surprising is just how immersive the aesthetic was despite the lack of realism. The water rippled whenever a fish bobbed its head up to bite at the lure, the raindrops fell gently from the heavens, and the fish slowly circled, round and round, through the crystal clear waters. The entire experience was one of serenity and peace, the calming colors and cheerful animation a resounding triumph in pixel art for the sheer fact that I was absolutely transported to Pine Canyon. Incredible!

Of course, the pixel art didn’t do that alone — hand in hand with the sound design, the overall feel of River Legends A Fly Fishing Adventure was divinely relaxing. From the opening song to the nature sound effects, everything was perfection. The dulcet twang of the banjo strings and the lullaby of running water, birds chirping, and rain falling instantly soothed me — so much so, that, while playing this in a crowded airport terminal, I felt virtually transported to Pine Canyon, immediately at peace. 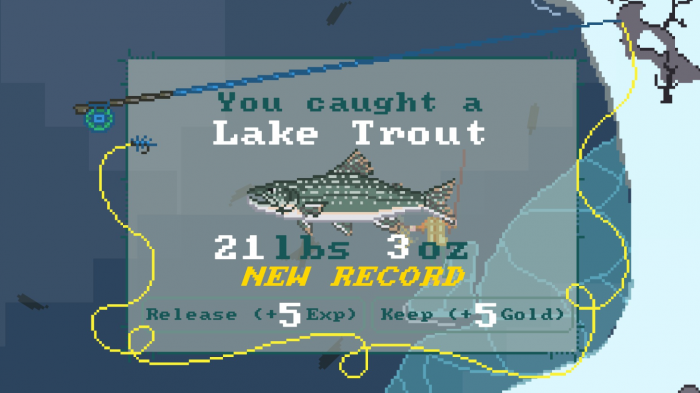 I was fortunate enough to be given a chance to review River Legends: A Fly Fishing Adventure on two platforms (Android and Steam), and I must say both of them have their pluses and minuses. My first go at the game was on an Android tablet, and while I feel it gives off the best experience in terms of tactile immersion, it does have some slight drawbacks. First, the game was not designed for my tablet’s dimensions, so some of the controls were cut off. I was warned about this beforehand, however (the game alerts you), so I can’t really give it a knock for that (if you’re wondering if the game will work on your device, grab the free demo to see for yourself).

My issue with the mobile version River Legends: A Fly Fishing Adventure — despite it being my preferred version if I could get it to work properly — was when it came to catching fish. Like the overwhelming majority of the world, I’m right-handed, so when I got a nibble on my line, I used my right hand to tap furiously. Unfortunately, this meant my right hand covered the bar off to the right that tells players their line is too tight or the fish is getting away. It was awkward to try to tap in such a way that didn’t cover up that bar, so I struggled a little at first. With that being said, I felt much more connected to the fish on my tablet, as if I was actually there in Pine Canyon perfecting my cast and reeling in records (which, as mentioned earlier, is saying something considering I was in an airport!). 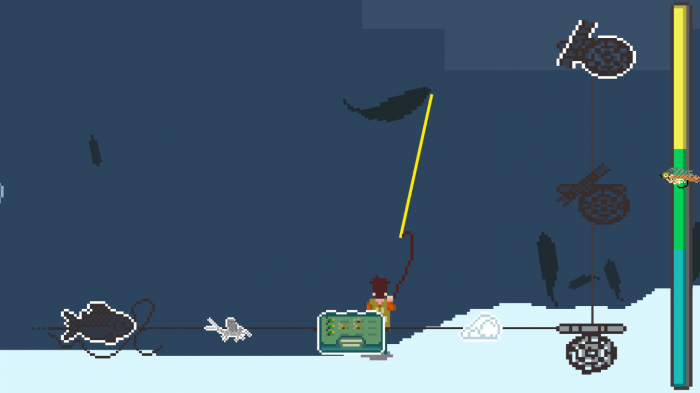 The Steam version of River Legends: A Fly Fishing Adventure is the one I ultimately played the longest, which was enjoyable in its own right. I think exploring the areas around the water was easier to do on PC — I can imagine getting frustrated wondering around looking for the secretive Sasquatch on a phone — and a bigger layout meant faster planning in terms of buying items from the shop and checking fishing records. Overall, the Steam version was a lovely experience and one I would still highly recommend (test it out for yourself with the free demo); I just wish I could truly take it on the go with me, whipping out the soothing sounds of Pine Canyon when I need a moment of zen.

When it comes to fishing, I’ll be the first to admit there’s a million other things I’d rather do before stomping into a cold, wet river and waiting for hours just for a nibble; however, River Legends: A Fly Fishing Adventure gave me all of the joys of fishing with none of the negatives attached. It’s calming, it’s challenging, and it’s definitely rewarding. This is the perfect game to pass the time on your phone while waiting in line or otherwise need to kill a few minutes; it’s also a great way to unwind from a particularly stressful video game or after a long day at work. If you even remotely enjoy video games and are looking for something different and wholesome, River Legends: A Fly Fishing Adventure is definitely a trophy catch.

Editor’s note: This review is based on two retail copies of River Legends: A Fly Fishing Adventure: one given to HeyPoorPlayer by the publisher and the other purchased by the reviewer.