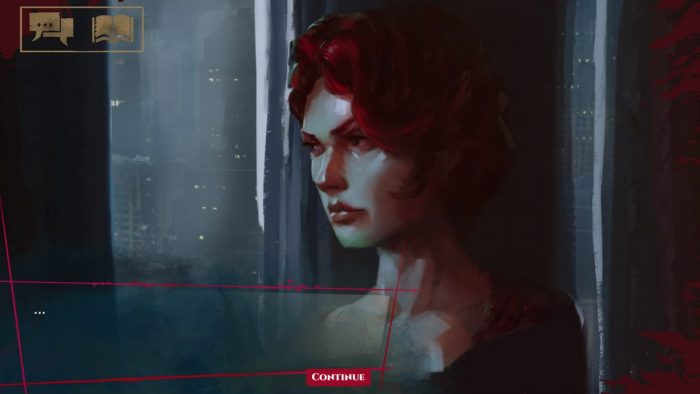 Take a look at your life right now.

Are you stuck in a soul-crushing 9 to 5 job? Climbing a career ladder to nowhere? Wandering aimlessly throughout life with no real friends or family? A literal wage slave — maintaining your body so you can transport it to the office to make money for someone else — only going home to rest and start the cycle all over again?

Now think about leaving it all behind.

Could you do it?

Would you do it?

In Vampire: The Masquerade – Coteries of New York, you’ll have no choice but to say goodbye to your daily grind forever when your time is suddenly up — it’s much more interesting in the afterlife anyway. 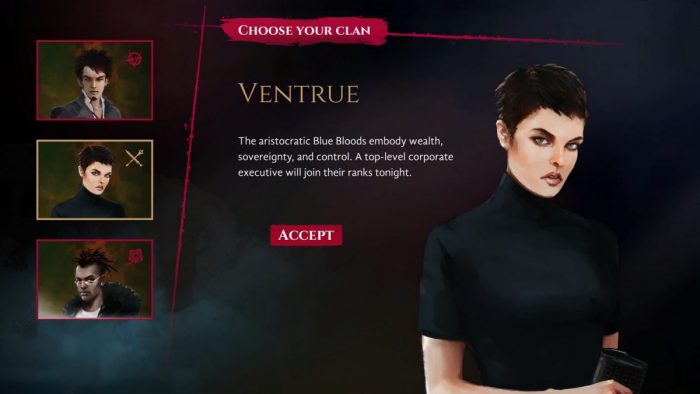 Only one way to find out — sink your teeth into this one and let it flow through you. 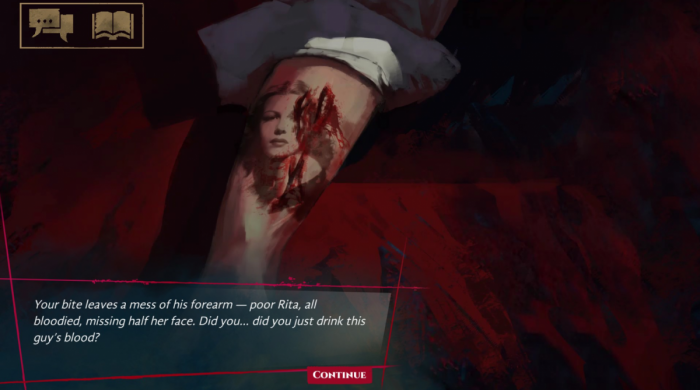 Vampire: The Masquerade – Coteries of New York opens up with the player choosing one of three possible characters; instead of character creation, like regular RPGs, consider this one as playing out a person’s life — and afterlife — story. Each character has a different personality, background, and, ultimately, comes from a different clan, so the replay value is certainly there in terms of experiencing the story through fresh eyes.

Although the characters have differentiating aspects, their stories play out similarly in the beginning — a spellbinding stranger lures them into a private place before turning them into a vampire, changing their world forever. They’re then escorted to a veritable ivory tower of vampires, where their fate becomes intertwined with a undead status-climbing socialite, Sophie, who decides to bargain for their life in exchange for your servitude. From then on out, it’s up to you to form your coterie, fulfill your mistress’ wishes, and avoid final death as you navigate your way through the convoluted yet captivating world of vampires. 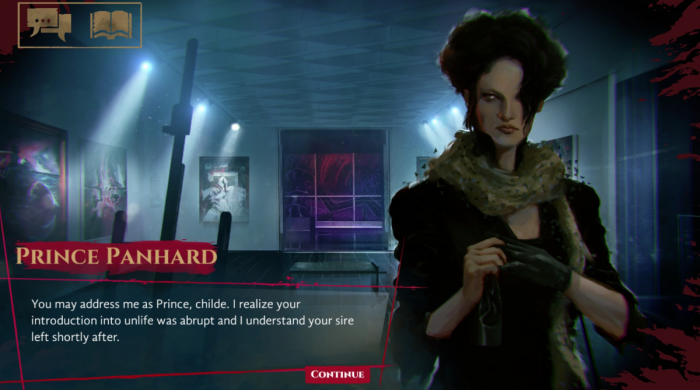 Right from the beginning, fans of the franchise might feel a little restricted in terms of storyline choices, as if the game plays a bit on rails. Considering the fact that this originates as a very flexible tabletop RPG, that makes sense, but it may come as a surprise to players expecting a wide-open world. For those whose first taste of the series is Vampire: The Masquerade – Coteries of New York, there’s no precedent set, so the hand-holding is not as noticeable. Either way, players are in for a scintillating story that encourages replay to fully appreciate the writers’ vision.

Speaking of the writing — it’s rock solid. I’ll admit that, at first, I was a little underwhelmed by how slow the pacing felt in Vampire: The Masquerade – Coteries of New York, but by the second night I was hooked. All characters — playable and NPC — have crystal clear voices that seem to jump off the screen and into your ears despite there being no voice acting. And although the branching storylines don’t always meet or make a lot of sense in the end, they’re in the very least enthralling. I was so dazzled by the writing, so eager to find out what happened next, that I found myself playing through one character’s storyline and immediately heading to YouTube to watch others’ journeys through the vampiric empire. 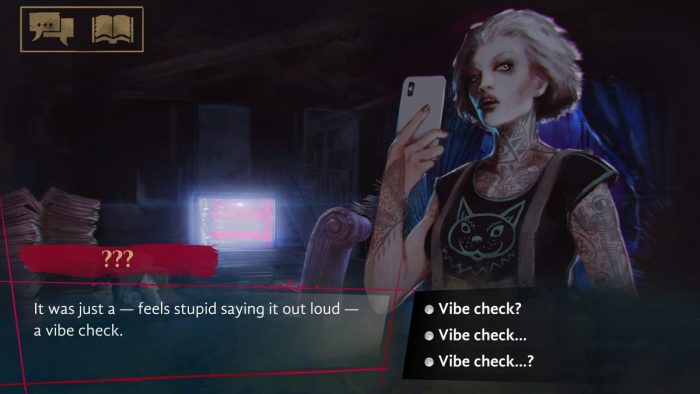 The aesthetic of Vampire: The Masquerade – Coteries of New York is what initially caught my eye about the title, and, despite the fascinating storyline, is easily the best feature of the game. The characters are GORGEOUS and the character design is splendidly on-brand. The characters themselves aren’t animated, but the exceedingly vibrant backgrounds are; some are breathtakingly beautiful, such as the gracefully moving waves of the Hudson River against the moonlit night, while others take your breath away for a different reason, like an occasional orphaned shadow passing through in the background. Where the vampires were dead, the city was alive and well; this was felt in every single painstakingly painted panel. 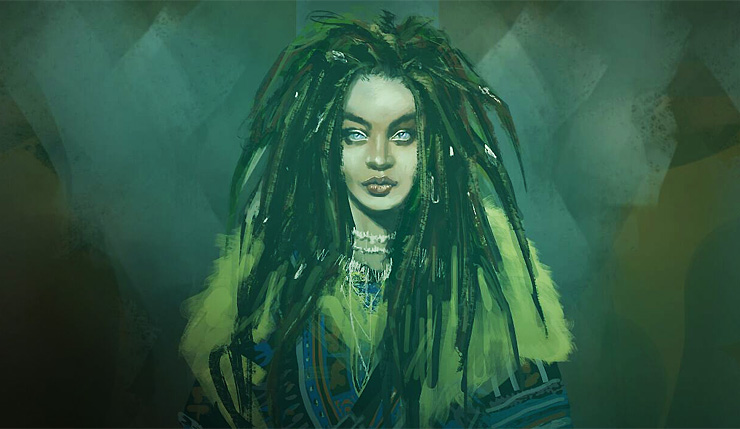 The art paired perfectly with the glorious music, and the only way I can describe it is through where it transported me. As I fell asleep listening to another player’s Let’s Play, I let the music take me to a rainy night in a coffee shop located in a sprawling metropolis. The smooth jazz was soothing, but between the people watching and the caffeine, I felt a slight buzz — there was something in the air, telling me I needed to keep my eyes peeled for movement in the shadows. Feeling ultimately in control of the situation, however, I let myself melt into the stunning scenery and settled in, soon dozing off. It was amazing to feel this way through the music, and I enjoyed it thoroughly. 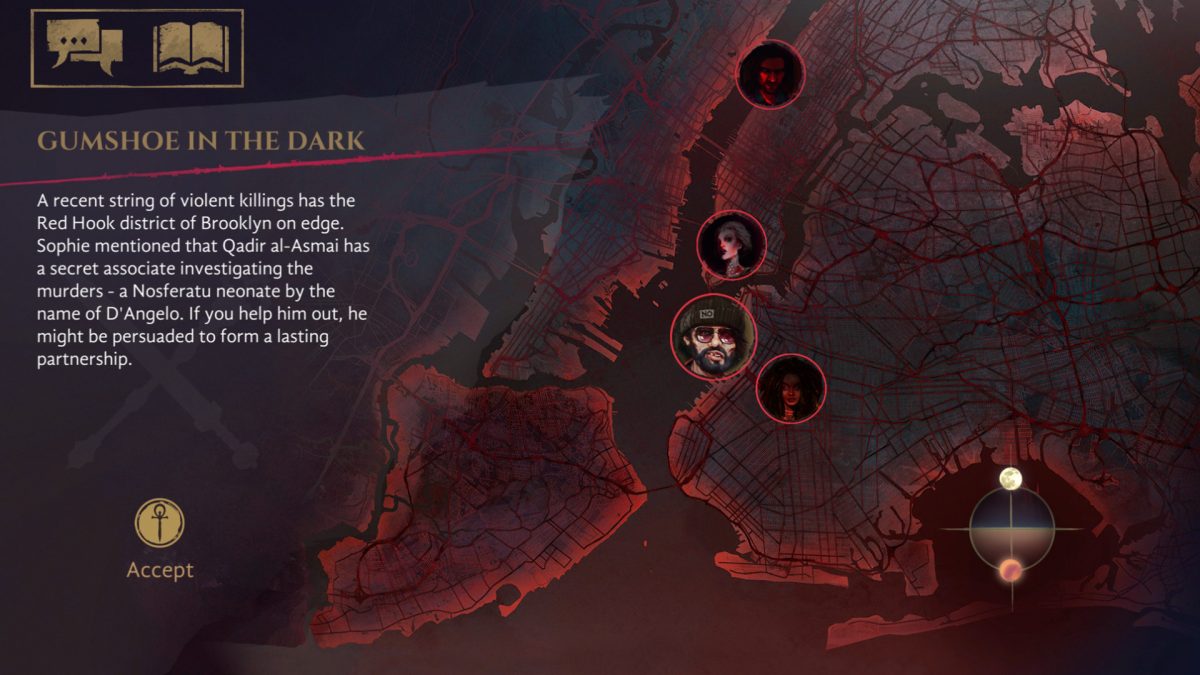 As I ravenously consumed Vampire: The Masquerade – Coteries of New York, I realized just how cohesive the entire experience was. The art, music, and story all blended seamlessly together, weaving an alluring storytelling experience that coaxed me into the world of vampires. I found myself embraced by its gritty yet graceful charm, the many tangled relationships between clans and individual vampires hinting at rich histories. It was clear that I was merely peeking into the window of a well-established world, and even though the entire experience was relatively short (one playthrough only took me four hours), I found many opportunities to springboard off certain story branches to possibly create my own. With enough imagination, Vampire: The Masquerade – Coteries of New York provides the perfect prompt for creative bursts of energy. 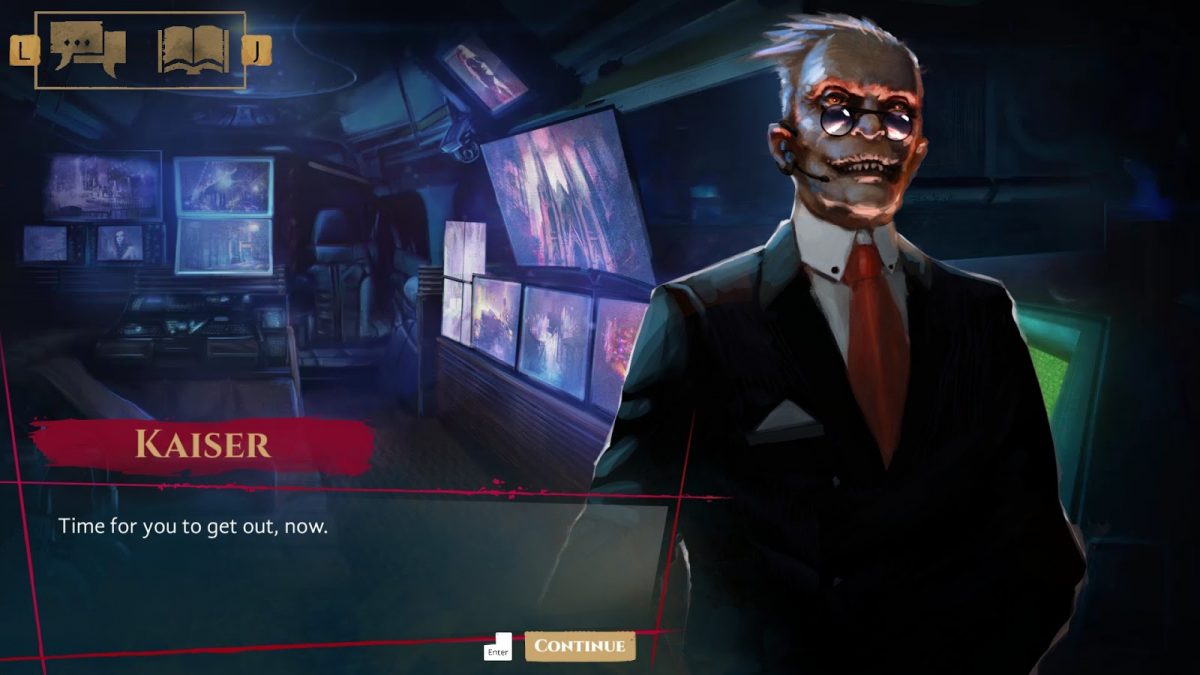 One complaint I’ve seen echoed in a few reviews is that the ending of Vampire: The Masquerade – Coteries of New York was somewhat of a let down, as, no matter what options you chose in any of your characters’ playthroughs, the conclusion was the same.

On the one hand, I see the frustration, as visual novels lend themselves to a sort of “choose your own adventure” type gamplay complete with different endings, but I feel compelled to remind players that, at the very beginning, one point was driven home more than anything else, and that was the concept of fate. The mysterious figure mentions they didn’t believe in fate until becoming a vampire, and that same conviction was repeated at the end. Much like Deltarune, your actions in Vampire: The Masquerade – Coteries of New York simply don’t matter — in the long run, all of your choices will culminate at a single point, leading to the same conclusion that fate has determined should be. Clearly, something was missed along the way for so many players to feel frustrated with this ending; however, I strongly believe this was what the dev team was going for, so I commend them for sticking to their vision.

I didn’t think Vampire: The Masquerade – Coteries of New York was going to be “my type”, but it was clear after an hour in that I had been embraced; an alluring storytelling experience, new fans to the franchise will find a short but sweet title that is sure to please. Veterans of the saga might feel perhaps a little letdown by the same things that the newbies enjoyed, but there’s so many peripheral aspects to bolster it that it’s all-too-easy to overlook the few shortcomings. If you have even the slightest interest in vampiric visual novels, Vampire: The Masquerade – Coteries of New York definitely belongs in your Steam library.

Editor’s note: This review is based on a copy of Vampire: The Masquerade – Coteries of New York given to HeyPoorPlayer by the publisher.