Science battles are upon us! 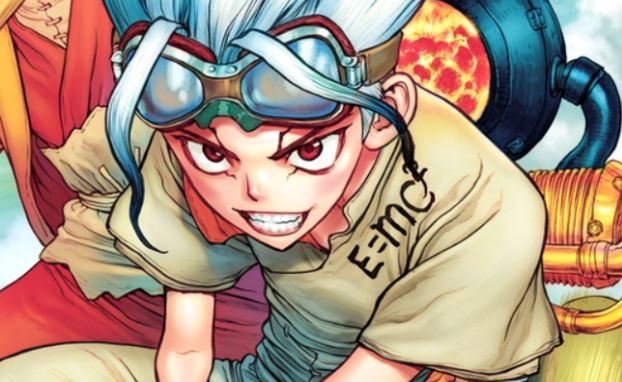 First thing’s first — if you haven’t yet observed my unworthy self bearing witness to Dr. Stone creators Riichiro Inagaki and Boichi (yes, really!) at last month’s AnimeNYC convention, please do so. While I sadly didn’t nab a much-coveted interview, I settled for the next best thing by painstakingly transcribing their Shonen Jump panel to the best of my starry-eyed fanboy ability. The mystery of what went down with the infamous cast switch may remain unknown, but nonetheless, I’d like to think their public discussion relays a fascinating insight into the series’ development and its application of science. Having followed Inagaki’s works since falling in love with Eyeshield 21 back in high school, I’m just happy my vindication in this opportunity allowed me to share my passion with Dr. Stone fans around the world. (And for fellow readers who’re just following the graphic novels or just came off from the anime’s first season, fret not: aside from fleeting references to the current setting or an invention or two, there’s no spoilers to tiptoe around.)

Now, where were we? Ah, yes, Dr. Stone Volume 8. When we last left off, our Stone World scientists had created not one, but two prehistoric cell phones for the purposes of waging information warfare. With Tsukasa’s eagle-eyed goons watching their every move, we’re clutched by suspension unseen in the series hitherto as allies are captured, pursuits are unleashed against pursuits, and infiltration teams sneak about for the purposes of establishing contact between Ishigami Village and a certain pair of spies — Senku’s long-absent friends in Taiju and Yuzuriha. Not that we’re subject to any left-field tonal shifts — the series’ trademark commitment to scientific breakdowns and Boichi’s wacky expressions are as heartening as ever — but this volume wastes no time in shifting the gears towards the Stone Wars with its opening chase.

That this battle for Earth’s future rests between the convergence of Dr. Stone‘s dual identities  — the lovable edutainment saga of science vs. the ancient leftovers from a stumbling new shonen — may induce trepidation among readers comfortable with the comic’s current direction. And why wouldn’t they, what with the series firing on all cylinders since Kohaku and Chrome proved themselves superior foils to Senku’s modern intellect? Bland as Taiju and Yuzuriha may’ve been, however, we knew Dr. Stone couldn’t just leave them languishing in the background forever, and their heartfelt telephone reunion shows we have nothing to fear, what with their respective strategizing gaining a new comrade in Nikki. Admittedly, this does involve Taiju and Yuzuriha stepping back and let Senku and Gen’s theatrics do their thing, but the former’s heart-of-gold pacifism’s an encouraging sign he’ll maintain a special role for Dr. Stone‘s future. 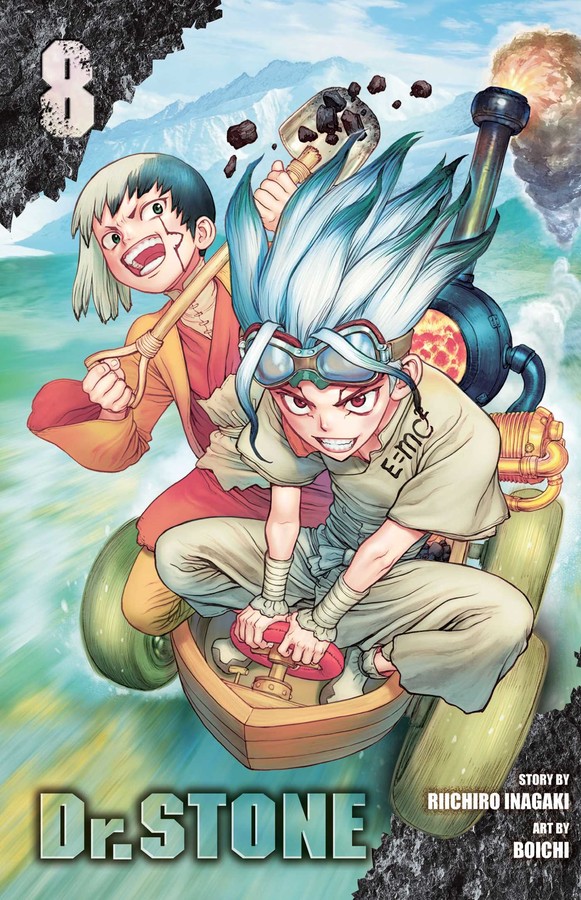 Whether the same can be same of this almost-but-not-quite-girlfriend remains to be seen, but that’s a discussion for another volume; point is, I welcome their return so long as they bounce off the cast accordingly and maintain some relevance. Even so, I’ll doubt Taiju’ll override the boon Chrome’s been to this series —  even with Homura out of commission and Nikki turning over to the Kingdom of Science, Tsukasa’s hardly out of capable warriors, and our budding scientist finds himself a prisoner within the nefarious high schooler’s lair. Dr. Stone isn’t content with Tsukasa and co.’s presence simply scheming behind the scenes and letting the big bad’s minions do all the dirty work; nay, Chrome’s kidnapping establishes not merely enforces Tsukasa’s active presence, but the ensuing spine-chilling confrontation illustrates a clash of ideals long since gestating: a rustic proponent of progressive science to an totalitarian survivor of an apocalyptic world, to whom careless littering is as destructive as nuclear war. (This isn’t even getting into Ukyo: a meticulous sniper whose unclear designs are an enticing lead into the next volume.)

That, and well, there’s the matter of our hapless rustic chemist further digging himself in his, uh, “persuasion” regarding the wonders of science. (Sadly, “lemme tell you about rainbow flame reactions” will impress no one but cavemen.) As mentioned before, all this strategizing and villainy doesn’t mean Dr. Stone‘s trademark edutainment’s off the table, what with all the cell phone placement, paper shields, tracking powder, and yes, the Stone World’s very first motor vehicle. As always, Boichi’s passion for Inagaki’s work bleeds into every panel, be it decorating Senku’s paper plan with a playful visual metaphor or the wily glee as Gen dons his Lillian Weinberg impersonation. Even when disaster looms ahead or when we’re wrapping our heads around scientific how-tos, Dr. Stone prescribes nothing but distilled concentrations of fun.

The Stone Wars are finally upon us, and we exit the prelude that is Volume 9 with but heart-pounding anticipation. Dr. Stone is certainly no stranger to hot-blooded shonen action, yet its unique spin on edutainment instills nothing but confidence in whatever uncharted territory it’ll venture into. Whatever stumblings it’s had in the past, Taiju’s seamless reintroduction here only further proves any dynamic shifts in story are long since behind us, as Dr. Stone has, indeed, settled into stone.

Next Up Hero Review (PC)

Ghosted     I’ve always been a little hesitant when it comes to playing community content-focused games. Games which, rather than focusing on the content which comes with the…