Plus Ultra? Not quite. 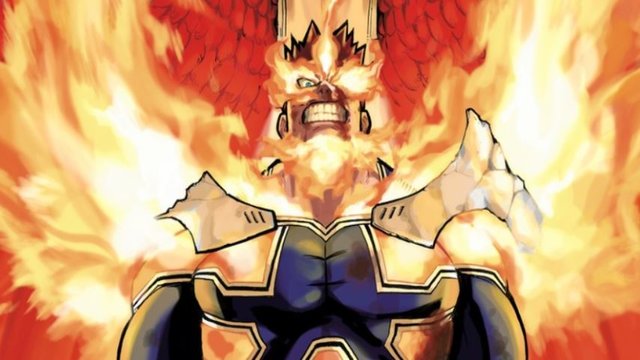 Let us step back for a minute, and define the word “endeavor”: “to exert oneself to do or effect something.” There’s certainly no shortage of heroes in My Hero Academia we could apply that verb to — not the least in our aspiring overachiever in Izuku “Deku” Midoriya — yet throughout the entirety of Kohei Horikoshi’s shonen hit, none have adhered to ideals more unethical than the professional bearing said word as his name. With Endeavor’s ambitions being dashed to pieces following All Might’s retirement (y’know, what with raising Shoto to surpass the world’s greatest hero), his “manufactured” son shrugging off said dream (and by association, him), and abusing and neglecting his family for the sake of meticulous eugenics, him attaining the role as No. 1 hero is a sour taste for not just the Todorokis, but us readers who’ve followed their family drama since Volume 5. From that angle, Natsuo — who reasonably maintains a bitter grudge against the gruffy, imposing mountain of flame — is our vessel whenever this storyline rears its ugly head. (“The world still doesn’t know the truth about you. About our siblings…about how he’s always treated our family.”)

While we’ve since seen the seams coming apart — recall Endeavor’s discussion with All Might regarding being the Symbol of Peace, and his resolute declaration to Shoto —  it takes an unlikely partnership between him and genius hero Hawks for him to face his resolution head-on. Elusive and unpredictable, we’re left just as clueless as Endeavor regarding the young prodigy’s motives in this post-All Might era…that is, until a familiar villain enters the picture, and we’re left to confront yet another grisly side of herodom’s underbelly. But as opposed to Endeavor’s self-serving goals and discarded “failures”, this is one character that’s instantly repulsed by the commitment he undergoes for society’s sake; in other words, one gets himself dirty for the sake of others, whereas the other commits to cruelty for his self-benefit.

A parallel that’s put to the test with a bloodthirsty, upgraded Nomu. Between the faith bestowed upon him in the infamous “Can’tcha see?” kid — a fantastic echo to an earlier scene from the previous volume, where we first saw him deny a more friendly Endeavor — and him embracing the school’s “Plus Ultra” motto in his finishing inferno, it’s the first time Endeavor truly, well, “endeavors” to achieve heroic selflessness; really, what further proof do we need than his new souvenir in a grotesque scar? Whereas one could raise legitimate concerns in the series romanticizing his resolute atonement — his estranged wife’s comments from the previous volume do skirt a little too close to Stockholm Syndrome — that Horikoshi delicately juxtaposes the relationship between his duties as a hero to his failures as a parent successfully sets the stage for further diving into the consequences of herodom’s dark side. (As we’ve just seen in recent chapters, but I’ll keep quiet on that for now.)

Of course, what’s My Hero Academia without Deku? The poor guy’s been having some unsettling nightmares regarding One for All’s origins and the former big bad in All for One. We meet up with some old friends in the Joint Training Battle, wherein our protagonists in Class A face of against Class B’s misfits in pompous Monoma, sisterly Kendo, and saintly Shiozaka. Along for the ride is Shinso, whom you may remember as the brain-washing cynic Midoriya bested in the Sports Festival; another aspiring hero who, despite his awesome ability, establishes a fascinating parallel with our freckled cinnamon roll in being born with a Quirk, yet the ensuing stigma surrounding his manipulative powers roadblocks his heroic dreams.

I only just noticed Hagakure there — fitting! 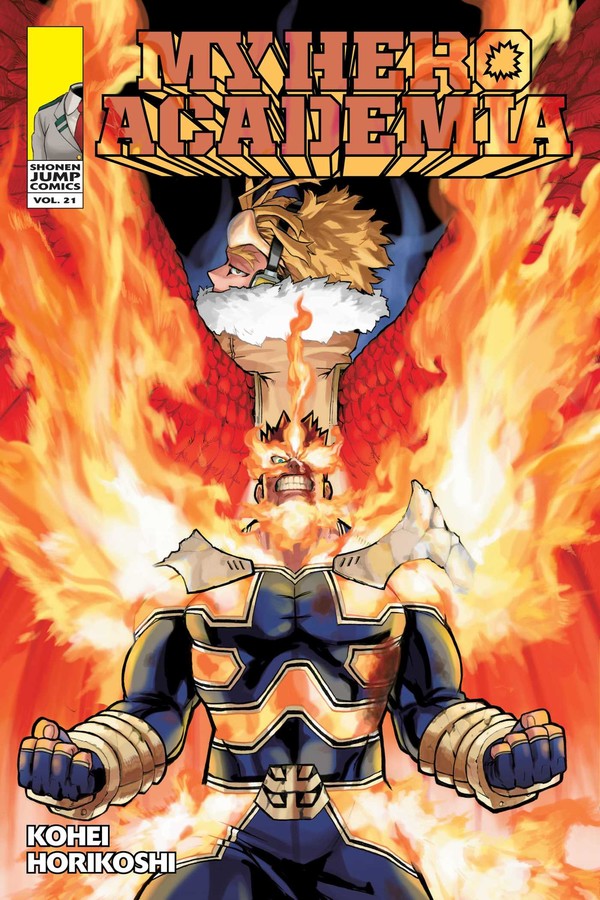 Between Deku’s nightmares and Endeavor’s struggles, all this is well and good character development and foreshadowing…albeit all offset by this volume’s latter half. See, it’s here My Hero Academia falls into an unfortunately predictable rut where *every* single battle and character is highlighted, deluged with multi-page monologues and chapter-spanning flashbacks. I complain about this knowing full well that a) The Joint Training Battle couldn’t just lazily replicate the Sports Festival’s grand public scale, and b) this is the inverse of what I’d previously noted about the series — that its snappy pacing, while beneficial and to-the-point, tended to glance over certain characters/events — but while I’d been itching to see Class B and Shinso again, that their latest clash impedes the series’ treasured pacing is hardly ideal.

I’d even say it’s enough to instill some disinterest in the battle-and-capture games rampaging here, although that’d be a disservice to  Horikoshi’s ever-inventive application of Quirks — not the least in Class 1-B’s Manga Fukidashi: an aptly-named hero whose panel-shaped head spews literal onomatopoeia. And hey, critics of this arc like me can’t complain about Shinso — while Yaoyorozu’s primed up as Class 1-A’s current representation of development, the brain-washer that could’s the one stealing the show in his playing both sides. How this special treatment will develop alongside Midoriya’s development as a hero remains to be seen, but I imagine its relevance will be this arc’s saving grace.

Despite its best efforts, we exit My Hero Academia Volume 22 with uncertainty. During this arc’s serialization, I could definitely feel myself tapping out in its momentum-killing pacing — while I’m open to a condensed manga format easing myself into a forty-minute read, that the next volume’s nothing but these fights induces a dread akin to that of One Piece‘s never-ending Big Mom chase. Whether Midoriya’s vestiges are accurately maintained throughout will be the key — can our young hero endeavor himself to save my attention?