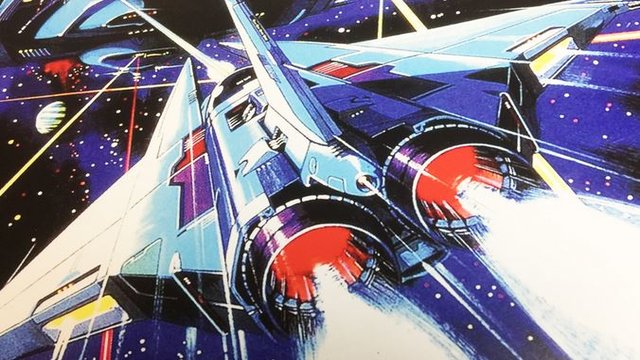 Today’s review is based upon the original arcade Gradius included within the Switch version of Konami Classics Anniversary Collection.

My fellow 8-bit compatriots, it’s time I come clean: I am a filthy, dirty cheater. When I started this column, I knew I’d come across ancient game unabashedly merciless in their capitalist-driven hunger for currency, yet I still took comfort in modern convenience; after all, that I’m experiencing these arcade classics at home, often equipped with quality-of-life features in save states and whatnot, means I’ll never go bankrupt on pocket change. But alas, their relentless difficulty endures, and much as I resist the save state temptation for the sake of authenticity, the thirst for knowledge and the impending, looming threat that are “deadlines” threaten to leave me with no other recourse.

And now here we are with Konami’s Gradius — or its original localized name in Nemesis, if you prefer — finally forcing me to enact said recourse. Twinbee, the previous Konami shooter we covered, was difficult, but never battered my willpower with hopeless torment. Little did I know Gradius upped the ante not even two months later after that game’s release, wasting no time in its relentless pursuit of leaving me a quivering, brutalized mess. Really, if the phrase “a picture’s worth a thousand words” was never once applied to 80’s shooters, then this Gradius screenshot should prove itself a succinct inaugural. 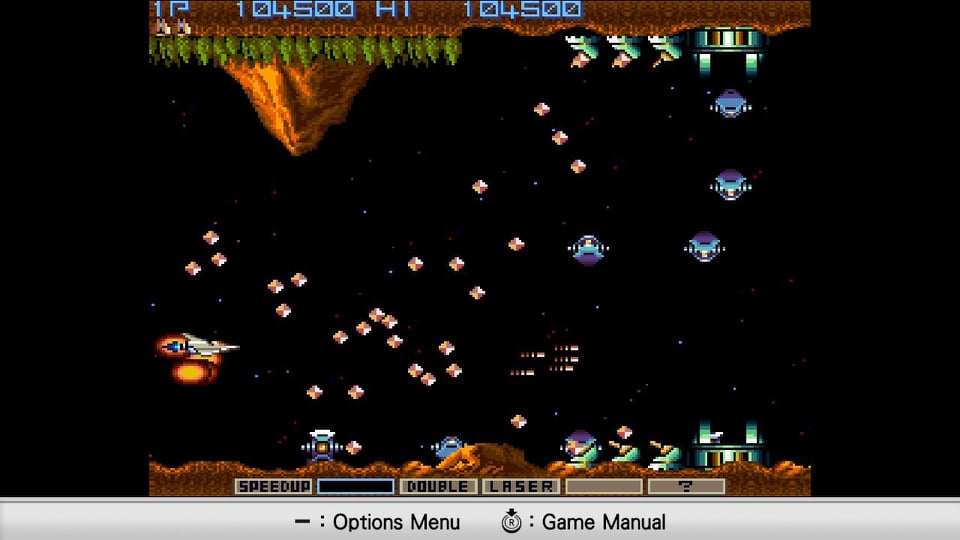 Not even a week after starting my month-long trip into the stars, I succumbed to Gradius‘s unforgiving bullet hell and, in a mad fit of desperate hysteria, sought sanctuary in the Konami Classics Anniversary Collection‘s save-state feature. Every time the Vic Viper — the Gradius world’s flimsy beacon of hope, doomed to fall with only one shot —  was inevitably gunned down or crashed into a ceiling, I instantly booted my latest state and reset to moments before I met my untimely demise. Already, I hear your jeers, your dispiriting boos — not the least, I assume, from living, breathing relics of arcades past, who’ll proudly elaborate on how they successfully navigated Gradius‘s seven stage gauntlet through blood, sweat, and a bucketful of quarters.

Rather than scoff by countering with a cynically bitter “well, hey, at least I didn’t routinely waste my allowance on games programmed to siphon as many coins as possible”, I choose to instead reflect on our motives; namely, why am I doing this, and why did they throw away their quarters? As boss-man Francis warned me, Konami’s collection of 80’s arcade games are among some of the toughest arcade classics, and I’m not about to contest that consensus — its third stage alone in a Moai maze was a brutal exercise in torture, with its vertical loop-scrolls instilling panicky claustrophobia prone to premature deaths. (As seen below — witness my shame!)

This has been my hellish pre-bed ritual for the past four days. The things I do for researching 80's gaming. #Gradius #Nemesis pic.twitter.com/6P85mj3mjI

Much like Twinbee, Gradius operates on the theme of collecting. As opposed to shooting bells, however, we gather pick-ups that allow any one specific power-up, be it acceleration, weapon selection (lasers, missiles, or double-shot), a shield, or an accompanying “Option” — a tiny laser-spewing ship. Accumulating into a capable star-fighter, our newfound prowess is put to the test as we juggle between deliberating power-ups on the fly as we dodge enemy bullets and return fire. It’s not long before we transform into a spatial whirlwind of death, giddily executing a spectacular 8-bit fireworks show. Flooding the screen with countless explosions and bright colors, this stimulating feedback loop instills a superhuman high regarded as one of shoot-’em-up’s best.

A fleeting joy that, sadly, literally comes crashing down the moment we’re felled by so much by one bullet. Yet again, the key to Gradius‘s addiction lies into punishing ourselves for our inability to perform a perfect run. Putting it this way: we strive to relive that shooting-frenzy high, and with improvement being our only approach, Gradius rises to our challenge accordingly via its gradual difficulty — you have to master not merely the Viper’s navigational and firing abilities, but stepping outside our comfort zone and taking a pragmatic approach in deciding which power-ups provide the highest means of success. Note the game’s subtle method of encouragement — whereas the curious space settings may seem dark and gritty, the opening musical prelude to each level is an uplifting encouragement encouraging us to try our best. Can you believe this instant nostalgia bomb, one that inspired Yuzo Koshiro of Streets of Rage fame, was composed by a 17-year-old prodigy?

Of course, one could (justifiably!) say my contant save states defeated the purpose here; as seen above, that the final boss went by without so much as a whimper may be a testament to that. I know I shouldn’t feel guilty — save states are ubiquitous in retro game collections for a reason — yet in such an experimental game such as this, I can’t help but feel I violated some sacred 8-bit commandment. Let’s be real here: I can hide behind the “noble pursuit of history” excuse all I wish, but I coveted only power; in the end, I replicated a GameShark run as opposed to authentic 1985 trial-and-error all for the sake of maintaining dominance.  If nothing else, I’m grateful if only in that I recognized the game’s tricks — a preview run, if you will — for more ardent, genuine attempts in the future.

So where would one as hapless as I start? Well, much attention has been directed towards Gradius’s unique visual identity — not the least in the caves we spelunk and the aformentioned Moai mazes dooming many an arrogant pilot. But much as all this feeds into young imaginations, how do they feed into gameplay? Gradius‘s predecessor in 1981’s Scramble — Konami’s first shoot-’em-up attempt; actually, Gradius originally began as Scramble 2 — and observe how it’s often cited as the first horizontal shooter with distinct levels. Many claim Gradius is the first shmup where level memorization is a vital gameplay component; from that angle, the game’s captivating aesthetics are but a springboard into successful play. (In other words, don’t marvel too long at those boulder-spewing space volcanoes.) 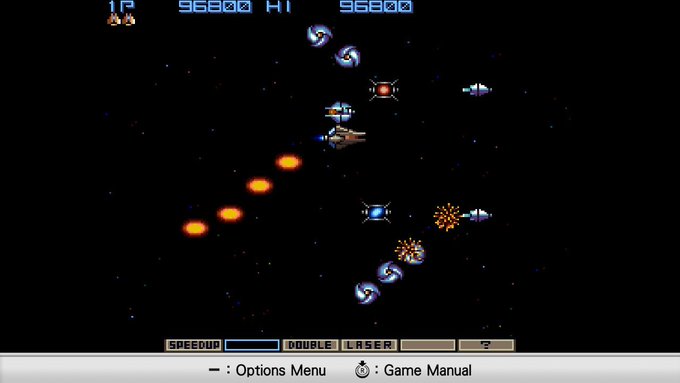 Much to my surprise, the Konami Classics Anniversary Collection was generous enough to include both American and original Japanese versions of all included games. It’s been said Gradius‘s Japanese version’s easier than the American counterpart, but while the placebo effect may fool me into thinking otherwise, there’s a distinct check rendering that moot — there’s no continues! Even if the Japanese version may play more mercifully, that it’s offset by such merciless punishment means you’re stuck in bullet hell either way. Tough luck!

Naturally, there were no shortage of Gradius ports at the time — while we could elaborate on any number (as noted by Hardcore Gaming 101’s analysis, the MSX version’s graveyard level and its cleverly-hidden Twinbee two-player character renders it a highlight), most are familiar with the 1986 NES version; yes, it keeps the original name as opposed to “Nemesis.” While this port features some typical downgrades (namely graphics and sound — check out how the boss ships are significantly smaller), the hard-as-nails difficulty’s intact, and a two-player mode where players alternate between lives is also included; sadly, I’ve yet to find a fellow pilot to tackle it. By the way, did you know this port was the first instance of the infamous Konami Code? Remember: press the famous combo of Up, Up, Down, Down, Left, Right, Left, Right, B, and A to earn a beefed up ship!

Indeed, both NES and MSX paved a rather wide road for Gradius‘s legacy — for one, there’s Gradius Archimendes Hen, a Japan-only Famicom game that was yet another cynical promotional food tie-in, wherein all enemy fighters are malicious ramen bowels. And as elaborated in GamaSutra‘s fantastic Gradius retrospective, there’s not one but two satirical spin-offs in Parodius, a tongue-in-cheek parody proudly presenting bizarre imagery alongside innumerable Konami cameos, and Otomedius, a moe-inspired shooter featuring questionably-clothed girls. (And in case the latter looks familiar to you, no, it’s not just because the art design’s by Mine Yoshizaki of SGT Frog/Keroro Gunso fame — it’s that infamous anime shmup from Konami’s mind-numbing E3 2010 conference) And yes, I made abundant references to the Moai statues for a reason — in cementing its identity as Gradius’s most iconic visual imagery, Konami loved the Easter Island statue so much it made countless appearances in other Konami titles, not the least in its own game in Moai-kun.

While the famous “Shoot the core!” phrase was introduced in 1988’s Gradius II, it’s no secret the shmup genre’s omnipresent phrase was born here in the game’s Big Core bosses: colossal warships ominously concluding each stage, preluded by an intense bout of enemy fleets — an all-or-nothing ordeal testing everything we’ve learned. In swiftly dodging the big bad’s laser volleys and firing away at the barricades shielding their illuminated orb-powered cores, we witness not the deliverance of the genre, but the stirring evolution defining generations of shmups to come. Blowing stuff up — what’s not to like, even when Gradius pummels our willpower into space dust? 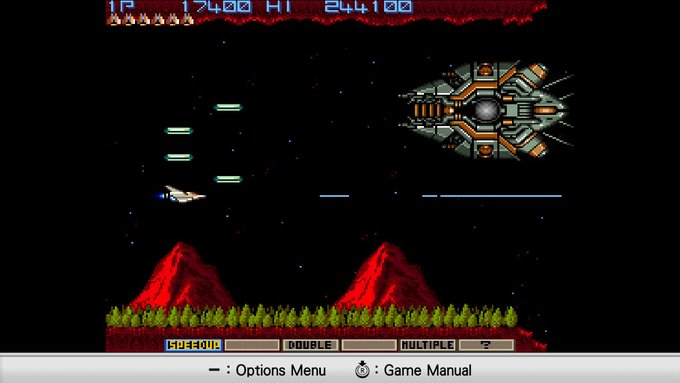 You know what they say… 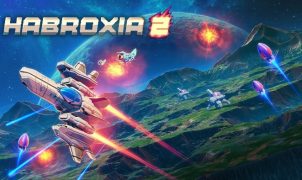