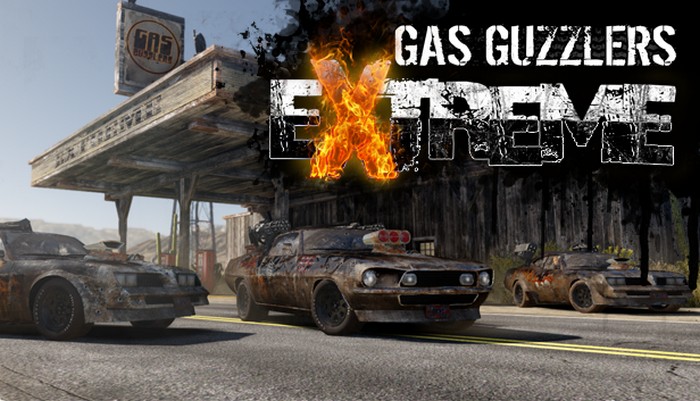 Gas Guzzlers Extreme feels like a product of gaming’s distant past. From its chunky and generic guitar riffs and one-liners borrowed from Duke Nukem that accompany the on-screen carnage to its roster of racers with such edgy names as “Jaques Strap” and “Mary Juana”, it’s a game that would have felt right at home in the era that brought us Beavis and Butt-Head, JNCO Jeans, and the bloody, high-octane antics of 1997’s Carmageddon.

Now don’t get me wrong: I’m not immediately turned off by games that aim to offend. As a teenager, I spent plenty of time blasting murderous hillbillies to bits in Redneck Rampage or laying waste to my foes with weaponized phlegm in Boogerman: A Pick and Flick Adventure on the Sega Genesis. Had this game released back in the late ’90s, Gas Guzzlers Extreme likely would have been a smash hit. However, it takes a lot more than a piss and vinegar attitude and gross-out humor to appeal to players these days. And with its anemic selection of modes and glitchy gameplay, this arcade-style combat racer from the folks at Gamepires is running on fumes. 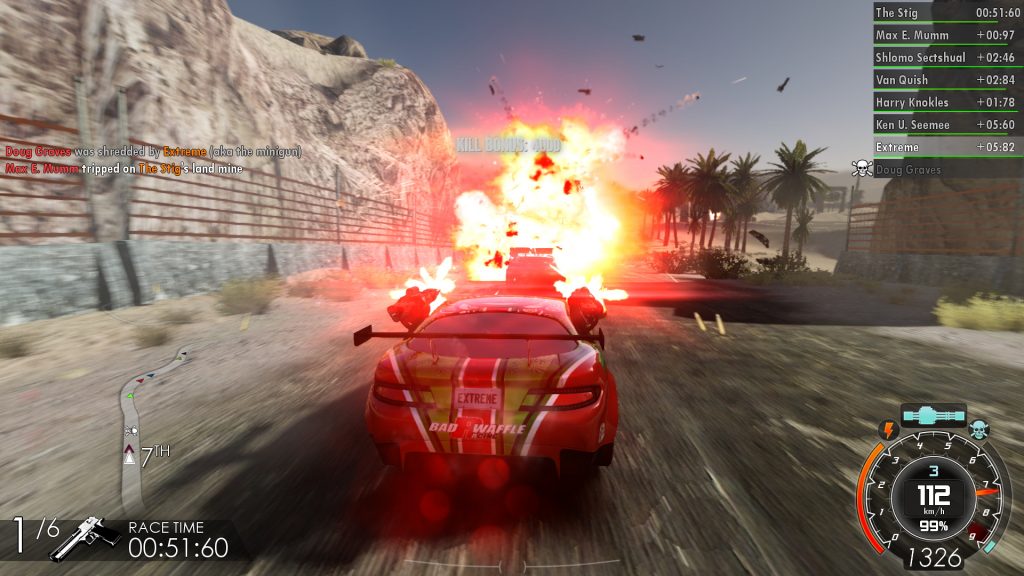 The heart of Gas Guzzlers Extreme is its career mode. Here, you’ll have to compete against the pack in various race types across over 40 tracks to climb to the top of the rankings. Upon starting the game, you’ll only have a junker to drive. However, as you win races, you’ll be able to purchase nearly 20 vehicles, which you can customize with your winnings to improve their engines, nitrous, armor, brakes, weaponry, and more to give you a leg up on the competition.

Gas Guzzlers Extreme features several different race types that you’re free to choose from as you progress in your career. There are standard races where you’ll have to rely on your racing skills rather than your guns to reach the finish line, while others will allow you to unleash hell on your opponents with a variety of weapons, mines, oil slicks, and the like. Of course, finishing a race in the top three is always good for your rankings and your purse. However, you’ll often have side objectives you can complete, such as destroying a particular racer’s car or successfully hitting a certain number of targets with mines to win a hefty chunk of extra cash.

As you climb the leaderboards, new sponsors will approach you with opportunities to perform in special events. These can come in a variety of forms such as deathmatch, capture the flag, and even a zombie horde mode. These do a great job of spicing things up and can be pretty addicting. The only problem is they feel perfectly tailored towards multiplayer play – a feature that is glaringly absent from Gas Guzzlers Extreme’s package. No, you don’t need to update your glasses prescription, you read that right. Gas Guzzlers features both a capture the flag and zombies mode, which are single-player only affairs. This lack of multiplayer support seems like a significant missed opportunity that’s especially perplexing given the fact the Xbox One version that we reviewed three years ago included four-player split-screen play.

Caught In A Speed Trap 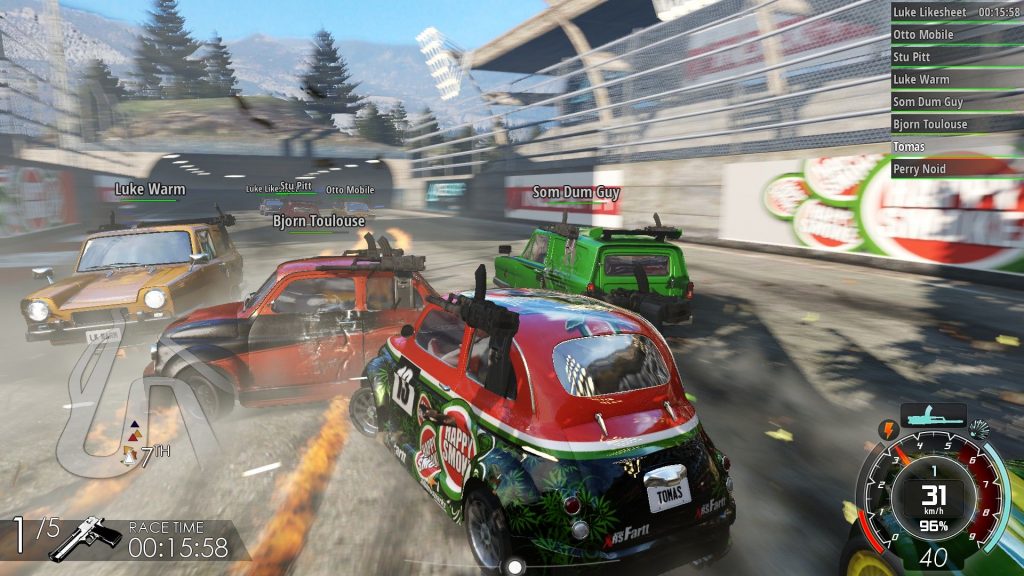 Gas Guzzlers features deathmatch and capture the flag modes, but a lack of multiplayer support, local or otherwise, gimps the experience.

Despite its lack of multiplayer modes, the game’s loop of winning races and buying new cars can be pretty addicting – at least at first. It’s satisfying to see your brand-new jalopy evolve into a veritable killing machine as you reinforce its armor and outfit it with dual rocket launchers or punchy machine guns. However, the rapid rate at which you’re able to unlock these vehicles does make them begin to feel a bit disposable after a while, as many of the game’s 18 unlockable rides seem to handle mostly identically to one another. To make matters worse, while the game features over 40 tracks, they’re all but forgettable. They’re all relatively uninspired variations of desert roads, snowy embankments, and forest-lined speedways that all sort of blend together after the umpteenth time you’ve raced on them.

A lack of variety isn’t the only thing keeping Gas Guzzlers Extreme from going home with the gold. The game also suffers from some rather strange performance issues that rear their heads all too often. The most notable of these problems is the way the game will outright freeze for a solid second or two at a time. This issue mostly happens when you hit an enemy with a weapon or collect a power-up. Now, given the fact this is a combat racer, you probably don’t need me to tell you I encountered this several times in every race during my review period. These frequent stops and starts are maddening and kill the flow of the game. Here’s hoping developer Gamepires can resolve this issue with a patch very soon because it’s badly needed.

With a little more spit and polish, Gas Guzzlers Extreme could have been a great addition to the often-neglected combat racer genre. The controls are responsive, and it offers a nice sense of speed. Still, the lean selection of game modes, frustrating performance issues, and a complete lack of competitive multiplayer make it feel like a glaringly incomplete package. As it stands, it’s hard to recommend the game to all but the most desperate fans of the genre.