Not everyone’s drug of choice 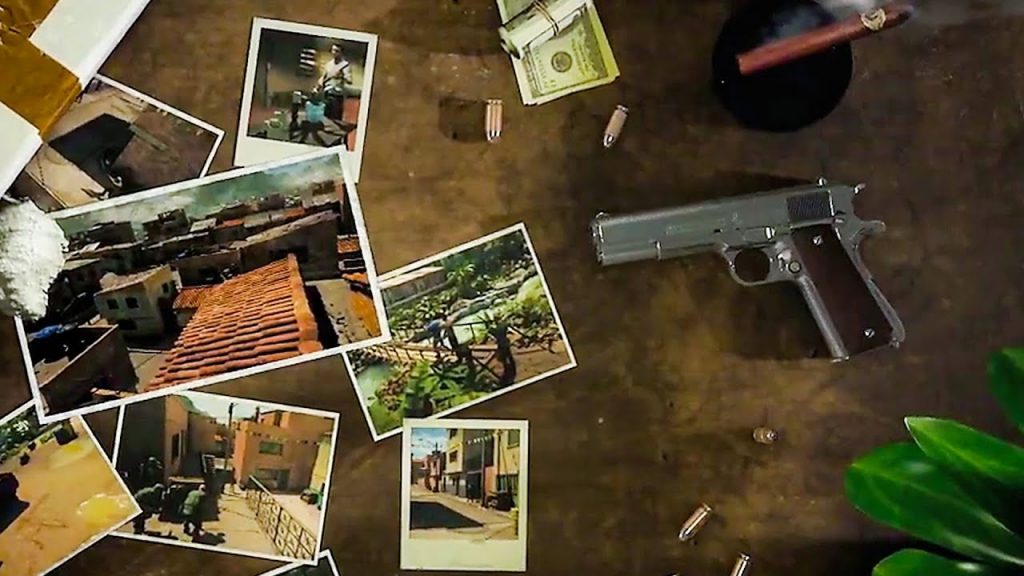 I don’t watch Netflix very often (I’d rather be gaming), but I’ll admit that I was definitely drawn to Narcos. It wasn’t about the drugs or shootouts necessarily — although those aspects certainly were exciting — it was more about the arduous and dangerous process of moving the product from farmer to consumer, with each stop along the way upping the price…and the ante. As my husband and I sat glued to the TV, we chattered excitedly about the video game possibilities Narcos had to offer — he thought GTA, I thought 80 Days. He was more interested in the action potential, whereas I wanted to experience that long, difficult journey cartels made, where choosing a particular route can mean total success or fatal failure.

In Narcos: Rise of the Cartels, it seems we received the former. 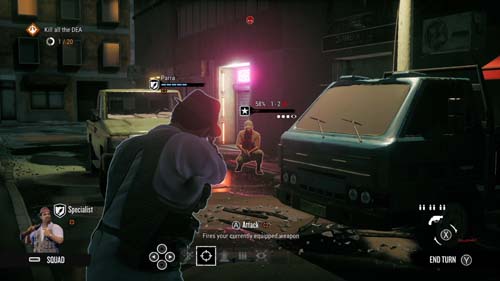 Developed by Kuju and published by Curve Digital, Narcos: Rise of the Cartels is an XCOM-like strategy game where players can play as the DEA or as the Cartel (after putting enough hours into the DEA side, that is). Set in 1980s Colombia, players enlist members into their squads and participate in shootouts right in the streets of Medellin. As the DEA, you’ll need to do whatever it takes to put the infamous Pablo Escobar behind bars; as El Patron, you’ll need to transport your precious cargo while taking down the DEA. Playing both sides of the same map extends gameplay in a unique way without feeling too recycled, and with a storyline that shows all angles, it’s definitely entertaining.

Following the first season of the Netflix show Narcos, players will travel across Colombia, accepting missions to either further the DEA’s cause or to maintain El Patron’s empire. Completing missions means earning money and skill points, which are then funneled back into the squad. Hiring and leveling up squad members means gaining new skills and abilities, like being able to move farther or bringing a first aid kit into battle, so winning is crucial. Of course, if one of your squad members dies after a successful mission, he dies for good, so be careful about progressing if you’ve grown attached to any given police officer, search bloc, DEA agent, etc. 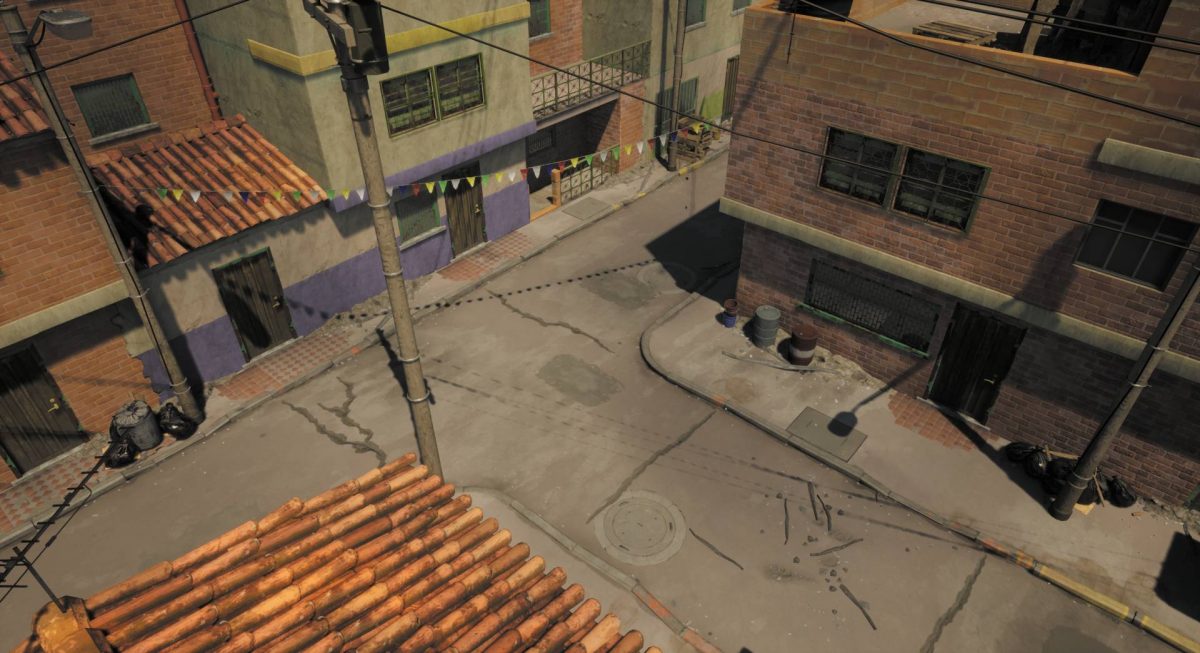 While the controls are straightforward, it’s the gameplay itself that will take some getting used to. I’ll be blunt — it was frustrating to learn that, out of a maximum of five squad members, you can only move one person at a time. Of course, this means that the other side can only move one man at a time as well, so in that sense it’s at least balanced, but the gameplay moves slower and less intuitively due to this choice.

For example — imagine yourself playing as the DEA surrounding a known cartel hangout. If you’re working as a team, you’d likely want to flank an entire building together, right? Two men move to one entrance, two men move to another, and one man gets on the roof of another building to keep watch — all of this during one turn, as squads tend to move as a group, right? 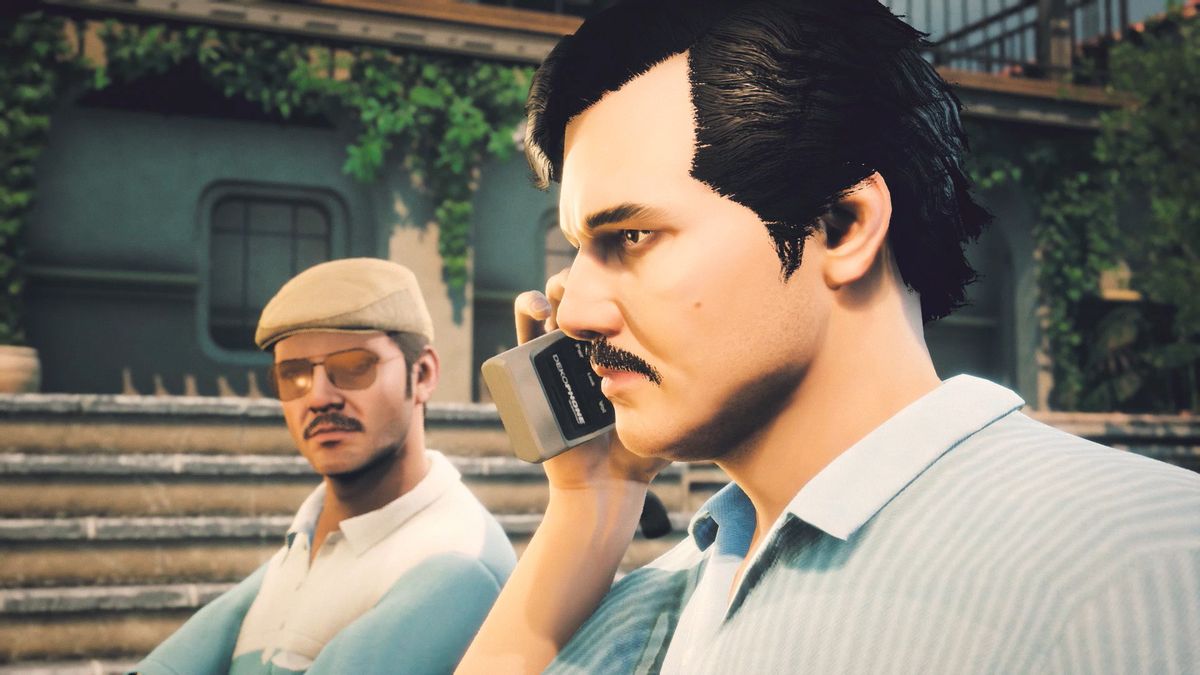 In Narcos: Rise of the Cartels, what often ends up happening is it’s a one-man command, as you can only move one squad member per turn. This means one action per turn as well, so if you choose one person to fire off a few rounds into a baddie, that’s all you get to do. Your other squad members can’t close in on other enemies, they can’t heal themselves — they can’t even reload. If you’ve chosen one guy to move at any given point, that’s the guy you’re likely to use going forward for the rest of the level.

For the most part, I ended up playing as main DEA character Agent Bradley, storming base after base with a shotgun and getting a killshot every time as my team watched from the starting line. Which, not gonna lie, is kind of my playstyle anyway. 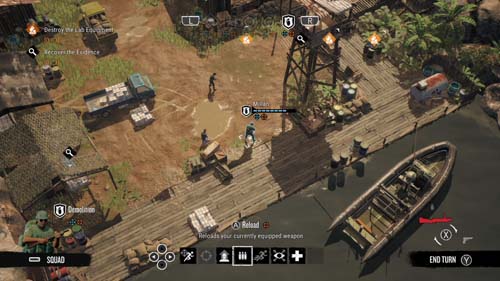 As much as I want to knock it for that choice, I personally feel like it was less of a bad decision and more of an interesting challenge — did it take a mechanic and make it better? No, perhaps not, but it made it different and unexpected, and you gotta give a little bit of credit for boldly running with a weird, not wholly-intuitive idea. It was at least something new, despite it being a little frustrating and taking some time to get used to it. What it contributes to the genre as a whole, however, leaves something to be desired due to this decision.

Worth driving home, however, is that, again, this is a game based off a Netflix IP; as its Steam page states: “Narcos: Rise of the Cartels is a brutal turn-based action strategy game based on the hit Netflix TV series. Explore the entire first season from two sides each with their own unique story.” To me, this translates to something we, as gamers, should all be accustomed to at this point: this is basically a movie-based game, only this time it’s a docu-series. This underlying concept is felt throughout the game, as the narrative is half-rendered, half-filmed, 100% documentary style. 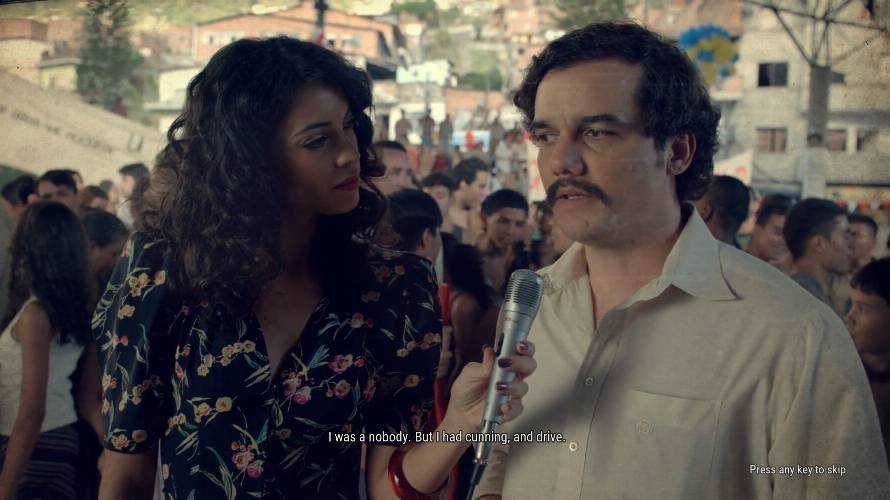 I know I’ve only focused on one aspect of Narcos: Rise of the Cartels, but since it’s *the game*, it carries a lot of weight; honestly, it’s games like this that make reviewers scratch their heads and wonder which hole to plug this into.

For a tactical game, it’s sub-par. But for a movie-based game, where the goal is to re-engage existing fans with the property and drive new fans to the series, it works. It feels like a playable documentary at times and conveys historically accurate information to the player. With my phone at my side, I found myself constantly googling names, places, and terms throughout Narcos: Rise of the Cartels — something I reflexively do as a documentary junkie anyway. To me, it was natural, and expanded my understanding of this scintillating slice of the 80s. 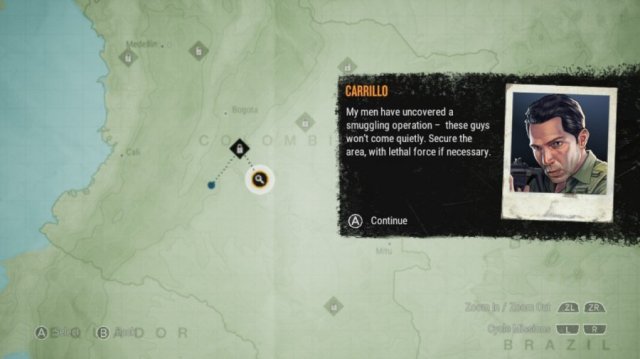 For a not-intuitive tactical shooter, I really thought I’d give Narcos: Rise of the Cartels up after only an hour or so, but I ended up playing it through the night. Usually it doesn’t take long to form an overall picture about any given game, but Narcos: Rise of the Cartels didn’t shine through at first; it didn’t talk to me like other games do. It feels like a reskin, and other games do this tactical-warfare mechanic much better, but as a fan of Narcos, it…made sense. It played through the first season of an extremely riveting show, as promised, and extended engagement with the druglord docu-series. At the end of the day, Kuju developed a decent game that achieved Netflix’s goals and even taught me a thing or two about this often hush-hush side of history. And for that, I applaud it — it’s a job done well enough.

Narcos: Rise of the Cartels had amazing potential. On Netflix, we learned that there was so much more to the drug trade than gunfights, but in-game, that’s all we got. And in those televised gunfights, squads worked as a team to take down the bad guys, but I did it single-handedly with a shotgun and a first aid kit. Am I let down? No, not really — again, as a documentary junkie, I have long-dreamed of the day when documentaries would be seen as sexy, engaging, and exciting — but Narcos: Rise of the Cartels relies on players who love squad-based tactical gameplay to bolster their sales, and I can’t say they’ll be as forgiving as I am. If you’re up for a challenge and are a fan of true-history whose thirst for knowledge can never be quenched, I daresay you’ll like not only Narcos: Rise of the Cartels but Narcos itself; for everyone else, watch a few let’s plays before investing in this virtual nose candy, as the counter-intuitive gameplay may be a deal breaker for you.

Full disclosure: This review is based on a Steam review copy of Narcos: Rise of the Cartels given to HeyPoorPlayer by the publisher