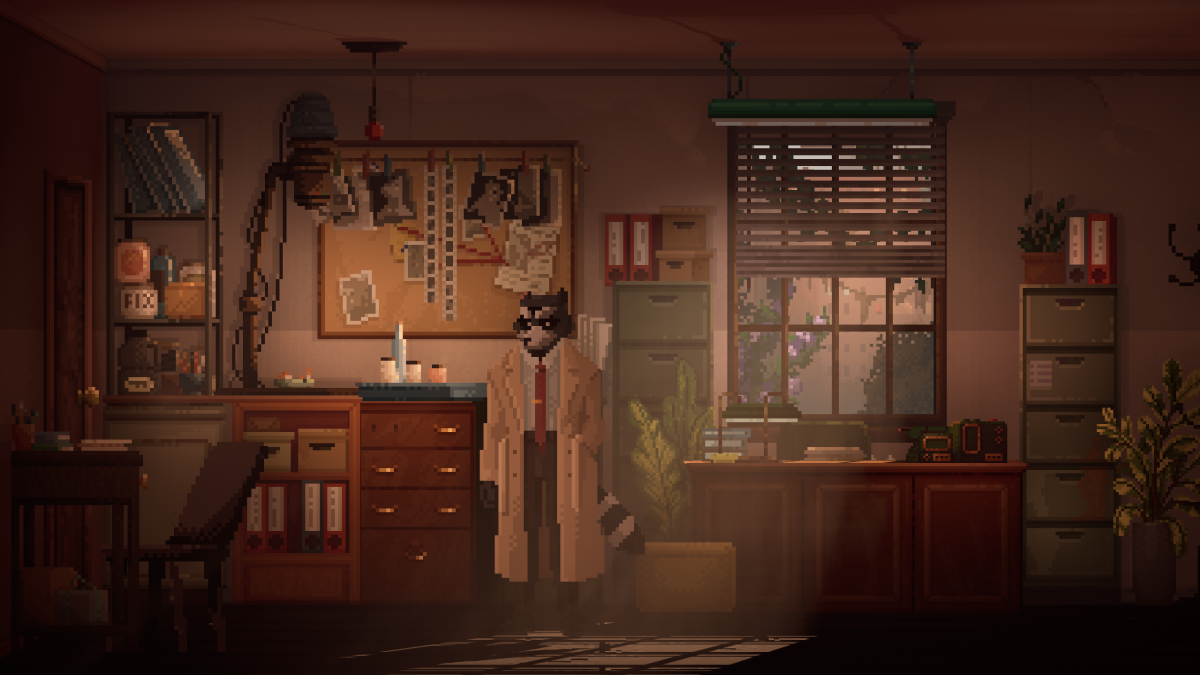 It’s not easy being a PI; sometimes a dame waltzes in and spins a yarn that seems straightforward, but ultimately takes you down a shadowy path. A path so dark, it needs two creams and two sugars before other folks can even consider drinking it. But Detective Howard Lotor isn’t like other folks. He takes his coffee black; his cases peculiar. Follow him as he takes that shadowy path leading down the rabbit hole as he unravels the case of the missing husband, where he’ll find much more than he bargained for.

So begins Backbone, a pixel art noir dystopian detective adventure (say that five times fast!). Developed and published by Eggnut, the highly anticipated indie title raised a little over $70,000 USD on its kickstarter page last year with a tentative release date of “2020” for Windows, Mac, Linux, PS4, Nintendo Switch, and Xbox One. 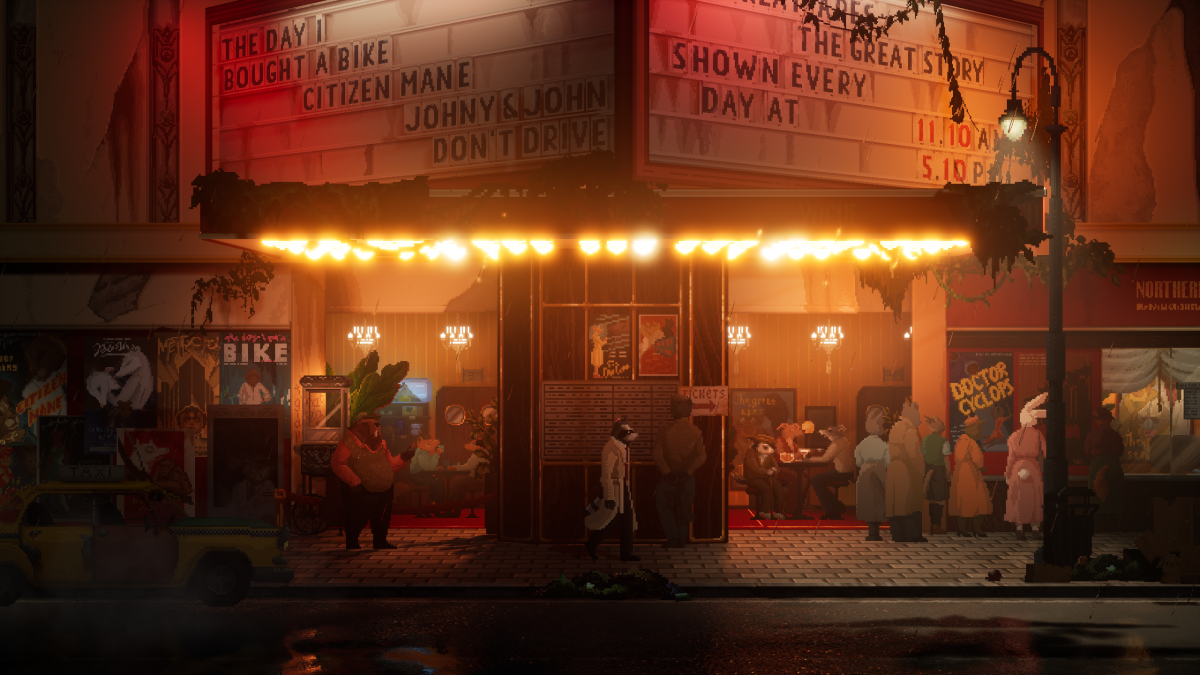 The story follows Howard Lotor, a lone raccoon eking out an existence as a private detective. His digs aren’t fancy by any stretch of the imagination and he could certainly benefit from a little self-care, but times stops for no mammal, and mysteries need solving whether or not this trash panda’s apartment is clean. Such is life.

This is most certainly the case when his next client comes in, a housewife looking for her husband. She’s not sure of his fidelity or even his whereabouts, but she just wants some closure. Some dialogue options prompt the player to dig deeper into her affairs or stay on the course of what’s absolutely necessary; either way, it’s sleuthing time. 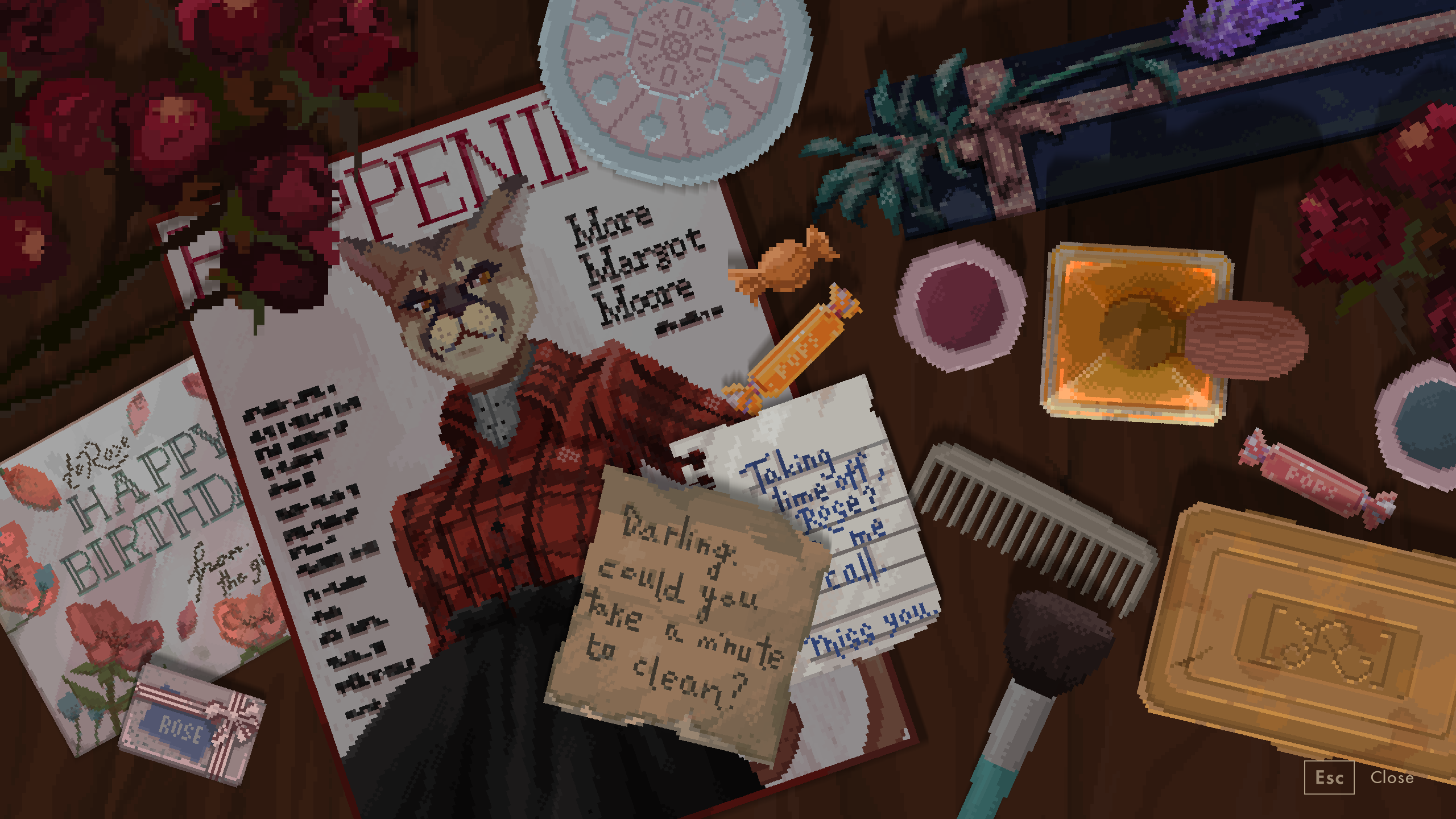 Players are then thrown into the beautifully depicted grimy city of a dystopian Vancouver, where each building, stoop, and alleyway have something to offer. Walking (or briskly jogging) from one end of the street to the other offers a look into not only into a variety of different leads, but different class systems — one minute, you’ll be brushing shoulders with bankers and businessmen where the next you’ll be out in the cold with the homeless. It’s nuanced, but it’s realistic — once you see it, it’s definitely sobering.

Of course, Lotor isn’t here to end systemic injustices per se — he’s on the hunt for a missing husband, who was last spotted in the hottest club in town. Getting in won’t be easy, but by sweet-talking the right people, you’ll be able to get past the bouncer and into the exclusive establishment. Naturally, this is where the real fun begins. 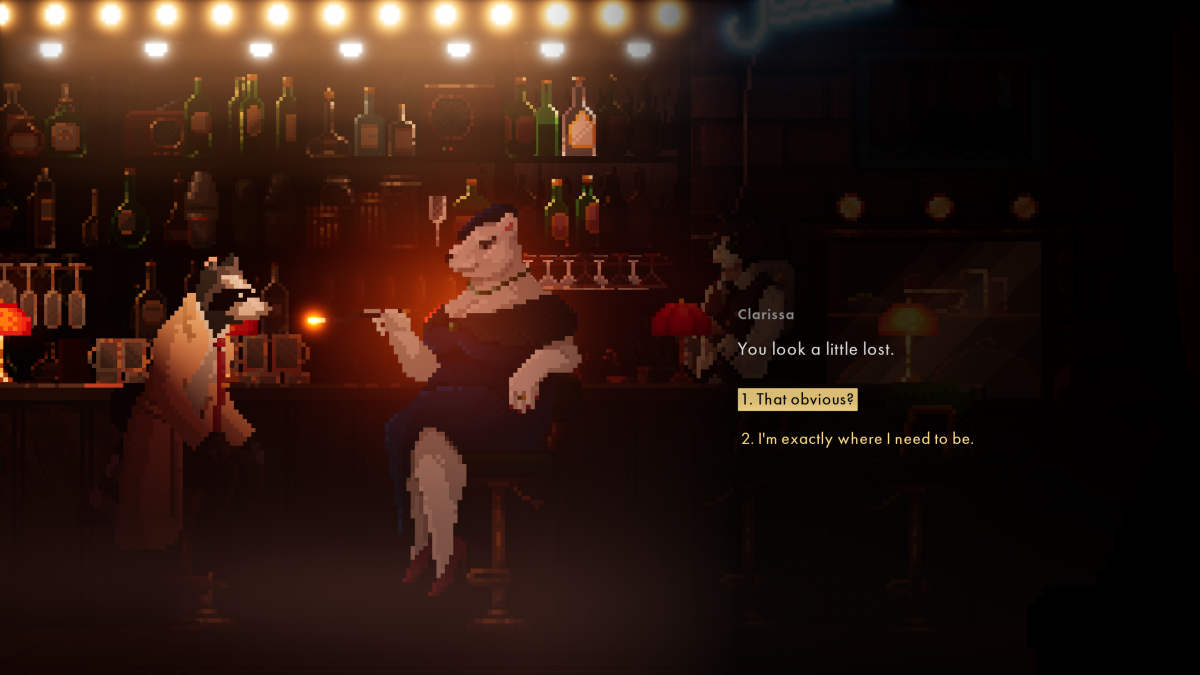 I won’t continue spoiling the story, as Backbone has a totally free (and totally fun) demo for those curious; instead, I’d like to focus on a few of its triumphs.

For one, that sweet, sweet pixel art is just doing it for me, and when it’s paired with noir detective games, it really shines. Where Backbone really stands out in this particular instance is its lighting — it dark, gritty, and wonderfully moody without compromising the player’s ability to see key details. That’s a tremendous victory and shows just how artfully skilled the dev team is. 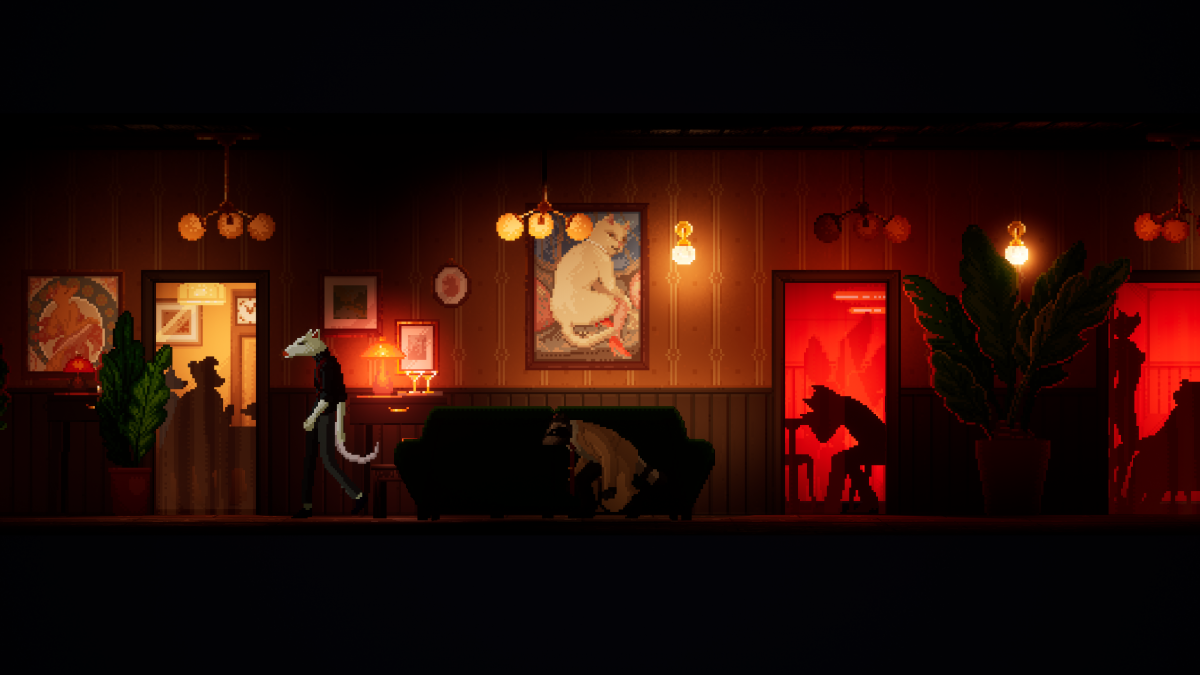 Next up are the puzzles featured in Backbone, of which there are plenty. None of them are too challenging, but none of them are all that simple, either, and the variety for the first level is appropriate. Some are all about skill, like tiptoe-ing around without getting caught, while others are code-breaking which are a bit more cerebral. Still more are in the dialogue options you choose, yielding in Lotor getting into places the easy way or the hard way. All of them play into a cohesive, entertaining experience.

Then, of course, the music, which matches the brooding, saturnine tone. Backbone features a wonderful noir soundtrack that simultaneously sets a somber stage while giving me plenty of anxiety (in a good way). Keeping the game idle for a bit really transported me to a rare, rainy day in LA, overcast and gloomy, with an imaginary cigarette and coffee in hand. It was glorious. 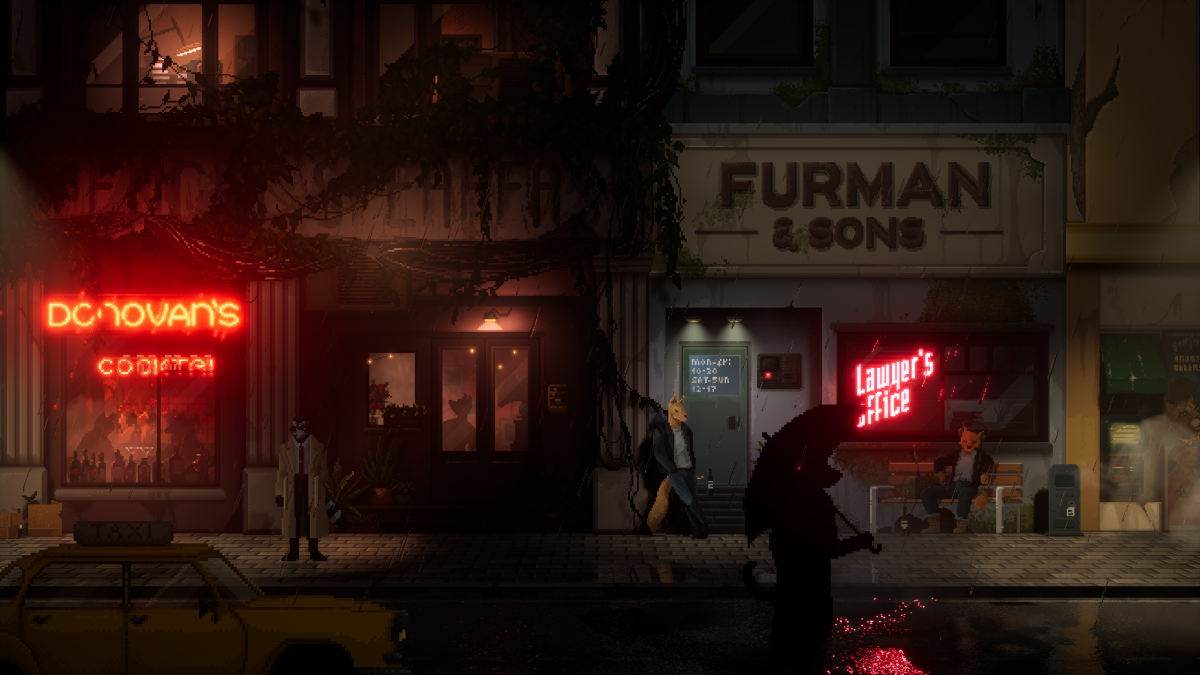 For anyone who loved LA Noire or Darkside Detective, I really can’t recommend this game enough. With a coveted “Overwhelmingly Positive” rating on Steam, the demo promises to delight anyone who is even remotely interested in pixel art noir detective games and has about an hour to kill. Help Backbone’s trash panda PI solve the case of the missing husband, but do so at your own risk, knowing that a massively intriguing cliffhanger awaits you, teasing a supremely scintillating story just around the corner.

Those who feel like solving the mystery themselves can play the free demo; those who want to review case notes before crawling down the rabbit hole can wishlist Backbone on Steam.