The Bergsons are back — this time, it’s console. God, what a beautiful game.

From the outstanding use of color to the glorious animation, the magical storyline to the focus on family, and the slight shift in delivery without compromising the basics of the genre, Children of Morta absolutely and unequivocally delivers, and the Nintendo Switch is the perfect place for it.

Previously released on Steam on September 3, Children of Morta makes its way to consoles on November 20, a move fans have been waiting for ever since the game’s very successful kickstarter. Those who haven’t already played this absolute work of art on its original platform and have been waiting for the perfect moment to grab their copy can now rejoice, for the Nintendo Switch is the perfect place for this pixelated masterpiece.

Our story begins with the visually stunning world being thrown into chaos — Bergson matriarch Margaret feels the disturbance, so she seeks answers from the shrine of Rea-Dana. Unfortunately, the goddess doesn’t yield anything, which concerns Margaret greatly. As the head of the family which guards the land, she decides to send her son, John, to investigate the shrine of Rea, deep within the forest. It is here John discovers the Corruption is taking over Rea — the long-forgotten land of unimaginable beauty — and it is here that John and the rest of the Bergsons understand their fate: to save their home from destruction.

So begins Children of Morta, the rouge-like dungeon-crawler that simply oozes with personality. Players will initially take on the role of John, the pell-mell papa and man of the house, but will soon find themselves needing the entire Bergson clan to defeat the Corruption. Saving the homeland is a family affair, and if the Bergsons of old were able to do it, the next generation will surely be up to the task as well. At first, it’s up to John and Linda, the eldest Bergson daughter and archer extraordinaire, to crawl through procedurally-generated dungeons in order to secure the three spirits of Rea and travel to the top of Mount Morta. The clan does this via the Sanctuary, given to the Bergsons of old by the goddess herself, and a precious gemstone, which allows the fighting family to return to base should they be on the brink of death. Returning home in-between dungeon runs is a good thing, as the heroes will be able to upgrade their skills, discover new information about their foes, encourage other family members to take up arms against their enemies, or simply spend quality time together.

Controls are intuitive, which is critical for a rogue-like game — the main buttons you’ll be mashing are “y” and “x” for the main attack and special attack respectively. The left shoulder button will allow players to block enemy attacks, and the right shoulder button will use up items you pick up along the way, such as special moves in the form of divine relics. Since the dungeons are proceurally-generated, there’s no guarantee that you’ll find divine relics, charms, or other items at any given stage, so the key is to “git gud” at the base attacks while hoping for a little bit of luck in terms of items — my personal favorites were the auto-healers, which really came in handy during the beginning grind. Speaking of grind, there’s plenty of it — be prepared to enter the same portal over and over again as you die, duck, dip, dive and die. Notably, dying doesn’t mean a wasted run, as you’ll be able to take all the gold and experience you earned with you as you’re transported back home. It’s here you’ll be able to level up your Bergsons, as Uncle Ben offers upgrades in the way of higher attack stats, more health, and speed increases. Eventually, even Margaret will be able to offer assistance through upgrades that affect the items you pick up during your travels, really driving home the notion that defeating evil is a team effort that the whole family takes on.

While on the topic of dying, one thing I truly appreciated about Children of Morta is that the storyline progresses even if you died — win or lose, a cutscene is delivered to players upon their return home. This gives the game a more realistic feel, in my opinion; instead of pretending that the countless failures didn’t occur and that the one successful run is true canon, Children of Morta understands perfection isn’t likely, weaving the unsuccessful dungeon crawls into the story instead of stagnating based off player ability. It’s truly unique. 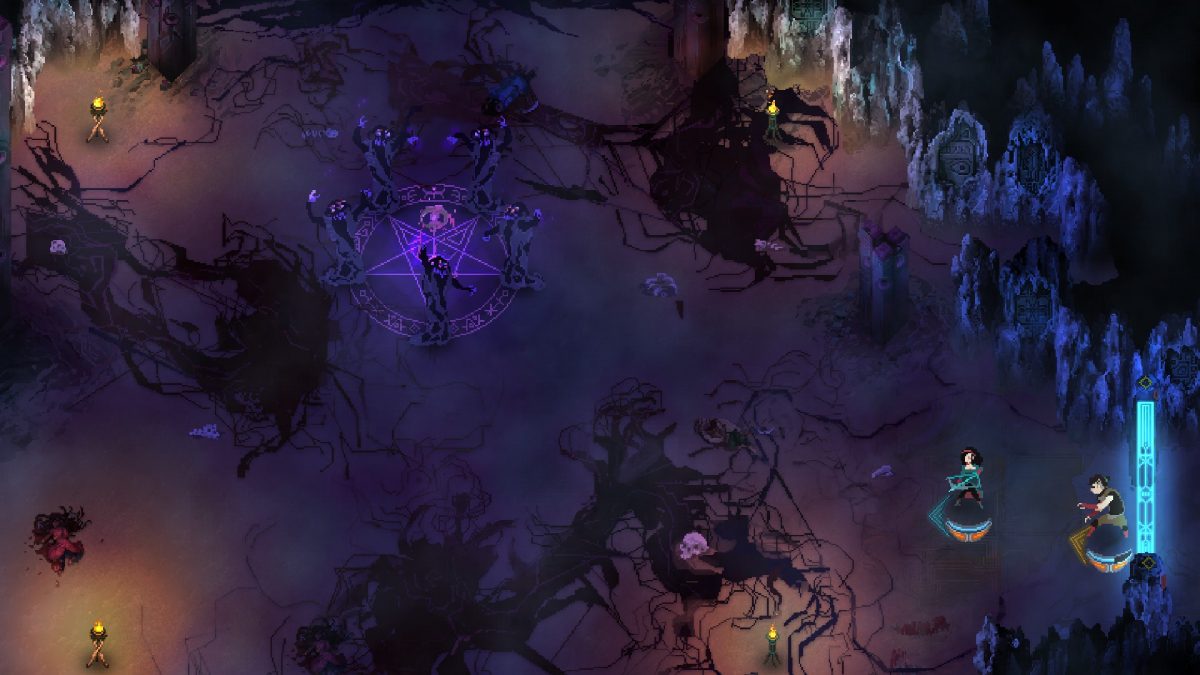 Although the story itself isn’t wholly new — a familiar evil taking over a mythical land — the focus on how the family reacts to it and interacts with each other feels fresh. Instead of greatly expanding outwards with convoluted twists and turns in story progression, Children of Morta turns inwards for inspiration, shining a spotlight on each individual family member, their motivations for taking up arms, and their group dynamics as they deal with dark forces attempting to tear apart what’s truly dear to them. Putting emphasis on character relations over the standard hero’s journey turns what could have been a tired story on its head, and instead of feeling like an invincible juggernaut taking enemies to town, I feel constantly reminded that there’s someone worried about me back home.

Where the storyline and mechanics truly feel as one are in the character fighting types — as in, you’re going to need all of them in order to succeed. As someone who tends to play tank characters (even in Skyrim), it felt natural for me to go all out with John, a sword-wielding melee specialist; however, it became apparent pretty quickly that the first boss was going to require archer Linda’s attention, as a long-range strategy was necessary. As other family members join the fray, you’ll find they all possess different strengths and weaknesses that complement each other, meaning going through the entire game with just one Bergson isn’t an option. This reinforces the underlying theme of Children of Morta and shows that saving Rea truly is a family affair. 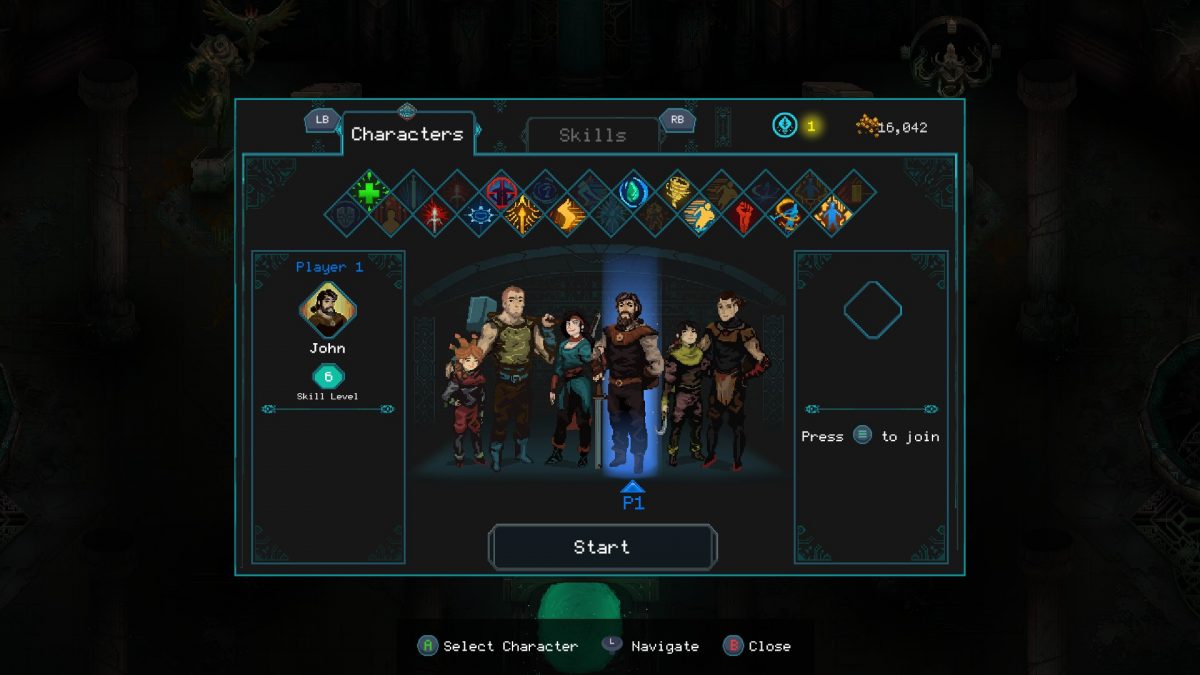 While Children of Morta’s pixel art itself is an absolute visual treat, it’s the animation that is truly divine. I am not sure how the dev team accomplished the exquisite, magical movement or the vivid, otherworldly colors, but whatever they did, it’s dopamine-inducing eye candy that will, without exaggeration, completely blow your mind. Not a single hue is misplaced — everything that needs to be crisp is incredibly vibrant, and everything that needs to feel natural is pleasantly calming. After an exhausting and often unsuccessful dungeon crawl, I looked forward to seeing the Bergson’s home again — imbued with a mystical force with supernatural colors swirling through the wooden manor, it was a welcome sight indeed.

Although the story progression told through relaxing narration definitely awakens something familiar and comforting from deep within, it’s slightly dampened by the sheer amount of grind required to move forward. After watching a few videos on my laptop to see how other players had dealt with certain enemies, I found the visual experience to be ever so slightly different — for some reason, the magic was lost on a bigger screen, and I felt less connected to the Bergsons than I had on my Switch. Picking up my beloved handheld to try again, playing in my comfortable bed just before turning in for the night, I felt my experience with Children of Morta was greatly enhanced on this platform. There are just some games that belong on a handheld console, and Children of Morta is no exception — if you’re on the fence about which version to pick up, I can safely say that the Nintendo Switch does it best when it comes to controls, visuals, and overall player experience.

If you’ve already saved the land of Rea on your PC, you should still pick up Children of Morta for the Switch to become even closer to the Bergson clan. For those who haven’t yet taken the plunge, Children of Morta most definitely belongs in your Switch library. If you need a reason to justify the console’s purchase or are simply ready to fall in love with your handheld all over again, this is the game that will do it for you. Defeat the Corruption without leaving the comforts of your cozy bed — after all, the Bergsons would agree that there’s no place like home.

Editor’s note: This review is based on a retail copy of Children of Morta given to HeyPoorPlayer by the publisher. 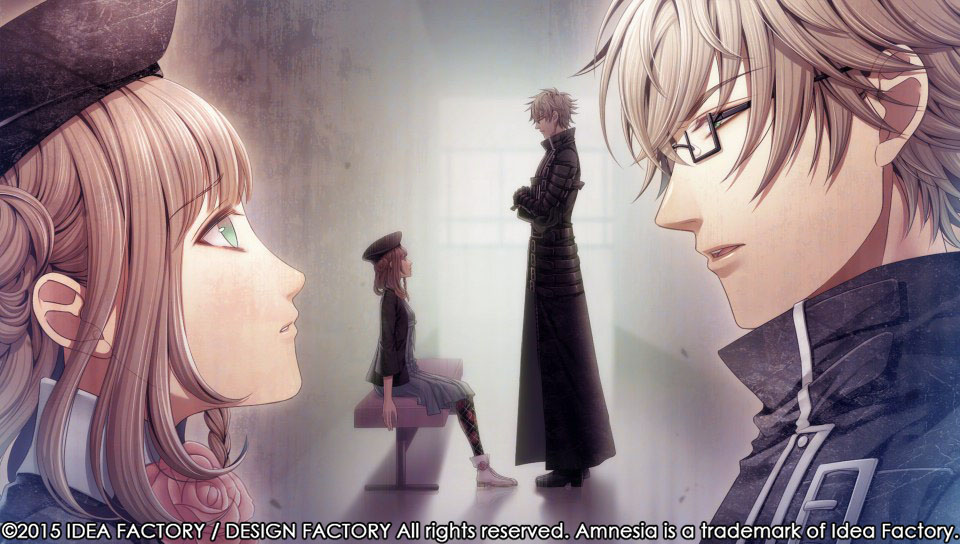 Take a trip through space, time, and…relationship management? Take a minute, and think about your romantic history in terms of dating. Who have you dated? How long was the…